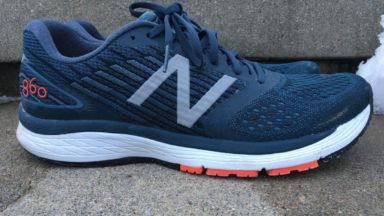 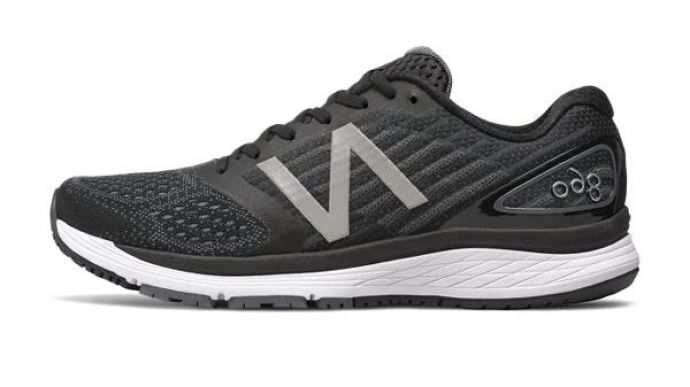 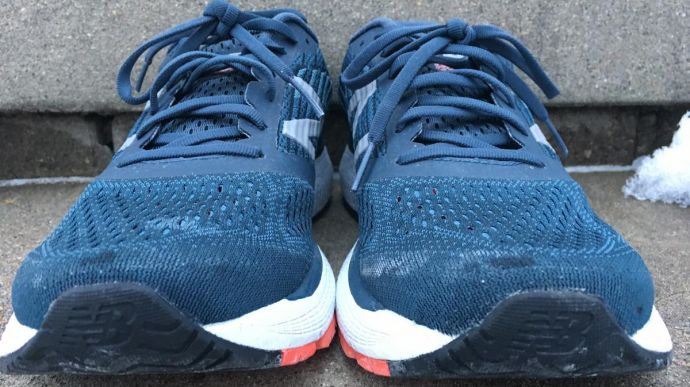 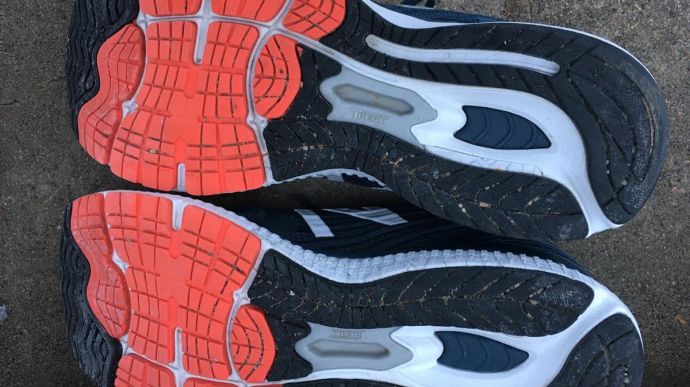 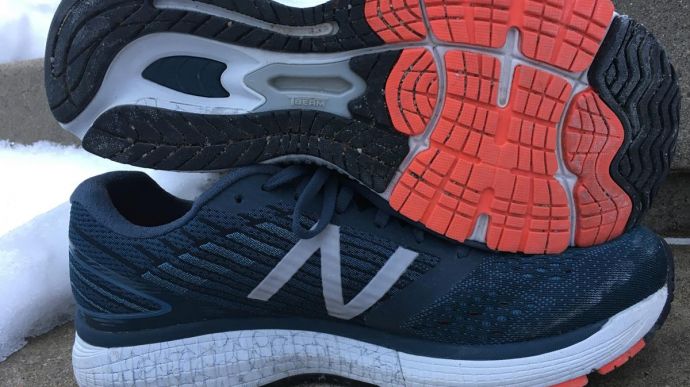 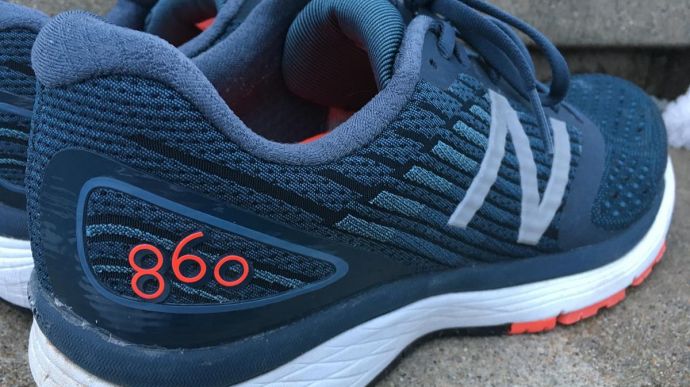 The New Balance 860v9 is a moderate stability trainer that has undergone an impressive visual redesign. They are a good stability trainer, but have a few shortcomings which prevents it from being a great daily trainer.
WHERE TO BUY
LOWEST PRICE
$125
SHOE INFO
New Balance
Brand
860v9
Model
Stability
Type
11.5 oz. (326 gr.)
Weight
125 US$
MSRP
10 mm
Heel Drop
WHO IS IT FOR
A runner who is looking for a workhorse of a stability trainer and ready to put on the miles.
Help me choose

The 860v9 falls in the middle; it is a tried and true stability shoe with updates to keep it fresh and effective. New Balance focuses on the type of ride, not just cushioning, in each of their stability trainers.

The 860v9- v9 meaning ninth edition – is one of New Balance’s flagship stability shoes. It offers a moderate amount of stability.

The 860s retail for $125. This puts them in competition with the Mizuno Wave Inspire, Saucony Omni, Brooks Adrenaline, and Nike Zoom Structure. ON Cloudflyers and Saucony Guides provide comparable, medium stability and cushioning.

I enjoyed the colorway and design of the shoe as soon as I opened the box. The majority of the shoe is petrol (a bluish green) which makes it look unique. One change I would of have welcomed is more accents of flame (orangish red) on the upper.

The N logo on both sides of the shoes pops and is extremely reflective. The inner and outer sides of the upper is symmetrical, something that is becoming more uncommon in today’s running shoe market.

This symmetry adds another layer of appeal to this shoe. This is my first pair of New Balances. The firm and responsive cushioning caught my attention when I slipped them on.

The arch was an area of snugness for me while the toebox was wide and deep. It hugged my heel with a generous amount of cushioning.

My first run out of the box was a relaxed 6 miles on paved city trail. It was a responsive and firm ride from start to finish.

The midsole unit the 860v9 is both cushioned yet firm, something they haven’t changed it from the 860v8. It is a TruFuse midsole, which has two types of foam along with a dual density medial post.

This provided me with a firm but stable ride throughout all of my runs. The firmness softened after a few runs which made the shoe more enjoyable to run in.

The medial post in the 860v9 runs from the balls of your foot to where the shoe starts to curve around your heel.

The length of the post help with the support it provides by distributing the support along the side of the foot. The amount stability provided by the 860v9 would be ideal for mild overpronators.

I felt the midsole absorb the impact of my foot strikes effectively, but struggled to return the energy on my toe offs because of the firmness.

The 860v9’s midsole has a lower profile, which helps counteract the lack of energy return felt. The lower to the ground my foot was the more leverage I was able to get when my foot transition from midfoot strike to toe off.

The bottom of the New Balance 860v9 has blown rubber outsole. I found the outsole handled all weather conditions I ran in, from dry to snow and ice. It also provide the shoe with the right amount of flexibility and durability.

There are a few changes to the upper of the 860v9. The mesh in the forefoot has been tailored to be more breathable and comfortable.

While this is true I found it to be almost too breathable to make it a four season trainer.

There is a series of openings on the small toe side of your foot, where you can see the color of your socks, which allows a great deal of cold air in when you are running in the winter.

The midfoot of the upper underwent a visual design and reconstruction from the 860v8. There are fewer overlays and a slightly different stitching to tighten up the fit.

These small changes achieved their desired results. It took me a few times of tying them to get the proper fit and feel. Because of the seamless application of the upper, there are no points of irritation.

The heel collar has a generous amount of cushioning along with the tongue. The cushioning is soft which means it is adaptable to your achilles and the top of your foot. This cushioning work well with the heel counter they have in place.

The 860v9 narrows in the midfoot, I found this to be slightly uncomfortable at times. The arches is where I felt it the most.

The toebox widens out and allows for the toes to completely splay out as your stride transitions from heel/midfoot to the forefoot.

This help counteract the lack of energy return I was feeling. Having more area in the toebox made it easier to push off every stride.

As a runner one aspect you look for in a running shoe is consistency. You want a shoe which will leave you with the same satisfied feeling after every run.

The New Balance 860v9 struggled to give me that satisfied feeling after every run in them. Some runs felt fantastic while others left me disappointed.

The New Balance 860v9 are a firm and responsive ride which takes some miles to have them feel like they are broken in. I found the medial post effective in providing me the stability I needed on my runs.

They absorbed the impact of stride but I found a lack of energy return during my toe offs. This cause my legs to be worked a little harder.

This became more evident the longer the run was (especially in double digits). The lower stack height of the heel and forefoot did help combat this lack of energy return.

The visual redesign of the New Balance made the shoe look more traditional along with improving the fit of the shoe.

New Balance running shoes looked shiny cheap to me in the past, but the redesign made the 860v9 look timeless, traditional, and higher quality.

This paired with the lower profile and cushioning in the heel area of the shoe made this a valuable update.

Since I was reviewing these in the middle of winter in the midwest I knew they were going to experience the elements.

I found out quickly these were a bit too breathable in the winter because of the number and locations of the openings in the forefoot. This was one of the first pairs where I experienced my toes struggling to warm up.

On the other hand, this would mean they would make fantastic shoes to run in during the summer months.

I experienced some snugness in the arch area of the foot in these. It was a bit uncomfortable for a run or two but then it wasn’t an issue anymore.

The toe box was a positive aspect of the upper for me. It held my feet but also allowed my forefoot to spread out and truly give me space to toe off.

The New Balance 860v9 grew on me throughout my review. The runs slowly become more enjoyable as the shoes were broken in.

Sadly, there were aspects, lack of energy return and too much breathability which prevented it from being a great shoe.

On the flip side, there are positive aspects of this shoe, the stack height, once broken they grow on you, and visual redesign.

For some the New Balance 860v9 will be their workhorse that gets them through runs day in and day out. For me, they were inconsistent trainers who I would run in occasionally but would not make them my daily trainers.

We purchased a pair of New Balance 860v9 from runningwarehouse using our own money. This did not influence the outcome of this review, written after running more than 50 miles in them.