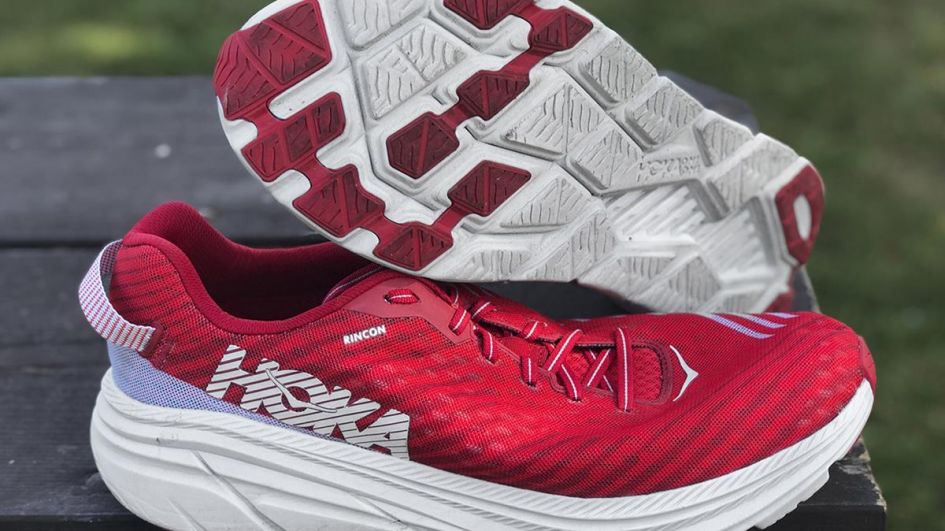 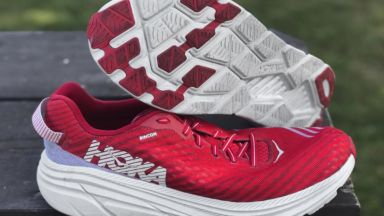 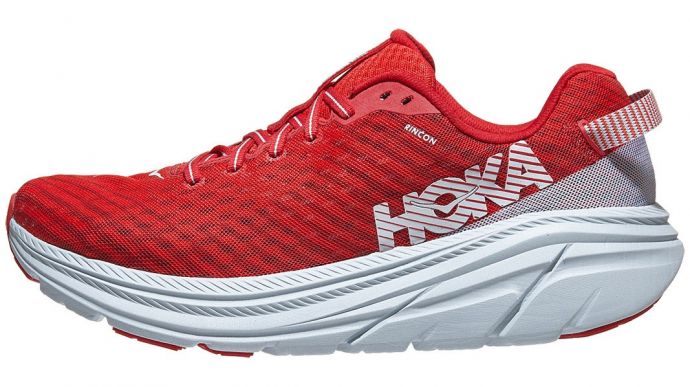 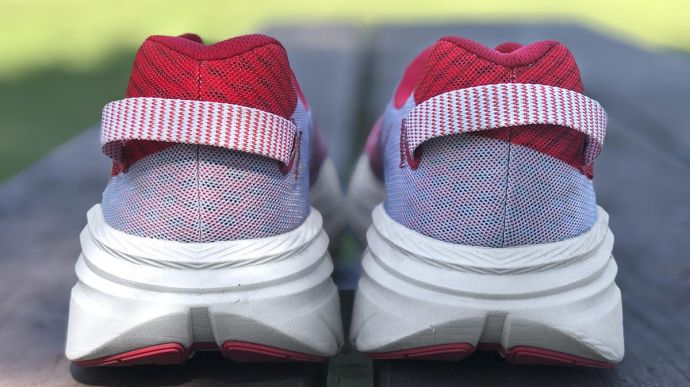 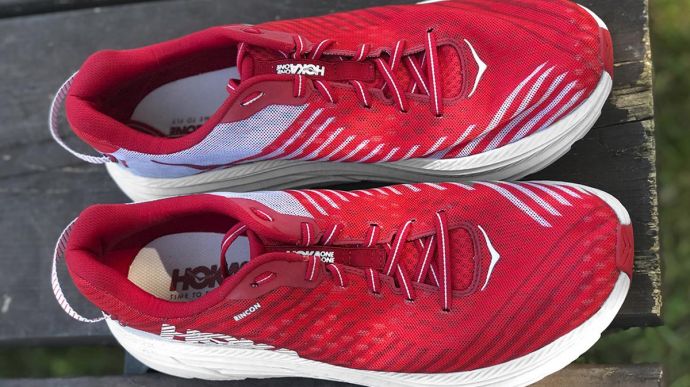 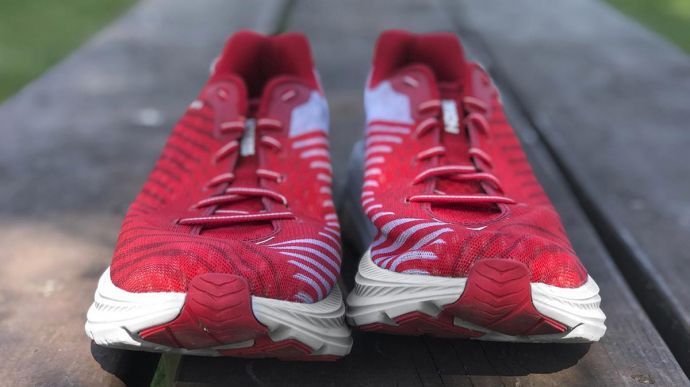 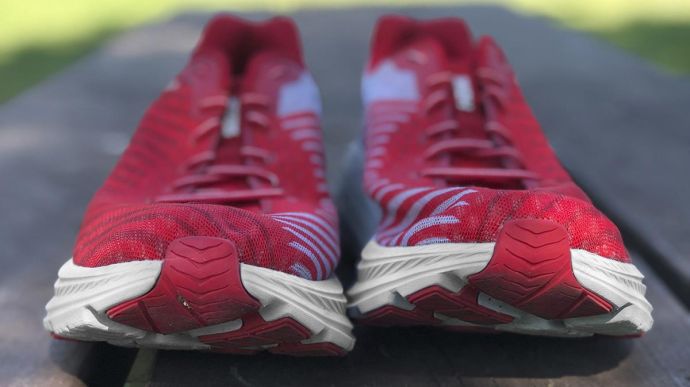 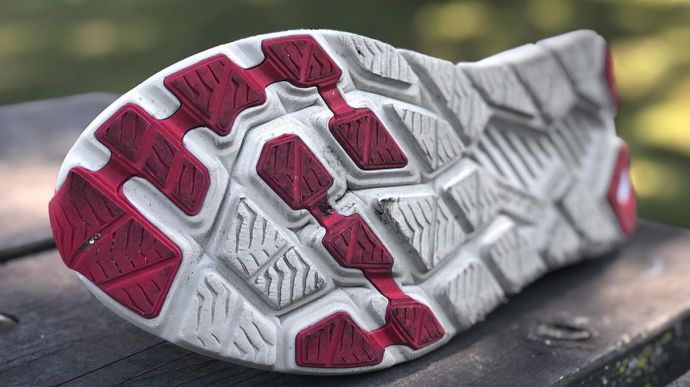 The Hoka One One Rincon quickly became one of my favorite long-run shoes. The combination of lightweight while also providing such over-the-top cushion is truly a joy for the long run.
WHERE TO BUY
LOWEST PRICE
$0
SHOE INFO
Hoka One One
Brand
Rincon
Model
Lightweight
Type
7.7 oz. (218 gr.)
Weight
115 US$
MSRP
5 mm
Heel Drop
WHO IS IT FOR
This shoe is for anyone looking for a light, but max cushioned option for long-distance training.

This shoe would be good for beginners and experienced runners, so long as you can deal with a lower heel-toe drop of 5mm.
Help me choose

Hoka One One Rincon Intro

Hoka One One is a brand that is well known for their over-the-top cushioning, and across most of their lines, they deliver on this promise. This promise of high cushion is what draws people to the brand year after year.

And over the past few years, they have revamped their lines to make them more comfortable than ever.

At $115, the Rincon is one of the cheaper options made by Hoka, and yet they do not skimp on the plush feeling or technology you could want in this running shoe.

At this price point, the Rincon will compete against the likes of the New Balance FuelCell Propel and Zante Pursuit, as well as the Saucony Kinvara and Ride ISO, Skechers GOrun Ride 8 Hyper, Mizuno Wave Rider, Nike Pegasus, ASICS Cumulus.

Although all of these competitors are in the in the same price point, not a one of them compares in the level of cushion you will receive.

Hoka One One Rincon First Impressions

Hoka One One Rincon – Pair

When the Rincons showed up, I was really excited. It had been more than 5 years since I last tried to run in a Hoka.

At that point the two different models of Hokas in which I ran both were too tight in the upper (especially in the toe box) and caused blisters on my feet.

But with the new materials, and designs, I had been informed that this was no longer an issue. So I wanted to see an offering from them again.

When they showed up, I was happy with the look. Although they have the signature Hoka giant sole, it didn’t seem over-the-top on this model, they just look slick.

And the bright red of the colorway was exciting from the start. When I actually put them on, they were a dream. The sole was soft but supportive, and the upper was soft and flexible.

They just felt right. And when I took them out for an all-day test, my feet loved me for it. They were great.

On the first run, I was taken aback by the technology on it, and especially by the way it propelled me forward while staying lightweight.

My first run in them was for 7 miles and was soft and energetic the entire time. It was a great first impression, and high promises for what was to come.

Hoka One One Rincon Sole Unit

Hoka One One Rincon – Medial Side

Everyone knows the look of a Hoka on someone’s feet when they see them. They are distinctive for their size and shape. The Rincons fall into this category.

No one will mistake that you are wearing anything other than a Hoka — with a stack height of 32mm in the heel and 27mm in the forefoot.

That 5mm drop can take some getting used to for some runners used to the traditional 10-12mm drop of the flagship offerings from most of the name brands.

Hoka uses a full-compression EVA material in the midsole to provide the high-level of cushioning you’d expect from that stack height.

However, beyond just the material, one of the other parts of the Hoka design that stands out is the shape of the midsole — in a pronounced rocker with an aggressive upturn to the toe box.

This rocker helps transition you from your impact point (whether heel or midfoot) to the toe-off. And with the aggressive upturn on the toe box, the shoe glides and pushes you through your gait.

Hoka One One Rincon – Sole

On the outsole, the company doesn’t want to weight down the shoe and thus does not use a full layer of rubber, opting to put them strategically in impact and toe-off areas.

This lightweight rubber had decent traction, but you definitely feel the lack of traction on the rest of the outsole when the cement is wet.

Hoka One One Rincon Upper Unit

Hoka One One Rincon – Lateral Side

The upper of this shoe is where I was the most worried prior to its arrival. As stated before, the previous two models of Hokas I wore both gave me blisters on the balls of my feet.

This was all due to the upper and the construction of the shoe. However, in the past couple of years they have completely revamped the way in which they design their uppers.

Gone are the rigid overlays that rub against your feet, and instead used is a soft, single-layer mesh. This mesh is supremely breathable — to the point where I worry about use of these shoes in cold times — and incredibly light.

Sticking with that theme, the tongue on the upper is super slim and almost as breathable as the rest of the upper. This is both good and bad. If you like a flexible, lightweight feel, this will hit the mark.

However, the tongue offers almost no protection from tight shoelaces or anything making impact with the top of the foot.

This upper is shaped much better than earlier Hoka models, and although still on the tight side, it offers a lot more room than before.

It is true-to-size in my size 13s in length, but more importantly it is more realistic about the width of someone’s foot in the toe box.

It starts with a comfortable, and slightly tight heel with an awesome pull tab to help with easy on. Then this moves into a slightly wider, but still tight midfoot which locks your foot in.

At this point it opens up a little (not a ton) in the toe box to offer a comfortable and flexible ride. This toe box will not be confused with an Altra or Topo, but there’s enough room in there that your feet don’t feel trapped.

Hoka One One Rincon Conclusion

Hoka One One Rincon – Heel

In the end, I was really looking forward to these shoes after hearing all the good things about Hoka One One in the past couple years. I was impressed with what I was given and really wish I could have ran in these more.

Unfortunately I got injured and had to wait to finish my test and have thus only put around 60 miles on them. I plan to keep using them as I get back into training and start logging some longer miles.

The long run is really where these things shined. They held up great and offered a wonderful amount of cushion when you are out there for hours pounding the pavement.

The longest I got in them was 12 miles, but they felt as good as any shoe I’ve put through that distance. They were still as light and energetic in mile 12 as they had been in mile 2. That is not always the case with this type of shoe.

Although great for the long run, they were no slouch for tempo runs as well. With the energy return and upturn in the toe box, they will push you forward if you decide to up the pace.

However, unlike the New Balance FuelCell, they won’t force you to up the pace if you don’t want. They are just as happy going on a Long-Slow Distance run as they are sustaining a high pace.

Beyond that, I feel these shoes would be a great race-day shoe for half marathon or full marathon lengths.

We purchased a pair of Hoka One One Rincon from runningwarehouse using our own money. This did not influence the outcome of this review, written after running more than 50 miles in them.

Hoka One One Rincon Price Comparison

Similar shoes to Hoka One One Rincon