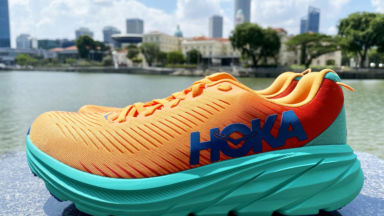 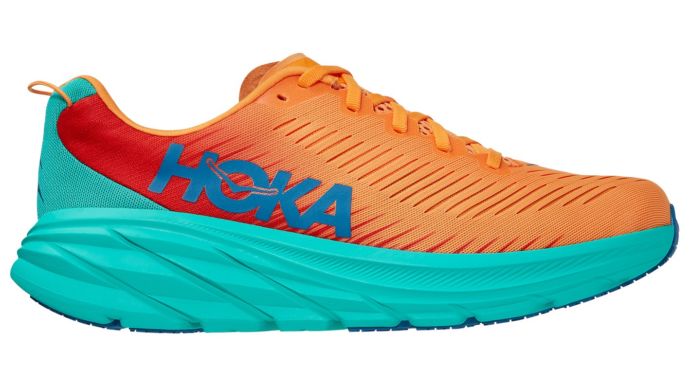 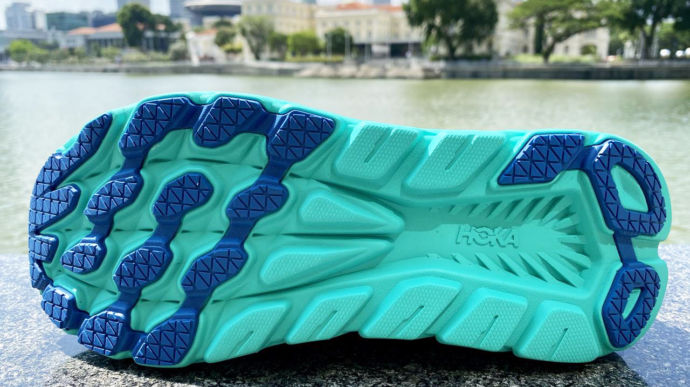 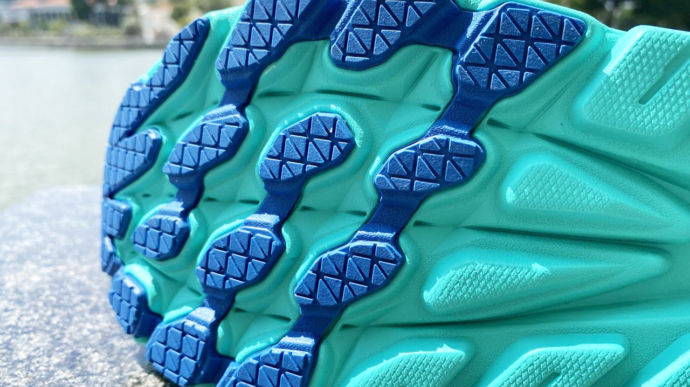 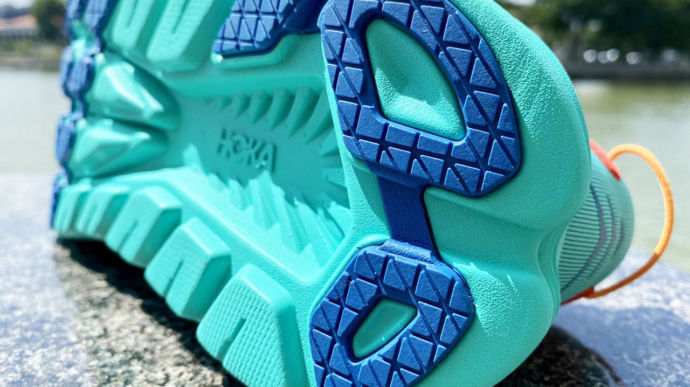 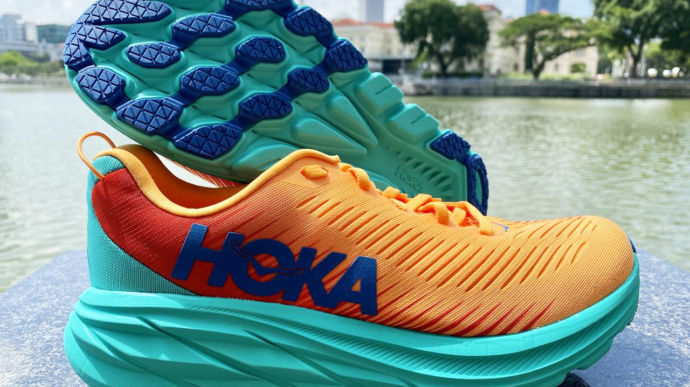 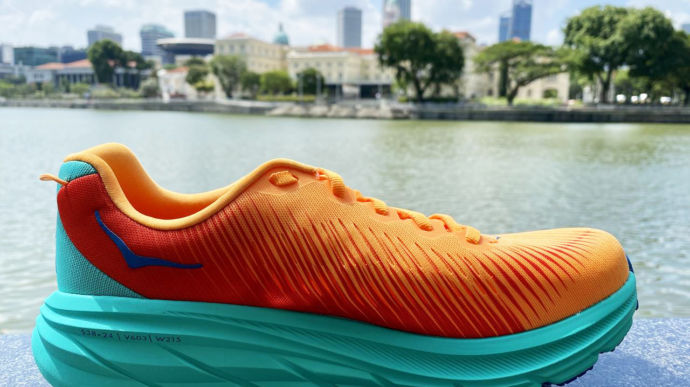 The Hoka One One Rincon 3 is a multipurpose trainer that can handle almost any pace and any distance. Its strength is its lightweight build but its weakness is its lower than average durability.

Version 3 is a big improvement over previous versions. It has a smoother ride, a more resilient midsole and a more durable outsole.
WHERE TO BUY
LOWEST PRICE
$0
SHOE INFO
Hoka One One
Brand
Rincon 3
Model
Lightweight
Type
7.4 oz. (210 gr.)
Weight
115 US$
MSRP
5 mm
Heel Drop
Rincon 2
Previous model
WHO IS IT FOR
If versatility and lightweight are high up on your priorities list when it comes to trainers, the Rincon 3 is a great choice for you.

The Rincon 3 also has plenty of cushioning and has a snappy forefoot that makes it easy to pick up the pace.
Help me choose

Hoka One One Rincon 3 Intro

“Soft & light meets fast.” That’s the tagline printed on the insole of the Rincon 3 and it informs us where Hoka places the Rincon in its road running lineup: it’s a lightweight, cushioned, tempo trainer.

The Rincon is named after the famous surf spot in Southern California, a place known for its well-formed waves and the Rincon is a relatively new shoe.

Having only launched in 2019 but it’s already proven to be extremely popular with the masses. Along with the Clifton, these two cushioned trainers have been huge success stories for Hoka One One.

When the first Rincon came out, it was my favourite tempo trainer at the time.

The unusual combination of fast and cushioned made for a very unique, fun ride, however, after just a few runs, I noticed that its soft outsole had been demolished by the road.

I’ve put less than 100 kilometres on my pair and it looks as if I placed the outsole on a hot grill for a couple seconds.

The Rincon also tended to lose its cushioned, bouncy properties much faster than other cushioned trainers. Durability has been the big concern when it comes to the Rincon.

So how has Hoka addressed these major issues on the new Rincon 3? They’ve changed the upper, midsole and outsole. The midsole is made of a new, more resilient foam and there is more rubber on its outsole.

The Rincon 3 weighs 7.4 oz for a men’s standard size which is 0.1 oz lighter than the Rincon 2. This is very impressive considering there is so much more outsole rubber on the Rincon 3.

Hoka One One Rincon 3 First Impressions

Hoka One One Rincon 3 – Pair

There was a lot of excitement and hype surrounding the Rincon 3. The second version was just an upper update so we knew that the Rincon 3 would be a big update.

When I first saw the Rincon 3 in its Blazing Orange/Fiesta launch colourway, I was immediately drawn to it.

I was surprised with the vibrancy and attractiveness of the contrasting colours which is a big departure from previous Rincons.

Shoe companies usually wait to launch the best colourways further into the product life cycle, once sales have hit a slump but Hoka has decided to launch the Rincon 3 in this eye-catching, zesty colourway.

They wanted to make a splash with the Rincon 3.

My first run was a 42.3 kilometre long run and the Rincon 3 felt amazing right out of the box: smooth, stable and well cushioned. My legs felt great after the run.

The biggest surprise was how much smoother ride transitions felt than the Rincon 1 and 2. The forefoot no longer felt lumpy and it was easy to get into a rhythm.

The 5 mm drop was also noticeable and I wished it was closer to 10 mm because I felt like I wasn’t getting enough assistance through transitions but 5 mm is the signature Hoka drop.

Hoka One One Rincon 3 Sole Unit

Hoka One One Rincon 3 – Sole Heel

It’s easy to go fast in the Rincon 3 and that’s the biggest compliment you can give to a tempo trainer. I find myself wanting to run fast in it, even on my easy runs.

The midsole foam is the perfect balance between soft and firm.

During runs, I’ve never thought that the midsole was too soft or too firm and while it isn’t super soft like the Rebel v2, it also isn’t as firm as the SL20.2 or the Beacon V3.

The Rincon 3 is the running shoe version of a multipurpose Swiss army knife. A do-it-all trainer which feels as good at recovery/easy pace as at tempo or threshold pace.

Hoka One One Rincon 3 – Heel Closeup

The Rincon 3’s midsole is made of a new compression molded EVA foam which is similar to that of the Clifton 8 but much lighter and not as spongy.

The airy nature of the Rincon 3’s new midsole suggests that it won’t retain its cushioning as well as the Clifton or other daily trainers but after 80 kilometres, the Rincon 3 still feels as good as new.

There are very important updates to the outsole of the Rincon 3. There is more rubber, covering the high wear areas, and the forefoot lug configuration has also changed.

The outer lateral heel area, which is typically the highest wear area of an outsole, now has rubber coverage. This is where I saw the most damage on my last pair of Rincons but durability is much better on the Rincon 3.

Outsole durability is still below average due to the high amount of exposed midsole foam so if you’re looking for a durable workhorse that can handle over 800 kilometres, the Rincon 3 isn’t the shoe for you.

Traction is excellent because the soft, exposed midsole foam grips onto surfaces well.

Just like the Clifton 8, the forefoot rubber lugs are now arranged in a diagonal pattern.

My favourite update is that ride transitions feel much smoother.

In previous versions, you could feel the lumpy lugs through the forefoot, but the Rincon 3 feels more balanced with its rubber lugs and its midsole being similar in density so the ride is much smoother.

Hoka One One Rincon 3 Upper Unit

Hoka One One Rincon 3 – Top

Hoka advertises that the new engineered sandwich mesh upper of the Rincon 3 is 100% vegan which is great to see.

On previous versions of the Rincon, the upper felt scratchy and cheap. The new lightweight mesh upper on the Rincon 3 feels more premium but it’s still not on the same level as the Clifton 8 or the Mach 4.

It’s breathable but it doesn’t feel as soft to the touch.

I like the new tongue which is flat and racing-inspired. It suits the Rincon much better than the padded tongue of the last 2 versions. It has wide wings to prevent tongue slide and it’s not gusseted.

An internal heel counter provides heel support while the collar and heel tab are lightly padded. Overall, foot lockdown is excellent but I did have to use a runner’s knot to find the perfect fit.

The fit of the Rincon 3 is true to size and I find it to be a wider, more comfortable fit than the Clifton 8. The Rincon 3 is also available in a wide version for the first time.

Hoka One One Rincon 3 Conclusion

Hoka One One Rincon 3 – Heel

The Rincon 3 is the best Rincon to date. It rides much smoother and it feels faster because its forefoot is more snappy. It also has more outsole rubber coverage and its midsole foam is more resilient so it’s much more durable.

The Rincon 3 is similar to the Rebel v2 in that they are both super light and extremely versatile in nature. You can use them for easy, steady, tempo or threshold runs and for any distance.

The Rebel v2 has a much plusher ride but the Rincon 3 has a more snappy ride which feels faster.

The Rincon 3 pairs perfectly with the Clifton 8 in a rotation.

The Clifton 8 as a daily trainer is tougher and can handle wear and tear much better whereas the lighter Rincon 3 can pick up the pace on tempo or threshold days.

However, if I could only have one, I’d pick the Rincon because of its greater versatility.

The closest shoe to the Rincon 3 in feel is the Hoka Mach 4. The Mach 4 is slightly heavier but it has a more comfortable, more premium upper.

The Mach 4 also has more ground feel because of the absence of outsole rubber but it costs $15 more.

We purchased a pair of Hoka One One Rincon 3 from runningwarehouse using our own money. This did not influence the outcome of this review, written after running more than 50 miles in them.

Hoka One One Rincon 3 Price Comparison

Visit ShopRunningWarehouse.Com
This page contains affiliate links. As an Amazon Associate I earn from qualifying purchases.
WHERE TO BUY
LOWEST PRICE
$0
AVAILABLE ON SALE:Previous model $179

Similar shoes to Hoka One One Rincon 3