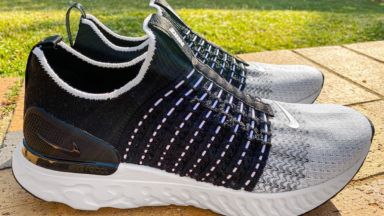 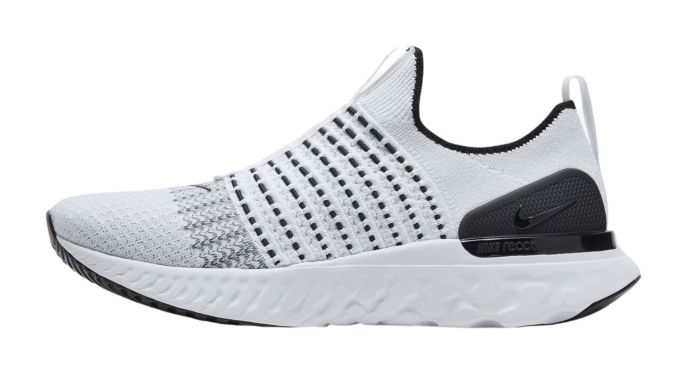 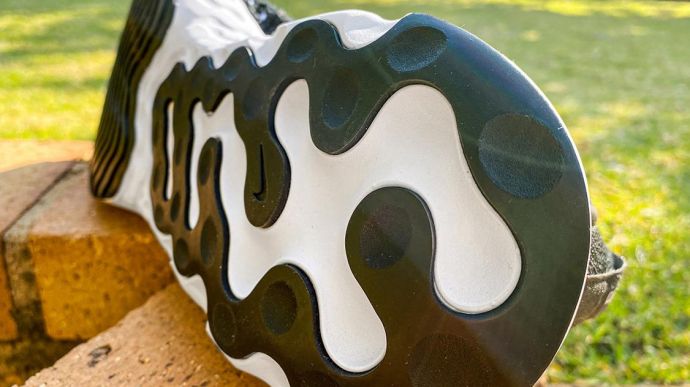 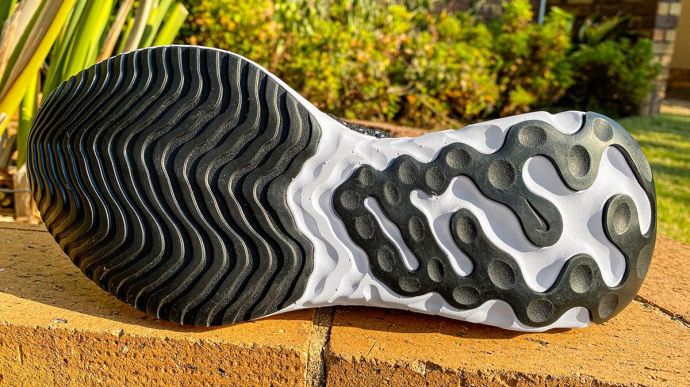 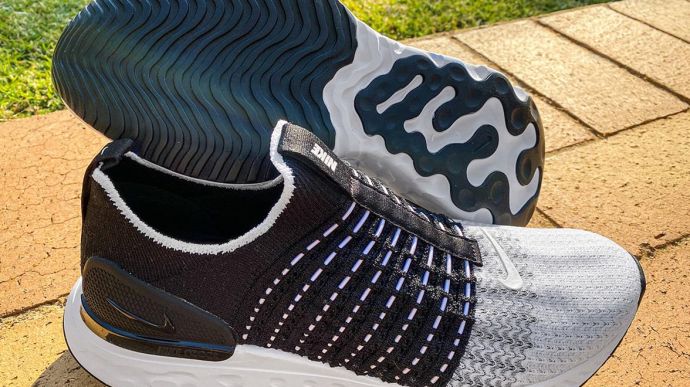 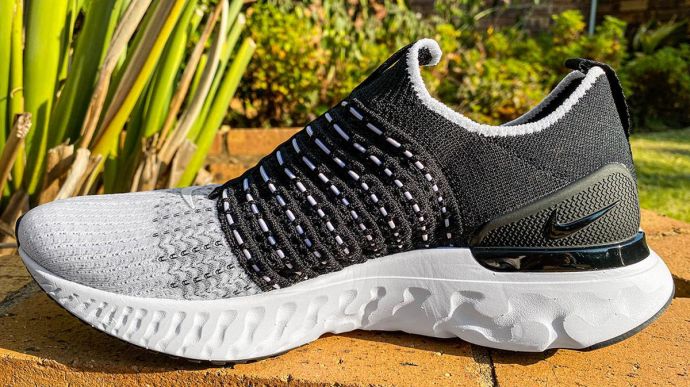 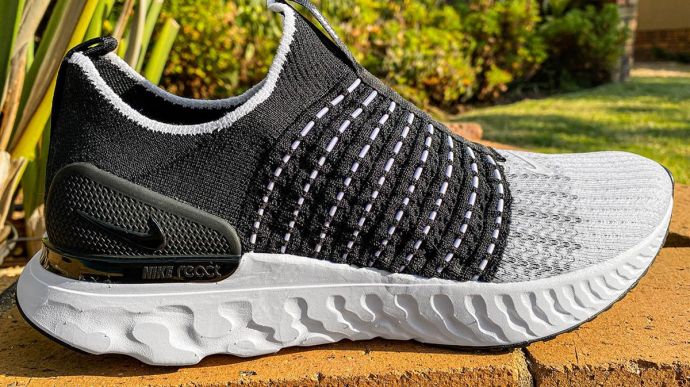 There has always been a connotation that laceless running shoes are for casual wear and not for performance running.

You rarely see runners on the road wearing laceless running shoes and when you do see them, they look like casual runners and not marathoners.

The React Phantom Run 2 has a similar midsole and outsole to the massively popular React Infinity Run but the upper is completely different.

I liked the midsole of the Infinity Run. It was soft, responsive and didn’t bottom out even on super long runs.

It was the softest variant of React foam that Nike had ever put in a running shoe and filled the empty void that the Vomero left.

The upper of the Infinity Run didn’t work for me. I experienced heel slippage and the wide forefoot and midfoot felt sloppy: it felt like my foot was swimming inside the shoe.

It could have been due to my narrow feet but if you read reviews on the Infinity Run, all of them complain of the heel slippage.

This proves that either Nike doesn’t test their shoes properly or that they don’t listen to the feedback that their wear testers give them.

The Phantom Run 2 was released a good four months after the Infinity Run, so was that enough time for Nike to make changes to improve the upper to prevent the heel slippage?

The first thing I noticed when holding the shoe in my hand for the first time was how stiff the midsole felt.

I was expecting the forefoot to be quite flexible like the forefoot of the Infinity Run but it takes a lot of force to bend the midsole of the Phantom Run 2.

When you force the shoe to flex, it also flexes further back, in the middle of the shoe whereas the Infinity Run flexes in the forefoot.

When putting on the shoe, the insides felt seamless and slipper-like. The fit was just right with enough room in the forefoot to splay.

I went down a half size which is the right size for me because the inside of the Phantom Run 2 is roomy and there are no laces to adjust to dial in the fit.

If I had gone true to size, it would have been a disaster. I highly suggest you go down a half size or try the shoe on before buying it.

When compressing the midsole with my fingers it felt like a denser version of React compared to the React of the Infinity Run.

When walking around in the Phantom Run 2, I could feel the prominent arch of the shoe against my midfoot which was also a characteristic of the Infinity Run. This sensation disappeared when I started running.

It’s React foam density sits between the Infinity Run and the Zoom Fly 3 and it feels like the perfect amount of cushioning.

Its stiff forefoot allows the rocker to work and transitions in the Phantom Run 2 feel effortless. It reminds me of the Asics GlideRide but not as aggressive.

While the Infinity Run’s super soft, squishy midsole made it only suitable for long runs at relaxed paces.

The Phantom Run 2 is a multi purpose trainer which can be used as an everyday trainer, has enough cushioning for long runs and is also responsive enough for tempo runs.

I tried using the Phantom Run 2 as a recovery shoe but it was just a tad too firm; it’s also a bit too heavy to be a short-distance racing shoe, so it works perfectly as a mid-distance shoe.

The midsole has a broad forefoot and rearfoot so the Phantom Run 2 feels very planted and stable. It’s also not overly soft so there isn’t much lean bias.

The outsole of the Phantom Run 2 is split into two separate parts. The forefoot is completely covered in a solid piece of rubber with no flex grooves.

The midfoot and rearfoot have articulated pieces of rubber with large, deep grooves in between them. Traction has been great on a variety of surfaces, wet and dry.

The area between the forefoot and midfoot rubber area as well as the sides which are not covered in rubber scuff the ground and show wear first.

The rubber used is a soft blown kind, not nearly as durable as the BRS1000 rubber found on the Pegasus 37 but much more flexible.

The insole of the Phantom Run 2 is medium-thick and adds an extra layer of cushioning.

The Phantom Run 2 feels like a well-built trainer. Its React midsole won’t lose much cushioning over the life of the shoe, and there are no signs of degradation on the upper.

I expect the soft rubber on the outsole to wear down and be the part of the shoe that breaks down first.

The toe box of the Phantom Run 2 is made of triple-layer Flyknit Loft which is rough to the touch and doesn’t stretch at all.

Flyknit Loft is light and breathable but the problem I have with it is that dirt gets trapped in between the layers and is hard to get out.

The midfoot is made of elastic Flywire cables. These cables have just the right amount of stretch to provide a secure midfoot lockdown without being obtrusive.

The tongue, collar and heel are all made of more traditional, stretchy Flyknit.

The collar of the Phantom Run 2 comes up high and rubs the base of the ankle so going sockless is out of the question. I make sure that I wear socks which are longer to protect my feet from chaffing from the collar.

There are external rubber panels on the sides of the heel to provide some heel structure and support, similar to the setup of the Ultraboost.

The heel clips on the back of the shoe are split into two and don’t wrap around the entire heel like on the Infinity Run but it makes no difference to the ride of the shoe.

There is no bunching of the lace area from tying the laces tight and trying to get a good foot lockdown.

There is also no heel slippage in the Phantom Run 2 due to two main reasons: the midsole is firmer and stiffer.

The second reason is that the midsole doesn’t flex so there is less vertical movement when transitioning through the gait cycle.

My favourite thing about the Phantom Run 2’s upper is that I don’t have to spend time before my run trying to adjust the laces to get the right balance between tight and not uncomfortable. I just slip them on and go.

The upper of the Phantom Run 2 is an improvement over the Infinity Run but you still won’t get the same level of foot lockdown as a shoe with laces and double last row eyelets for heel lock lacing.

It has just the right amount of cushioning and can be used for daily training, long runs and even tempo runs.

It has an upper which is seamless and comfortable but it does run a half size large. Its toe box is made of Lofted Flyknit which is breathable and doesn’t absorb much liquid.

The Phantom Run 2 improves on the shortfalls of the Infinity Run: it’s more stable, more versatile and there is no heel slippage.

The stiffer, rocker-shaped midsole rolls you through your stride and makes transitions feel smooth and effortless.

For the next version, I would like Nike to improve the sizing so that it fits true to size and to lower the collar so that chafing doesn’t occur when you go sockless.

I feel that the Phantom Run 2 can be a replacement for the discontinued Structure. Its wide base is supportive and its upper secure enough to prevent your ankles from rolling sideways.

The Phantom Run 2 surprised me a lot. Not only is it a serious running shoe, but so far it’s the best Nike running shoe release this year.

We purchased a pair of Nike React Phantom Run Flyknit 2 from Nike.com using our own money. This did not influence the outcome of this review, written after running more than 50 miles in them.

Visit ShopNike
This page contains affiliate links. As an Amazon Associate I earn from qualifying purchases.
WHERE TO BUY
LOWEST PRICE
$140