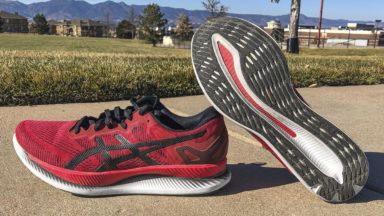 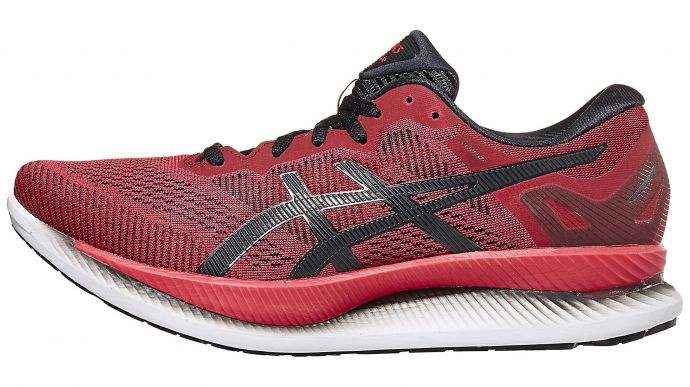 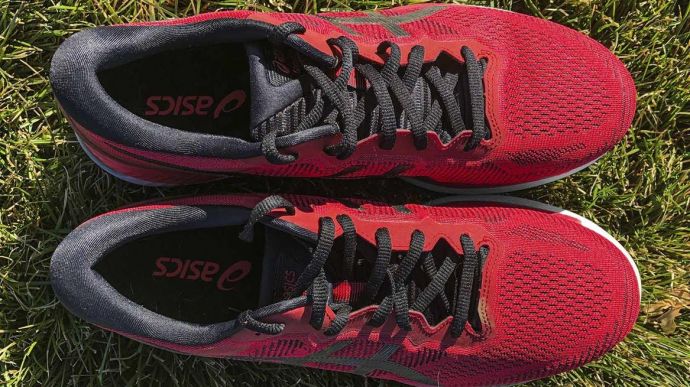 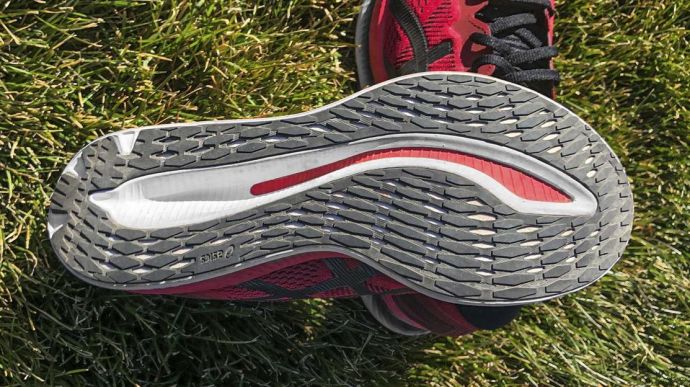 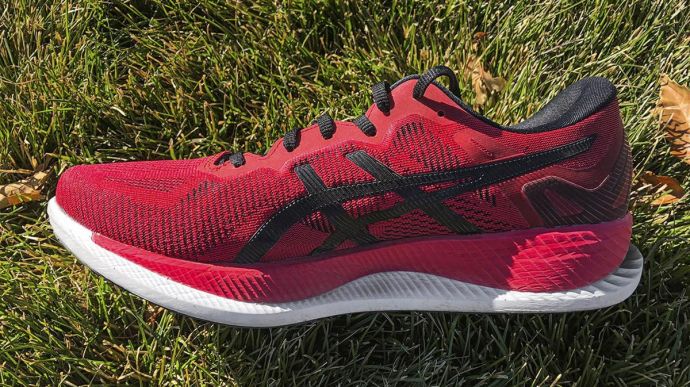 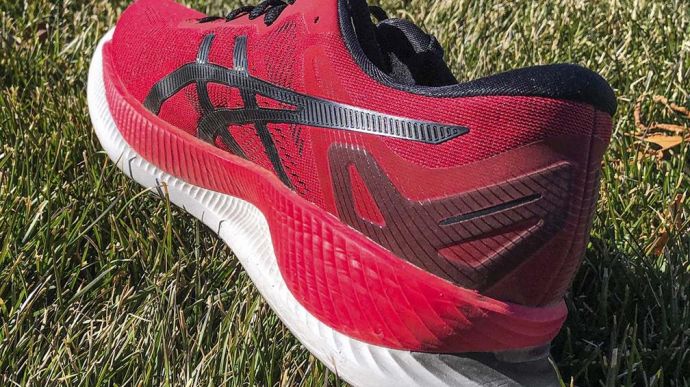 The ASICS GlideRide is a welcome departure from their established, but stale, running shoe line. This new technology uses different layers of foam and a rocker shape to create a bouncy and efficient ride.
WHERE TO BUY
LOWEST PRICE
$99
SHOE INFO
Asics
Brand
GlideRide
Model
Cushioning
Type
10.3 oz. (292 gr.)
Weight
149 US$
MSRP
6 mm
Heel
WHO IS IT FOR
The GlideRide is a shoe that could be enjoyed and utilized by all types of runners, from beginners to high mileage hogs.

Its an optimal shoe for long runs and easy days, but it can also pick up the pace for a steady state workout.
Help me choose

ASICS is a company that has seemed to be stuck in a rut for past few years.

Following a $182 million dollar net loss in fiscal year 2018, ASICS has revamped with a new CEO as well as new shoe technologies to breathe some life into their performance running line.

Mainstays, like the Kayano, Nimbus, and Cumulus look and ride like they’re stuck in a late 1990s timewarp, and while there certainly is a market that continues to buy those models.

You just don’t see them on the feet of runners looking for performance improvements by logging decent mileage.

After two years of research ASICS introduced the MetaRide in early 2019, and the company highlighted the shoe’s technology specifically to help ASICS regain market share.

Well, the MetaRide was a valiant first effort, but while the technology was there, many runners felt it lacked the full package.

The GlideRide aims to take the innovative midsole features of the MetaRide, add an improved upper, and pair down the upper, and take one hundred dollars off the price tag.

The GlideRide aims at taking on other maximal trainers that use new foam technology and even carbon plates. Think Nike Zoom Flys, Adidas Ultraboost, or a Hoka Clifton.

My first impressions of the GlideRide were pleasant. The aesthetics reminded me of the monochromatic ASICs of the 1980s with simple, but bright colorways, that made the logo stand out.

Noticeably absent were thermoplastic overlays and other unnecessary accouterment that seem to litter so many ASICS models.

Trying on the shoes revealed a fantastic upper fit with a wide toebox which was a very pleasant surprise. For lack of a better term, the cushioning felt bouncy, and the rocker shape was very noticeable when walking around.

My first run in the shoes was three days after a recent marathon, and I was thankful for the high level of cushioning.

What really sets the GlideRide apart from other running shoes is that it obtains the feel of faster turnover and forward propulsion through the use of various types and placements of EVA and TPU foam in addition to a very rockered shape.

Flytefoam is a very responsive and bouncy foam that sits on top of ASICs other new foam, Flytefoam Propel.

All of this 35mm of foam is formed into a rockered GuideSole shape which aims at reducing the amount of ankle movement during the running gait to reduce energy.

It also places a hard EVA plate in the forefoot of the shoe which helps with forward propulsion, as well as some gel pods in the heel.

Given the low 6mm drop of the shoe and the already high level of cushioning and stack height of the GlideRide, the gel pods do seem unnecessary, especially since they add weight to an already heavier shoe (11.3 ounces for my men’s 10.5).

The feel of the GlideRide is protective, stable, and bouncy. ASICs placed the center of gravity of the shoe towards the heel which was aimed at reducing fatigue while your foot swings through the gait cycle.

I definitely noticed this on subsequent runs where the paces got faster, and it felt like my turnover was subtly increasing.

Overall, I would place the cushioning feel between a more squishy shoe, like the Hoka Clifton 6, that feels like you sink into, and the Nike Zoom Fly which feels more firm and responsive.

The ride is forgiving, but efficient, and I found that my easy days were at slightly faster paces in this shoe.

With all of the technological advancements in the midsole foam and last shape, it is easy to overlook the upper on this shoe.

ASICS has struggled in this area, in my opinion, over the last seven years and they seemed to lag behind other companies who had transitioned to comfortable knit uppers.

The GlideRide offers a near perfect upper with a sleek design that is comfortable and secure in the heel and forefoot, but then more expansive in the toebox.

The GlideRide fits true to size, and despite the shoe being very stiff due to the EVA plate and rocker shape, I didn’t experience any heel slippage and my foot doesn’t move around much while turning or taking steep downhills.

The heel collar of the GlideRide is unnecessarily plush and it reminds me of recent Saucony shoes, like the Triumph, where this pillowy heel collar just seems to add weight.

The rest of the upper is an Engineered Mesh, but it has the feel and appearance of being knit, while also being very lightweight.

All other overlays are welded on and the upper is almost seamless which really highlights the classic ASICS logo and tones down the look of the avante garde midsole.

I found the GlideRide to be breathable and it performed well in a variety of conditions. Due to living in the high desert, I was unable to test the shoe in very humid or wet conditions to see how they drain.

The ASICS GlideRide seems to be the fully idealized version of the MetaRide which was released in early 2019.

This stripped down and lighter version features a 5mm heel drop, a slightly lighter weight, and a much more digestible price tag of $150.

ASICS has developed some foam combinations that rise far above the capabilities of their GEL technology or other foams they’ve designed, and its really the combination of how these foams are put together that brings out the performance.

While the GlideRide doesn’t use a carbon plate, like the Hoka Carbon X or Nike Vaporfly Next%, the idea is somewhat similar.

I would place it more in line with the Carbon X in terms of its rocker shape and how it feels to run in the shoe.

However, the GlideRide is not meant for racing and it isn’t a shoe that I would put on for a tempo run or fast workout. This shoe is made for the long run.

My personal experience with the shoe has been mixed. While I generally enjoy the sensation of running in the GlideRide I find that over time little niggles and pains tend to come out over time.

I am no biomechanist, but recent research out of the University of Colorado, Boulder showed this data on how the foam of the Vaporflys truly works.

These researchers did find that those wearing the 4% shoes didn’t have to exert as much muscular torque at their ankles, and thus the calf muscles did not have to do as much work.

Further, the plate made the shoe less flexible and thus the foot muscles that stabilize the toe joints didn’t have to work so hard.

ASICS claims that the GlideRide decreases ankle mobility by 19% which reduces the amount of work that my calves were doing.

You can feel this while running, and in general, my lower legs and feet were less fatigued at the end of runs. However, the GlideRide (and Vaporfly 4% and Next%) also decreased flexion in my forefoot and big toe.

Over time, in all of these models, I found myself reaching more with a longer stride to land on my heel and take advantage of the shoes capabilities.

This overstriding left me with posterior chain issues in my hamstring, glute, and IT band that would often take several days to alleviate itself and during that time I would return to a much more minimal, low drop, neutral shoe.

So what does this mean for the running shoe arms war? Frankly, we need more data. Having now run two marathons in these new types of shoes I am underwhelmed.

Having not trained in these types of shoes extensively (who can afford to use them as a daily trainer), I saved them for marathon pace runs and race day.

In both marathons I experienced debilitating muscle fatigue and tightness in my posterior chain which I haven’t experienced in the past.

While limiting the natural movement of the ankle, arch, and big toe joint may be more efficient, I wonder what the long term effects of runners using them as daily trainers.

One thing is for certain, it seems that ASICS will be a strong contender in the shoe war, and I would expect a racing version of the GlideRide to come out around the US Olympic trials.

We purchased a pair of Asics GlideRide from runningwarehouse using our own money. This did not influence the outcome of this review, written after running more than 50 miles in them.

Visit ShopRunningWarehouse.Com
This page contains affiliate links. As an Amazon Associate I earn from qualifying purchases.
WHERE TO BUY
LOWEST PRICE
$99