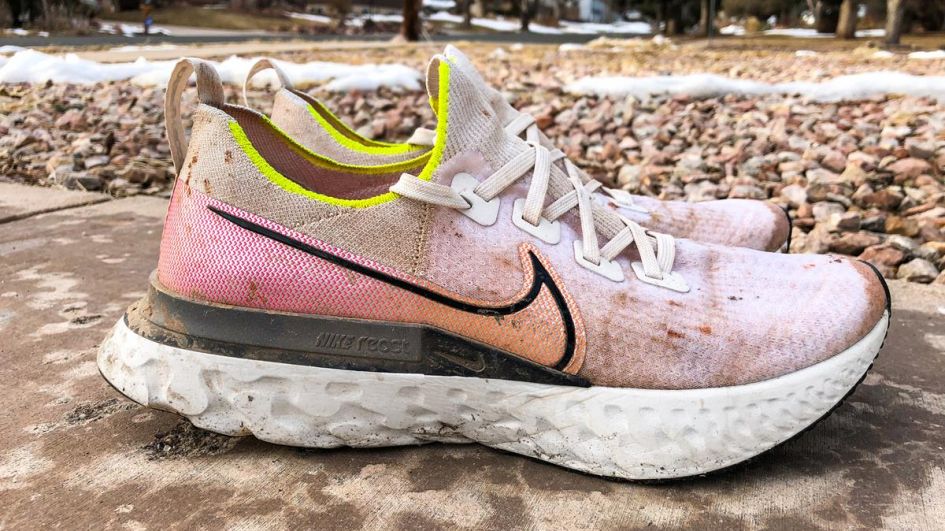 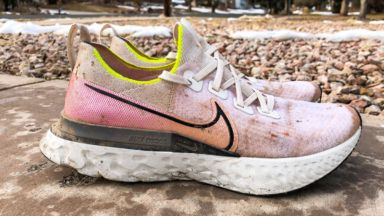 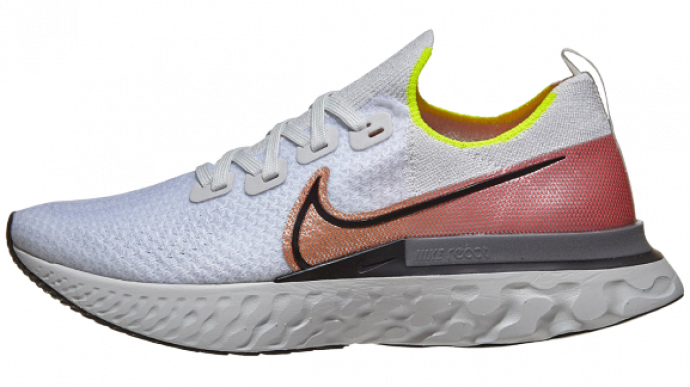 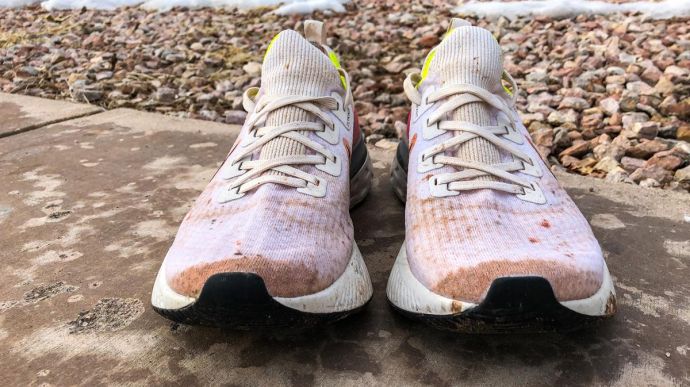 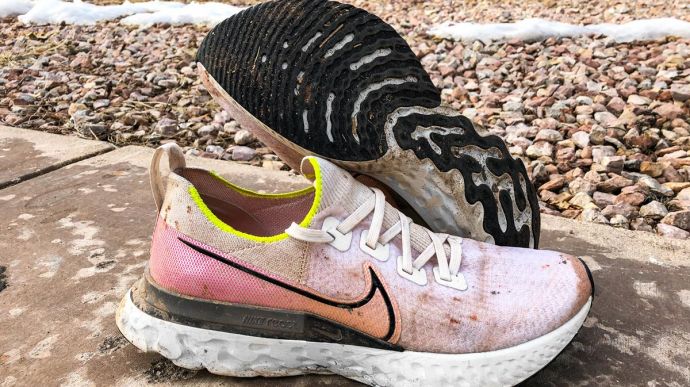 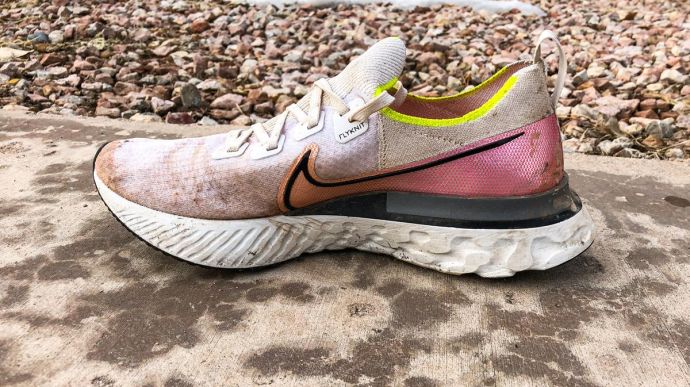 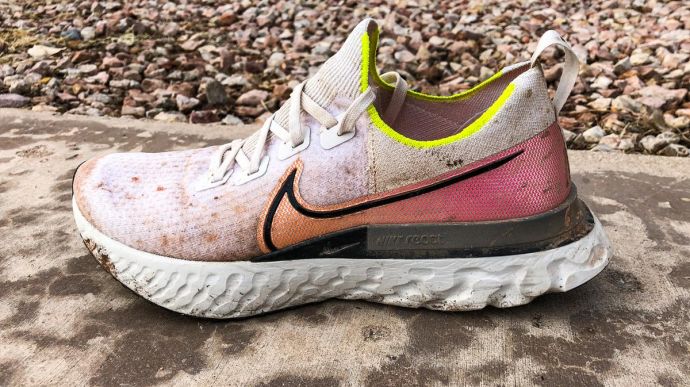 The Nike React Infinity Run provides the best cushioning platform on the market with a natural feeling stability due its wider shape.

Nike uses more React foam than ever to create a soft and springy ride that seems to rejuvenate the feet and legs on easy days and long runs. This is a great high mileage shoe to wear in between faster paced workouts.
WHERE TO BUY
LOWEST PRICE
$160
SHOE INFO
Nike
Brand
React Infinity Run Flyknit
Model
Stability
Type
10 oz. (283 gr.)
Weight
160 US$
MSRP
8 mm
Heel Drop
WHO IS IT FOR
The Nike React Infinity Run is a shoe that will have very broad appeal. It has enough protection and stability to work as a great shoe for beginning runners who are just getting into the sport.

Additionally, the protection of this shoe will appeal to advanced and elite runners looking for a well cushioned shoe for their easy days.

The React Infinity Run may just be the most versatile running shoe on the market for all different kinds of runners.
Help me choose

It is one thing for a running shoe company to try to build the lightest racing flat or best carbon plated marathon racing shoe.

Its quite something different for a company to take on the inevitable and worst part of our sport; injury.

As one of Nike’s Moonshot projects the idea of creating a shoe that reduces injury and the amount of time that athletes have to avoid running due to various niggles.

Seems like a very moral pursuit for Nike, a company whose moral compass has been called into question quite a bit in the past year.

The general thinking behind injury prevention in the past with running shoes has been to reduce the amount of pronation (think inward roll) that the foot goes through during the gait cycle.

Reducing pronation was thought to reduce stress through the rest of the kinesthetic chain including the knees and hips.

However, there has never been any evidence to support this and the use of medial posting and dual density midsoles has fallen out of fashion in the last several years as more runners have migrated back to neutral shoes.

The React Infinity Run doesn’t aim to correct pronation, rather it creates stability due to having a wider platform for the shoe.

If you’ve run in past versions of the Nike Epic React be ready for a completely different experience.

This is a shoe that most closely resembles the most well cushioned and protective shoes on the market including the New Balance 1080v10, Hoka’s Bondi or Clifton 6, Brooks Glycerin 17, ASICS GlideRide, the Adidas Ultraboost, and Nike’s own React and Structure series of shoes.

The experience of running in the React Infinity Run is very unique in both its cushioning and ride.

I was intrigued by the React Infinity Run since Nike announced it would be creating a shoe to reduce injury.

It is clear that as a company they are willing to do their research and development, and the midsole foams they’ve created in the past two years have left would be competitors in the dust.

I’d enjoyed running in the original Nike React Flyknit shoes and I was looking forward to trying a new iteration.

Additionally, I felt like Nike’s contracted study to measure the efficacy of the shoe’s claim to reduce injury was inherently flawed and unreliable as there was little control in the design which consisted of 226 runner being divided into two groups to train for a half marathon.

Nike claimed that those runners wearing the React Infinity Run had a 52% lower injury rate than those wearing Nike’s more traditional stability shoe, the Structure 22.

I was expecting to unbox a stability version of the Nike React shoe and be disappointed.

The design of the React Infinity Run is very unique with its elegant and simple knit upper on top of a very wide and flared midsole.

The rockered sole design is obvious when trying on the shoe as is the incredible amount of soft cushioning.

The other very noticeable feature of the shoe was a very loose and unstructured heel collar that I’d heard was a deal breaker for some runners.

Nike’s React foam has been on the market now for about two years, and this foam’s resiliency is highly lauded.

With the React Infinity Run Nike uses more React Foam than ever and the shoe features an 8mm drop (30mm heel, 22mm forefoot). The rockered shape of the midsole/ outsole makes the transition from heel to toe very smooth.

Among current running shoes on the market I cannot think of a shoe with a similar amount of cushioning and with an equally pleasant ride at slow to moderate paces.

The React foam isn’t as marshmallow soft as a Hoka Clifton, springier than Saucony’s PWRRUN, and it feels much lighter than Adidas’ Boost foam.

The outsole is fairly thin, but isn’t showing any signs of wear after over 100 miles. The outsole has been grippy on wet pavement, crushed gravel, and on snow, and I appreciate that Nike didn’t skimp on the outsole to save weight.

This upper is really the only area of the shoe that I can see receiving criticism. Nike uses their Flyknit Loft which actually features three layers of knit material and feels very durable.

I haven’t run in hot or muggy weather in the shoe so I can’t really attest to whether or not this upper breathes poorly or is hot.

I’ve done a few 10 milers on the treadmill and several 18 mile long runs in around sixty degree weather and I didn’t notice my feet sweating excessively.

This material does stretch adequately for toe splay which was a nice addition to go along with the wider toe box.

This Flyknit upper is one piece and does get a little thicker at the tongue. The pressure from the lacing can become an issue because you have to lace these babies tight.

The reason for this is that the heel collar is quite loose and unstructured, and I’ve runners complain of heel slippage.

I didn’t personally experience this, but I had these same concerns about the Nike Pegasus 36 when I initially tried them on, and these fears were unfounded.

I do notice that React Infinity Run slips a bit on steep uphills and my foot also slides forward a bit on steep downhills, but for the most part I don’t notice any issues with the upper.

Again, I may just be used to running shoes where the heel flares away from the achilles like the Pegasus 36, and I’ve never been a runner who likes super locked down and tight fitting running shoes.

The other noteworthy feature of the upper is the TPU Heel Clip which is a plastic feature around the base of the heel cup. I never noticed that this clip was providing any additional stability and its pretty much a non-issue.

I wanted to dislike this shoe after Nike made claims that it reduced injury in a flawed study without much control and with a small sample size.

But, I found myself reaching for the React Infinity Run most days when I had easy mileage or a long run scheduled. The reason is the cushioning, transition, and the wide and stable platform.

The React foam is wonderfully soft, springy, and resilient, but it may be a deal breaker for runners preferring a firm ride. Also, this isn’t a shoe for speedwork or racing, and its not intended to be a “do everything” shoe.

Sure, runners over 3:30 in the marathon could wear this as a racing shoe, but more experienced runners will love the React Infinity Run as a recovery shoe.

Overall, I’m excited about the prospects of the Infinity Run and React foam. I have no doubt that I can get 500 miles out of this shoe and I fully intend to.

The only update I could see for version two would be tweaking the heel collar to provide a bit more support.

Otherwise, this is a great daily trainer for any runner, whether you’re neutral or needing stability, regardless of your experience or mileage.

We purchased a pair of Nike React Infinity Run Flyknit from runningwarehouse using our own money. This did not influence the outcome of this review, written after running more than 50 miles in them.