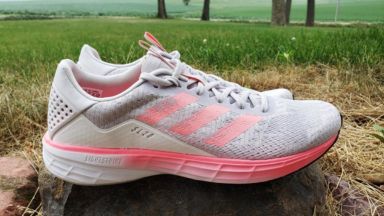 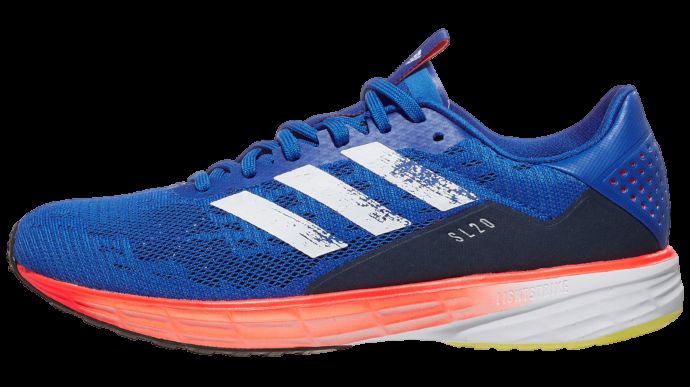 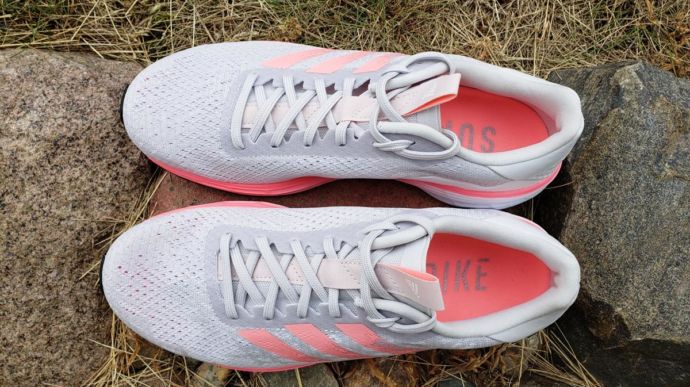 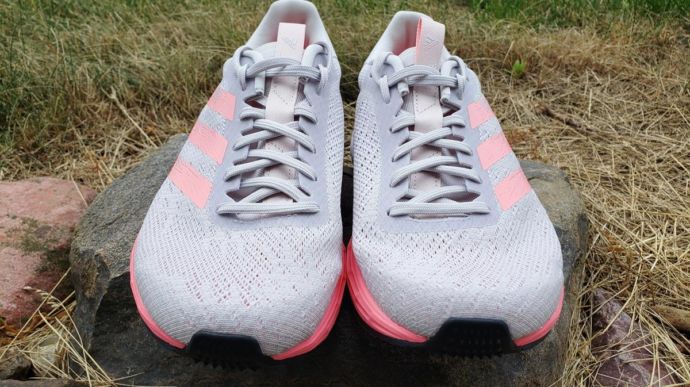 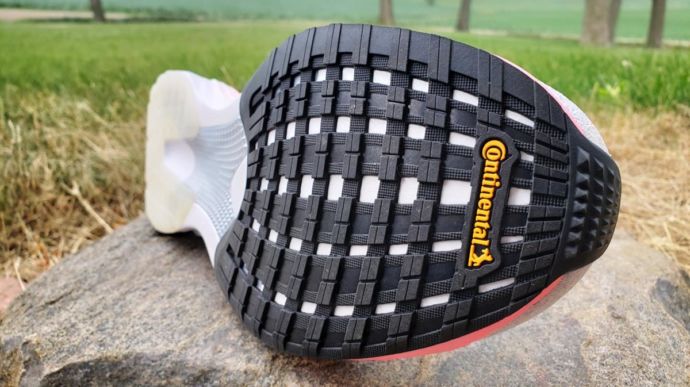 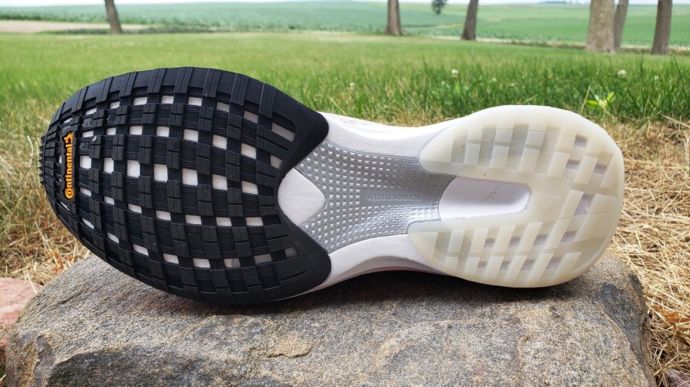 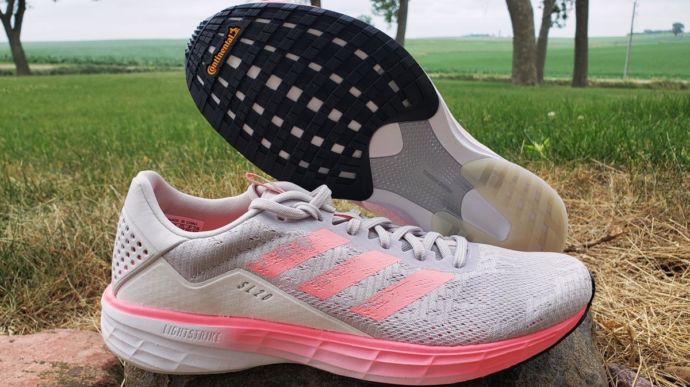 The adidas SL20 delivers on its promise of a lightweight, breathable ride for hot summer days.

The thin mesh upper offers a generally supportive fit, and the midfoot torsion plate grants a touch of stability to the shoe without making it feel stiff.
WHERE TO BUY
LOWEST PRICE
$41
SHOE INFO
Adidas
Brand
SL20
Model
Lightweight
Type
8 oz. (227 gr.)
Weight
120 US$
MSRP
6 mm
Heel Drop
WHO IS IT FOR
The SL20 comes to its own when picking up the pace for speedwork or tempo runs and feels a bit flat when slowing down.

Those without high support needs will find this to be a fun, light shoe for hot summer runs, best for 10K and shorter, though some find it to work for longer distances as well.
Help me choose

Adidas features its Lightstrike foam as the sole material in a running shoe midsole, with full-length Lightstrike in SL20. True to its name, the SL is indeed Super Light.

(For adidas’ latest version of Lightstrike, see this link on LightstrikePRO debuting in the Adios Pro: https://www.runningshoesguru.com/2020/06/a-first-look-at-the-new-super-shoe-from-adidas-the-adizero-adios-pro/).

Lightstrike foam first appeared in basketball shoes in 2018 and this season comprises the full midsole in the running shoes SL20 and Adizero RC 2.0.

Lightstrike is part of the midsole in combination with Boost and a carbon plate in Adizero Pro, and is found along with Boost in Adizero Boston 8 and 9 and Adizero Adios 5.

Many of my runs in this shoe were in 100-degree heat index temps (about 38 C). I found it to be very breathable but NOT a good shoe to try sockless: too scratchy!

Thin, low-cut socks worked for me, but some find a higher cut and/or thicker socks to be necessary given the rough feel of the upper and high heel counter.

I ran in the SL20 SUMMER.RDY shoe, a medium-priced running shoe at $120. Since we’re midseason, this shoe—as well as some other versions of SL20—are discounted quite a bit.

Now is a great time to snag them up if you want to end the summer on a lighter note.

Lightstrike is light like Nike React foam but not as squishy. SL20 itself is not as light as HOKA Rincon but is one of the lowest weight shoes from adidas.

SL20 looks to be almost the same shoe as Adizero RC 2.0 but has more Continental™ rubber in the forefoot.

The Adizero shoes from adidas feature a snug, lightweight fit and performance-oriented springy ride similar to SL20’s mode of operation.

The added price comes with added benefit in this case, with Adizero Pro offering a softer upper that is great for sockless running, with the carbon plate leading to a quicker toe-off.

Nike Pegasus Turbo is a bit more cushioned but is another lightweight shoe that competes with SL20.

These were on my feet immediately after they arrived. Would they be like my beloved Adizero Tempo 9? Walking in SL20 and Tempo 9, one on each foot, they actually felt very similar.

The SL20’s streamlined fit and soft-responsive feel underfoot gave me hope. I did note that Tempo has a touch more under the arch. Tempo’s upper also has suede-like strips absent on the SL20, both bordering the toe box and on each side.

Upon running in them, my hunch was correct. I noticed the SL20’s lack of support strips most in the medial midfoot (together with the less substantial arch);

Tempo’s arch hugs in tightly while this is the slackest spot on the SL20, in an otherwise secure-feeling shoe. Tempo’s midfoot better resists pressure to bend or twist.

The heel counters are very similar; Tempo’s is more firm while SL’s is taller. SL20 is 1.3 ounces lighter in the women’s size 9.5, without the heavier Boost and the more substantial upper (but they’re both so light).

I ran in the two shoes, together, to get a feel for similarities and differences.

The Result: Switching from SL20 into Tempo, I immediately notice the higher (medium-height) arch underfoot, which gives me a lighter step to offset the added ounce. SL20’s upper is more breathable.

Tempo’s holds my foot more secure. One difference between Adizero Tempo 9 and SL20’s uppers, is that Tempo has fabric strips lining the toebox and going toward the midfoot; these strips pull the toe back for a light rocker effect.

Without this SL20 has a comparatively flat feeling ride when slowing down for recovery pace.

I love the simple, close design of these models from adidas and will stick with (my favorite, old) Tempo 9’s—or the new Adizero Pro—for long races while keeping SL20 in my lineup for short, fast-paced runs in the heat.

SL20 doesn’t replace the much-beloved Tempo, but it has other nice qualities.

Lightstrike is a TPU foam similar to the brand’s Boost, formulated to provide a light, firm cushion.

In terms of resiliency and the life of the shoe, with over 50 miles on the shoe, I do not feel an indent in the midsole at the ball of the foot when I remove the sock liner and feel inside the shoe.

An indent under the ball of the foot is the indicator that the life of the shoe is waning. It’s early to say for sure, but no indent at 50+ miles is an indicator that this shoe will last for high mileage, similar to Boost.

The Lightstrike in the medial heel of SL20 is significantly thicker than the rest of the shoe to gently guard the foot from early pronation; the rise does its job.

I don’t notice it while running but can feel its presence when walking.

This thicker inner heel is a common feature on adidas shoes, also seen in Saucony Hurricane 22, and, of course, the New Balance Fresh Foam Vongo which holds a varus wedge (higher inner edge) throughout.

A thin midfoot torsion system offers some resistance to unwanted motion, but it is not overly stiff.

The heel-toe drop of 10 mm. sits right in line with other offerings from adidas of this same performance-oriented cut in the Adizero lineup.

The Continental rubber under SL20’s forefoot offers the superb traction I’ve come to expect from adidas after experiencing it in Adizero Tempo 9 and a few Supernova models.

I had no problem making quick turns when running in some light summer rain or through the random sprinkler.

Thin and slightly pliable with more stiffness than Nike Flyknit, SL20’s engineered mesh upper offers a semi-secure hold on the foot. A little laxity just above the arch keeps me from calling it a fully secure lockdown.

The fit is narrow, but I had no problems with forefoot fit as it accommodates the wider girth at the ball of my foot. Length is true-to-size, to a touch long, but I wouldn’t call it even a half size “long.”

SL20 has the thinnest tongue I’ve ever seen in a shoe. This aids breathability but also requires me to retie a few times every run to get the right balance of security without too much tension.

Since I like it snug, the nylon tongue ends up with some ridges running parallel to the length, but once I get the tension right, they don’t bother me when running.

The tongue attaches to the upper two holes down from the ankle opening, right where the laces pass through a shallow loop on the tongue.

All together this construction keeps the laces locked into a secure fit; in effect, they do not adjust easily which can be a bit annoying when taking the shoe on and off but overall keeps it snug.

(Looking to go sockless, spend a little more money for the adizero Pro which is uber comfortable.)

A decent heel counter is sown into the posterior upper to set the foot in forward motion. The ankle opening is lined with just enough padding to keep it comfortable without weighing you down.

The white-pink, soft grey, light pink, and coral colorways in the women’s shoe along with signal pink and blazing orange (signal coral) men’s options flash “summer-ready” to me while the men’s glory blue shade has me thinking of the (too early) fading sunlight of winter afternoons.

(A few of these shades are named “SL20 SUMMER.RDY,” but when watching some videos of the blue shade, I couldn’t help but think of the disappearing light of fall/winter!)

It’s also available in black, white, and an intriguing black/white flecked pattern for men and the same bl/wh combo pattern in the women’s shoe, as well as some “Primeblue” prints.

SL20 is light and fun for hot summer days; pair it with thicker socks for a spring and fall shoe. It’s a go-to shoe for days when you’re ready to pick up the pace and don’t want your shoe weighing you down.

The semi-stiff midfoot plate and generally locked-down upper provide this neutral shoe’s nod to stability while the overall goals of low weight and breathability shine bright.

Pick this one up for short, fast-paced runs to get the best feel underfoot from this shoe and maximize its purpose.

We purchased a pair of Adidas SL20 from runningwarehouse using our own money. This did not influence the outcome of this review, written after running more than 50 miles in them.

Visit ShopAdidas
This page contains affiliate links. As an Amazon Associate I earn from qualifying purchases.
WHERE TO BUY
LOWEST PRICE
$41