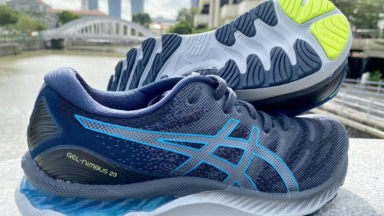 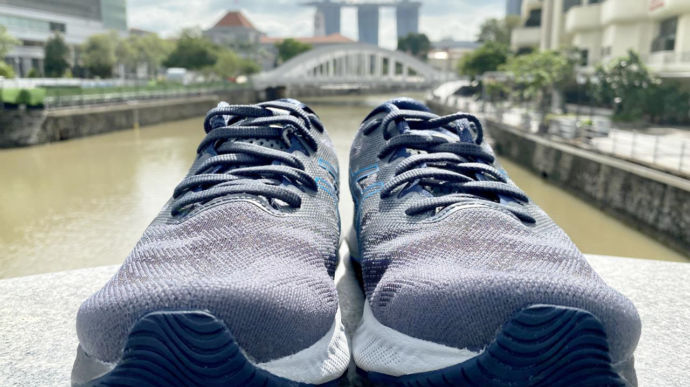 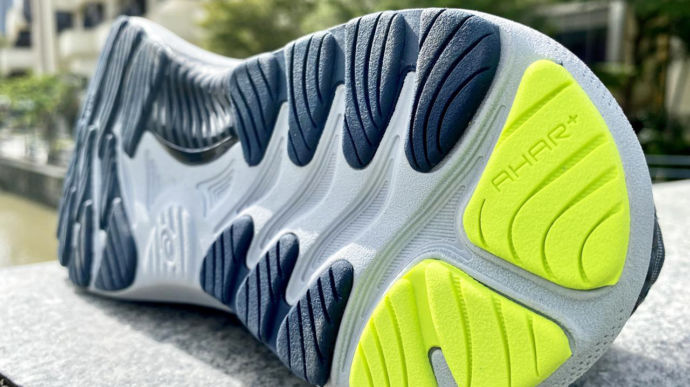 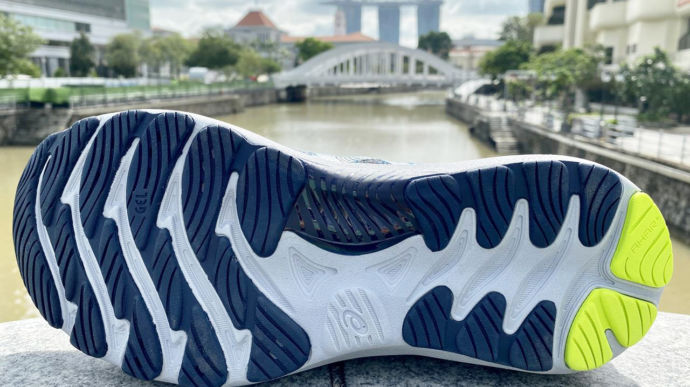 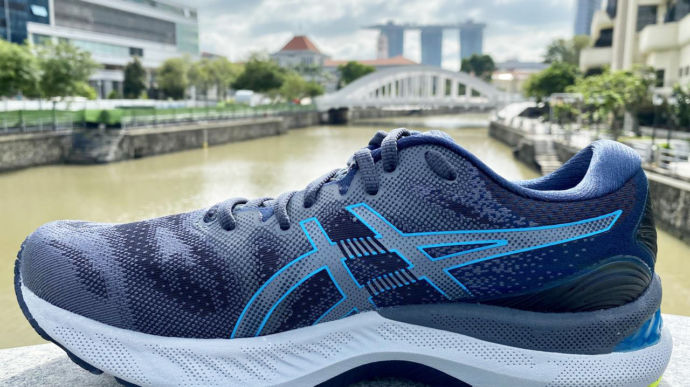 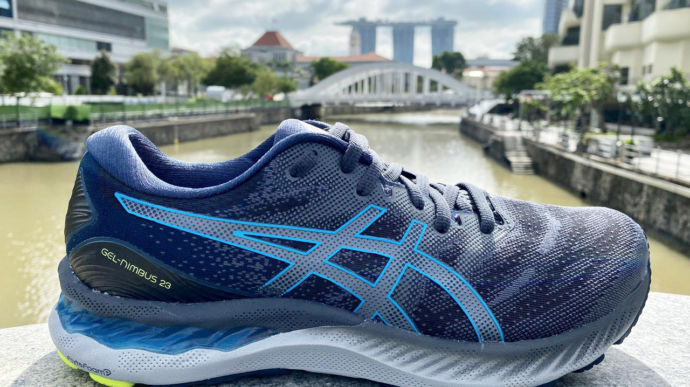 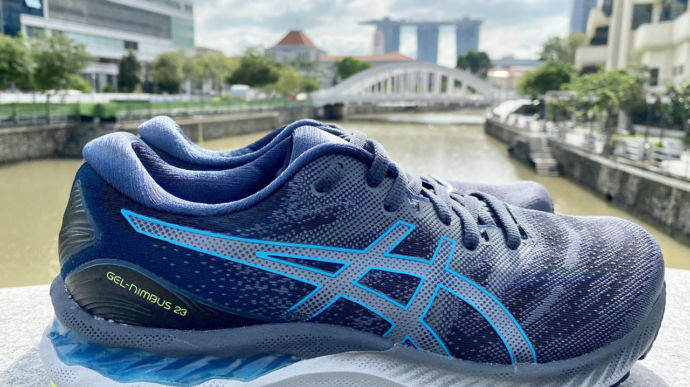 The Asics Gel Nimbus 23 is a stable, every day trainer with a squishy underfoot feel that shines during easy paces.

Version 23 has been updated with a filled-in arch area and a sleeved tongue which gives it a smoother, more comfortable ride.
WHERE TO BUY
LOWEST PRICE
$110
SHOE INFO
Asics
Brand
Gel Nimbus 23
Model
Cushioning
Type
11 oz. (312 gr.)
Weight
150 US$
MSRP
8 mm
Heel Drop
Asics Gel-Nimbus
Family
Gel Nimbus 22
Previous model
WHO IS IT FOR
If you're a runner looking for a premium-feeling, cushioned trainer with a comfortable upper and a protective ride, the Nimbus 23 is a great choice.
Help me choose

Here in sunny Singapore which is located 137 km north of the equator, there are only two types of weather conditions: hot and hotter.

A tropical climate where the average temperature is 27 degrees Celsius and average humidity is 84% is not ideal for fast-paced running.

It makes sense that one of the most popular running shoes in Singapore is one that isn’t built for speed: the Asics Nimbus 23.

From teenagers just starting running, to experienced marathon runners, the Nimbus series appeals to a wide target market and you can be guaranteed to see dozens of pairs of Nimbus’ on your run along the banks of the Singapore River or around the Marina Bay.

I never quite understood the massive popularity of the Nimbus. The last Nimbus that I used was the 19th version and I was really unimpressed with it.

Named after a rain cloud, the Nimbus is supposed to be Asics’ softest, most cushioned trainer but the Nimbus 19 was firm, the ride was boring and it was expensive.

Asics claims that the Nimbus 23 has been updated to be more stable and have smoother ride transitions than the Nimbus 22. It was also designed to have softer GEL cushioning and more heel compression.

Has Asics changed enough on the Nimbus 23 to win me over and how does it compare to the other max-cushioned trainers?

When I first saw pictures of the then-unreleased Nimbus 23 online, it looked very similar to the Nimbus 22. The only major difference I could see was on the outsole.

Asics had filled in the arch area to eliminate the wide gap that was present in the Nimbus 22.

In the looks department, the Nimbus 23 is in my opinion, hands down the best looking max-cushioned trainer.

It looks sleeker than the Triumph 18, more agile than the chunky Clifton 7 and fancier than the plain Jane Glycerin 18.

When I put the shoes on for the first time, they felt luxurious and comfortable. The fit was perfect and they fit me like a glove: definitely true to size.

My first run was 12km at an easy pace and I was really surprised with how comfortable and plush the ride of the Nimbus 23 felt. No break in period was required.

The sensation that stood out the most was the squishy layer of foam directly underneath the insole which surrounded my feet and toes with every footstrike.

This plush, sink-in foam sensation which is similar to memory foam, is unique to the Nimbus and unlike any other shoe that I’ve tested.

On that first run, the Nimbus 23 felt padded, protective and really smooth.

The Flytefoam in the midsole of the Nimbus 23 definitely feels less dense and more lively than in any previous version: it’s now closer to the bouncy, energetic Flytefoam Blast foam used in the Novablast.

It’s not the softest ride of any max cushioned trainer by any means: the Clifton 7 is still softer but the Clifton has a more uniform softness throughout its entire midsole.

The Nimbus 23 has an initial spongy layer directly underfoot and then it gets firmer as you get closer to the outsole.

It’s still a dual foam setup with Flytefoam (which is EVA) being the main component. In the rearfoot, on top of the Flytefoam is Flytefoam Propel which is an EVA-TPU blend.

Both foams are very similar in density so the ride feels very smooth and uniform.

Responsiveness is something that I didn’t expect the Nimbus 23 to have but I found it to be slightly springy and I could push the pace below 5.15 per kilometre with relatively little effort.

At 10.9 oz, the Nimbus 23 is not a lightweight trainer but I don’t really mind its weight because it’s designed for easy and recovery runs which is where the shoe shines.

I enjoyed the Nimbus 23 most on relaxed runs at paces above 5.30 per kilometre while middle distances between 10 and 20 kilometres are in the Nimbus 23’s wheelhouse.

I did take them out on a 40km run but by the halfway mark, I felt some foot fatigue due to the softness of the midsole.

After 20 kilometres of running in the Nimbus 23, it kind of felt like I was fighting the foam: like running on a memory foam mattress that was springing back to its original position too quickly.

For me, the Nimbus 23’s work better as a daily trainer than a long run shoe.

It’s perfect for those junk mileage days when you aren’t sure which shoe in your rotation to choose but you know you want something that’s comfortable, padded and protective to get the job done.

When it comes to stability, even though the Nimbus 23 is a neutral trainer, I found it to be decently stable due to its midsole which flares outwards and creates a wide base.

I never had to worry about slowing down when turning corners and I never had to concentrate on striking on the forefoot or rearfoot.

On the outsole, there are two types of rubbers on the Nimbus 23: AHAR on the forefoot and most of the rearfoot with more durable AHAR+ on just the tip of the heel.

Asics didn’t get the rubber placement correct because the lateral heel posterior which is the initial ground contact for many runners, is covered by the less durable AHAR instead of AHAR+.

The Nimbus 23 would have been much more durable had the entire outsole been covered with AHAR+ like on the Asics Novablast.

At the 80km mark I could already see significant wear on the lateral heel posterior which had worn down 2-3mm which is a big concern. Another 80km and the rubber could be worn down right to the midsole foam in that area.

It’s currently monsoon season so I tested the traction on wet surfaces often and unfortunately the Nimbus 23 failed dismally.

Not only did it feel really slippery on wet cobblestone and tile but the rubber got really squeaky and loud when wet.

Running shoe designers take note: THIS is how you do a max-cushioned trainer upper.

The generously foam-filled upper is the text-book max-cushioned trainer upper and it’s not an exaggeration when I say that it’s the most comfortable upper I’ve ever worn.

Everything about it is perfection, from its true to size fit, to its spacious toe box, to its heel lockdown.

Its tongue is thick and padded: the type of tongue I want on a max cushioned trainer- not a flat, racing-inspired tongue like on the Vomero 15 and the MaxRoad 4+.

The biggest difference between the Nimbus 23 upper and other Asics premium uppers is that the Nimbus 23’s tongue is attached to an inner sleeve so that NO tongue slide occurs.

It has taken Asics a while to implement this on their tongues and I’m glad that they’ve finally embraced the new.

A $150 running shoe should feel special when you run in it and the Nimbus 23 definitely does. It has that premium look and feel which is in the same league as the Glycerin, Triumph and 1080.

The Nimbus 23 surprised me and I was excited to put them on and go run every single time. I’ll definitely continue using it as a daily trainer.

What made it so enjoyable was the unique Nimbus underfoot “squish” and its supremely comfortable upper.

The areas I can mark it down for are all related to its sole: its outsole rubber wears down too quickly, it’s slippery on wet surfaces and it’s too soft for long runs.

The Nimbus 23 is still an excellent daily trainer for middles distance runs even though it’s not very durable. It’s best suited to easy paces but it’s also capable of picking up the pace.

I recently reviewed the Vomero 15 and I was disappointed with it because of its firm forefoot which didn’t feel like a max-cushioned trainer.

The Nimbus 23 in comparison is the definition of a max-cushioned trainer: plush and comfortable.

I never in my wildest dreams thought I’d say this about a Nimbus, but I almost had as much fun running in the Nimbus as in the Triumph.

I still think the Triumph 18 is the overall better shoe because it’s more durable and I didn’t get any foot fatigue in it.

The area where the Nimbus 23 beats the Triumph 18 is its plusher underfoot feel which makes it feel more luxurious.

I now understand why the Nimbus is such a popular shoe and fans of the Nimbus series will love the new and improved Nimbus 23.

We purchased a pair of Asics Gel Nimbus 23 from runningwarehouse using our own money. This did not influence the outcome of this review, written after running more than 50 miles in them.

Visit ShopRunningWarehouse.Com
This page contains affiliate links. As an Amazon Associate I earn from qualifying purchases.
WHERE TO BUY
LOWEST PRICE
$110
AVAILABLE ON SALE:Previous model $89