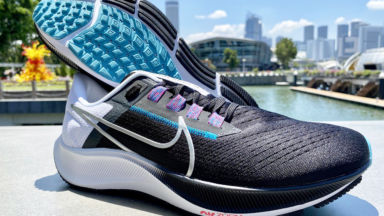 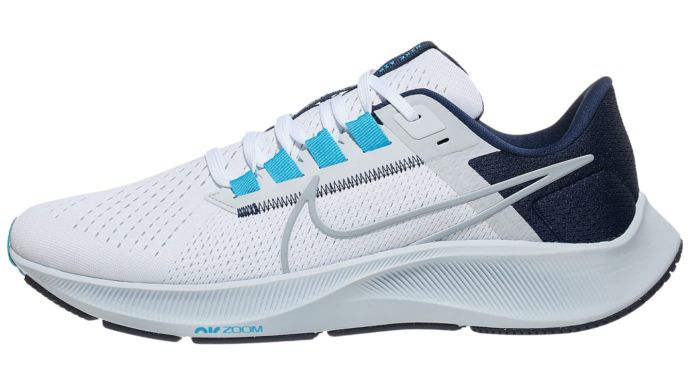 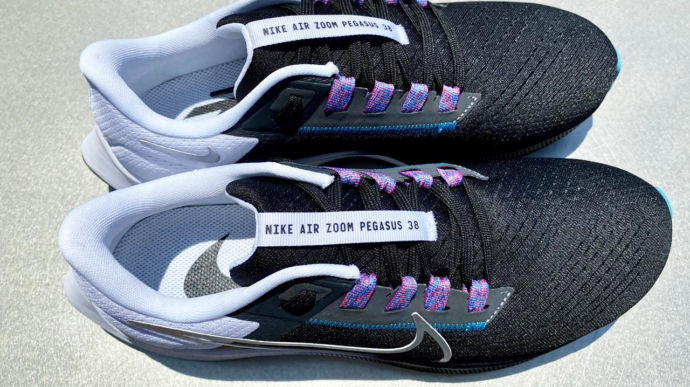 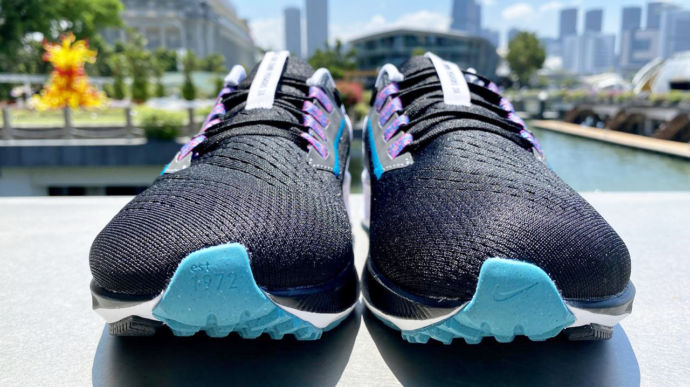 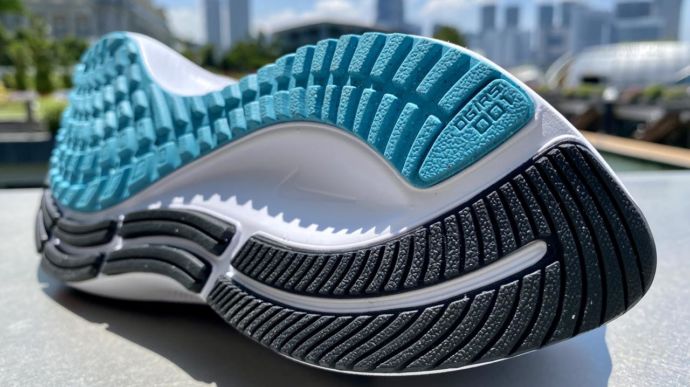 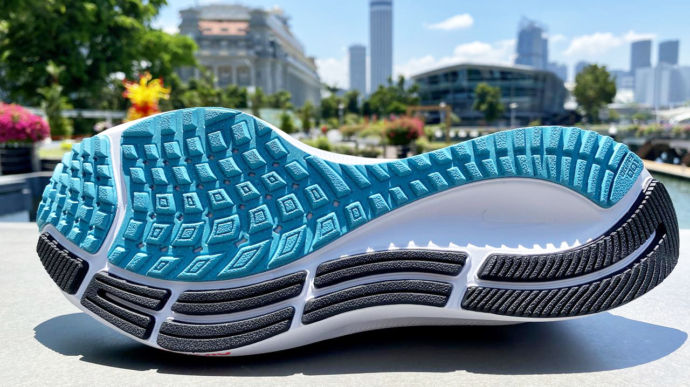 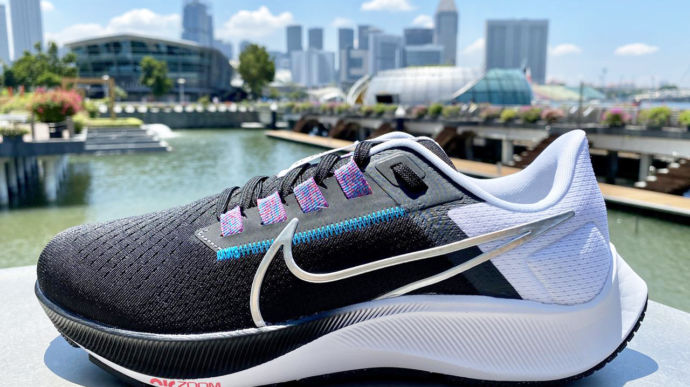 The Nike Air Zoom Pegasus 38 is a very well-built daily trainer which is not as versatile as previous Pegasus models but is soft and cushioned enough for long distances.

Version 38 is an upper only update which fixes the narrow fit and heel slippage of the previous version
WHERE TO BUY
LOWEST PRICE
$120
SHOE INFO
Nike
Brand
Pegasus 38
Model
Cushioning
Type
10.2 oz. (289 gr.)
Weight
120 US$
MSRP
10 mm
Heel Drop
Nike Pegasus
Family
Zoom Pegasus 37
Previous model
WHO IS IT FOR
If you don't buy running shoes often and you're looking for a durable trainer that won't break the bank, the Pegasus 38 is the shoe for you.
Help me choose

The year of 2021 is turning out to be a year of minor changes for Nike with the Pegasus 38, Vaporfly Next% 2, Miler 2 and Infinity Run 2 all receiving upper-only updates.

Most of the running shoes mentioned above didn’t really need an upper update but the Pegasus 37 was in dire need of one.

Its narrow fitting upper caused runners to get blisters on the medial side for their feet while the heel cup was too shallow so it resulted in major heel slippage.

These flaws were very uncharacteristic for the always consistent, ever-reliable Air Zoom Pegasus. When a shoe has been around for 37 years, everyone expects it to be perfect but the Pegasus 37 was far from it.

The Pegasus 37 felt like a rough prototype that should never have seen the light of day and most of the problems were upper related.

The Pegasus 38’s new upper is wider in the forefoot and built on the same last as previous versions of the Pegasus, before the 37th version. It has a new sandwich mesh, a new midfoot webbing system and a longer, more padded tongue.

Nike named it the Pegasus after the winged horse to represent movement, quickness and the allure of flying.

Is the Pegasus still a fitting name for the Pegasus 38 and how does it compare to the other daily trainers?

When I tried it on for the first time, the updated upper felt way softer and more comfortable than the previous version. It fit like a glove.

This is an upper than can certainly compete with the Brooks Ghost and ASICS Cumulus when it comes to upper comfort.

I like the launch colourway of the black/white theme with hints of purple and turquoise. I received a few comments about how great they look when I wore them to my club run.

The first run in the Peg 38 was a 5 kilometre warm-up, followed by a 10-kilometre tempo run.

The first thing that I noticed was that it felt much better during the warm-up, at an easy pace than at faster paces.

At tempo paces, I struggled to go fast in the Peg 38 because of the high level of sink into the midsole.

On that first run, the ride felt really comfortable with plenty of long-distance cushioning but it didn’t feel like the versatile Pegasus models of days gone by.

I find the current Pegasus to have noticeably more cushioning than the previous Pegasus versions due to the softer React foam and the thicker air bag.

Before the Pegasus 37, I wouldn’t even have dreamt of doing a marathon in the Pegasus but with the extra cushioning, it’s definitely doable.

I did a 40 kilometre run in the Pegasus 38 and while it wasn’t a very fun run, it got the job done and offered my feet enough protection from the pounding.

It wasn’t a fun run because the ride of the Peg 38 is very “old school” as the midsole doesn’t provide a lot of energy return compared to newer nitrogen-infused shoes like the Rebel V2 with FuelCell or the Deviate Nitro with Nitro Foam.

The Peg 38 is very cushioned but the downside of the added cushioning in the Pegasus 38 is that the classic, all-rounder, versatile nature of the Pegasus takes a knock.

The Pegasus 38 is much more suited to longer runs at relaxed paces than shorter, faster runs.

I find myself trying to forefoot strike more in the Pegasus 38 than in any other shoe because of the thick airbag situated there so if you’re looking for a shoe that will encourage you to forefoot strike, I highly recommend the Peg 38.

Even though there’s a Zoom unit in the forefoot and not in the rear, the ride still feels very smooth because the rearfoot and the forefoot are quite similar in density so transitions don’t feel disjointed.

When it comes to cushioning, the Pegasus 38 is medium soft, with its midsole density being softer than the Ghost 13, Ride 14 and Miler 2 but firmer than the Clifton 7 and Cumulus 23.

The Pegasus 38 has a comfortable ride so it makes a good daily trainer. I found that it’s best suited to easy runs slower than 5.30 per km because of how much sink there is with each foot strike.

It’s very difficult to pick up the pace in the Pegasus 38 and it also doesn’t help that the insole is so thick and spongy.

The outsole is a classic Pegasus, hard-wearing outsole and is one of the most durable of any daily trainer. I’ve run over 100 kilometres in my pair and there is hardly any visible wear.

It features the signature Pegasus waffle lugs on the main section with crash pad railing all along the lateral side of the outsole.

Traction is fine on dry surfaces but is below average on wet surfaces due to how hard the rubber is.

Under the heel is a deep cavity which saves weight, adds stability and makes the heel feel softer because the foam under the heel can compress downwards.

All the upper issues that plagued the last version have been fixed on the Pegasus 38. The new sandwich mesh offers a softer feel for an overall more comfortable ride but it’s thick and not very breathable.

The soft midfoot webbing system spreads the midfoot pressure across a wider area so it feels much more comfortable than the Pegasus 37 which had separate midfoot bands that were very hard and intrusive.

The thin, racing-inspired tongue that was first introduced on the Pegasus 36 has been replaced with a longer, padded tongue that doesn’t feel out of place anymore and it fixes the two major problems.

The new, longer tongue design does a great job protecting your foot from the lacing pressure and it’s attached to an inner sleeve so there’s no tongue slide at all.

The padded tongue also moves the foot further backwards, towards the heel cup so your heel sits flush against the heel counter and this eliminates the annoying heel slippage that was present in the Peg 37.

The best and most important update is that the forefoot has been opened up so it feels more accomodating and there’s no more pressure point hotspot on the inside of the midfoot that caused rubbing on the Pegasus 37.

The fit is true to size and the regular version is fine for most runners with normal size feet.

The Pegasus 38 is a much needed update, even though it’s only an upper change.

It’s more polished and it feels like this is the shoe that Nike should have launched last year.

Fans of the Pegasus 36 and earlier versions must be warned: this is not the same, versatile all-rounder Pegasus of days gone by.

The Pegasus 38 is more suited to easy runs and struggles with faster-paced runs because of how much softer it is. This workhorse has lost its wings.

I enjoyed taking it out on middle-distance, relaxed runs between 10 and 20 kilometres when I wasn’t worried about pace.

In the Nike lineup, I personally prefer the Miler 2 which is slightly heavier than the Pegasus 38 but has smoother ride transitions and is a better all-rounder due to its firmer cushioning. The Miler 2 can do fast runs too.

We are in the golden age of running shoes and there are a lot of other fantastic daily trainers that are more versatile and offer more fun rides with better energy return than the Pegasus 38.

The main reason you’d choose the Pegasus 38 over any other daily trainer in its price class is durability. It feels like a really well-built, durable trainer with an outsole that could easily do over 1000 kilometres.

It’s also a great option for beginner runners who only want to buy one pair of shoes that has a comfortable fit and will last a very, very long time.

We purchased a pair of Nike Zoom Pegasus 38 from runningwarehouse using our own money. This did not influence the outcome of this review, written after running more than 50 miles in them.