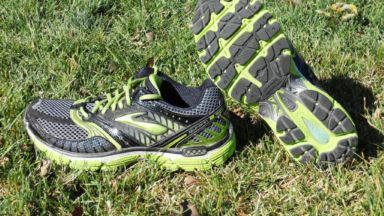 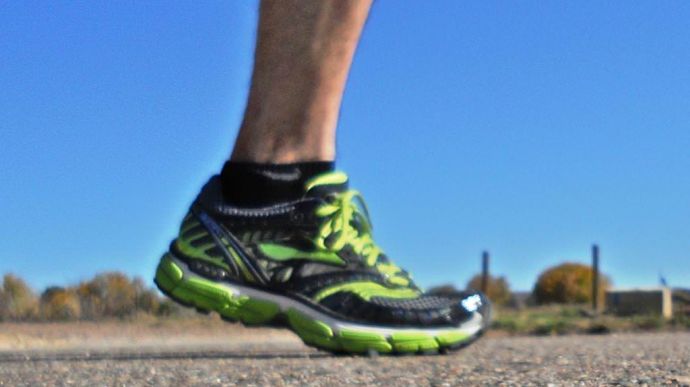 UPDATE: We reviewed the new Brooks Glycerin 10 – check it out!

Brooks continues regular improvements to their full featured neutral trainer and the ninth edition of this model does not disappoint. Brooks kept the best features of the Glycerin 8 and attempted to make this new version more flexible with even more cushioning, incorporating full length Brooks DNA technology. This cushioning system is designed to automatically adjust to the size and speed of the runner and offer a customized level of cushioning. While some shoe manufacturers have tried doing this utilizing computer chips and various other gadgetry, Brooks DNA is comprised of a “Newtonian Fluid” which works to distribute the ever changing forces of your foot strike during a run to cater to you. The idea is that the shoe firms up when you need it to during faster running, and softens during those easy recovery runs.

The Glycerin 9 runs true to size and features a plush interior, roomy toebox, and a snug but comfortable fit. Brooks kept the barely there arch of the Glycerin 8 and the well padded heel collar and tongue. Simple oval laces stayed tied and did not cause any discomfort on the top of my foot. The mesh pattern and overlays of the 9 is almost identical to the 8 save for the heel cup which features rigid plastic overlays.

The upper features a breathable “Element mesh” throughout and the mid foot area has an especially breathable rubber mesh designed to help the foot air out. Overlays are pretty basic and provide a great deal of support throughout the upper. Brooks changed very little about the upper from the 8 to the 9. Reflective highlights are a nice added touch for winter running and they are strategically placed on the toe and heel of the shoe.

The heel of the Glycerin 9 is significantly stiffer and more built up than in past incarnations. This is very noticeable at first, but less so once I had a few runs logged in the shoe. Overall, this is the kind of construction and durability that any Brooks wearer has come to expect over the years.

Brooks changed things up a bit by offering full length DNA cushioning gel pods throughout the entire shoe rather than just in the heel and forefoot of the 8th edition. The midsole also contains Bio Mogo, Brooks environmentally friendly EVA foam which is both resilient and highly responsive.

The midsole contains very little arch support which may bother some runners needing some additional support. True neutral runners will likely appreciate that the lack of arch in this shoe improves its flexibility a great deal. The softer Bio Mogo is cradled within the firmer DNA layer which creates a nice energy return on foot strike.

I have been impressed with the DNA cushioning in the past and it does live up to its billing as an adaptable cushioning technology. It is designed to firm up for heavier runners and stay malleable for lightweight runners.

The midsole also features a thermoplastic unit right in the mid foot of the shoe which is aimed at decreasing twisting throughout transition from heel to toe. This is a feature used by many shoe companies on their high end models and unfortunately this “DRB Accel” greatly deceases flexibility in the shoe. The positive aspect of this feature is that a minimal pronator could get by with the Glycerin 9 as it offers a touch of support.

Brooks lowered the overall height of the shoe by 2mm but maintains the same heel drop of 12 mm, which the running shoe industry at large is now seeming to question. A heel striker will appreciate this feature but a mid foot or forefoot striker may feel that the bulkiness of the heel gets in the way.

The outsole of the Glycerin 9 is almost identical to that of the 8. The outsole is split into compartments to aid in flexibility which is impeded by the rigidity of the plastic midfoot shank. The carbon outsole is very durable and I did not notice any significant wear on the outsole.

The Glycerin 9 is a maximum feature neutrally cushioned shoe designed to provide the runner with a plush ride and some support for high mileage. Brooks states that this newest version adds more cushioning with improved flexibility over the 8th version.

What Brooks did that is very impressive is that they designed a very plush shoe and cut an entire ounce off the last version. The full length DNA in the midsole does seem to add additional firm but responsive cushioning However, the claims at increased flexibility appear to be just a placebo effect in my opinion. The segmented outsole is completely impeded by the torsion bar placed in the middle of the shoe and flexibility test comparisons to other high end neutral trainers put the Brooks Glycerin 9 a bit on the stiff side. Brooks has always made fairly substantial, and might I say stiff trainers (save for their trail shoes and racing flats), but it would seem that in the current climate of running shoe manufacturing towards allowing for more natural foot movement this torsion bar may be overdoing it.

The Brooks Glycerin 9 may offer more support than other top of the line neutral cushioning shoes which may make it an option for runners needing some structural support.

Brooks continues to be the leader in ecologically designed running shoes as they are the only running shoe manufacturer with biodegradable midsoles in their entire line of running shoes. Their BioMoGo material biodegrades 50 times faster than those of other manufacturers and the knowledge that your worn out trainers aren’t existing in a landfill for the next 20,000 years should make you feel good.

Similar Shoes to the Glycerin 9

We thank the nice people at Brooks Running for sending us a pair of Glycerin 9 for testing. This did not influence the review of the shoe, written by running more than 100 miles in it.