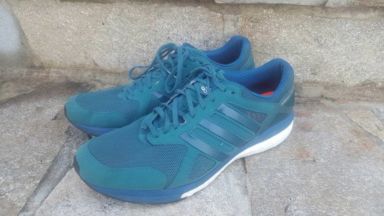 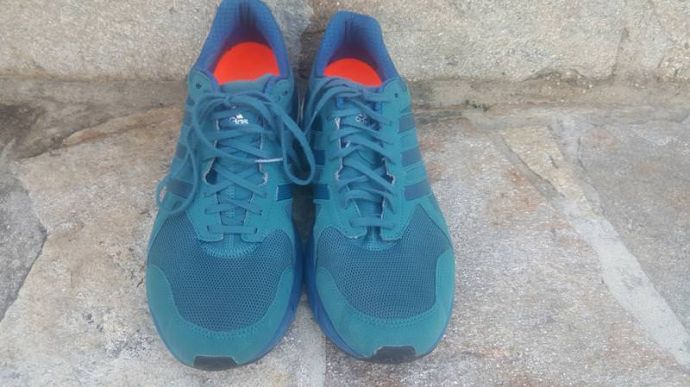 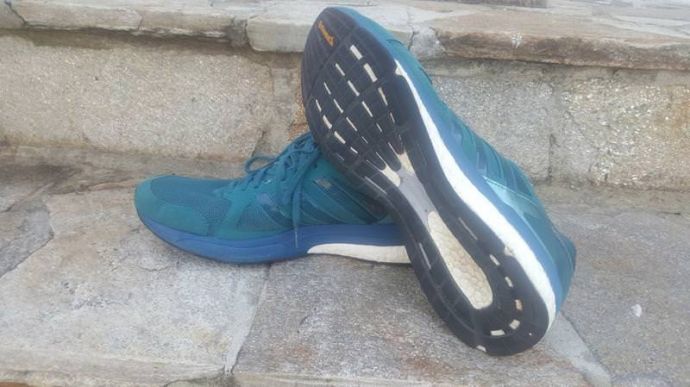 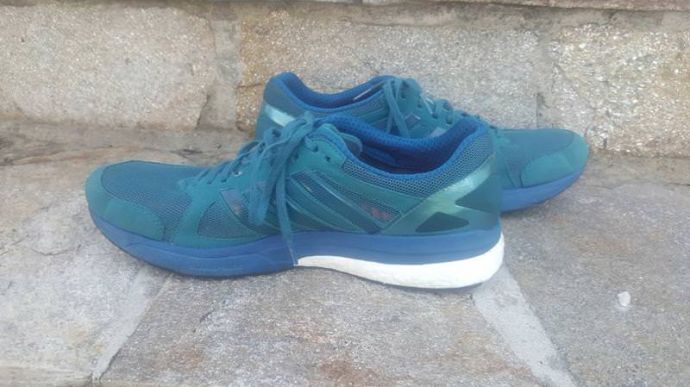 The Adidas Adizero Tempo 8 is the shoe you’ll run your next PR in. It is light, responsive and fast giving you just the right amount of support along the way.
WHERE TO BUY
LOWEST PRICE
$120
SHOE INFO
Adidas
Brand
Adizero Tempo 8
Model
Stability
Type
9 oz. (255 gr.)
Weight
120 US$
MSRP
26 mm
Heel
10 mm
Heel Drop
Adizero Tempo Boost 7
Previous model
WHO IS IT FOR
This is a shoe for advanced level runners that need a dash of support. It excels in shorter distances and is great for marathon training.
Help me choose

Adidas brings another great performance model to the table.

Short of new upper material, the shoe remains the same from its predecessor, which had more of an overhaul. It is very true to its name, being an ideal pick for race day and tempo day.

I have worn many pairs of Adidas over the years but never ran in any of them. I was impressed with how these handled and managed to pick up some PRs both in training and in a race.

This is the 8th edition of the Adizero Tempo. It is true to its name; ideal for hard workouts and races. It offers just the right amount of support for those needing to counteract against over pronation.

Adidas has a very, very vast line of products with Its iconic trio of stripes transcending into fashion as well. Strange enough, this is not currently shown as available on their website which I found strange.

With that said, It is still a staple on many runner specific shopping areas such as Runningwarehouse and Road Runner Sports. In terms of competition, it goes against shoes such as Saucony’s Fastwitch, ASICS’ DS racer and DS trainer lines.

First impressions were incredibly positive. It looked sleek yet reserved. I was a huge fan of the colorway and one of the first things I noticed was the continental tag attached to it promoting the sole.

They felt pretty tight when I first tried them on. I even had to switch to thinner, synthetic wool socks so they would actually fit. Thankfully they were flexible and I could tell that the material would stretch out.

One of the first things you’ll notice in the sole is that Adidas has partnered with tire company Continental to promote an elevated level of traction. The treading pattern is reminiscent of a tire which I thought was a nice touch.

The tire-like treading of the outsole works together with Boost technology on the midsole. It is soft to the touch, but translates into a firmer ride giving a springboard like feel. This was perfect for me as it helped counteract my overpronation.

This made the shoe very responsive in normal conditions, but it did not deliver as it promised in bad weather. Some of my wetter workouts I did not feel completely in control and felt like I was sliding when lifting off.

Despite a higher 10mm drop, you will find yourself naturally moving forward and faster . I naturally felt my forefoot and midfoot doing most of the work during runs in these. My calves were getting their money’s worth thanks to this.

Because the ride pushed me forward, I had a some issues going downhill at full speed. I felt like I was losing control because my forefoot did most of the work.

For control from falling, I rely on the rear part of my midfoot and heel and it was difficult to do that in these. This was minimal thankfully.

The upper stays pretty much the same from last year with the exception of updated mesh material. It is nearly see through in the toe box and sides of the feet. There was a mixture of synthetic material and suede overlays throughout.

The toe box does stretch overtime, but it is a very tight fit at first. I recommend buying half a size up.

The tongue and lacing have a ‘booty’ construction which provides a glove like feel.

One complaint I had about this was that the tongue felt way too short. I had to pay special attention to when I laced up the shoe to make sure I didn’t tie the laces over the tongue. Thankfully, it did not ever slip out of place while I ran.

I started my testing using them in a rotation of shoes that have varying levels of support; this being the lightest one. I ended my testing seeing how they would work as an everyday shoe.

I experienced more positive results using them in a rotation versus as a primary shoe. Using it as an everyday shoe wore on my body. I felt sore using them on consecutive days.

The timing of me getting this for testing coincided with the beginning of my race schedule for the Spring. My first victory in them was being able to go under 20 minutes in a 5K; something I have been meaning to check off my list of goals for a while now.

My tempo runs in them were quick and efficient and they helped me prepare for a marathon I had been training for all winter. I ALMOST did the marathon in them, but decided against it as the shoe wore hard on my body after about 10 miles.

Even then, with how they worked for me in training, it allowed me to cut over 3 minutes off my PR.

All in all, this is a perfect shoe for my style of running and level of training.

It remains a staple in my rotation and I look forward to using them for a long time.

We thank the nice people at Adidas for sending us a pair of Adizero Tempo 8 to test. This did not influence the outcome of the review, written after running more than 50 miles in them.