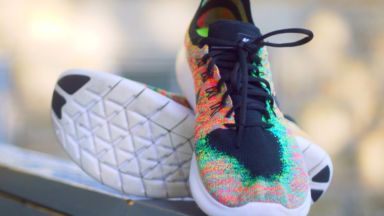 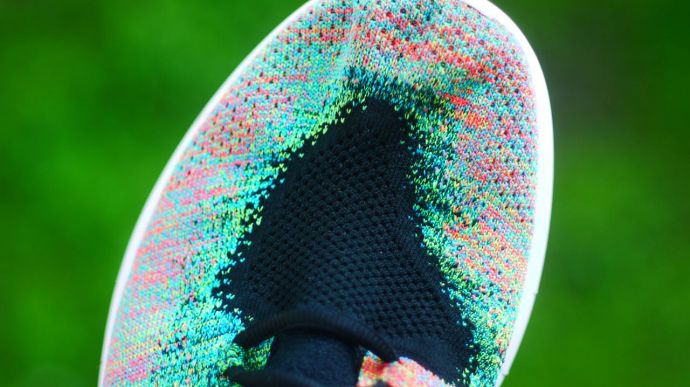 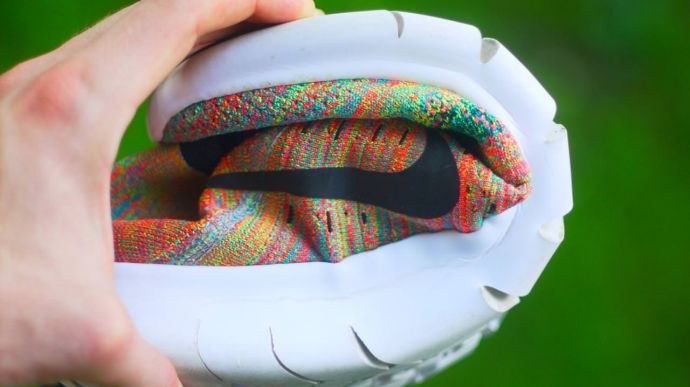 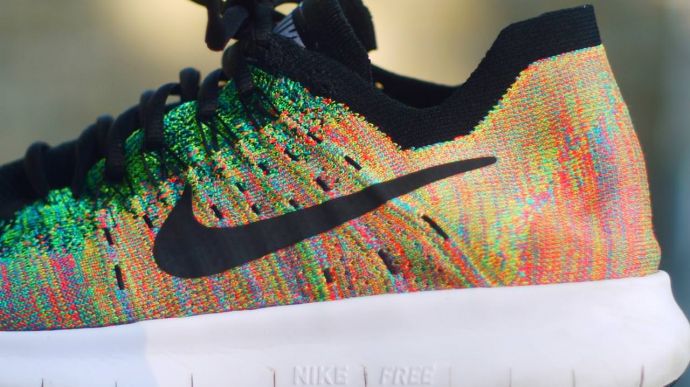 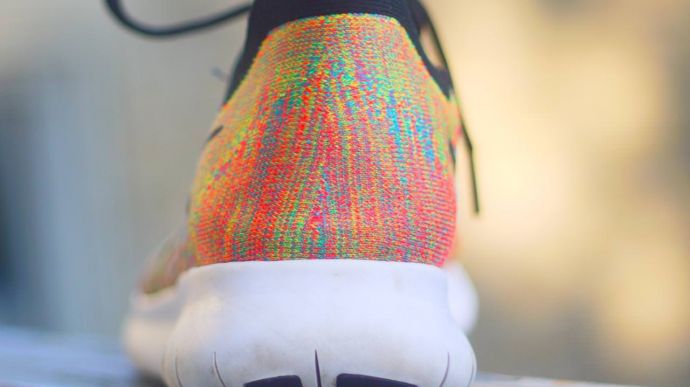 Nike’s Free RN Flyknit 2017 is a lightweight daily trainer that wraps around your feet and flexes freely with your movements. It makes a few changes to the previous model, but keeps the soft outsole and flexible upper to give runners a pleasant and smooth ride.
WHERE TO BUY
LOWEST PRICE
$120
SHOE INFO
Nike
Brand
Free RN Flyknit 2017
Model
Lightweight
Type
7.30 oz. (207 gr.)
Weight
120 US$
MSRP
8 mm
Heel Drop
Nike Free
Family
Free RN Motion Flyknit
Previous model
WHO IS IT FOR
The Nike RN Flyknit 2017 is best for runners who want a casual trainer that almost blends into their socks and gives a soft platform to run on. Due to the shoe’s flexibility, it’s not great for speed work or runners who want a very snug fit.
Help me choose

With an 8mm offset and 8.2 oz (Men’s 10) weight, you’re getting a fairly light shoe that tries to give you a barefoot running experience.

The $120 MSRP is a pretty average price for a daily trainer, although you will probably get more mileage at the same price with other daily trainers that use more rubber and harder materials in the upper.

Similar shoes to the Nike Free RN Flyknit 2017 shoes are Nike’s own Free RN Motion Flyknits which feature a taller ‘bootie’ for your feet and a more open outsole design.

The Skechers GORun 5 shares the minimal use of rubber on the outsole with a knitted upper and lightweight design, which might be a good choice for runners who want a faster shoe.

If you’re primarily interested in the Free 2017 shoes for the casual styling and soft feel, you might want to try the Under Armour Speedform Slingride shoes which share the flexible upper and soft outsole, but have an even more minimalist upper that’s so smooth you can wear them barefoot.

This is the Nike Free RN Flyknit line, which shares many design features with the Free RN, Free RN Motion Flyknits, and even the Free RN Commuter shoes. Let’s break down the name of the shoe and learn what it’s designed to do.

The “Free” section of the shoe name is really the core part of the shoe. It represents Nike’s attempt to make a barefoot feeling shoe where the runner feels “Free” even when laced up.

The “RN” in the name just indicates this shoe is designed for running, rather than just for general training. Lastly, “Flyknit” means this shoe is made from a knitted and stretchy fabric that’s virtually seamless.

You can see a few design changes in the upper when comparing the 2017 version to the 2016 version.

Nike smoothed out the channels that the Flywire cables run through, slapped a slick (and reflective) logo over what used to be a meek looking printed logo, and updated the knitted pattern around the toebox.

The sole+outsole remains essentially unchanged, so you might want to consider getting the 2016 model if you like the feel of the Free shoes and don’t mind missing subtle upper changes.

When I got the box from Nike, I was expecting either a super bright neon color to say“look at me I’m a runner”, or a laid-back casual color scheme that would let this shoe blend into everyday wear.

I ended up getting nearly ALL the colors in the rainbow doused upper. If you’re not ready to wear shoes that look like they’re from a Color Run, Nike has you covered in a few other normal colors and Nike even lets you design your own shoe if you don’t see what you want.

After getting over the rainbow coloring, I laced up the shoes for my first run. The shoes had the same familiar Free feeling: very flexible and light.

I tried to get a tight fit since I felt a little slop in the toebox, but the lacing system doesn’t really let you do that. I suppose that’s a good thing for runners who want unrestricted toe movement without wearing toe shoes.

I put in a little over 50 miles in these shoes and came back to finish this review and figure out how “free” feeling these shoes really are.

Your outsole, midsole, and topsole are effectively just one piece of foam in the Free 2017 shoes. Nike does dab a dash of rubber on the edge of the toe and back of the heel to add some extra durability + traction.

The rubber underneath your big toe and top of the toe makes sense, as a normal stride push off this section. The rubber near the edge of the heel on the other hand is puzzling.

You should not be heel striking in a shoe designed for barefoot running. My theory is that Nike put that oddly placed piece of rubber on the heel just to appeal to the running crowd that does not trust a full foam outsole.

The rest of the outsole is a grid of triangular cuts along triangular depressions (tri-star design) which gives the sole the signature free feel.

The sole will flex as you bend your toes, twist with any rotation of your feet, and bend over any bumps in the road.

It’s not as much flexibility as the Free RN Motion Flyknits I tested a while ago, which I found to be too much at times.

Nike doesn’t say which foam they use on their site, so I’ll say it feels more squishy than regular EVA foam and stiffer than Nike’s soft Lunarlon foam. I went on a few long runs (10+ miles) and found the sole stayed pretty comfortable.

The design of the sole lifts the toebox up slightly which takes a little time to get used to. I found the shoe to run about a half size large, so consider getting a smaller size if you don’t want a roomy toebox.

The sole underneath the midfoot is smooth with a little extra under the arch, and the heel of the sole is slightly rounded to prevent your foot from rolling off the edge.

Flyknit makes up most of the upper and I’d bet Nike manufacturers almost the entire upper on one machine, with just a few extra steps to add the logo, reinforcement in the heel, and lacing system.

The big benefit to this knitted fabric is that it allows the upper to seamlessly transition into different types of knitted patterns for customized levels of breathability and durability that stick close to the foot.

Nike tightly weaves the threads together near the heel and have support inlay to act as an internal heel counter for structure and some support.

Nike then spaces out the threads a little around the sides of the shoe to let the Flywire strings weave up to the laces, and finishes the knitted upper around the toebox by opening a few holes in the top for extra airflow.

Quick note on the swoosh logo: it’s a smooth patch of reflective fabric that’s on both sides of the shoe, but does start to peel a little at the corners when approaching 100 miles.

Holding your feet in this flexible shoe are the dual Flywire cables that run up to each lace loop which do a good job of keeping your middfoot in place.

Laces loop into the tops of the Flywire cables and then slip through holes in the upper to tighten everything in place.

Interesting to see that Nike didn’t reinforce where the laces loop through the upper, as they do this on their Lunar Tempo shoes.

Other shoe companies reinforce the lace loops, like Saucony who put a thin overlay over the lace loops as seen on many of their shoes, such as the Freedom ISO.

This overlay gives you almost the durability of an eyelet without the bulk, but maybe Nike decided the Free 2017 shoes don’t need to be that durable.

I’m a fan of low profile tongues, so I was pleased to see the thin tongue grace the top of these shoes.

You can’t get away with thin tongues on shoes that don’t have a great lacing system since you’ll have pressure points on the top of your feet. Not the case with the Free RN Flyknit shoes, they do well with the thin tongue.

Actually, the entire upper is basically thin everywhere, including the heel which I found to be just a little bothersome.

Since the heel has no meat to it, you can wiggle around in it without much resistance and sometimes make the top ridge of the heel near the achilles fold onto itself. Not a big deal, just something I hope to see fixed on the next model.

Did I really feel the same kind of barefoot freedom while running in these shoes? No, but I did get much more freedom than your average trainer while still enjoying a cushioned ride in a smooth fitting package.

You should consider these shoes if you want the newest styling from Nike in a flexible shoe and you don’t need the most snug fit.

Save yourself a couple bucks and get the previous model if you can, but either version should make you a happy runner if you liked everything mentioned.

We purchased a pair of Free RN Flyknit 2017 to test at full retail price from RunningWarehouse. This did not influence the outcome of the review, written after running more than 50 miles in them.