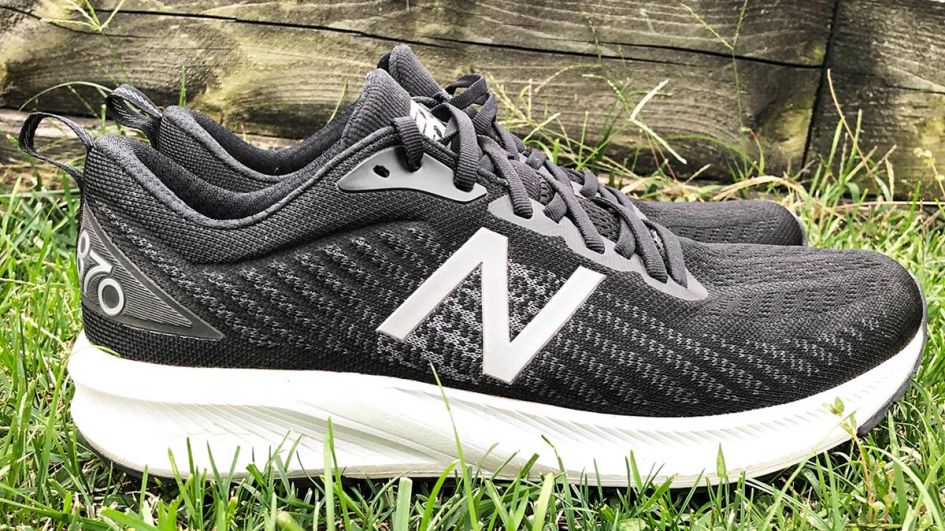 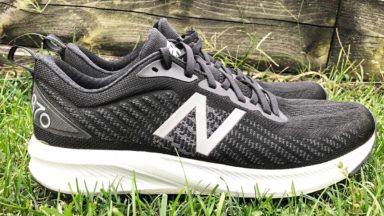 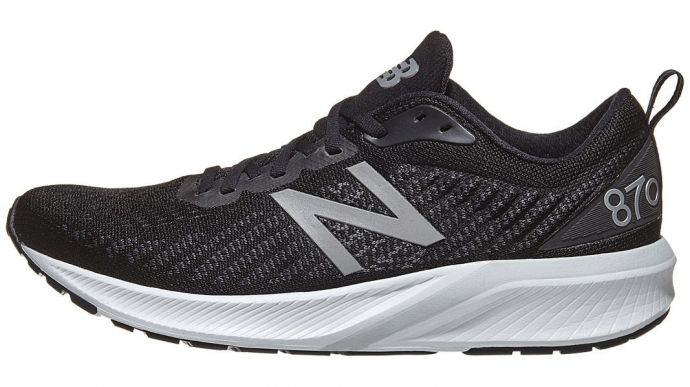 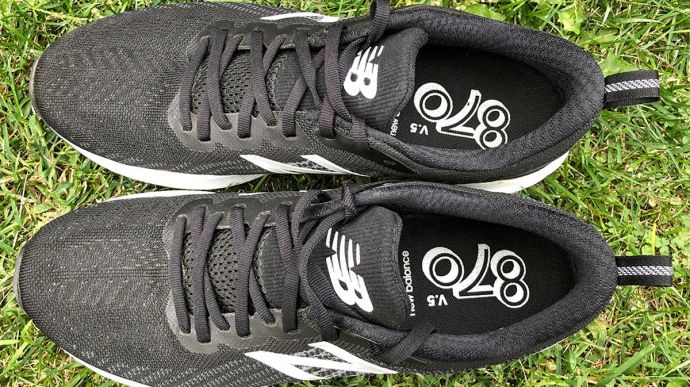 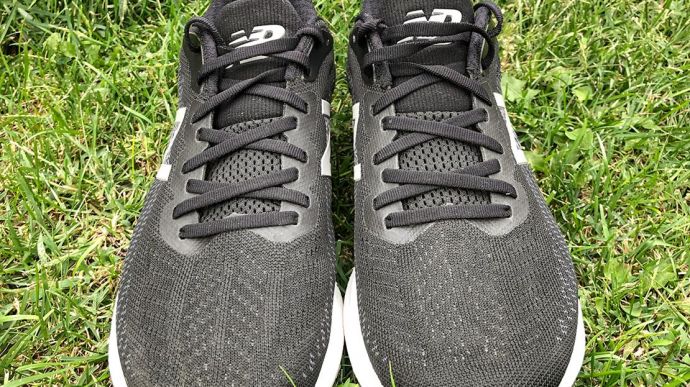 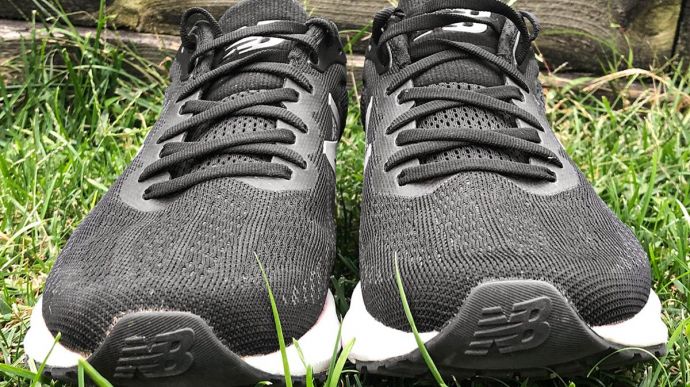 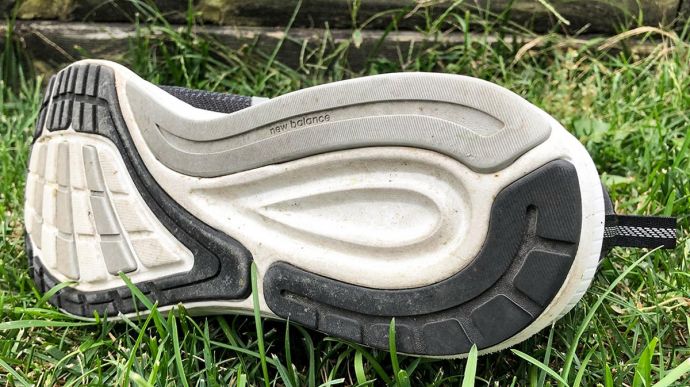 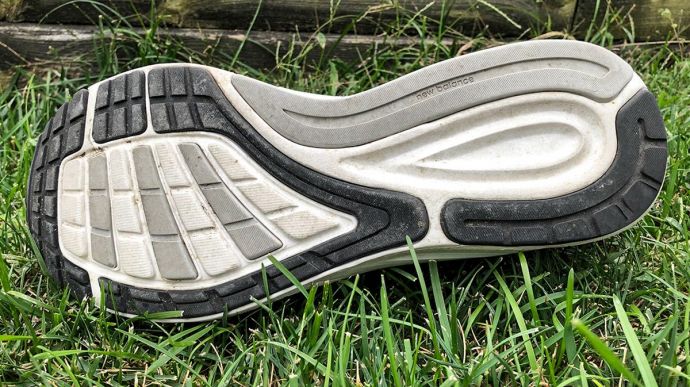 Coming back from a four-year hiatus is the New Balance 870v5, a lightweight stability trainer meant to be an everyday trainer built for speed and distance. This is the fifth edition of the shoe.

New balance has developed many new technologies and even lines of new running shoes since the last 870 came out, so to bring it back must mean they felt like they were missing something.

The 860 provides moderate stability while the 870 is the lightweight stability option.

The 870v5 competes with the ASICS Gel DS Trainer, Saucony Liberty Iso, and Brooks Asteria retailing for $110. All of these provide comparable stability to 870v5. They all are lightweight stability trainers.

Upon the first glance out of the box, they instantly looked like shoes I could wear both out on a run and around town running errands.

The design was simple yet sleek with an upper of primarily black with some hints of gray sprinkled in.

If you look closely, you will see some patterns and depth throughout the upper. This added much needed visual interest to otherwise black shoe.

When I slipped them on the first time I was surprised by the firmness of them. I know I would need to adapt some to the 870v5 because I have been running in moderate to max stability trainers for the last year.

Along with the firmness, I felt there was also a stiffness to the shoes. I wore these around the house and to work a couple of times before I did my first run in them.

My first run out of the box was a relaxed 6 miles outside. It was a firm and stiff ride with a little extra pressure on my arch due to the fit of the shoe.

I was hoping this wasn’t a sign of what was to come with the New Balance 870v5.

Let’s start from the ground up. The outsole of the New Balance 870v5 looks quite a bit different from the previous version. The outsole is made from EVA ground contact outsole which is a durable material used in many running shoes.

The outsole thread did struggle with traction in wet conditions or non-road terrain.

This compound gives you a firm foundation that is responsive but lacks energy return on the toe-off. This results in your legs needing a little more recovery time.

The medial post is made from a higher density foam. The medial post sits between the arch and heel of the foot. This medial post’s location took some miles getting used to because of how firm it was.

This is a strength of the sole unit because it makes for smoother transition from strike to toe off along with allowing you to run at a faster pace more comfortably.

The upper of the New Balance 870v5 looks and feels quite different than the previous version. This is a result of the 4 years between the two editions and all the new technology New Balance has developed since then.

The upper is made from engineered knit, the same material used in the rest of the 800 series.

The upper is seamless which prevents any areas of irritation. The New Balance 870v5 runs true to size with more a narrow fit from midfoot to the toebox.

Like many other stability offerings, the tongue of the shoe is connected to the sole unit with an elastic-like material. This allows the shoe to be more form-fitting and adaptable as you run.

Finding the right balance of pressure from that aspect and tying the laces just right could take awhile. I found myself retying the shoes on the first few runs because they were too tight or too loose.

One drawback of the upper was the heel counter. With such a firm and responsive sole unit, you need a heel counter that locks your foot in place, especially when you dial up the pace.

The heel counter lacks the structure and cushioning to do that. This combined with the struggle of tieng them resulted in a heel fit that was loose.

This improved over time as I put more miles on them but was frustrated at the start.

The 870v5 were the second New Balance stability trainers I have reviewed. Last year I reviews the 860v9.

In my reviews for those, I said “The New Balance 860v9 struggled to give me that satisfied feeling after every run in them. Some runs felt fantastic while others left me disappointed.”

I can honestly say the 870v5 left me with the same impressions.

From the moment you slip them on you notice a firm and responsive feel from the simple sole unit. Composed of a higher density foam medial post and Ground Contact RevLite.

This combination had some advantages like the low weight and giving your feet a firm foundation. This firm foundation along with 6mm heel to toe drop I found myself pushing the pace on my runs.

The firmness and location of the medial post caused some discomfort starting out but when away with time.

The upper of 870v5 was as simply constructed as the sole unit of the shoe. A fashionable engineered knit upper was both durable yet breathable for all of my runs. The visual design was simple and sleek.

I ended up wearing them out and about as much as I wore them on runs. Unfortunately, the heel counter was a big drawback for me because it wasn’t as structured as I would have likely which resulted in a loose-fitting heel where slippage occurred.

The New Balance 870v5 retail for 110 dollars which places them on the cheaper end of the lightweight stability trainers. The lower price point may get new runners to give them a shot.

I enjoyed them once they were broken in, I just felt like that took longer than normal. These shoes would not be my goto daily trainer but I could see them as a reliable option for days I wanted to pick up the pace.

Overall, my feelings were ambivalent about the New Balance 870v5. They were a reliable no nonsense stability trainer once I had 25 miles in them, but I had discomfort and struggles to get to that point of enjoyment.

With new shoes coming out with innovations that are supposed to revolutionize running, it is refreshing to see a simple stability trainer built on tried and true technologies make a comeback.

The New Balance 870v5 will not be for everyone but If you are a runner who yearn for the simpler stability days, this shoe may be perfect for you.

We purchased a pair of New Balance 870v5 from runningwarehouse using our own money. This did not influence the outcome of this review, written after running more than 50 miles in them.