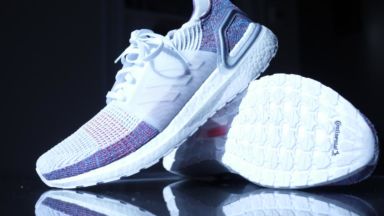 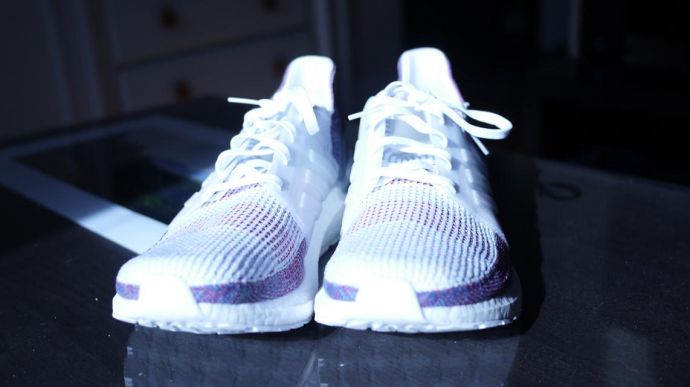 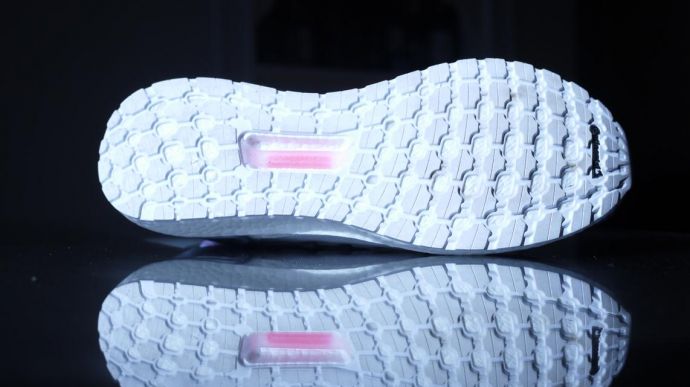 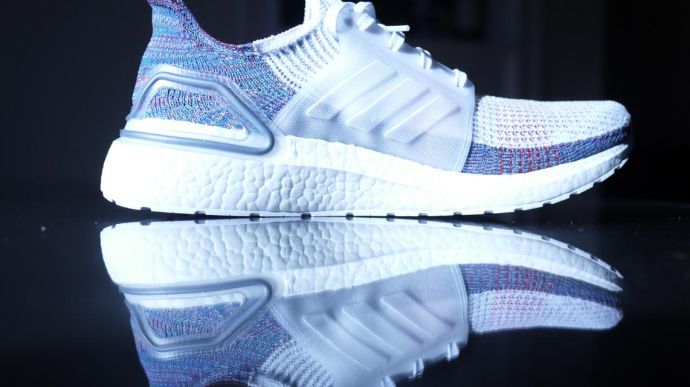 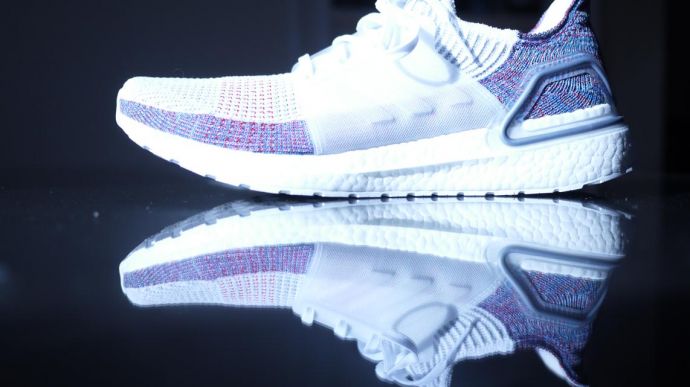 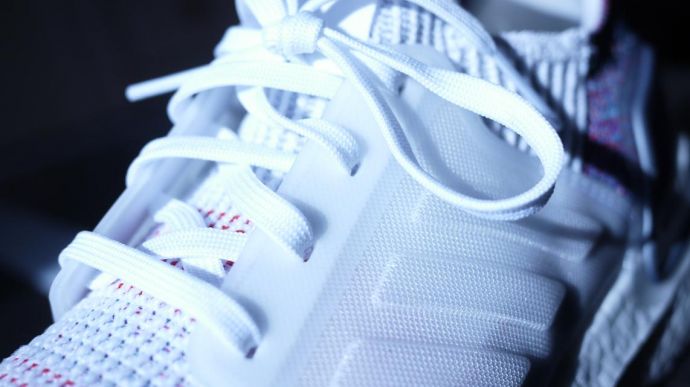 Adidas had the advantage over most other shoe companies with their Boost midsole, but they’re now drifting away from making the Ultraboost shoes a top tier performer in favor of making it better for the general casual gym goer.
WHERE TO BUY
LOWEST PRICE
$91
SHOE INFO
Adidas
Brand
UltraBOOST 19
Model
Cushioning
Type
10.9 oz. (309 gr.)
Weight
180 US$
MSRP
10 mm
Heel Drop
Adidas UltraBoost
Family
WHO IS IT FOR
This shoe is for those that have no price limit on running shoes and who want something that is comfortable outside of running. The shoe will do a decent job supporting training of all levels.
Help me choose

This Ultraboost 19 shoe has an impressive 29mm heel and a 19mm forefoot built up from Boost foam which gives the shoe an energetic feel.

Featuring a Primeknit upper and a 3D heel frame, the shoe comes in at a moderate weight of 10.9 ounces.

Other shoes using a very responsive midsole material paired with a smart fitting upper would be the Saucony Freedom Iso at 9 oz, ISOFIT upper and EVERUN foam; and the Nike Epic React Flyknit 2 with a Flyknit upper, Epic React foam, and a sub 9 ounce weight.

Most shoes in the same field as the Ultraboost 19s are generally both cheaper and lighter, so Adidas is likely assuming the benefit of Boost foam combined with the designs of the upper attract runners.

First impressions? I wanted to be seen wearing these shoes. Nothing looks like them on the market right now, and for good reason.

The shoe is striking with a large exposed foam midsole, a complicated knit pattern (mine was “cloud white”), and a white outsole.

Although there are different color combinations of the Ultraboost 19s, many of them have a bright upper and white outsoles.

The reason why this stands out is because it’s rare to see a bright white shoe because they get dirty so fast! It took just one run in the shoe before I spoiled their perfect image.

Lacing the shoes up for the first time was simple. The upper is an elastic bootie that has no tongue (or an integrated tongue depending on how you look at it) with a flared out heel.

You tighten up the shoe with fairly thick laces that weave into a plastic patch that grips your foot onto the shoe.

Then you realize you can still wiggle your feet around a bit. Perfect for walking around, sitting, but becomes an issue when you want the shoe to feel responsive on quick runs.

The Ultraboost 18 had these similar notes, where the shoe felt sloppy at high speeds and overly bulky at the same price point.

The design of the 18s was subtly different though, where the lace system went into thicker plastics, the heel counter was made more solid, and the upper was less elegant.

If you are looking for a real speedy shoe in the Adidas line that uses Boost foam, check out the Adizero SUB2.

I got this pair of shoes with the Nike Epic React Flyknit 2 shoes, so my testing not only included seeing how good this show was, but seeing how it stacked up against one of it’s bigger competitors

Boost foam is great, we’ve figured that out.

It’s better than standard EVA foam, and many other proprietary foams from other companies due to the fact that Boost foam returns more energy, lasts longer, and behaves better across temperature extremes when compared to most other foams.

But there’s a lot of Boost foam on the Ultraboost shoes. Can’t complain too much there since the shoe’s name literally says “Ultra”, but you should be aware that most runners will not need this much foam.

The Adios Boost, and Boston Boost shoes all use less foam while coming out as a fantastic trainer. The Ultraboost 19 though sticks to the large 29mm heel.

Apart from the Boost foam, there’s a rigid polymer bar below the midfoot that stiffens the shoe and helps your toe-off.

Adidas names it a Torsion Spring, seems to help the shoe’s turnover when running as I didn’t feel like I was losing much energy when running.

The Boost foam isn’t rugged enough to hit the pavement, so Adidas layers a full-length rubber outsole made by Continental.

Previous versions of Continental rubber on Adidas shoes have been extra squeaky on tile/hardwood surfaces (similar to a car tire on tile/hardwood) which honestly isn’t a thing to worry about, but good to know if you want to wear it around the house.

This version of Continental rubber is much better on those surfaces. And it’s still durable, I saw no premature signs of wear after my 90ish miles of running before I wrote this review.

What I thought was odd was the glue blobs along the edges of the Boost foam that must have dripped out from underneath the rubber during manufacturing.

Didn’t affect performance, it’s just not the quality you want to see in a shoe at this price point.

But how does it feel!? The sole felt mildly bouncy, grippy on asphalt, kept my foot centered on my stride, and never got too much in the way of any workout.

It did feel sloppy at higher speeds (say sub 6 min miles) and didn’t give me a great sense of stability if I had to do fast lateral movement (don’t wear these for basketball).

I’m not entirely sure if this is an industry first, but Adidas says their manufacturing technique for this shoe results in a one of a kind pattern.

It’s mostly just a set pattern with a few permutations of say having blue/red fabric shifted around, but still neat to know this shoe can do this.

However, this doesn’t help make a better running shoe. What does, is simplifying the upper to reduce pressure points. Adidas calls their Primeknit 360 a seamless “second skin”.

The design of it is pretty neat, where it changes thread densities around the foot and the fabric pattern even continues below the insole. The upper does envelop your foot, but the fabric is too flexible in my opinion.

It’s a design choice Adidas refuses to retire since they brand their logo right onto that overlay. I dislike it so much since it’s a non-breathable plastic “clamp” that doesn’t provide as good of a fit as many other lacing systems.

I would not call it painful by any stretch, but you should be getting a better for at $180. Add in the fact that the laces are very rigid/not stretchy and you have a tough time setting these shoes up for a quality fit for running.

I know my frustrations with the upper is an unpopular opinion as previous versions of this shoe often get decent user reviews, and I see where they’re coming from.

I love wearing this shoe just walking around or while on an easy jog, but I feel like I’m piloting a mega yacht when I take them on faster runs.

My last quick run in these shoes started with 9 miles dropping from 7:40 to 6:40 pace. I could tell the upper was feeling loose in the toes and heel when I was pushing it.

When I got into the last 3 miles at the 5:30 pace, I was putting in a conscious effort to keep my strides from feeling sloppy.

Adidas knows what they’re doing. They have an eye-catching shoe that feels comfortable when lacing them up in the store, and the shoe has a price point that suggests you’re buying something at the top of it’s class.

The truth is this shoe doesn’t compete at the same level as other $180 or even $150 trainers, but Adidas is ok with that because this is more of a fashionable shoe than a performance shoe.

It’s not a bad shoe, I just don’t think the price makes sense for what you get.

We purchased a pair of Adidas Ultra Boost 19 from runningwarehouse using our own money. This did not influence the outcome of this review, written after running more than 50 miles in them.

Visit ShopAmazon.com
This page contains affiliate links. As an Amazon Associate I earn from qualifying purchases.
WHERE TO BUY
LOWEST PRICE
$91