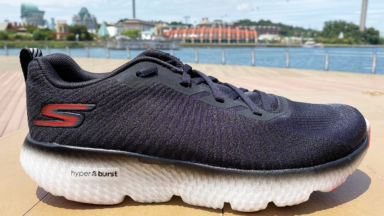 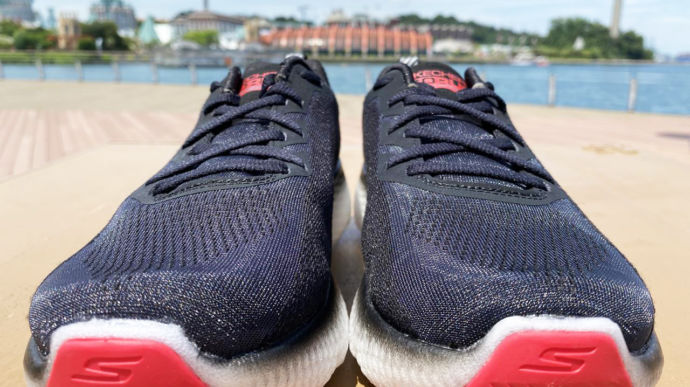 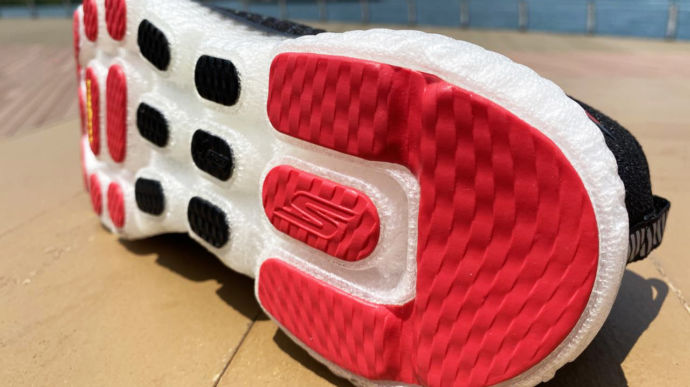 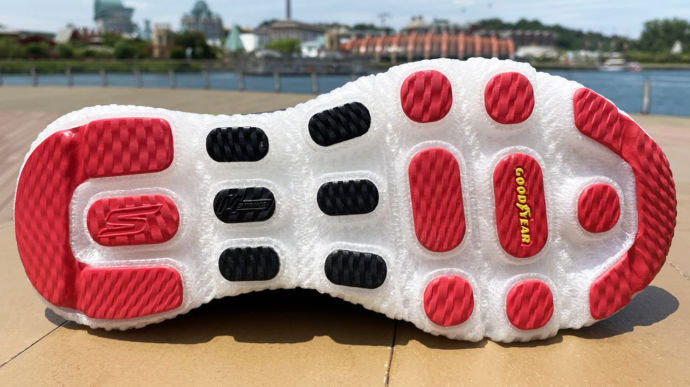 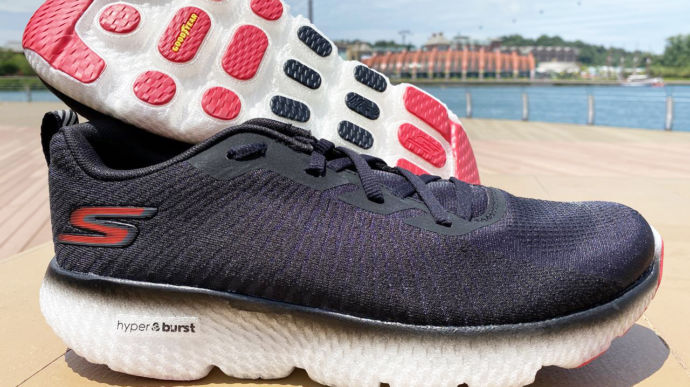 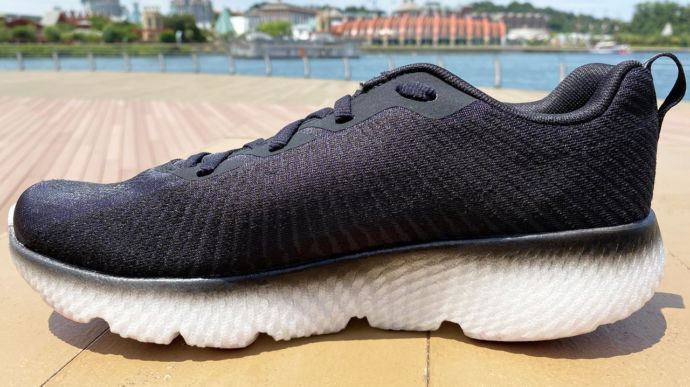 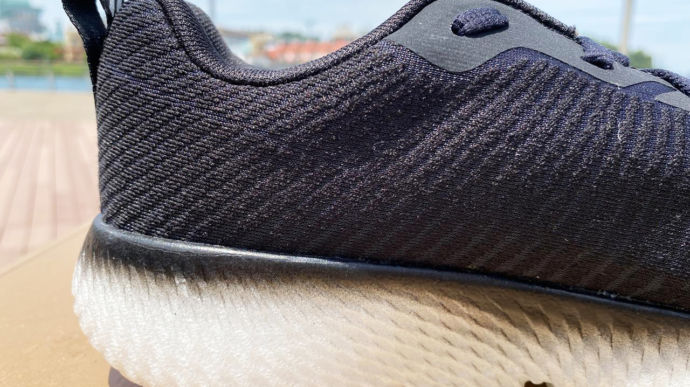 The Skechers MaxRoad 4+ is a highly cushioned long-distance trainer which can also be used for fast runs because of its super light weight.

Version 4+ has been updated with Goodyear outsole rubber and an improved performance upper which makes it an overall better trainer and a worthy upgrade.
WHERE TO BUY
LOWEST PRICE
$129.95
SHOE INFO
Skechers
Brand
GOrun MaxRoad 4+ Hyper
Model
Cushioning
Type
7.7 oz. (218 gr.)
Weight
129.95 US$
MSRP
6 mm
Heel Drop
WHO IS IT FOR
If you're a runner who doesn't need much stability and you want a versatile, max-cushioned trainer, the MaxRoad 4+ is a great choice.
Help me choose

Skechers is no longer the affordable family footwear brand that conjures up images of the 90’s and Volvo driving soccer moms.

Skechers performance running shoes have been a force to be reckoned with for a while now and the change to Hyper Burst midsole foam has cemented Skechers’ place as one of the most innovative brands in running.

Hyper Burst is EVA that has been mechanically blown instead of chemically blown. Skechers heats carbon dioxide and nitrogen to penetrate the EVA which gives it its translucent bubble texture.

To me, Hyper Burst feels significantly more responsive and lively than the average midsole foam.

The MaxRoad is Skechers’ softest, neutral, max-cushioned trainer. The great thing about the max-cushioned category is that we are spoilt for choice which is why it’s my favourite category of running shoe.

The MaxRoad falls into the same category as the React Infinity Run. Its highly cushioned Hyper Burst midsole feels responsive and bouncy without any of the mushiness usually associated with soft midsoles.

Skechers also sells the MaxRoad 4+ for $140 which undercuts the other max-cushioned stalwarts (Nimbus, Glycerin & Triumph) by $10 which means you get more bang for your buck.

The MaxRoad 4+ is a minor update to the MaxRoad 4. It has the same midsole but gets a brand new upper and updated outsole.

Runners who ran in the MaxRoad 4 enjoyed the ride but they complained of the relaxed, warm upper. The high collar irritated and the loose fit resulted in sub-par foot lockdown.

Rather than making wholesale changes, Skechers decided to keep what worked well on the MaxRoad 4 and to change what didn’t. It has also lost 0.7 oz compared to last year’s version which is a big improvement.

So how does the updated MaxRoad 4+ perform and how does it stack up to the other heavyweights in the max-cushioned category?

I really like the mature look of the MaxRoad 4+. There is minimal branding except for an “S” on the heel and its name on the tongue.

Gone are the days of having “SPEED” or “Skechers” in large fonts on the sides of their performance shoes.

From past experiences with Skechers trainers, I knew that sizing runs large so when I tried the MaxRoad 4+ in the store, I asked for a half size smaller than my usual size.

There was just the right amount of space in front of my toes and I don’t like too much extra space because then if I take the insole out, there’s too much space.

A great feature of the MaxRoad 4+ and many of the other Skechers performance trainers is that you have the option of running with the insole or without it- it’s like 2 shoes in 1.

The fit of the new upper felt 1000 times better than the upper of the MaxRoad 4. It felt more secure and more performance-oriented than the lifestyle, knitted upper of its predecessor.

My first run in the MaxRoad 4+ was a 14 kilometre run in the rain. The grip was amazing and I never felt like I was going to slip.

It was at an easy pace but the midsole felt a lot more versatile than I expected it to feel. I felt like I could pick up the pace if I wanted to and I was really excited to get more kilometres in the shoe.

My second run was a 33 kilometre weekend run and they felt amazing. They were similar to the New Balance RC Elite in that the midsole felt fatigue resistant and at the end of my run, my legs still felt fresh.

It was only later that day that I felt that something wasn’t right with my right ankle. The lateral base of my ankle felt really stiff which is something that I’ve never felt before.

The next day, the stiffness turned to pain I couldn’t run. It took two days for the pain to subside and after that, I kept runs in the MaxRoad 4+ below 10 kilometres but the pain never fully went away during my time of testing them.

With such a soft midsole, stability is sacrificed. There is plenty of lean bias which would explain my sore ankle after the long run in them.

Of all the max-cushioned trainers, the MaxRoad 4+ is the least stable because its midsole doesn’t flare out at the base.

Due to its super light weight, the MaxRoad 4+ is incredibly versatile. I was able to do recovery runs, easy runs, marathon pace and even tempo runs in them when I removed the insole.

With the insole in, I feel that the MaxRoad 4+ is best suited to long runs or daily training runs at relaxed paces.

With the insole removed, the MaxRoad 4+’s ride character changes and it becomes suitable for faster, shorter runs when you can open the throttle.

My favourite feature is the M-Strike midsole which is Skechers’ version of the Meta-Rocker from Hoka.

The midsole is kind of shaped like a boat and makes me strike more towards the midfoot of the shoe. The rearfoot is also heavily beveled which makes it almost impossible to heel strike.

Flexibility of the MaxRoad 4 is high. There are 6 deep grooves cut into the outsole which allow the shoe to easily flex in the forefoot.

The high degree of flexibility is another factor that makes the MaxRoad 4+ more suited to relaxed runs.

There are 14 pillars or pods which make up the outsole. When you strike the ground, these pillars compress and spring back like pistons which results in a fun, trampoline-like ride.

I feel a similar effect when I run in the Asics Novablast but in the MaxRoad 4+, the trampoline effect is stronger and more springy.

Goodyear rubber is the new addition to the outsole of the MaxRoad 4+ and while the actual rubber is very durable, only the tips of the pillars are covered in rubber.

The Goodyear rubber provides excellent traction on the surfaces I tested them on (grass, pavement and tar) in both wet and dry conditions.

Durability is on the lower end. The outsole shows significant signs of wear already and the toe cap is coming loose. There are small details on Skechers trainers that make them feel like they have bad build quality.

The first pair that I bought had the name on the tongue smudged so I had to exchange them for a different pair and the display pair in the store looked like it was from a rejects batch with paint chipped off the toe cap.

The MaxRoad 4+’s upper is not what I’d describe as plush. Compared to the other giants in the category like the Nimbus, Triumph and Glycerin, the MaxRoad’s upper is free from thick, luxurious padding in order to save weight.

It’s a huge improvement over the MaxRoad 4 but you should know that in order to achieve such a feather light weight for a max-cushioned trainer, Skechers had to make some choices which affect long-distance comfort.

The tongue is a flat, short, racing-inspired tongue which doesn’t make sense for a long distance trainer. It has minimal padding and digs into my ankles if I don’t wear long enough socks.

I’ll never understand why brands give non-tempo trainers short, flat tongues. It is also not gusseted so it slides both downwards and laterally.

On the positive side, the new upper results in superb foot lockdown and double last row eyelets give you the option of using heel lock lacing so my heel never experienced any slippage.

The new Mono Mesh is soft to the touch and doesn’t stretch at all. Breathability is average but it’s much cooler than the knitted upper of the MaxRoad 4.

The heel pull tab is reflective which is a useful addition to the 4+.

For me, it runs a half size large but even taking a half size smaller than my usual size, there is plenty of toe box and midfoot room.

The MaxRoad 4+ is not a terrible shoe but it just didn’t work for my form and footstrike. It didn’t have enough stability particularly on the lateral sides which caused me issues.

Skechers is definitely going in the right direction with the 4+. It is a vast improvement over the MaxRoad 4 with a much better upper that has improved lockdown and they even managed to shave 0.7 oz off of it.

The MaxRoad 4+ delivers on its promise of being a highly cushioned trainer with long-distance comfort while its Hyper Burst midsole shines as a soft but bouncy midsole foam that doesn’t bottom out.

For a shoe with such a thick midsole, The MaxRoad 4+ is also very versatile.

When it comes to max-cushioned trainers, I like a soft, plush ride but I need a bit more stability in my life which is why the Triumph is still the king in my opinion.

The Triumph has a lively ride that equals the MaxRoad 4+ but with more stability: it is a much heavier shoe though.

Hopefully Skechers can make the MaxRoad 5 more stable by adding raised lateral rails or improving the geometry of the shoe without sacrificing cushioning.

We purchased a pair of Skechers GOrun MaxRoad 4+ Hyper from runningwarehouse using our own money. This did not influence the outcome of this review, written after running more than 50 miles in them.