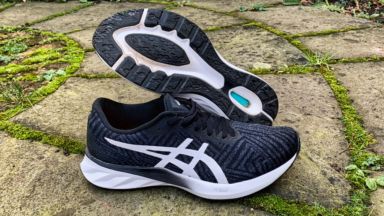 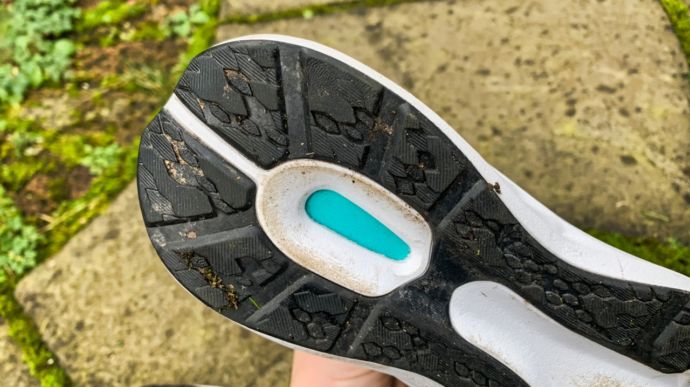 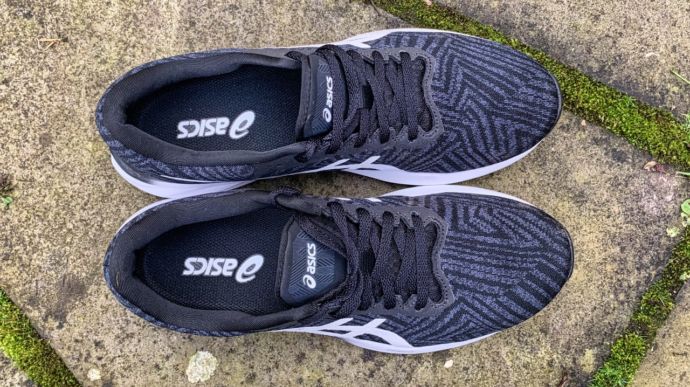 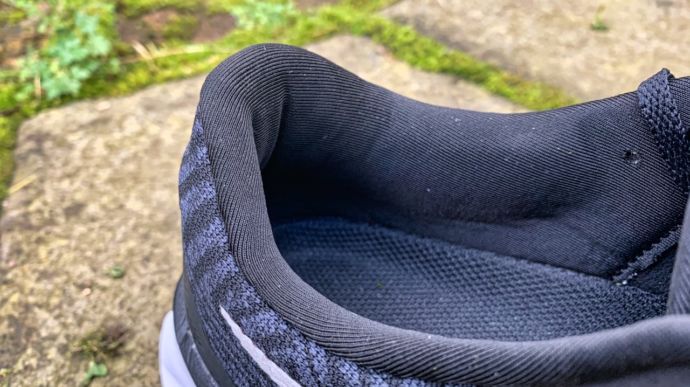 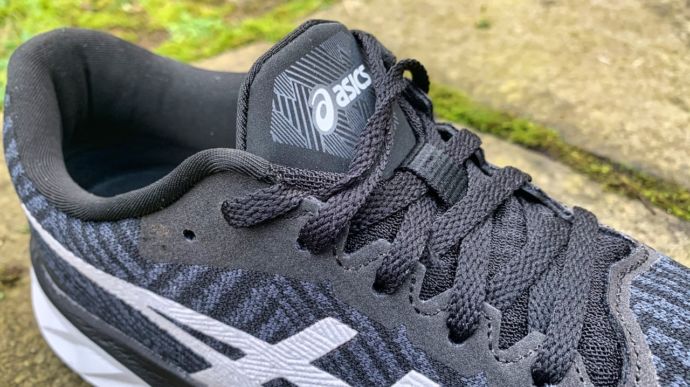 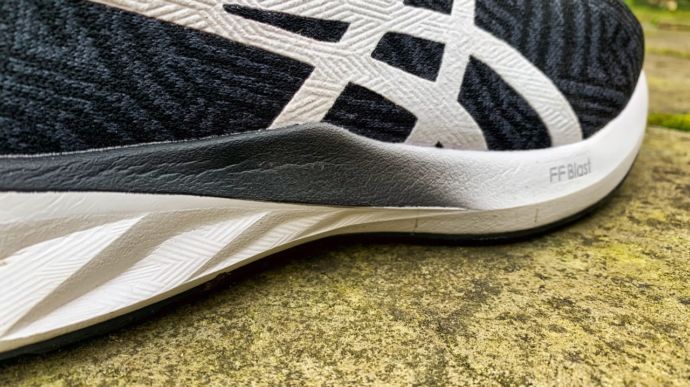 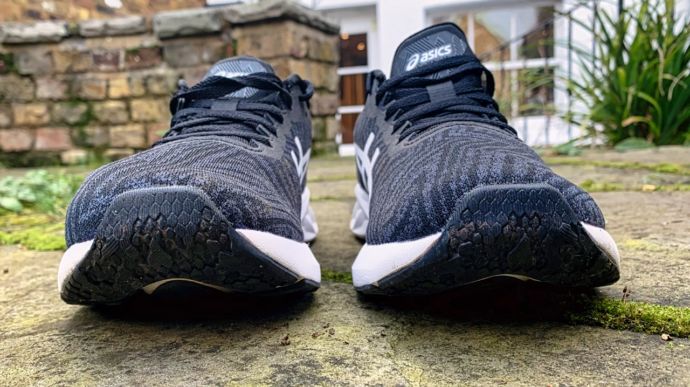 The Roadblast is a superb and lightweight new running shoe from Asics. Responsive Flytefoam in the midsole, and a comfortable gender specific upper keep feet airy and fast on short to mid distance runs.
WHERE TO BUY
LOWEST PRICE
$41
SHOE INFO
Asics
Brand
Roadblast
Model
Cushioning
Type
8.7 oz. (247 gr.)
Weight
90 US$
MSRP
10 mm
Heel Drop
WHO IS IT FOR
The Asics Roadblast is for beginner or intermediate runners, looking for a lightweight fast shoe for training runs and racing up to 10 miles.

To top this off, the Roadblast comes in at a great value price for a new shoe.
Help me choose

Asics were my first choice of running shoe when I took up running at university many years ago due to their long-trusted heritage of being top performing, specialist running shoes.

This first pair lasted me a good couple of years throughout a sporadic running career, before I switched over to Nike’s more cushioned (and slightly more modern?!) offerings.

Most recently the Nike React Miler and Winflo 7, before testing the Roadblasts simultaneously with the Nike Renew Run 2.

Whilst some other brands are moving away from classifying shoes as either ‘neutral’ or ‘stable’, Asics still use and list their shoes under these headings, with the Roadblasts being aimed at neutral runners.

The Roadblast sits at the budget end of Asics’ Blast range behind the Novablast and Dynablast and around $20 more than the Versablast, but this isn’t a particularly low priced shoe.

The Roadblast is designed to deliver responsive bounce, lasting comfort and enable you to beat your best time, according to Asics. So does it do what it says on the tin? On the whole I think it does, and here’s why….

The first thing I noticed about the Roadblasts when taking them out of the box is how light the shoe is, coming in at 7.4oz.

This is down to a super-thin upper and new lightweight midsole foam, both of which appear premium and well made.

Having not run in the Novablast’s it’s tricky to compare to its more premium cousin, but the Roadblast comes in slightly lighter, down to less midsole foam

The fit is somewhat on the small side (I tend to go half a size up in Asics vs other running shoes) which is exasperated by a narrow fitting low heel counter and narrow mid and forefoot.

The low heel counter rubbed the back of my heel when wearing the shoes around the house, so I put on a longer pair of socks for the first run which gave me no issues.

Since this, I’ve worn shorter socks on a run and had no problems, they just take a bit of adapting to if you’re used to a larger or higher heel counter.

The thin upper means the toes move around freely, and can even get a nice breeze on a run, but the shoe does feel slightly narrow.

The fit is also low on the top of the foot which takes some getting used to, and you can see low socks underneath the shoe however far you push them down.

Aesthetically the Roadblast’s look super sleek too and much better in real life than the pictures do justice, and probably one of my favorite Asics models recently looks-wise.

Straight out of the box I took the Roadblast’s for a 10km run mixing in concrete and gravel canal paths in freezing January UK temperatures.

The first thing to note was the breathability of the upper- my feet were cold straight away, which I’d normally welcome so not a negative here, just a reminder to wear thicker socks in such cold weather!

The next standout point was the cushioning under the heel. The heel strike felt cushioned yet responsive, much more than I’d expected after previous Asics shoes, and a welcome surprise.

The only area this shoe lacks is the cushioning under the forefoot, perhaps exaggerated by the 10mm heel-toe drop. I could definitely notice the changes in surface underfoot when running in the Roadblasts.

Compared to my other shoes with more foam, I could feel more of the small stones and uneven surfaces that I was contending with.

Great if a good ground contact feel is important to you when it comes to running shoes, but for me definitely a shoe suited more to flat roads and treadmills than off-road.

And my reviews of training shoes (Nike Metcon 6 and Reebok Nano X- not designed for long-distance running but tested them against this all the same) the Roadblast sits in the middle.

It is of course designed to give cushioning on a run, but the low amount of forefoot foam gave a much better ground contact feel, and firm responsiveness.

The sole extends well past the extremities of the shoe, especially towards the back, which adds in some stability, especially for heel strikers. This combined with the lower sole stack height also reduces the risk of ankle roll.

The midsole is flytefoam, designed to be a whopping 55% lighter than industry standard foam, yet durable and resilient to spring back to shape.

After 50 miles I agree with this claim and the foam feels box fresh. In the Roadblast this is combined with Amplifoam, a slightly older technology which serves the purpose and keeps the cost down in this shoe.

Deep decoupled grooves on the outsole expose the Amplifoam foam underneath the high abrasion-resistant rubber.

On a wetter day and on a muddy, gravelly run picked up lots of stones and path debris, making the shoe heavier by the time I’d arrived home.

The pattern design and grooves do the job well with adequate grip to prevent slipping and sliding.

Overall the sole unit has a lower stack height than many of the newer shoe models being released giving slightly less bounce and cushion, but this is working in favor of the Roadblast to give good ground feel and keep weight low.

A unique thing to note about the Roadblast is the ‘gender specific’ upper, with the women’s claiming to be more textured for an excellent fit and improved breathability.

Visually the two ‘genders’ differ too, with the women’s having an almost animal style print, vs a plain men’s shoe. Having only tested the women’s I can confirm the fit and breathability are great as claimed.

Both versions had a stretchy weave knit material that comfortably encases the foot. On the wetter muddier runs, the knit started to feel heavy and took a while to dry, making this much more a summer shoe, and one I’d avoid in wet weather.

Simple eyelet overlays kept the traditonal laces in place well, and the light tongue padding made the shoe comfortable over the whole foot.

Due to the low rise on the top of the foot, there was abit of heel slipping to begin with, and unless you’re wearing longer socks, socks slip down easily under the heel.

After a few runs, I could notice the shoe feeling looser around the top of the foot, but not in a detrimental way.

Overall the Roadblasts offer a fantastic compromise between a comfortable and light, fast shoe.

The low stack height gives stability to a neutral shoe, and if you don’t need lots of structure the Roadblasts can work for short to mid distances comfortably

They feel adequately responsive, bouncy and supportive, and are a great shoe outside of running too.

In short, these shoes are ideal for a fast run up to 10 miles, in warm dry weather on a flat road surface. In these conditions you may well beat your personal best time, as promised, in the Roadblasts.

These will be my go-to shoe in Spring 2021 for such runs and have reminded me why I loved Asics in the first place.

We purchased a pair of Asics Roadblast from runningwarehouse using our own money. This did not influence the outcome of this review, written after running more than 50 miles in them.

Visit ShopAmazon.com
This page contains affiliate links. As an Amazon Associate I earn from qualifying purchases.
WHERE TO BUY
LOWEST PRICE
$41