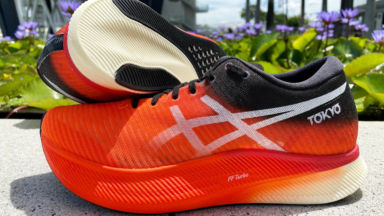 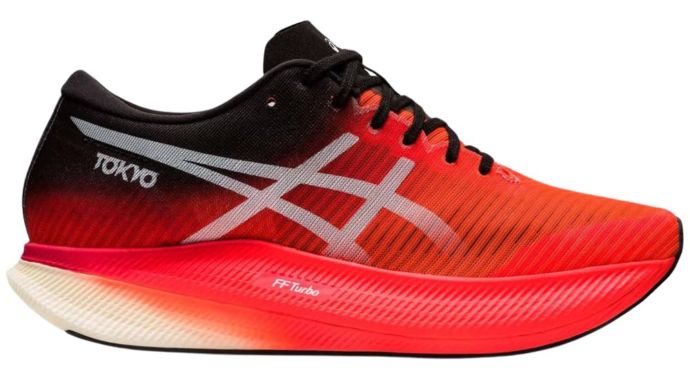 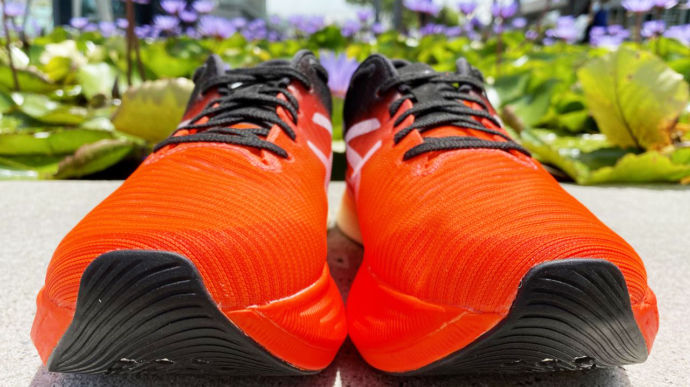 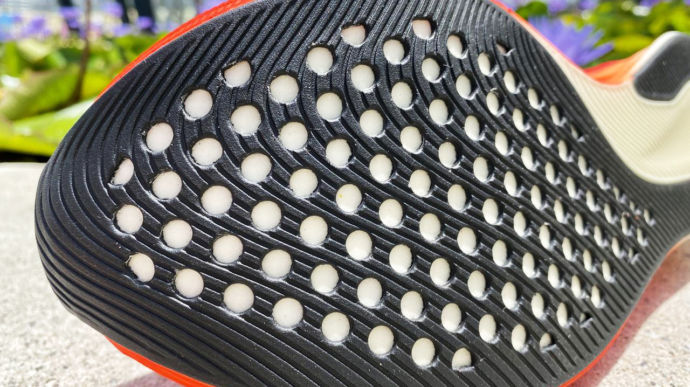 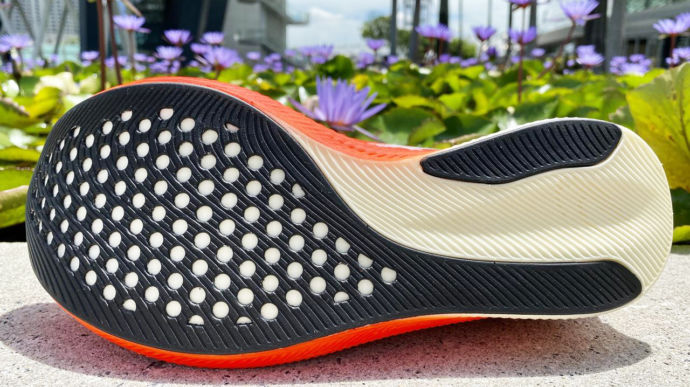 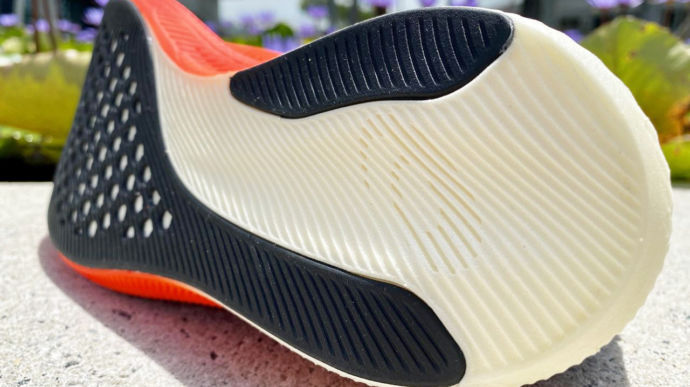 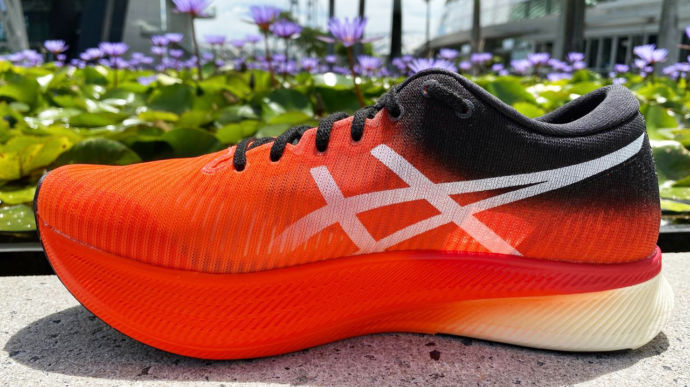 The Asics Metaspeed Sky is a rocket. Its stiff carbon plate combined with its high toe-spring rocker results in one of the fastest-feeling super shoes that money can buy.
Flytefoam Blast Turbo foam makes its debut in the Metaspeed Sky and it provides excellent energy return and long-distance cushioning in a lightweight form.
WHERE TO BUY
LOWEST PRICE
$119
SHOE INFO
Asics
Brand
Metaspeed Sky
Model
Racing
Type
7.3 oz. (207 gr.)
Weight
250 US$
MSRP
5 mm
Heel Drop
WHO IS IT FOR
If you're a runner looking for a top-of-the-range racing shoe with a propulsive ride and an accommodating fit, the Metaspeed Sky is a brilliant option.

The Metaspeed Sky is more stable than most carbon fibre shoes but its durability is slightly lower.
Help me choose

The Metaspeed Sky feels like a super shoe. Asics has finally delivered on a carbon-plated, highly cushioned, marathon racer. They might be 3 years late to the party but better late than never, right?

The 2020 Metaracer was a good shoe for short distances but it certainly wasn’t suitable for the full marathon. Some would argue that it didn’t possess enough cushioning for even the half-marathon distance.

I ended up using my Metaracers for mostly short, interval speed workouts. It felt more like a cushioned racing flat than a marathon super shoe.

Asics has thrown everything but the kitchen sink into the Metaspeed Sky. It has a full-length carbon plate, a highly breathable upper and it features their brand new, nylon-based midsole super foam, Flytefoam Blast Turbo.

It measures 33mm in the heel and 28mm in the forefoot for the men’s version and weighs a minuscule 7.3 oz for a men’s US 9.

The Metaspeed Sky is part of a trio of new Asics racing shoes.

Asics reserves the naming prefix “Meta” for only their top of the range, premium shoes: the MetaRide, the Metaracer and now the Metaspeed.

The Metaspeed Sky is the most advanced, expensive and hyped up shoe they have ever released.

The Asics elite athletes had been racing in prototypes of the Metaspeed Sky for months before the official release so when Asics announced their new super shoe on social media, it wasn’t a big surprise.

The real surprise was how rare and how expensive the shoe was set to be upon launch.

The Metaspeed Sky is an extremely rare shoe. There were only 56 pairs made available to the public in the whole of Singapore so I made sure that I was at the flagship store when it opened on launch day.

My first run in the Metaspeed Sky was a 10-kilometre tempo run and I was really impressed with its performance. Transitions felt really smooth and it was easy to get used to the shoe.

I found it easy to pick up the pace because the carbon plate inside the midsole was so prominent and it had a spring-board type of forward propulsion.

The shoe also sounded really loud when striking the ground- almost as loud as the Nike Tempo Next% and runners could hear me coming from far away.

That 10K was one of my fastest ever and I couldn’t wait to test it over longer distances.

The 2 main features of the Metaspeed Sky which make it feel like a super shoe compared to the Metaracer which doesn’t feel like one are:

1) The new Flytefoam Blast Turbo foam: it is extremely light but still cushioned so the stack height can be increased while maintaining a low weight.

2) The carbon plate: it is now full-length, stiffer and is curved in such a way that it propels you forward.

Flytefoam Blast Turbo is a true competitor to ZoomX and it’s the closest foam to ZoomX currently on the market: it has the same airy, lightweight, cushioned and springy feel to it but is slightly softer to the touch.

With the stack heights of just 33mm in the heel and 28mm in the forefoot, the Metaspeed Sky still packs plenty of deep cushioning for the full marathon distance.

33mm is relatively low for a marathon racer but the midsole feels a lot thicker and very substantial underfoot.

After the 40-kilometre long run test, my legs felt fresh as daisies however my calves were a little tight the days following the run because of the rigid carbon plate and the 5mm drop.

The Metaspeed Sky is built to go fast and it’s the most fun at tempo paces below 4.30 per kilometre. When I lean forward and engage the rocker, the plate works in tandem to give me an extra boost forward.

It also feels comfortable at slower paces because of how soft the heel is and how stable it is. This is one very versatile super shoe.

It’s suitable for all distances from 5km right up to beyond marathon because of how light and how cushioned it is.

The carbon plate inside the midsole of the Metaspeed Sky is very stiff and rigid with zero flexibility. It has an upward curve which you can distinctly feel directly under your toes.

The plate is similar to the Vaporfly Next% in that it acts as a lever. When you load the heel, the front of the plate is anchored and it launches you forward.

I found that the level of propulsion was equal to that of the Vaporfly Next%.

Stability when running in the Metaspeed Sky is good because of how wide the platform is, especially the forefoot.

The shoe doesn’t have a slim waist, so there’s no prominent arch sensation like in other racing shoes such as the Vaporfly and the Alphafly.

I found that even when I was tired and I was heel striking, the shoe felt stable and foot strikes felt planted. This is a shoe designed for both elite and non-elite runners who have less than perfect form.

The super thin insole of the Metaspeed Sky is glued down to the lasting to prevent any slippage during races. It doesn’t provide much cushioning and most of the softness comes from the midsole foam.

The outsole uses ASICSGRIP which is a very soft, flexible type of rubber that feels really tacky on all types of surfaces. I used the Metaspeed Sky once, after it had rained and traction was still excellent.

The entire forefoot is covered with rubber and it has small circles punched into it to save weight and increase traction.

The forefoot rubber piece extends to the rear of the shoe on the lateral side and there is a separate small piece of rubber to protect the medial side of the rearfoot.

The outsole rubber provides good protection for the soft foam however the strip on the rearfoot doesn’t extend back far enough so there’s a portion on the outer lateral side that shows accelerated wear.

Just like ZoomX, Flytefoam Blast Turbo is also very brittle. The foam has a thin layer of skin that peels away first and that exposes the fluffy foam underneath.

This is the one weakness of the Metaspeed Sky: not all of the foam in the heel is protected.

After just 80 kilometres, there’s a shallow crater on the lateral heel area of my right shoe where the foam has worn. This is a shoe that you’ll want to reserve for race days only.

The upper of the Metaspeed Sky is the roomiest and most accommodating of all the super shoes. There’s so much space in the midfoot and forefoot that I would suggest going down a half size if you prefer a snug, racing fit.

I think this move by Asics to make the fit so roomy is a smart one, because it allows wide-footed runners to be able to run in the shoe too, since racing super shoes don’t come in additional wide versions.

I found that the Metaspeed Sky fits me best when I wear it with thick socks which eliminates the excess space in the midfoot and forefoot.

The upper mesh is rough to the touch and extremely porous which makes it really effective at letting the air in to cool down your feet.

The tongue is flat and not gusseted. I found it to be too short because during runs, the tongue slides downwards and the top lacing row rests against the top of my foot which is not uncomfortable but just annoying.

The heel tab and collar are lightly padded and foot lockdown is very secure. There is a thin, flexible, internal heel counter reinforcement that is perforated to allow air through it.

I really didn’t like the laces because they are too soft and they started to fray after just two runs. The laces feel cheap and not deserving of being on a $250 shoe.

Overall, I found the Metaspeed Sky upper to be one of the most comfortable super shoe, racing uppers and it gives me no problems when I wear it on runs lasting over 4 hours.

This is one very impressive super shoe. It can hold its own against the best racing shoes on the market and once it becomes widely available, I can see a lot of runners opting for the Metaspeed Sky over the default Vaporfly Next% because of the wider, more stable platform and the more accommodating upper.

My only criticisms are that the laces feel cheap and the 5mm drop leaves my calves feeling tighter than racers with an 8-10mm drop.

There is also a lot of exposed, soft foam on the heel of the shoe so I don’t expect durability to be great.

So would I wear this for a marathon? I’d definitely pick the Metaspeed Sky over the RC Elite, Rocket X and Carbon X 2 because its carbon plate is much more propulsive.

I’d also choose the Metaspeed Sky over the Alphafly and Vaporfly Next% because it doesn’t have an uncomfortable digging-in arch sensation due to its wider midfoot.

It does however have a higher heel to toe offset which doesn’t cause my calves to get stiff like the Metaspeed.

At $250, the Metaspeed Sky is one of the more expensive racers but you definitely get your money’s worth.

With the Metaspeed Sky, Asics finally has a lethal weapon in the carbon fibre super shoe war.

We purchased a pair of Asics Metaspeed Sky from runningwarehouse using our own money. This did not influence the outcome of this review, written after running more than 50 miles in them.