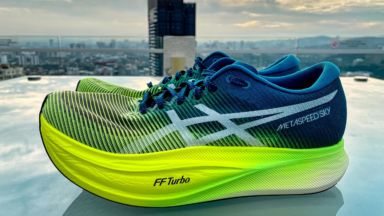 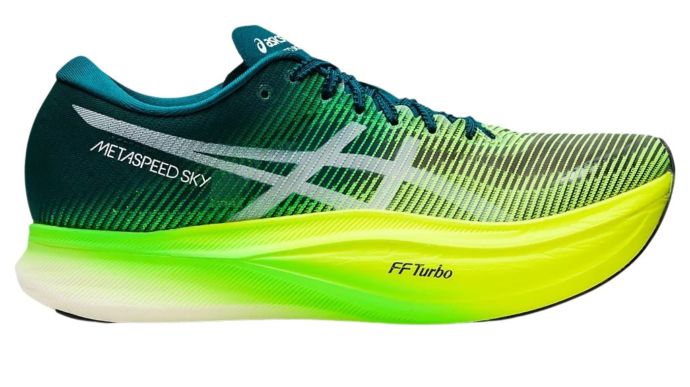 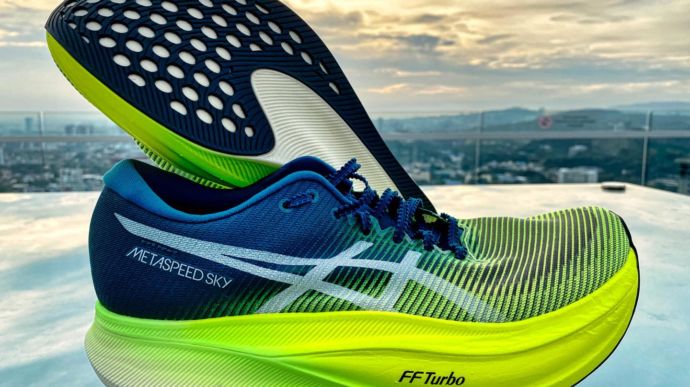 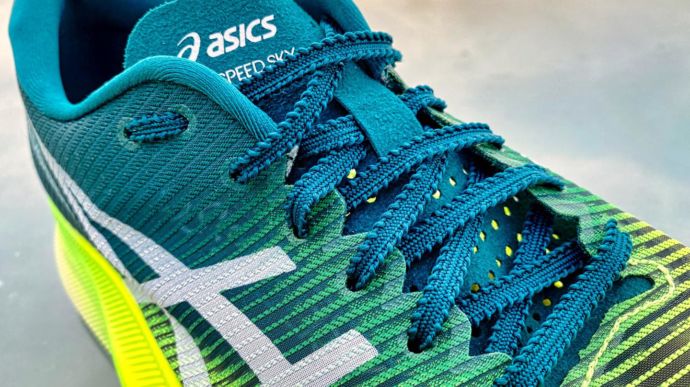 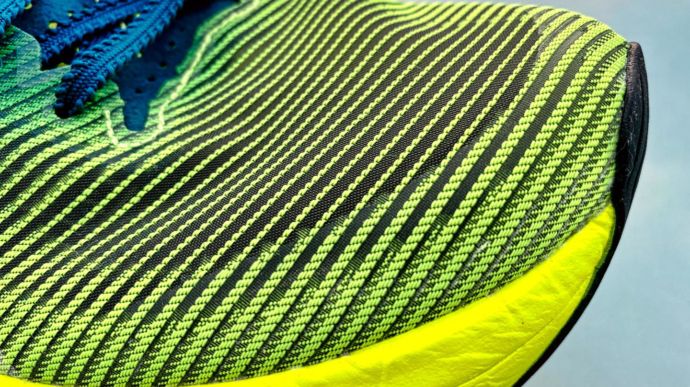 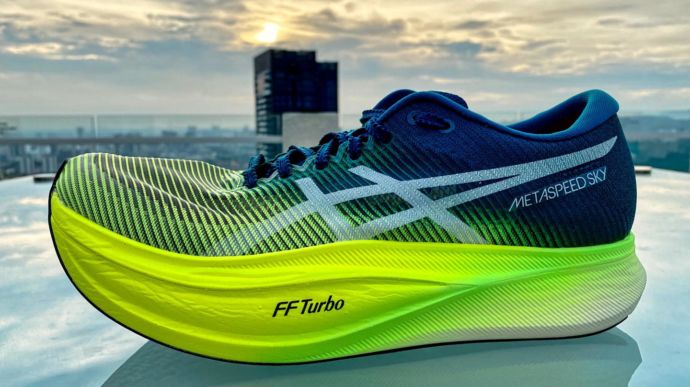 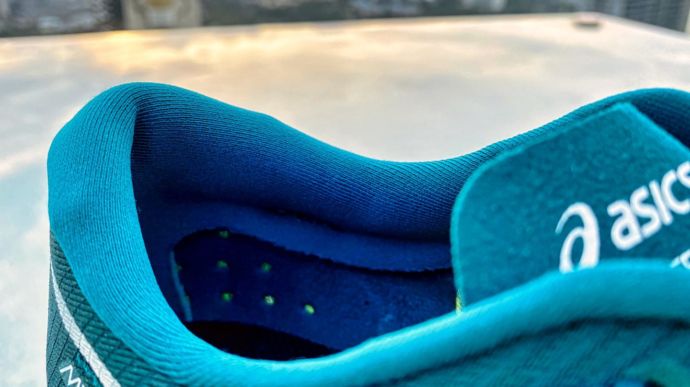 The ASICS Metaspeed Sky+ is still one of the top-tier marathon racers. It has a great combination of propulsion, cushioning, efficiency and stability. The Sky+ has more midsole foam, especially in the forefoot which increases the cushioning but it has a flatter carbon plate profile which makes it feel slower. The Sky+ is better for long distances at slower paces compared to the original Sky which provided more propulsion.
WHERE TO BUY
LOWEST PRICE
$249
SHOE INFO
Asics
Brand
Metaspeed Sky+
Model
Racing
Type
7.20 oz. (204 gr.)
Weight
250.00 US$
MSRP
39 mm
Heel
34 mm
Toe
5 mm
Heel Drop
Metaspeed Sky
Previous model
WHO IS IT FOR
If you’re looking for a top-of-the-range racing shoe which is highly cushioned, propulsive, and more stable than the Vaporfly, the Metaspeed Sky+ is an excellent choice. The Sky+ can handle slower paces because of its wider base while it has phenomenal upper comfort and enough cushioning for long-distance races.
Help me choose

It wasn’t that long ago that ASICS was slapping almost the same upper on the sole of the Nimbus 19 and calling it the Nimbus 20.

The Metaspeed Sky series is ASICS’ premium, flagship marathon racing shoe. Since it was launched last year, it’s been my favourite long-distance super shoe and it even helped me to achieve a half marathon PB earlier this year with an average pace of 4:04 minutes per km (6:30 per mile).

The way I see it, the Metaspeed Sky has a combination of the best elements of the top-tier racing shoes. It has the powerful, spring-board effect of the Vaporfly Next% 2, the efficient, rocker geometry of the Adios Pro 2 as well as the stability and bounce of the Alphafly Next%.

The Metaspeed Sky+ has been supercharged with even more FF Turbo foam this year. It also has a wider midsole base and an altered upper. This all comes in a 6 g (0.2 oz) heavier package than the original Metaspeed Sky.

It seems like lime green is the “in” colour for racing shoes this year with the Adios Pro 3 and the Metaspeed Sky+ both launching in lime green.
I’m a fan of this Metaspeed Sky+’s Velvet Pine & Safety Yellow launch colourway. It reminds me of the Green Lantern but it stands out and it looks fast. It’s miles better than the Tokyo Sunrise launch colour of the original Metaspeeds last year.

When I held the Sky+ in my hands for the first time, it felt more forefoot heavy than the previous version which felt more evenly balanced. The Sky+ also felt bigger, more clunky and not as aerodynamic as the Sky due to the foam in the forefoot which bulges out.

When I walked around in the Sky+ for the first time, it felt very different to the previous version. The new, higher toe-spring made me feel like I was wearing elf shoes with my toes pointing skywards while the softer upper felt much more comfortable.

My first run was a speed workout consisting of 500 m repeats which ranged from 3:30 per km (5:18 per mile) up to 4.30 per km (6:55 per mile). The most noticeable thing was that the carbon plate didn’t feel as springy or aggressive as last year’s version and the forefoot felt a lot more cushioned. It felt as though the carbon plate was buried under more foam.

It also felt more stable than the original Sky due to the wider midsole base. The upper felt amazing and disappeared on foot. Even though the ride didn’t feel as fast as the original version, it felt more cushioned and more comfortable.

The front of the carbon plate in the Metaspeed Sky+ has been moved upwards in the midsole, closer to the foot and it’s now a much flatter profile than version 1.

Version 1 had a carbon plate which dipped down sharply at the forefoot, similar to the setup in the Vaporfly Next% 2. This allowed the front of the plate to be anchored by the ground, so when the heel was loaded, it would shoot you forward like a springboard.

The Metaspeed Sky+’s forward propulsion now comes from the forefoot rocker geometry combined with the stiffness of the midsole, so it’s more similar to the Adios Pro 2/Alphafly than it is to the Vaporfly Next% 2.

Version 1 felt faster because of the aggressive setup of the plate. In the Metaspeed Sky+, I feel like I need to work harder to increase my pace because it doesn’t give me as much mechanical assistance.

The Metaspeed Sky+ is a tamer beast compared to the original: less speed, but more cushioning and control which makes it a better long-distance cruiser. I’ve run all types of paces in the Metaspeed Sky: at slow paces above 5.30 minutes per km (8.51 minutes/mile), the ride feels unnatural because of the stiff plate combined with the high toe-spring so you have to be going below 5.30 per km in order to really feel a benefit.

At uptempo paces between 4 mins per km (6:26 per mile) and 5 mins per km (8:02 per mile) is where the Sky+ performs the best for me, where it feels most comfortable. During speed workouts and intervals below 4 minutes per km (6:26 per mile), I don’t feel enough propulsion coming from the midsole foam and plate setup so I find it hard to maintain fast paces. For my marathon and half marathon target paces, the Sky+ performs much better.

FF Turbo is a nylon-based foam and it feels almost exactly the same as PEBA (Poly-Ether-Block-Amide) based ZoomX in Nike’s racing shoes. I find FF Turbo to be a little firmer than ZoomX but it still offers exceptional energy return in a lightweight package.

One of my favourite things about the ride of the Metaspeed Sky+ is how smooth transitions feel. Its midsole doesn’t have any cutouts like the Adios Pro 2 does while its outsole is also full ground contact so stability is relatively good for a super shoe.

The outsole of the Metaspeed Sky+ is very similar to its predecessor’s. One of the differences is that the holes in the forefoot rubber are now bigger, allowing some weight loss. The rubber covering the forefoot also covers a smaller area than the original version.

Traction in the Metaspeed Sky+ is as good as it was in the first version. It grips well on wet surfaces because its outsole is so soft. The soft outsole also means that durability is not great.

If you’re a heel striker, you’ll notice a lot of wear on the outer lateral heel area which is not covered with rubber. My original Metaspeed Sky has a big hole on the outer heel area after 194 kilometres and I expect version 2 to be the same.

My least favourite thing about last year’s Metaspeed Sky was the shoelace. It felt furry, too soft and started fraying after a couple of runs. I’m glad to report that this year’s shoelace is a millions times better and it feels like it belongs on a $250 shoe.

It’s similar to the ribbed lace that you find on the Vaporfly Next% 2 and the Alphafly- it grips like a beast and it doesn’t come undone. The tongue of the Sky+ is still very thin and non-gusseted so you get some downward tongue movement during runs.

I had to go a half size down in last year’s version but the Sky+ feels less roomy and it fits me true to size. The toe box is higher but the width feels narrower. I’m afraid the Sky+ is another super shoe not suited to wide-footed runners.

The heel tab and collar have ample padding so heel lockdown is good. Overall, the Sky+’s upper is superior to the original version: it feels more polished and the fit has improved.

It might just seem like a minor update because of its looks and its name but the Metaspeed Sky+ performs completely differently to the Metaspeed Sky. The new plate location inside the midsole gives it a more subdued, reserved ride character so it doesn’t feel as propulsive or fast as the original version.

The Metaspeed Sky+ is a classic example of changing too much. The ASICS designers had to start designing the Sky+ before the first version had even launched so they designed it blindly, without any consumer feedback. I would have been happy with the midsole of the first version, an updated upper and some extra outsole rubber.

The Metaspeed Sky+ isn’t a worse shoe than the Sky but it’s very different. It has more cushioning under the forefoot which makes it a better long-distance racer for slower paces. Its wider platform also makes it more stable and the new upper is an improvement over version 1.

ASICS has managed to make the Sky+ more comfortable than the original but they’ve failed to make it faster or lighter than the Metaspeed Sky 1.

If you want a faster shoe with more powerful carbon plate positioning, get the original Metaspeed Sky but if you want extra cushioning in a more comfortable package, get the Sky+.

Given a choice, I’d pick the Metaspeed Sky+ over Hoka’s, New Balance’s and Puma’s racers but Nike and Adidas’ marathon racers feel faster than the Sky+. The Metaspeed Edge+ still has an aggressive carbon plate design but it comes with a lower stack height and less cushioning than the Sky+.

As editorial policy, we do not accept free samples from companies.
We purchased this pair of ASICS Metaspeed Sky+ at Running Warehouse with our own money.

Visit ShopRunningWarehouse.Com
This page contains affiliate links. As an Amazon Associate I earn from qualifying purchases.
WHERE TO BUY
LOWEST PRICE
$249
AVAILABLE ON SALE:Previous model $249