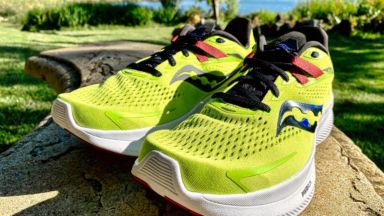 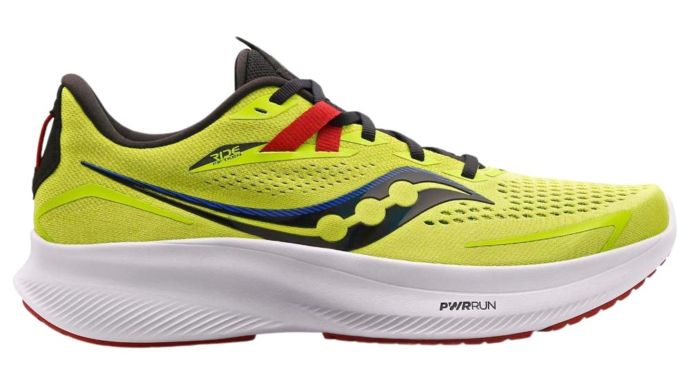 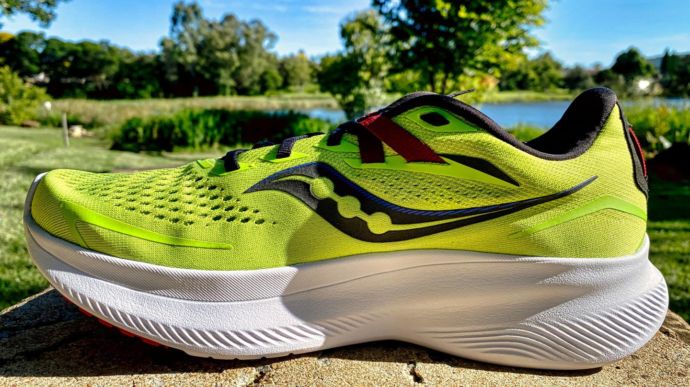 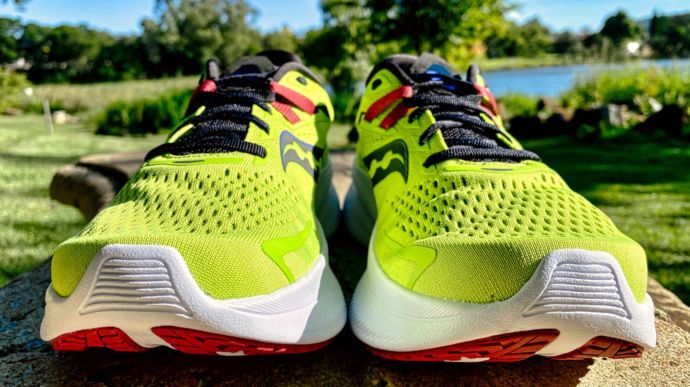 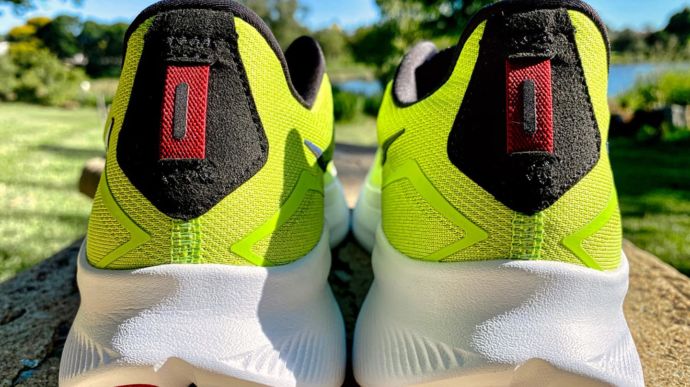 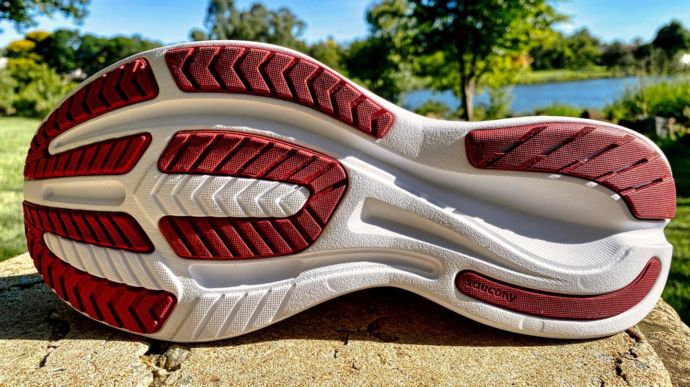 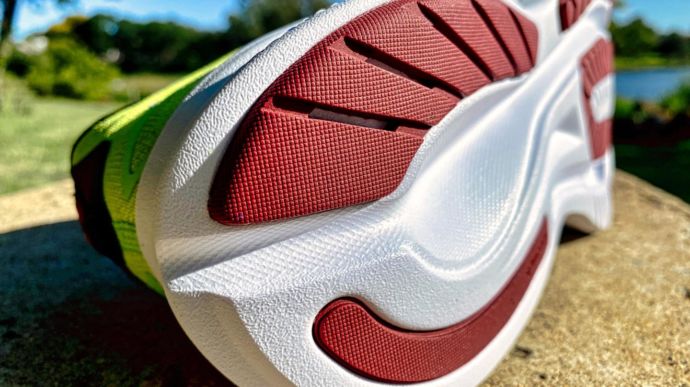 The Saucony Ride 15 is an excellent, well-rounded daily trainer with a very stable ride which is one of the lightest mid-range daily trainers. Version 15 is a big improvement over version 15: it's much lighter, much softer and has more cushioning thanks to its increased stack height.
WHERE TO BUY
LOWEST PRICE
$71
SHOE INFO
Saucony
Brand
Ride 15
Model
Cushioning
Type
8.70 oz. (247 gr.)
Weight
130.00 US$
MSRP
35 mm
Heel
27 mm
Toe
8 mm
Heel Drop
Saucony Ride
Family
WHO IS IT FOR
If you're looking for a versatile daily trainer with an incredibly balanced ride, the Ride 15 is the shoe for you. It has a highly flexible forefoot and super smooth ride transitions.
Help me choose

The Saucony Ride has always been one of the most consistent trainers from update to update. Each Ride had a very similar feel to its predecessor: versions had minor incremental changes and consistency was what the Ride was known for.

The Ride was cut from the same cloth as the Brooks Ghost and the Nike Pegasus. You always knew what you were going to get when buying it. This all changes with the Ride 15.

On paper, the new Saucony Ride 15 has all the ingredients to make it a successful update. Softer? Check. More cushioning? Check. Lighter? BIG check.

Saucony has clearly taken a big risk with the Ride 15 but this uncharacteristic “go big or go home” approach has paid off. The Ride 15 is the best version of the Ride to date.

Often, a brand makes many big changes and the shoe becomes unrecognizable. This is true of the Ride 15, but it’s a very good thing. The Ride 15 is more versatile, more comfortable, and more energetic than any previous Ride.

Ride 15 weighs more than an ounce less than the Ride 14, 1.3 ounces to be exact! I don’t ever remember a running shoe shedding this much weight from one version to the next.

The first time I saw leaked pictures of the Ride 15, I was extremely excited because it reminded me a lot of the Endorphin Shift 2, another excellent Saucony trainer from last year.

When I received the shoe and inspected it, the big surprise was that the PWRRUN+ topsole was gone and replaced with a thick, PWRRUN+ insole. This new insole made the shoe squeak when I walked around in it.

My first run was a 20 km long run at a steady 4.44 minutes per km pace. The Ride 15 was very impressive on that run. It didn’t need any break-in period, the fit was excellent and the ride felt well-balanced.

It felt a little bit like the Endorphin Shift 2 but a lot more dynamic because of the lighter weight. I felt like I could pick up the pace much easier. I even did some sprints at the end of the run below 3.30 pace and it didn’t feel sluggish at all.

Saucony markets the midsole of the Ride 15 as PWRRUN which is “technically” the same foam as the one in the Ride 13 and Ride 14 but they really should have named it something else because it feels vastly different.

It feels a lot squishier and has much more give than the older PWRRUN midsoles. It almost feels like Saucony gave it the “supercritical” treatment and infused tiny air bubbles into the foam because it feels more airy too which is where the massive weight reduction comes from.

Versatility is where the Ride 15 truly shines. The balance between soft and firm is exceptional and the Ride 15 felt great during every run. The increase in stack height makes it even more suitable for long runs while the increase in energy return makes it feel better on faster efforts.

The Ride 15 is the textbook daily trainer which can handle long runs above 15 km and the occasional shorter, faster run below 4.30 per km. It feels like an incredibly well-rounded shoe which can handle a number of roles in your shoe rotation.

The midsole of the Ride 15 looks a lot thicker than it actually is because it has raised side-walls that extend the entire length of the shoe, from the heel right up to the end of the forefoot.

This gives you the sense that your feet are sitting inside the midsole and not on top of it. Naturally, this leads to very stable ride transitions so the Ride 15 almost feels like a light stability trainer rather than a neutral one.

The thick PWRRUN+ insole provides a very squishy, pleasant step-in feel which is most noticeable when walking around in the shoe but when you pick up the pace, the initial squishiness disappears and what you get is a medium soft ride.

The Ride 15 feels softer than most of the popular daily trainers out there including the Pegasus 38, Ghost 14, Clifton 8. It also has a much more flexible forefoot so it feels more natural.

The outsole of the Ride 15 takes a page out of the Novablast’s book with its long, deep decoupled groove that extends from the heel, into the lateral side of the outsole. It saves a lot of weight and it makes the heel cushioning softer.

There are strategically placed rubber strips on both sides of the rearfoot as well as on the forefoot. There is a lot of exposed midsole foam on the outsole but it’s not a cause for concern because it’s relatively abrasion resistant.

I’ve been impressed with the durability. The rubber strips have held up very well after 80 kilometres of testing, particularly the one on the lateral heel. I found the grip to be excellent because of how much exposed, tacky midsole foam there is.

The Ride 15 upper can be summed up in 3 words: comfortable, secure and accommodating. Saucony hit this upper out of the park and it might be one of my favourite uppers.

It has a tongue which is lightly padded and sleeved so there’s no tongue movement during runs. The heel tab and collar are also lightly padded so ankle comfort is fantastic. An internal heel counter provides structure and support which makes heel lockdown excellent.

It has an engineered mesh which is both thin and breathable. There are plenty of holes punched into the top of the toe box so the upper feels light and breathable even though it has an inner sleeve.

The new additions to the Ride 15’s upper are straps that protrude from the lateral and medial sides of the midfoot (one on each side) to provide a more secure wrap around the foot. These new straps work like a charm and I have a feeling we’re going to see these on many future Ride versions.

The fit of the Ride 15 is true to size. The midfoot and forefoot are spacious and accommodating but the great thing is that even for very narrow feet like mine, I still feel locked-in and secure.

The Ride 15 has raised the bar and set the new standard for mid-range, neutral daily trainers. It has an exceptional upper, textbook daily trainer versatility and a high degree of stability.

I’m confident in my prediction that Saucony will sell more Ride 15’s than any previous version of the Ride. It’s softer, more comfortable, more cushioned, and also more lively than any of its predecessors.

Whether I was running really slowly, above 6 minutes per km, or sprinting below 3-minute pace, the Ride 15 impressed me. Right now, if I was going to an island and I could only bring one mid-range daily trainer with me, I’d choose the Ride 15.

The Ride 15’s sub 9-ounce weight combined with its lively ride makes it a truly special daily trainer. It has a modern feel which is fun and it has no major flaws

As editorial policy, we do not accept free samples from companies.
We purchased this pair of Saucony Ride 15 at Running Warehouse with our own money.

Visit ShopRunningWarehouse.Com
This page contains affiliate links. As an Amazon Associate I earn from qualifying purchases.
WHERE TO BUY
LOWEST PRICE
$71