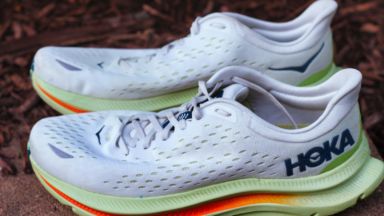 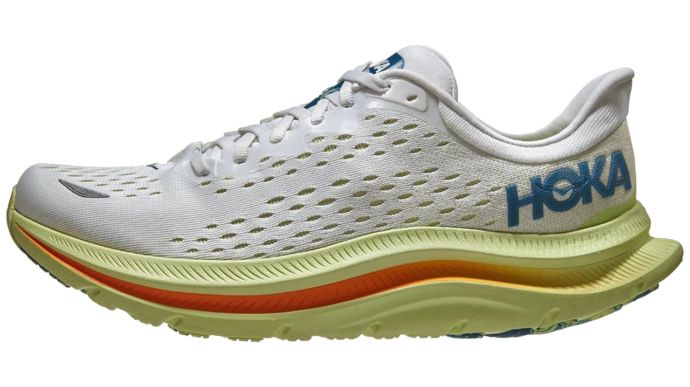 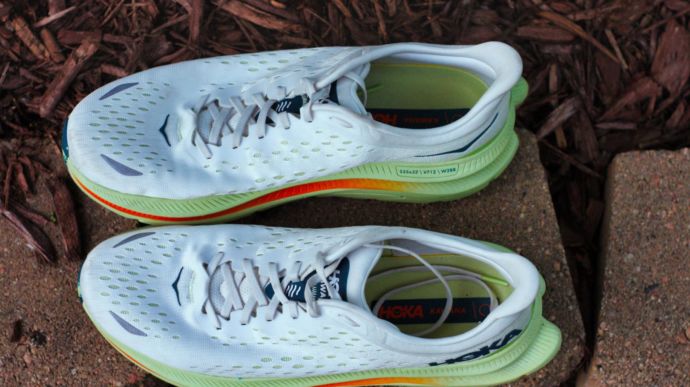 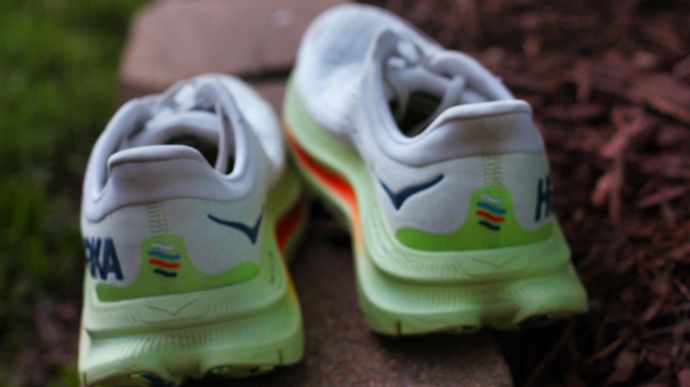 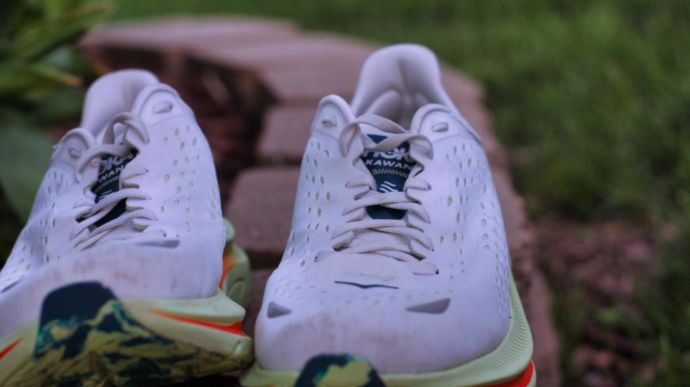 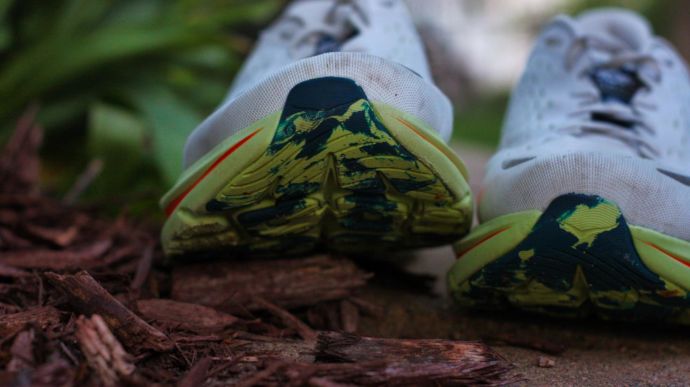 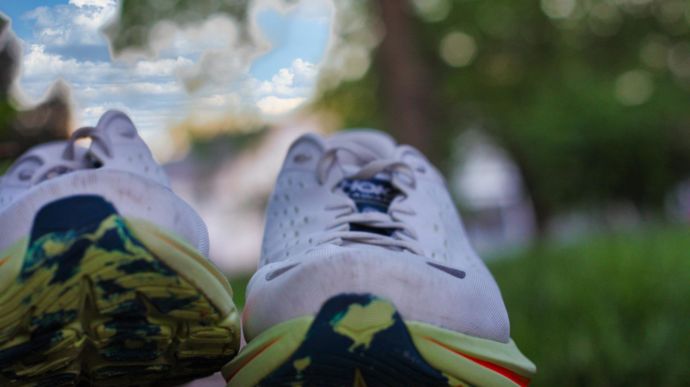 The Hoka One One Kawana is a versatile running and gym shoe that can help you do most any workout you have on tap. The cushioning can cover miles, while maintaining stability to feel comfortable with lateral movements and jumps.
WHERE TO BUY
LOWEST PRICE
$0
SHOE INFO
Hoka One One
Brand
Kawana
Model
Training
Type
10.00 oz. (283 gr.)
Weight
139.95 US$
MSRP
30 mm
Heel
25 mm
Toe
5 mm
Heel Drop
WHO IS IT FOR
This shoe is made for anyone who is looking for a max cushion gym trainer that can log miles or work in your HIIT workout. All sized people could benefit from this shoe.
Help me choose

Hoka One One have been around for quite a while and are well known for their maximal cushioning. However, they were missing out on a significant market with the lack of a running shoe that would have the traction and stability needed to be able to hit the gym for an HIIT workout as well as log those 5k and 10k distances.

In comes the Kawana. This shoe uses Hoka’s maximal cushioning design but with a wider base of cushion and more full rubber sections on the outsole to provide traction to allow for a multitude of uses.

Coming in at $140, this gym star will compete against many of the other WOD warriors such as the Metcon, No Bull offerings, or Reebok Nano, but can also compete as just a running shoe against offerings like the Brooks Ghost, New Balance 880, or Saucony Ride.

With the cushion it provides, it will outshine the WOD shoes on the run, and are more stable and versatile than the pure running shoes. But it will depend on your intended use of the shoe as to whether or not the Kawana is for you.

When the package arrived with these shoes, I was excited to see what Hoka could do when they created a versatile shoe. Upon opening the package, I found a beautiful pair of shoes. The colorway was bright, but well put together, and the shoe looked very attractive.

I was immediately motivated to get them on my feet. However, taking the out of the box I was struck by the weight. I had to check it out and put it on my scale, they came in at 14.2 ounces out of the box. That is remarkably heavy in today’s market.

When I put them on my feet, I found them to be a little stiff, but a nice amount of cushion without being “pillowy”. I took them on a 5k and thought they were solid. They weren’t amazing out of the box, but were decent. However, I knew they would be better after a break-in period.

The place where Hoka wins people over is in the sole units, and this one did not disappoint after it was broken in. Using a CMEVA foam, the cushioning was soft, but supportive. At no point was the cushioning overly soft, instead, it stayed supportive and responsive.

Hoka used their meta-rocker design to help propel you on your runs, but it is not as aggressive as some of their other offerings, while still offering the Swallow-Tail Heel Bevel for heel strikers and to optimize efficiency.

Although this shoe is made for multiple workouts, they did not skimp on the cushioning underfoot, stacking 35mm under the heel and 30mm under the forefoot (5mm drop). There is more than enough cushion for any workout, including the long run.

On the outsole, Hoka uses high-abrasion foam, as they do with most of their shoes. They also added a Hi-Abrasion Lightweight Rubber under the forefoot and heel to increase traction and durability. However, this thicker rubber also brings with it a much higher weight than the traditional Hoka shoe.

On the upper, Hoka uses an engineered jacquard mesh that is very well ventilated. The large openings allow a lot of air in for those indoor workouts. However, I also noticed it allowed a lot of water in when running in the rain or when the ground is wet. This mesh fits well, and is true to size in length, without much pressure or creating hot spots.

However, the forefoot does run on the tight side. My feet felt just a little cramped in the forefoot, but not to the point of creating blisters. With that said, if I had a wider foot, it wouldn’t have worked at all.

There were no overlays, but the structure of the mesh allowed for support in the midfoot, and I felt locked in for every time I wore the shoes, including while doing gym workouts.

The tongue of the upper is well padded, and comfortable, and never moved while I worked out, including jumping from side to side. This then worked its way into the heel, where Hoka has put together one of my favorite heels in a while.

The heel has a well structured cup that locks your foot in, including a great heel pull that you can use for easy on and off of the shoe. However, my favorite part is the anatomical Achilles. This feature on the heel cup supports the Achilles, cupping it but not pinching.

This means that whether my movement was forward or lateral, my heel and Achilles felt locked in.

I was very interested to see what the Hoka One One Kawana would be like as a shoe. How could Hoka offer their maximal cushioning and make it work for different gym workouts at the same time? These ideas do not seem to compute for me, as I find a high stack to be unstable in lateral movements. However, they did something here that I was not expecting.

Although the stack is high, it is designed in a way that feels low to the ground and has a wide base that gives confidence while moving laterally.

The rubber on the outsole does a great job on dry surfaces of giving all the grip you need. When wet, it can lose some of the grip, but that is to be expected from most shoes. At no point was it slippery for me while running (as I’ve seen other reviewers report on their use of the shoes).

When on the run, the shoe performs well. It is well cushioned, and I never felt like I hit a distance where the shoe couldn’t handle what I threw at it. I believe it was designed with 5k and 10k in mind, but can easily handle more than that. However, the issue I ran into when I started going longer is just the super high weight.

I’m spoiled, but I am used to shoes that come in at, or under, 10 oz for a size 13, and these came in at 14.2 oz. That’s almost an absurd weight for a running shoe, and my legs definitely felt it on the longer runs I used these on.

In the gym, these were great for all of the workouts I did. They performed well with box jumps, burpees, and general lifting weights. I was concerned with the stack height that squats, lunges, and deadlifts would be tough.

However, the wide base underfoot stabilized everything and they did remarkably well for the height. With that said, my personal preference for those leg lifts is to be able to feel the ground under me, and I don’t plan to continue using them for those workouts. However, it would work well for most of my weight room trips, and perhaps I just take them off and go in socks or barefoot for my squat/lunge/deadlift.

At the end of the day, this shoe is a great offering in its versatility.

The Kawanas are good, not great.

As editorial policy, we do not accept free samples from companies.
We purchased this pair of Hoka Kawana at Running Warehouse with our own money.

Hoka One One Kawana Price Comparison

Visit ShopRunningWarehouse.Com
This page contains affiliate links. As an Amazon Associate I earn from qualifying purchases.
WHERE TO BUY
LOWEST PRICE
$0

Similar shoes to Hoka One One Kawana