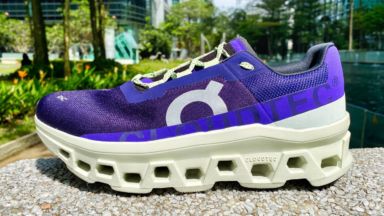 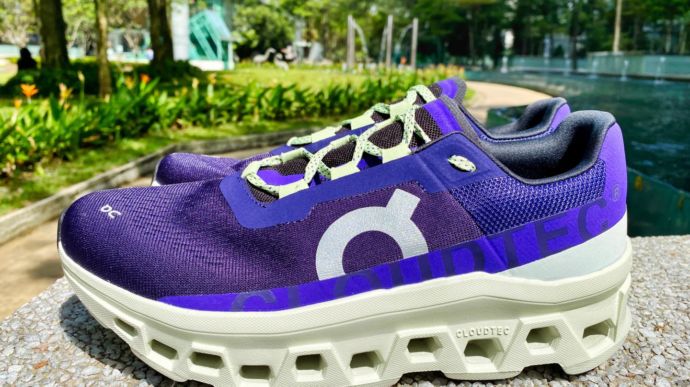 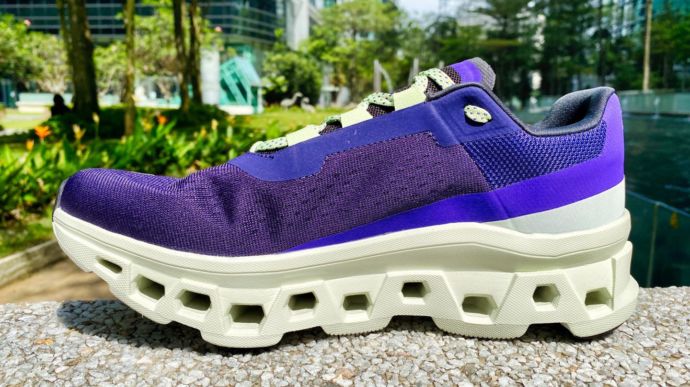 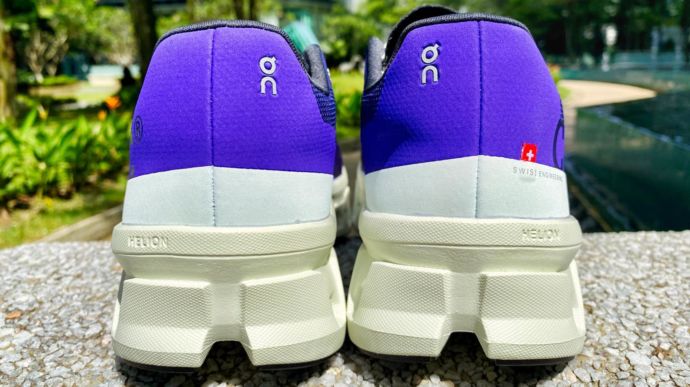 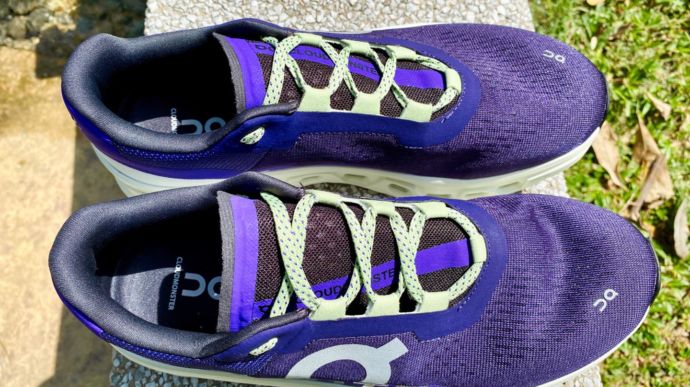 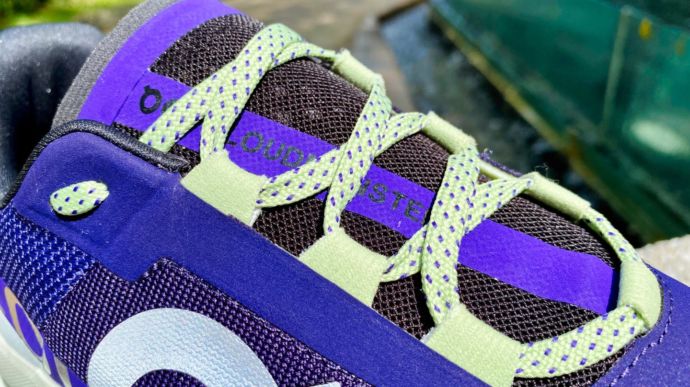 The On Cloudmonster is classified as a max-cushioned trainer but it feels more like a versatile daily trainer. It has the ability to handle slow paces as well as faster paces due to its springy Cloud cushioning system which propels you forward. The Cloudmonster is On’s softest, most cushioned trainer and extremely fun to run in.
WHERE TO BUY
LOWEST PRICE
$169
SHOE INFO
ON Running
Brand
On Cloudmonster
Model
Cushioning
Type
9.70 oz. (275 gr.)
Weight
169.95 US$
MSRP
30 mm
Heel
24 mm
Toe
6 mm
Heel Drop
WHO IS IT FOR
If you’re looking for a versatile daily trainer with a very unique ride, give the Cloudmonster a try. The Clouds on the bottom of the shoe compress with each footstrike, resulting in a dynamic, trampoline effect. It also has a high level of stability and lots of deep cushioning.
Help me choose

If a shoe brand gives all their running shoes names with the word “Cloud” in it, they better make sure that the rides of their shoes actually feel cloud-like, otherwise it’s false advertising. To me, On Running shoes have never felt like running on clouds. In fact, I’ve always found On trainers to be firm compared to other brands.

The CloudTec technology is something On has tried to make work, trainer after trainer but they’ve never quite gotten the recipe right. So far, it’s been a gimmicky technology which offers no advantage over regular slabs of midsole foams, similar to Nike’s Air Max and ASICS’ gel.

I would never have recommended an On running shoe to you before the Cloudmonster. On shoes are expensive and their performance has been somewhat lacking compared to the competition in terms of cushioning and energy return.

I have the Cloudflow 3 and I mostly use it for casual wear because it feels so flat and firm on runs. Its upper was supremely comfortable though, one of the most comfortable of all my running shoes.

The Cloudmonster is a brand new running shoe from On. It’s a maximalist trainer with a rockered and protective ride for long runs.

“Monster level cushioning for easy runs and long runs”, that’s the Cloudmonster’s description on the product page of On’s website. Monster level is above maximum cushioning level so it’s designed to be the most cushioned trainer in On’s performance running range.

The Cloudmonster weighs 275g (9.7 oz) for a men’s US 9 which is a competitive weight in the max-cushioned category. It also has a 6mm drop, measuring 30mm in the heel and 24mm in the forefoot.

The first time I walked around in the Cloudmonster, it reminded me of the Nike Vapormax because the Cloud pods on the bottom of the shoe felt like the air bubbles present on the Vapormax. I could feel the clouds compress as I walked around and I knew that this was going to be a fun shoe to run in.

The sensation of walking in the Cloudmonster can be likened to having cylindrical pieces of rubber attached horizontally to the sole of your shoes which easily compress every time you load the shoes. That’s exactly what the founders of On wanted when they designed the first On shoe.

The sizing felt long so I had to go a half size down from my normal US9. On uses the same sizing system as Hoka, Adidas and New Balance where there is only a half size difference between US and UK sizes so be careful if you use UK sizing.

My first run was an easy-paced run and what struck me was how much faster it was than I thought it was going to be. It wasn’t super soft like some other max-cushioned trainers and it felt more like a very well-balanced daily trainer.

The upper comfort and foot lockdown felt amazing while the ride was very well-cushioned. Transitions didn’t feel smooth because of the cloud segments which form the outsole. The Cloudmonster didn’t need any break-in period- it felt great from the get go.

On still uses Helion foam in the midsole of the Cloudmonster but the major difference is that the stack is much higher, so there’s a higher rate of compression.

Light runners under 70 kg (like myself) will find the midsole to have a decent amount of give but heavier runners will find the Cloudmonster very soft due to how much it compresses underfoot when loaded.

The actual foam doesn’t return that much energy but it’s the construction and structure of the Cloudtec sole unit that contributes to the energy return. According to On, one of the benefits of the Clouds is that they displace energy both vertically and horizontally. I can feel the vertical displacement but I can’t feel much horizontal displacement during transitions so it doesn’t feel like it’s propelling me forward.

I enjoy the Cloudmonster most on easy runs and steady-paced runs. It can handle slow paces above 6 minutes per km as well as moderate efforts, down to 4.30 per km because of how snappy it feels. This large pace range it can handle is what makes it versatile and such a great daily trainer.

The Speedbord in the Cloudmonster gives the sole structure but it also acts as a flexible “plate”, similar to what you find in the Endorphin Speed and the Tempo Next%. The Speedboard makes the forefoot feel snappy and this allows you to pick up the pace easily. The Speedboard still has a decent amount of flexibility so it doesn’t feel as jarring as a carbon-plated trainer/racer.

The Cloudmonster has a high toe-spring with a gentle rocker, very similar to the Nike Infinity Run Flyknit 3. This provides a forward, rolling motion which makes the shoe feel energy-saving and efficient during long runs so the Cloudmonster is an excellent long run shoe.

The Cloudmonster is a rare shoe that feels higher than it actually is. It’s 30mm in the heel but it feels taller than some carbon fibre racers which are close to 40mm. Even though it feels tall, stability is still very good and you don’t have to slow down when you corner.

There are 5 horizontal rows of clouds which form the Cloudmonster’s outsole. There’s rubber coverage on the heel as well as on the forefoot so the high wear areas have protection.

So far, I’ve seen accelerated wear on the usual area for me, the outer lateral heel as well as on the centre of the rearfoot which is not covered with rubber.

The Cloudmonster isn’t a tough workhorse like the Infinity Run 3 or the Triumph 19 so the outsole and midsole have a considerably lower lifespan. Grip is however also very good because the exposed rubber of the Clouds feels very tacky on most surfaces.

A long, deep, decoupled groove exposes the Speedboard and allows the midsole to compress more when loaded, increasing cushioning. There are wide flex grooves between all the rows of the Clouds which allow the Clouds to flatten when loaded.

On rarely disappoints with their uppers and the Cloudmonster is no different. The fit is incredibly comfortable and the insides feel velvety smooth. The Cloudmonster’s upper also doesn’t feel over-built like a lot of other max-cushioned trainers which have an excess of padding.

It has a burrito-style tongue which wraps around the foot and it’s attached on both sides. The tongue is thin and flat but you don’t feel the lacing pressure on top of your foot. It also doesn’t feel out of place like the Nimbus 24’s flat, knitted tongue.

There is enough padding in the heel tab and collar to provide excellent comfort while an internal heel counter ensures that your heel is locked in and supported. I didn’t need any runner’s knot and I still didn’t get heel slippage.

The fit of the Cloudmonster runs a half size large so I suggest sizing down because it has extra length. It has a narrow midfoot, forefoot and toe box but I didn’t find it too narrow. The toe box also feels shallow. It’s definitely not suitable for wide feet or high volume feet.

My favourite thing about the Cloudmonster is how unique its ride feels. There’s no other running shoe on the planet with a similar ride so the Cloudmonster has tons of character. Its rockered profile combined with the snappy Speedboard and big Cloud pods deliver a ride which is really innovative.

If you’ve always wanted to try an On running shoe, this is the one you must try. The Cloudmonster is an exciting trainer which has a really engaging ride. Its highly compressible midsole makes it fun to run in and it feels far from mushy.

At $170, the Cloudmonster isn’t worth its recommended retail price. It should be around $150 because it’s on par with the GlideRide 3. It does feel like a premium trainer because of its Swiss build quality but for $170, it needs to be something really special.

With the Cloudmonster, On has finally managed to improve the Cloudtec recipe. It still doesn’t feel like running on clouds but it’s a big step in the right direction.

As editorial policy, we do not accept free samples from companies.
We purchased this pair of On Cloudmonster at Running Warehouse with our own money.

ON Running On Cloudmonster Price Comparison

Visit ShopRunningWarehouse.Com
This page contains affiliate links. As an Amazon Associate I earn from qualifying purchases.
WHERE TO BUY
LOWEST PRICE
$169

Similar shoes to ON Running On Cloudmonster