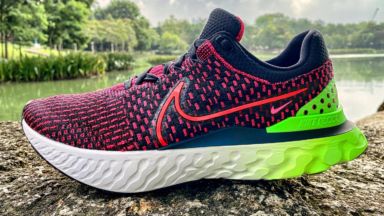 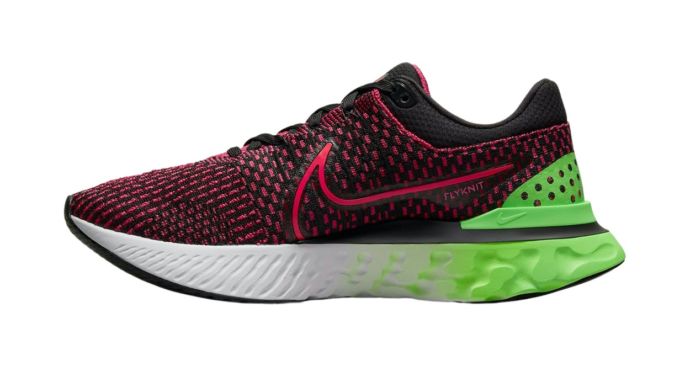 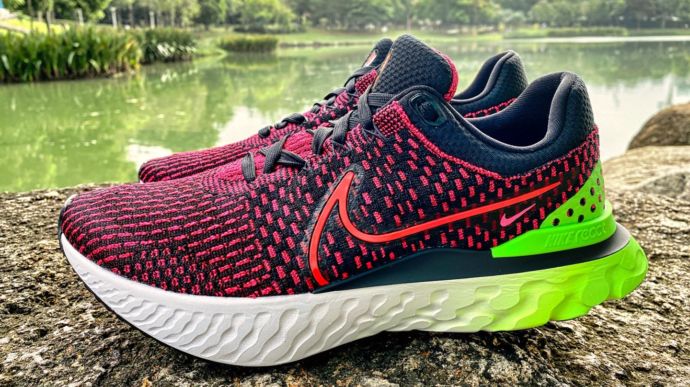 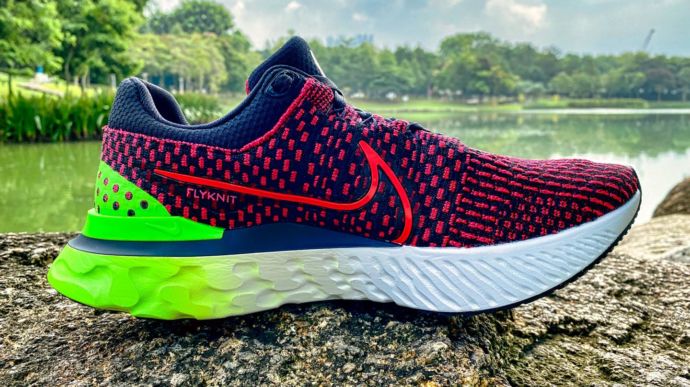 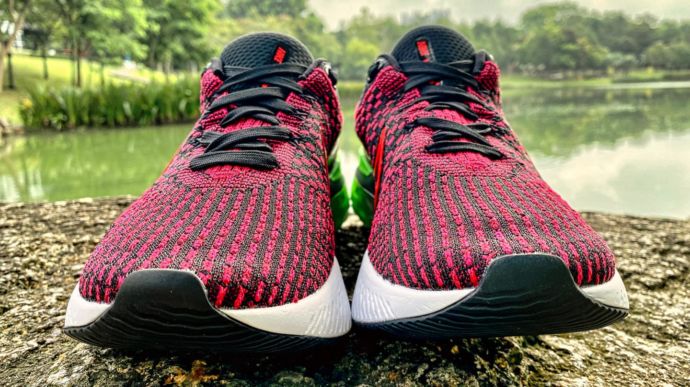 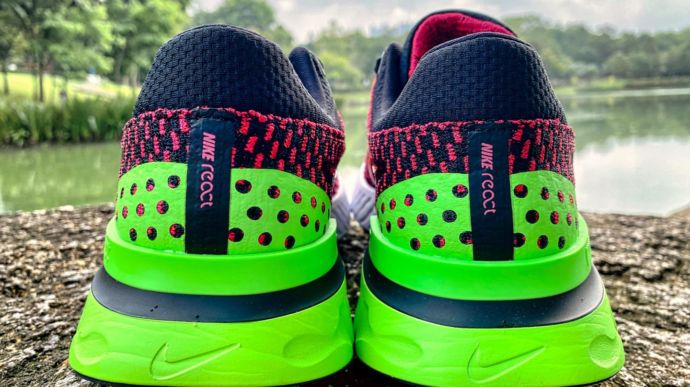 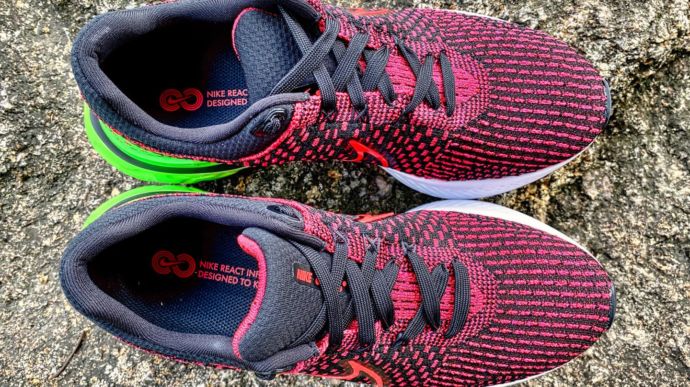 The Nike React Infinity Run Flyknit 3 is a neutral, max-cushioned trainer that feels like a stability trainer due to its stability features which includes arch support and a plastic heel clip. It’s best used for easy, recovery and long-distance runs because of its high level of cushioning and its gentle rocker. Version 3 has an updated upper which feels thicker as well as a new strobel lining which makes the ride slightly firmer.
WHERE TO BUY
LOWEST PRICE
$124
SHOE INFO
Nike
Brand
React Infinity Run Flyknit 3
Model
Cushioning
Type
10.20 oz. (289 gr.)
Weight
159.95 US$
MSRP
8 mm
Heel Drop
React Infinity Run 2
Previous model
WHO IS IT FOR
If you’re looking for a durable, stable trainer with deep cushioning, the Infinity Run 3 is the shoe for you. It doesn’t have much flair but it’s a dependable trainer with a more modern, more fun ride than the Pegasus.
Help me choose

The Infinity Run is an extremely popular shoe where I live. I see more Infinity Runs these days than Pegasus’. It has a smoother ride, a more comfortable upper and it’s a better looking casual shoe than the stalwart Peg.

The Infinity Run is the spiritual successor of the Epic React which Nike axed after just 2 versions and the Infinity Run is now one of Nike’s premium, max-cushioned trainers. It’s a neutral trainer but it’s designed to cater for both neutral and overpronators due to its stability features, unlike Nike’s other max-cushioned neutral trainer, the Invincible Run which is a lot less stable.

I’ve run in all versions of the Infinity Run. I really enjoyed the ride of the original Infinity Run but its big weakness was its loose heel counter which resulted in heel slippage and the problem persisted no matter how tight I tied the laces. Version 2 was a big improvement because its upper was a lot more comfortable and foot lockdown was excellent, however, the ride was exactly the same as the original version.

After running in exciting max-cushioned trainers like the Invincible Run and the Aurora-BL, the Infinity Run 2 felt really boring in comparison. Its ride lacked energy return and its React midsole felt firm in comparison to other, new generation midsole foams so I didn’t put a lot of mileage on the Infinity Run 2 after the testing period, apart from casual wear.

The Infinity Run 3 is only an upper update but there are some small tweaks under the hood which change its ride character. The Infinity Run 3 now weighs 10.2 oz for a men’s US 9 which is 0.3 oz (8.5 g) heavier than the previous version.

The first time I saw pictures of the Infinity Run 3, I thought I was looking at a new colourway of the Infinity Run 2 because they look almost exactly the same. I was really surprised that Nike carried the same midsole over from the previous 2 versions but I immediately took a liking to the launch colourway which is reminiscent of a watermelon.

When I put the Infinity Run 3 on for the first time and walked around in it, the arch support felt very prominent, just like in the last 2 versions. I have flat feet so I found that the prominent arch sensation took a while to get used to after not having worn the Infinity for a while.

My first run was an easy 9 km. The upper felt supremely comfortable but I definitely noticed that it was warmer and less breathable than last year’s version. Ride transitions felt very smooth because of the single-density midsole and the gentle rocker which was also noticeable.

During the first run, I found the ride of the Infinity Run 3 to be slightly firmer than the last version. The cushioning felt adequate and overall, it felt more efficient and not as mushy. The Infinity Run 3 still felt like a shoe for easy and recovery runs only.

There is only one change to the sole unit of the Infinity Run 3 and it alters the ride slightly. The insole of the Infinity Run 2 was glued down but if you lifted it up, you could see that there was one, large cutout, exposing the React foam. In other words, your feet sat on the foam and had direct access to it.

Another difference which comes as a result of the added strobel lining, is that the forefoot is stiffer and doesn’t flex as easily as the Infinity Run 2. The stiffer forefoot allows the rocker to function better, so the Infinity Run 3 feels more efficient during transitions.

2 years ago, back when version 1 of the Infinity Run was launched, its React foam felt squishy and very soft compared to other max-cushioned trainers. The Nimbus, Glycerin, 1080 and Triumph were significantly firmer. However, since then, the other brands have made significant advancements in their midsole foams so the React of the Infinity Run 3 doesn’t feel special or unique anymore.

It still has deep, bottomless cushioning which can handle full marathons with ease but you don’t get much energy return or liveliness during toe-offs. It feels “dead” compared to the ZoomX in Nike’s Invincible Run 2. The React foam doesn’t compress all that much when loaded so the benefit is that it doesn’t show a lot of creasing and it’s also a durable foam which doesn’t lose cushioning quickly.

This arch support makes the Infinity Run 3 feel like a stability trainer, even though Nike doesn’t use the word “stability” anywhere on the product page of the Infinity Run 3. It feels stable due to its wide base which flares out and its full ground contact outsole. Nike originally marketed the Infinity as an injury prevention shoe however this claim was never proven by any independent research.

A rocker midsole geometry gives the Infinity Run 3 a more modern, dynamic ride because it eases you through transitions. This becomes more noticeable when you increase your speed and drop your pace below 5.30 minutes per kilometre. I found the Infinity a lot more fun to run in than the Pegasus because I could pick up the pace much easier.

Even though the Infinity Run 3 doesn’t feel sluggish, it’s still built for slow running and that’s what I used it for. Easy runs slower than 5.30 per km are what the Infinity feels most suited to. It’s not a fun shoe to use for tempo runs or workouts because of its above 10 oz weight and its thick, warm upper.

Nike uses a softer, more flexible kind of rubber on the Infinity Run 3 than on other workhorse trainers such as the Pegasus and the Structure so grip is much better, as is flexibility but this kind of rubber wears down faster.

I’ve noticed wear on my pair on the edges of the rearfoot which are not covered with rubber but the rubber wear seen so far on the outer heel is not anything to worry about. I haven’t had any outsole durability problems with any of my Epic Reacts or Infinity Runs. Even after wearing through the outsole rubber, the React foam provides a durable, grippy outsole.

The Infinity Run 3’s new upper is thicker than last year’s version so breathability is not as good. The updated Flyknit on the Infinity Run 3 now represents a casual, lifestyle upper like one that you’d see on an Ultraboost from 4 years ago.

Some runners had ripped the tongue on their Infinity Run 2 from pulling too hard on it so the new version’s upper remedies this by being stronger and more durable. The tongue is still attached on both sides but it’s too long and it sticks up. I prefer the shorter, less conspicuous tongue of the Invincible Run 2.

The Infinity Run 3 has a similar external heel clip to the previous version which stretches around the entire rearfoot. It cups your foot and acts as guide rails for support. This heel clip has a wavy design instead of being straight like in the previous version but it doesn’t make any functional difference.

The fit of the Infinity Run 3 is true to size. It has an accommodating midfoot and toe box because of the stretchy knit that conforms to your feet so it’s suited to runners with high volume feet.

The heel pull tab which was present on the last 2 versions has been removed from version 3 but there’s still no reflectivity for low light conditions.

The Infinity Run 3 should have been a big update with a significant ride upgrade but what we got instead was a very similar shoe to last year’s version which was also very similar to the previous year’s Infinity Run.

After 3 years with the same sole unit, the Infinity Run is in dire need of a facelift. It needs a better, more engaging midsole foam than React and it needs a lighter, more breathable upper.

I liked the first 2 versions a lot but I like this one quite a bit less. These days, max-cushioned trainers are getting lighter, softer and more dynamic. This shoe gets the job done but it doesn’t get me excited.

Version 3 of the Infinity Run is heavier and firmer than version 2 so it’s not a better shoe. It does have an upper with a more solid build and it has a stiffer, firmer midsole which allows the rocker to be more effective.

The Infinity Run 3 is a very polished trainer with no major weaknesses but it’s lacking character. It’s basically the Infinity Run 2 with a thicker upper and a firmer ride. It doesn’t feel like a special shoe with a unique ride.

At $160, the Infinity Run 3 isn’t worth its asking price. The Nimbus 24 is the same price but it’s much softer and much more energetic.

The GlideRide 3 is also a max-cushioned trainer with a rocker but its rocker works better and it also has a softer ride than the Infinity Run 3. Both of those trainers are lighter than the Infinity so they are more versatile.

As editorial policy, we do not accept free samples from companies.
We purchased this pair of Nike React Infinity Run Flyknit 3 at Running Warehouse with our own money.

Visit ShopNike
This page contains affiliate links. As an Amazon Associate I earn from qualifying purchases.
WHERE TO BUY
LOWEST PRICE
$124
AVAILABLE ON SALE:Previous model $104