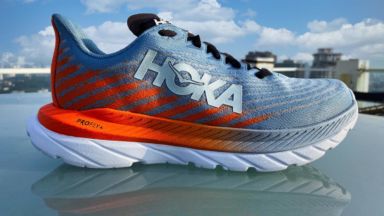 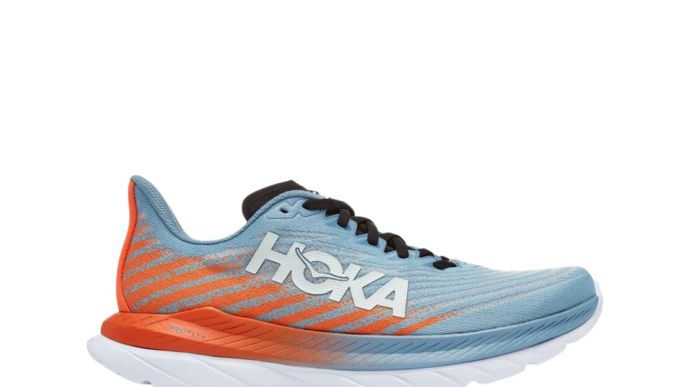 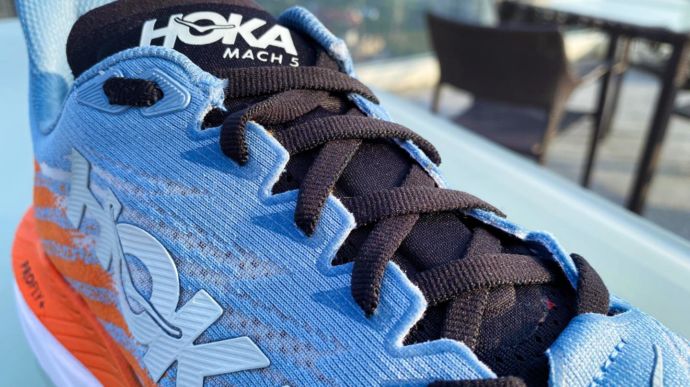 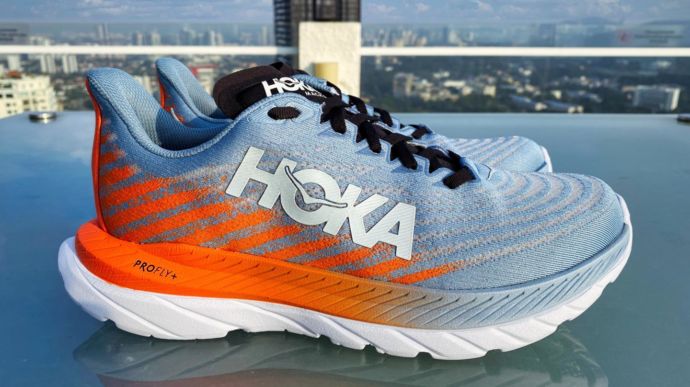 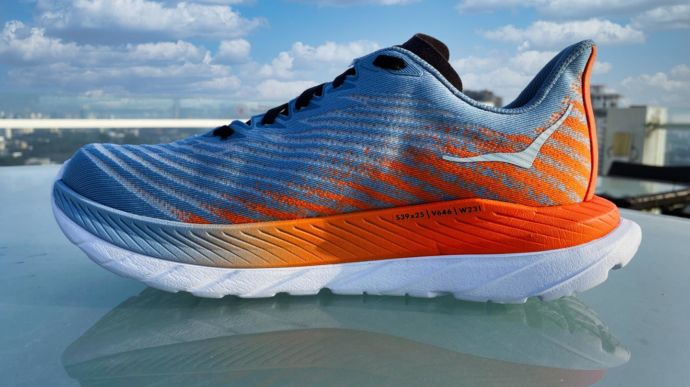 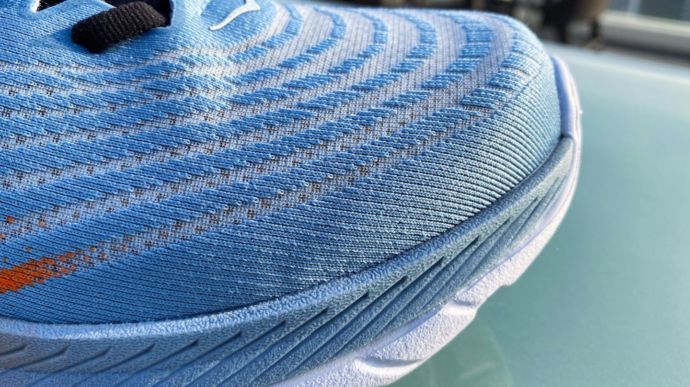 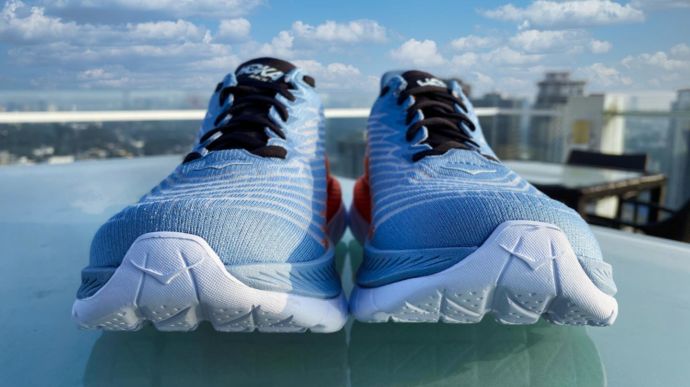 The Hoka Mach 5 is a lightweight, smooth-riding trainer which can fill a number of roles in your running rotation. Version 5 has a softer, supercritical layer of midsole foam, an improved fit and a lighter weight which makes it a great update.
WHERE TO BUY
LOWEST PRICE
$0
SHOE INFO
Hoka One One
Brand
Mach 5
Model
Racing
Type
8.20 oz. (232 gr.)
Weight
139.95 US$
MSRP
29 mm
Heel
24 mm
Toe
5 mm
Heel Drop
Mach 4
Previous model
WHO IS IT FOR
If you're a runner who seeks a light trainer and you don't care about durability, the Mach 5 is a shoe that you'd get along well with. The Mach 5 has a very balanced ride with good stability and a comfortable upper.
Help me choose

The concept of a training shoe with no outsole might not make much sense to you but once you take a run in the Mach 5, it will make a lot more sense.

What sets the Mach apart is that it doesn’t have a traditional sole setup of rubber attached to its midsole, it uses a firmer EVA foam as an outsole instead. This makes landings feel incredibly padded, smooth and very engaging.

No other running shoe series has had a bigger turnaround than the Mach series. Last year, the Mach went from a relatively unknown shoe, to one of the most popular Hoka trainers.

The recipe for the Mach 4 was simple: light, cushioned and comfortable. It makes you wonder why other brands don’t stick to this winning template.

The Mach 4 has been one of my favourite trainers in the past year. Its unique, lively ride and featherlight weight have been a joy to run in. My only qualm has been that I’ve really ground the outsole down from my heel striking. It looks like it has been melted down on a hot pan.

The Mach Supersonic was launched about 6 months ago and this was a weird move by Hoka because it was a concept shoe: a shoe designed to show off the new midsole and upper of the Mach which would be coming soon in future iterations. Half a year later and we now have the Mach 5.

The toe forefoot felt way too roomy and there was a lot of material puckering in the forefoot. I had to wait for the normal width version. When it did finally arrive, the normal width was much more comfortable and it fit my foot like a glove.

My first run was a 20-kilometre-long weekend run and the Mach 5 performed outstandingly well. It was smooth, well-cushioned and had a good level of energy return. The ride definitely felt softer and more lively than the Mach 4/Mach Supersonic while the upper was extremely comfortable. I didn’t need to adjust the laces once.

At the end of the run, my legs still felt fresh and I could have run further had it not been for the fiery sun beating down in the late morning sky.

The Mach 5 midsole setup is a simple one but it works so effectively: soft, lively ProFly+ as the top layer to provide energy return and pep, with ordinary, firmer rubberised EVA foam as the bottom layer for stability and durability.

The new formulation of ProFly+ is amazing. It feels a lot squishier than the ProFly+ that was in the Mach Supersonic and it provides a lot more bounce during toe-offs.

ProFly+ might just be my new favourite midsole foam. It feels a lot more forgiving than other supercritical EVA foams like Skechers’ Hyper Burst and Brooks’ DNA Flash while it feels more energetic than New Balance’s FuelCell which can feel mushy at times, especially if there’s no carbon plate. It doesn’t have the extreme bounce of ZoomX but it’s a lot more durable, it doesn’t chip or scrape easily.

The Mach 5 has a really dynamic, modern ride which is much more fun than traditional-riding trainers like the Pegasus, Ghost and Wave Rider. The midsole foam doesn’t feel as dense, the shoe isn’t bottom heavy and overall, it feels more nimble, more agile. The Mach 5 has a 5 mm drop which makes it easier to midfoot and forefoot strike.

The Mach 5 is an all-rounder. It feels forgiving at recovery/easy paces because of how soft the new ProFly+ layer is. It also has the ability to pick up the pace and do steady or uptempo paces because of the high energy return from the midsole.

Even interval workouts (below 4 minutes per km pace) are fun if you prefer plateless trainers for workouts. I enjoy the Mach 5 most on steady-paced runs between 5 minutes and 5:30 per kilometre although slower or faster runs are also really enjoyable.

The Mach 5’s biggest weakness is the absence of a traditional outsole. Having no outsole makes landing feels smoother and more padded than every other trainer but durability is extremely low, one of the lowest of all the running shoes currently on the market.

After 80 km of testing, I’ve worn down the outer heel areas significantly. There’s also wear showing on the forefoot under the ball of the foot. If you’re not hard on outsoles, you could get about only 400 kilometers max out of the Mach 5.

There’s a large cavity under the heel of the shoe which exposes the layer of Profly+. This increases cushioning softness in the heel. The cushioning from the midsole appears to be long-lasting and should easily outlast the outsole.

Grip is not great because there aren’t any lugs on the outsole. In the rain, especially on smooth surfaces, it feels slippery so I’d avoid wearing the Mach 5 in wet conditions.

The Mach 5 has a new creel jacquard engineered mesh which is thinner and more breathable than previous Mach uppers. Those who found the upper of the Supersonic too narrow will be glad to know that the Mach 5 has a wider, more spacious fit.

The fit is true to size but runs slightly longer and narrower than the average running shoe. It has a normal midfoot with a just-right forefoot and toe box.

The tongue is more similar to the Mach 4’s tongue than the thicker Supersonic’s tongue: it’s thin and asymmetrical. It’s also gusseted so there’s no tongue movement during runs.

The laces are very long so I have to use the last eyelets even though lockdown is already superb. Overall, the Mach 5 upper is comfortable, breathable, has great lockdown and disappears on my feet.

The Mach 5 reminds me of a luxury sports car that you only take out on weekends because you don’t want to put too much mileage onto it. I disagree with Hoka’s classification that it’s an everyday trainer. If you wore it every day, it would last you only a month during marathon training because its outsole wears down so quickly.

$140 sounds like a good price but the Mach 5 will only last half as long as the average daily trainer due to its lack of outsole rubber. If you ask me, the price should be around $120. The big question still remains, can Hoka make the Mach series more durable without changing its ride? If they can, it would be the perfect shoe.

As editorial policy, we do not accept free samples from companies.
We purchased this pair of Hoka Mach 5 at Running Warehouse with our own money.

Hoka One One Mach 5 Price Comparison

Visit ShopRunningWarehouse.Com
This page contains affiliate links. As an Amazon Associate I earn from qualifying purchases.
WHERE TO BUY
LOWEST PRICE
$0
AVAILABLE ON SALE:Previous model $89

Similar shoes to Hoka One One Mach 5