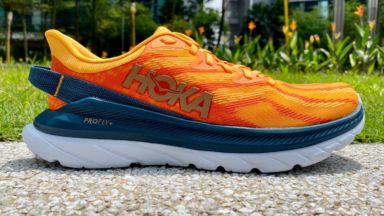 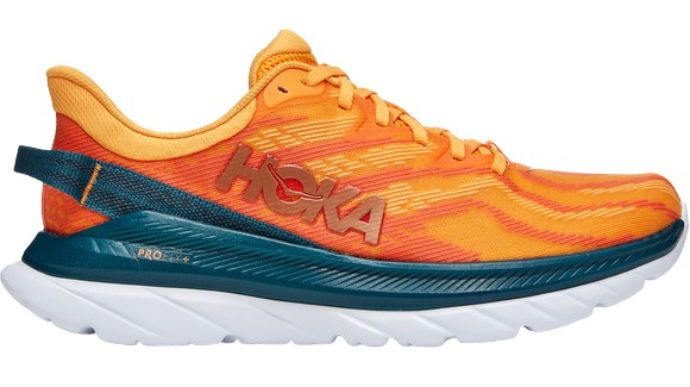 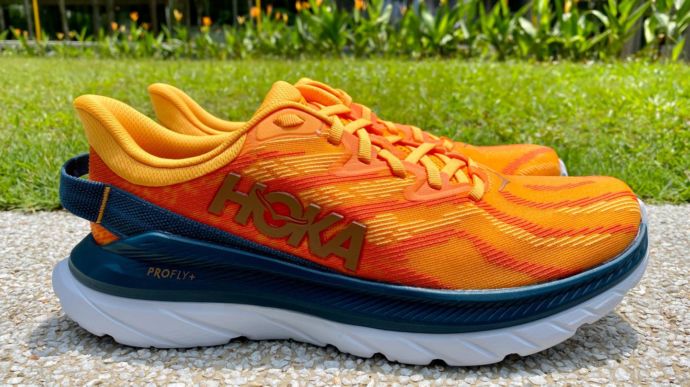 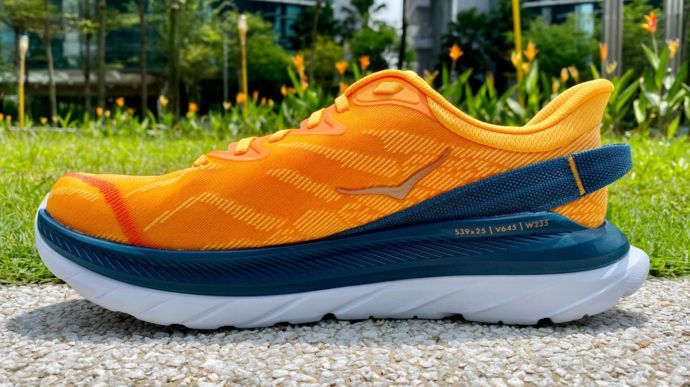 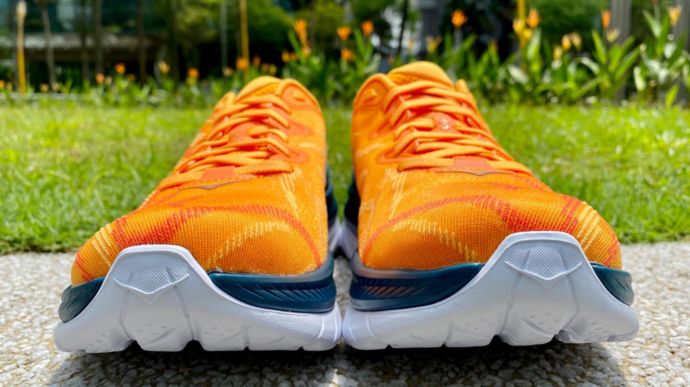 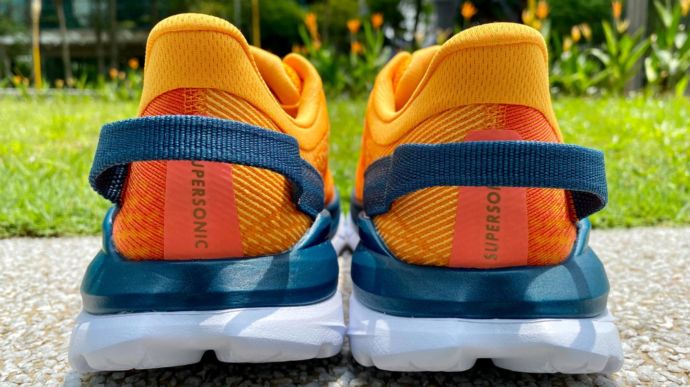 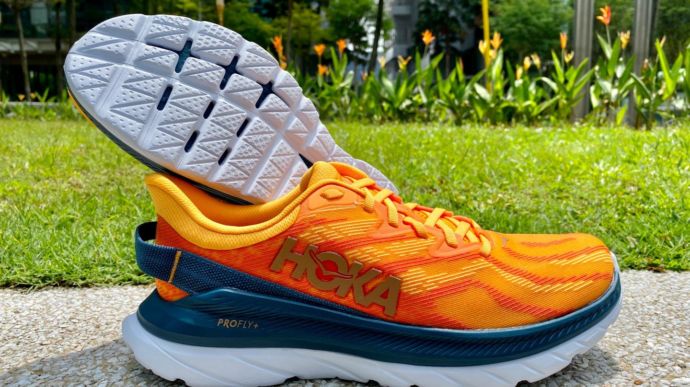 The Hoka Mach Supersonic is a speed trainer best suited to tempo runs and speed workouts. Its new ProFly+ midsole foam makes it firmer and easier to pick up the pace but also makes it less enjoyable for easy runs. The version is slightly heavier than its predecessor the Mach 4 but has a more comfortable upper with extra tongue padding.
WHERE TO BUY
LOWEST PRICE
$150
SHOE INFO
Hoka One One
Brand
Mach Supersonic
Model
Lightweight
Type
8.30 oz. (235 gr.)
Weight
149.95 US$
MSRP
35 mm
Heel
30 mm
Toe
5 mm
Heel Drop
WHO IS IT FOR
If you’re looking for a trainer for mostly fast-paced runs and you don’t like the feeling of carbon-plated shoes, then the Mach Supersonic is an excellent speed trainer for you. It has good stability and natural transitions which don’t feel jarring or stiff.
Help me choose

In the running shoe world, it’s rare that an update is so good that it launches an unpopular shoe into the spotlight. The Mach 4 turned the Mach series from an unknown shoe series into a household name.

It came as a big surprise not only to the average runner but also to retailers who didn’t anticipate consumer demand and didn’t order enough stock of the Mach 4. Many suppliers didn’t have the Mach 4 on the shelves for months. Now, supply has finally caught up with demand and there are a wealth of size and colour options to choose from.

The Mach 4 was one of the biggest hype shoes of last year and for some very good reasons: it was extremely light for the amount of cushioning that you got, it had a superb upper which was impeccably comfortable and it was also very versatile.

After training in it last year, the Mach 4 quickly catapulted to my list of top, non-plated running shoes of the year. What made the Mach 4 so special for me was that there was no firm rubber attached to its midsole, so landings felt padded and engaging. The foam also felt really energetic and well-balanced, suitable for most types of runs.

My only concern when it came to the Mach 4 was durability. The rubberised EVA outsole shredded like butter on high wear areas so I found myself having to save the Mach 4 for special, occasional runs. It wasn’t a tough workhorse that you could put through the wringer.

The Mach competes with other non-carbon-plated trainers which can go fast such as the ASICS EvoRide, New Balance Rebel, Adidas Boston and Hoka’s own Rincon.

On the Hoka website, they state that the Mach 4 was designed for logging everyday miles: they saw it as a daily trainer. However, the Mach Supersonic is built to go fast; it’s designed for speed.

The first time I saw pictures of the Mach Supersonic, the new ProFly+ foam was the thing that caught my attention. A supercritical foam like ProFly+ should theoretically make the Mach lighter and livelier.

When I tried it on in the store, the most noticeable change was that the fit felt more narrow than in the previous versions. Walking around in the store, the cushioning also felt denser and firmer than the Mach 4.

My first run was an easy 9 kilometres and my initial thought was that the Mach Supersonic didn’t feel like an easy day shoe anymore. It felt more responsive, more suited to speed workouts and faster paces.

My second run was a speed workout consisting of short 300 and 400 metre sprints. The Mach Supersonic felt much better on that run than the first run. It felt extremely snappy for a non-carbon plated trainer and transitions were very smooth.

I also noticed a little bit of a loose heel which I never experienced with the Mach 4. This was probably due to the extra cushioning which was present in the upper.

The Mach Supersonic felt slightly blocky and stiff initially. It took a couple runs for the foam to soften up and become more flexible.

The Mach Supersonic excels at fast paces below 5 minutes per kilometre. Its new ProFly+ midsole has less give so this firmer toe-off makes it easier to pick up the pace in the Supersonic.

Steady, tempo and workout runs are what I use the Mach Supersonic for. This is the fastest-feeling plateless trainer that I’ve used. It has a forefoot which is relatively stiff for a non-plated shoe so it still feels really snappy. You get the benefits of speed but with natural-feeling transitions.

A buttery-smooth ride is one of the most noticeable characteristics of the Mach Supersonic. Because of the full ground contact outsole and the absence of outsole rubber, landings feel padded, almost like you’re running on a foam yoga mat.

Hoka calls their new ProFly+ a supercritical foam but it doesn’t return as much energy as other supercritical foams like New Balance’s FuelCell or even Skechers’ Hyper Burst. ProFly+ feels like an ordinary EVA foam, very similar to what they’ve been using in the past.

The thick, firmer layer of rubberised EVA foam below the ProFly+ forms the midsole as well as the outsole of the Mach Supersonic. This setup is what gives the Mach its signature ride.

Stability is very good in the Mach Supersonic. The firm bottom EVA layer provides a stable base while the ProFly+ foam has raised edges which form guidance rails to keep your feet centred during transitions.

As you’d expect, a running shoe with no outsole wears down extremely fast. The Mach Supersonic has about half the outsole life expectancy as a regular running shoe with a carbon rubber outsole. I’ve done 170 kilometres in my Mach 4’s and it looks like the heel area has been melted down on a hot pan.

On my pair of Supersonics, there is also significant outsole wear on the heel area. The grip is good because the soft outsole feels very tacky on all surfaces, wet or dry.

The Supersonic’s upper is more comfortable than the Mach 4’s upper but it does come with some caveats.

Its padded tongue does a much better job at shielding your foot from lacing pressure however the extra padding allows your foot to move further forward, away from the heel counter, resulting in a loose-feeling heel. You need to use a runner’s knot and you need to pull the laces really tight in order to get a decent lockdown.

It was a bizarre design choice to add a padded tongue to the Mach Supersonic. For a shoe which is designed to go fast, you want the lightest possible weight. This is the main reason the shoe has picked up weight over its predecessor.

They’ve also added a massive heel pull tab to the Mach Supersonic which is more convenient but wasn’t necessary and it also makes the shoe heavier.

The new upper material feels thinner and more breathable however the new tongue makes it more puffy and warmer so it isn’t a cooler shoe than the Mach 4. Hopefully the Mach 5 will have a thinner tongue.

It fits true to size but it does feel narrower and less roomy because of all the extra padding in the tongue. This is not a shoe designed with wide feet in mind.

The Mach Supersonic is a different shoe to the Mach 4 but I wouldn’t say that it’s better. It’s more suited to fast runs whereas the Mach 4 is better suited to slower runs. It has a firmer ride than the Mach 4 for springier toe-offs but it also weighs more because of its extra upper padding.

The Mach Supersonic is the kind of shoe that I’d recommend for you if you want a plateless speed trainer without a jarring ride and if you also want lots of cushioning. It has more cushioning than the EvoRide 2 and the Boston 10 but it’s firmer than the Endorphin Speed 2 and Rebel v2.

You need to be wary of durability before you buy the Mach Supersonic. It doesn’t have traditional carbon or blown rubber on its outsole so it’s one of the least durable outsoles on the market. If you are hard on outsoles and you want a shoe that lasts a long time, stay away from the Mach.

With the imminent arrival of the Mach 5, the Mach 4 is currently being heavily discounted so you can get it for almost $50 less than the Mach Supersonic. Unless you prefer firmer rides, I suggest getting the discounted Mach 4 instead and saving cash.

The new supercritical midsole foam in the Supersonic isn’t an upgrade over the Mach 4’s regular EVA foam. It still doesn’t have the energy return which I crave from a Hoka shoe. It does however make it easier to pick up the pace which is what Hoka designed the Supersonic to do.

As editorial policy, we do not accept free samples from companies.
We purchased this pair of Hoka Mach Supersonic at Running Warehouse with our own money.

Visit ShopZappos
Sorry - Product not found. Please try RunningWarehouse.Com to check in their assortment.
This page contains affiliate links. As an Amazon Associate I earn from qualifying purchases.
WHERE TO BUY
LOWEST PRICE
$150

Similar shoes to Hoka One One Mach Supersonic