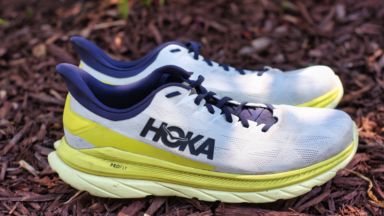 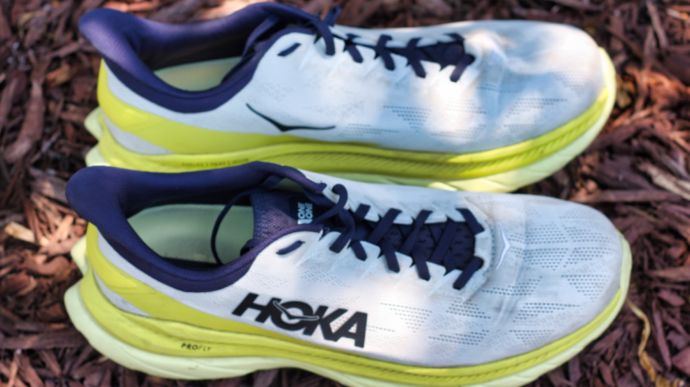 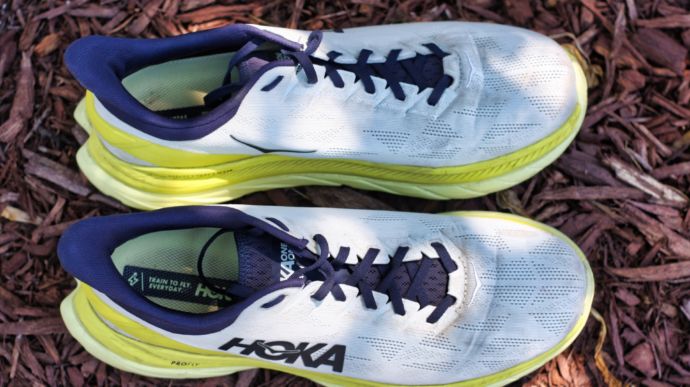 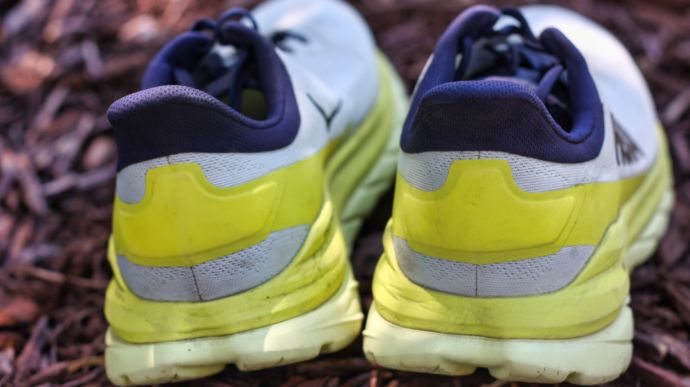 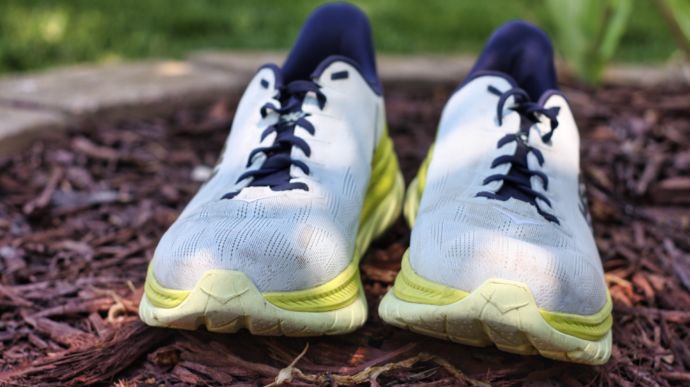 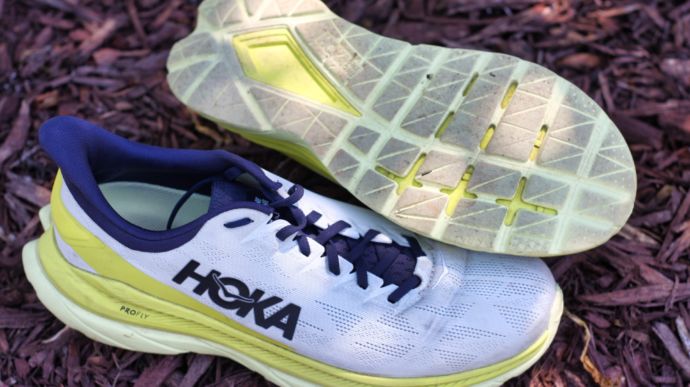 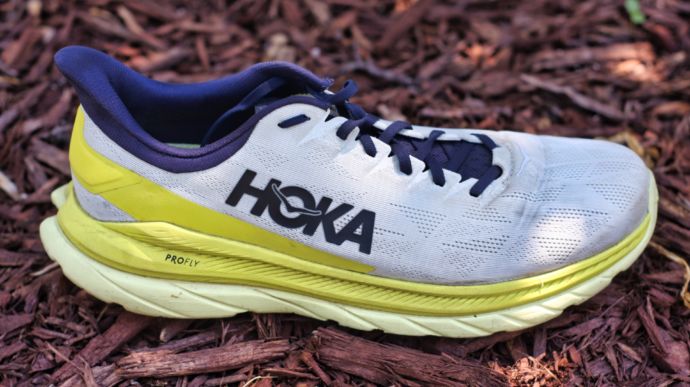 The Hoka One One Mach 4 is a well-cushioned everyday trainer that likes to pick up the pace. Feeling almost like some of its plated cousins, the Mach 4 will check off most of the boxes.
WHERE TO BUY
LOWEST PRICE
$89
SHOE INFO
Hoka One One
Brand
Mach 4
Model
Cushioning
Type
8 oz. (227 gr.)
Weight
130 US$
MSRP
10 mm
Heel Drop
WHO IS IT FOR
This shoe is great for any runner, beginner or experienced. With plenty of cushion for larger runners while still lightweight for the speedsters.
Help me choose

Hoka One One Mach 4 Intro

The Hoka One One Mach 4 is the latest update in one of the more popular tempo shoes in the Hoka line. However, with the update for this version, Hoka opened the door for many more uses and more runners.

Through the use of Hoka’s new PROFLY foam, the shoe offers a softer, yet more responsive, ride than previous models.

Coming in at $130 dollars, this shoe is also a considerable bargain. It will go up against the likes of the New Balance FuelCell Rebel v2, Saucony Ride 14, Altra Rivera, and their own Clifton 8.

However, unlike most of those offerings which I’ve tried, this shoe has a blend of cushion and responsiveness that seems to be equal to that of $150 offerings.

Hoka One One Mach 4 First Impressions

I was excited to get a pair of these shoes and get them on my feet. I got the very nice light blue and yellow colorway, and was not disappointed by the looks of these shoes.

When I unboxed them, I just wanted to get them on my feet and get out the door.

My initial wear was a 10k with 5k at tempo, and they responded from the get-go. At no point did my feet feel uncomfortable, they were ready to go from mile 1.

I then wore them the next day to school, and even on “tired foam” they were some of the most comfortable shoes I’ve worn. Just the right amount of give.

Hoka One One Mach 4 Sole Unit

On the sole unit of the Mach 4, Hoka One One used their new, more responsive, PROFLY foam. This foam increases the cushion feel, while also providing more energy return from previous foam offerings.

This is the foam developed for, and implemented in, the Carbon X racing shoe.

As is normal with the Hoka offerings, there is a lot of foam under foot. In this offering, there is 35mm under the heel and 30mm under the toe-box (5mm drop).

This amount of cushion protects your feet well, but also means there is not a lot of ground feel if that is important for you.

To cut back on weight, Hoka used a rubberized foam outsole. This outsole gives plenty of traction for all the runs in which I used them. However, they will begin to show wear very quickly.

This is purely aesthetic, as I have logged more than 150 miles in mine so far and have not seen any drop in grip. But this decision served its purpose as my size 13 came in at 9.2oz.

The sole unit uses a rockered design to help ease your heel-toe transition, and propel you forward.

This is not as pronounced as in some of the other aggressive offerings on the market, think Saucony Endorphin line, but is noticeable when you pick up the pace, or when running downhill.

Hoka One One Mach 4 Upper Unit

The upper has been redesigned to be more comfortable for more runners, and especially those with wider feet. The Mach 4 is not offered in wide sizes, and Hoka has the reputation of running narrow.

In fact, I have had issues with Hoka in the past because of their narrow toe-boxes. This was not an issue with the Mach 4.

The company widened the base slightly, and used a soft, breathable engineered mesh material that is very forgiving.

The upper runs true-to-size, and I had very few complaints about the design. Although the star of the show is the cushion, the upper is also where I found one of my other highlights, the new anatomical Achilles tab.

An afterthought for many runners, this feature is something at the front of my mind for shoes after suffering my Achilles tendinitis.

This anatomical tab pulls away from the Achilles and lessens the irritation and pressure felt on the tendon. It’s great.

The upper, however, is also where I will find my biggest complaint, the laces. (I know, if I’m complaining about the laces then there’s not much to complain about.)

Before I got my hands on a pair, I had been told to look out for the extremely long laces.

This wasn’t an issue for me, but I think I know why, these laces were designed to fit size 13+ shoes and are placed on all the size offerings. No, the length wasn’t my issue, it was that they were thin and easily came untied.

Due to this, I ended up lacing a little tighter and felt pressure across the top of my feet.

Hoka One One Mach 4 Conclusion

Just great. These shoes were some of the best I’ve run in recently, and I would put them up there with the Saucony Endorphin Speeds. Not quite to the same level, but close.

They did everything I asked them to, and I felt they were up for each challenge.

There was plenty of cushion for my long runs, taking them 13+ on multiple runs and feeling great while doing so, and were responsive enough for my tempo runs, hitting goal 5k tempos with ease.

At no point did I feel unstable, or that the shoe was a liability. Frankly, there is not much I’d change about this offering, just the laces.

Yes, the outsole will show wear, but that has not affected the performance on any run I’ve done.

My outsoles started showing wear about 20 miles in, but have shown roughly the same level of wear for the next 100 miles after, and have gained very little since then.

This is something that some might not like visually, but it does not affect the run, nor my enthusiasm for recommending this shoe.

My recommendation? If you’re a neutral runner, you should get your hands on a pair of these and enjoy your next run. They are great for everyone.

We purchased a pair of Hoka One One Mach 4 from runningwarehouse using our own money. This did not influence the outcome of this review, written after running more than 50 miles in them.

Hoka One One Mach 4 Price Comparison

Similar shoes to Hoka One One Mach 4