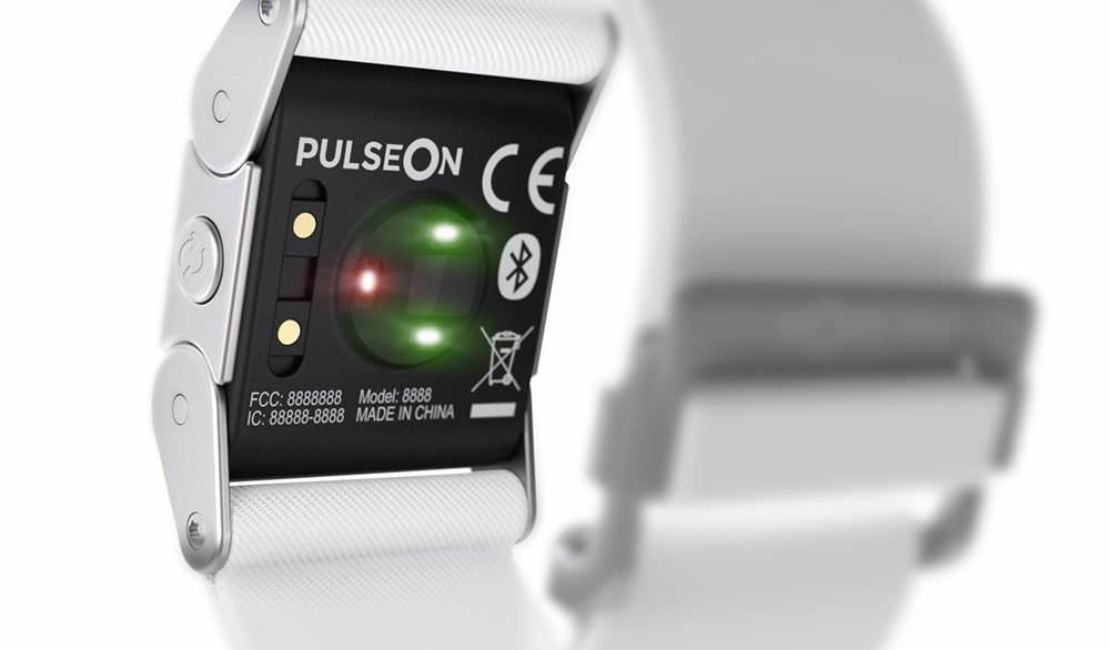 The PulseOn watch is a simple and small wrist-worn activity watch that monitors your heart rate and can also sync with your phone to add GPS data to workouts.

It features a square body that connects to a cloth wristband via Velcro. Users can pick between the provided small or large bands for the best fit.

The watch band, made from a soft fabric, looks great in prototype photos and 3D renderings. Then you take the watch out of the box and realize the band is a lost fantasy. It’s hard to put on, it’s hard to keep in place, it holds your sweat, the metal clasp can pop off, the Velcro can scratch if you don’t put it on correctl… you can tell I’m unhappy with the band.

To attach the watch, you flop the cloth strap around your wrist and fiddle with the cloth tip until it barely loops through the metal clasp, then you attempt to shove this band through a loop that seems to be the same width as the band, and then you give up and yank on it until it seems about right. I say about right because the end result looks far from the beautiful CGI renderings of the watch. I’ve been using this watch for over a month and still can’t figure out the best way to put it on.

You want to like this watch, you really do. It’s got a great story behind it and it has a wonderfully unique design.

How could you go wrong when you start with five experts in sensor technology and develop the product in Finland? I mean, the watch even has dual illumination methods to maximize skin tone change detection.

The Adidas Fit Smart watch I reviewed only had one color to illuminate the skin for reading your heart rate. Well, this PulseOn watch doesn’t come out on top. It doesn’t even beat out standard chest straps.

The PulseOn watch came into the spotlight when the company launched an Indiegogo for the watch. It closed on July 31st 2014 with only 56% of the desired funding.

PulseOn managed to receive additional funding later on through various sources, but I find the lukewarm indiegogo to nicely represent how the watch stand up in the market.

It’s not a Fit Bit since the battery can’t last a whole day. It’s not a GPS watch since you need to pair it with your phone to get the GPS. It’s not a regular watch with added features since the battery in standby can’t make it a few days. It’s not even a “more accurate” wrist-worn HRM since I found it to be *LESS* reliable than the already unreliable Adidas Fit Smart.

About all that’s left to make this watch stand out is the size, but you can get a smaller footprint with the Fitbit Charge (and better HR data).

Screenshots of the app

So where does that put this watch? It’s not a failure, but definitely not good enough to recommend for any single purpose. If you want a smallish wrist worn HRM with a cloth strap, this would be your watch.

What does save this watch a bit is the app. It was very simple and easy to use, and provided a simple to follow training schedule that recommends different workout intensities based on your current fitness and past workouts.

I like that the data is displayed without too many frills, but I dislike how you only have the data on your phone. Most every other HRM device allows for you to download the data. If you *really* want the data, you can browse through your phone’s folders and find a sqlite database with your data. Everything else is up to you. One more thing about the app is that it drains your phone battery somewhat fast, but you

Screenshots of the app

Interacting with the watch is also simple since it has just 2 buttons. I thought I would get easily frustrated with this, but they did a good job setting up the user interface to accommodate just two watch navigation buttons.

However, I’d kill for a third button so I could pause workouts. Or at least make it such that pressing and holding both pauses the workout.

I was going to give this watch an extra rating bump since they planned on releasing the API to interact with the device, but that’s not the case:

It appears they only let you listen in on the live bluetooth data, which is nice, but this is not what an API for a device like this should be.

The screen looks flashy with the white led display and that is totally true if you use the watch indoors or at night.

Do not bother reading this in direct sunlight, you’ll only strain your eyes and barely make out the numbers. The screen is plastic and has no edge guards to keep you from scratching the screen.

Although I treated this watch the same as my Ironman watch, it developed 10x the scratches in 1/10th the time

The watch face after several weeks of use

The battery life is ok for this watch. I found I could get 3 hours of continuous use, and that bumped up to just over 6 hours if I let the screen automatically shut off. Standby time was poor, the watch would run out of battery after a few days when it was not even being used. The biggest issue with the battery is that the watch RESETS EVERYTHING if it is completely shut off. It’s like a fresh out of the box experience, every time. The time resets to 8pm and you have to sync the watch with a phone before you can use it.

I nearly forgot to talk about the charger! It’s a clip style charger, something that you see on some Garmin devices. You just clip the charger onto the watch and make sure the electrical contacts are lined up. You learn fairly quickly how to align everything after messing with it a few times during your first charge. And then the charger breaks.

At least mine did after a few weeks of use. The pin that holds the middle together slipped out by a few millimeters. Now the rightmost electrical contact barely works and I have to carefully align everything to get a charge. Before you ask, yes, I did try pushing the pin back in, and I tried pressing down everything to realign the holes. Did not work. I’m sure I could get it fixed if I spent an hour on it, but I’ve mostly given up on this watch and do not care enough to fix it.

The PulseOn Heart Rate Monitor is conceptually a great watch, but it seems that numerous sacrifices were made during the design process which resulted in an ok, but not great watch. The app offers useful training advice and is simple to use.

If the watch had double the battery life, a normal buckle band, and was a tad more accurate, I would recommend the watch. But it doesn’t have those features, so I do not recommend this watch and encourage those interested in this tech area to look for alternatives.

The Brooks Adrenaline is a tried and true stability trainer. While you could ...(Read expert review)

The Hoka Carbon X 2 is a high performance super shoe which specialises in ...(Read expert review)

The Dynablast is a good lightweight trainer that offers a classic ride. ...(Read expert review)