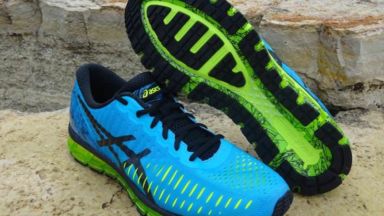 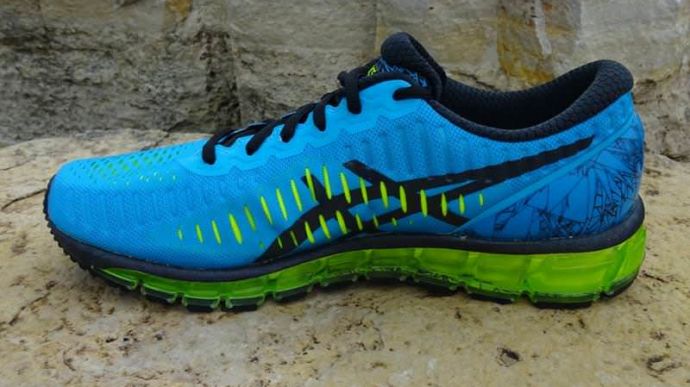 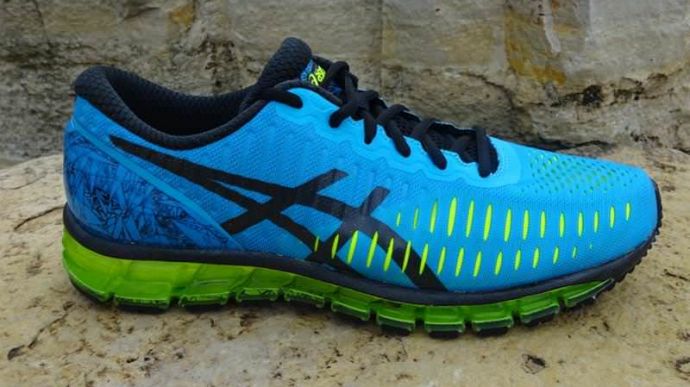 The shoe is all about “cushioning” and comfort with a full-length GEL midsole which provided smooth ground contact during each run without being too “springy”.

I found the seamless upper to be very comfortable and the shoe did fit true to size although some runners may find it to be a bit narrow in the midfoot.

The shoe is built with plenty of cushioning underfoot and comfortable from top to bottom. I did find this this newest ASICS to be a bit pricey for an everyday trainer.
WHERE TO BUY
LOWEST PRICE
$69
SHOE INFO
Asics
Brand
Gel Quantum 360
Model
Cushioning
Type
13 oz. (369 gr.)
Weight
170 US$
MSRP
10 mm
Heel Drop
Jun / 2015
Release Date
WHO IS IT FOR
The ASICS GEL-Quantum 360 is quality daily trainer for those neutral runners who are looking for an ultra-cushioned shoe which delivers a quick and responsive ride with durable traction underfoot.
Help me choose

The debut of the ASICS GEL-Quantum 360 offers a quality daily trainer delivering a soft ride during entire foot strike and is aimed at being ASICS most cushioned neutral shoe.

The key feature that sets the new Quantum 360 apart is the introduction of the first “360 Degrees” of GEL Cushioning throughout the midsole, the most GEL of any shoe in the ASICS line-up.

The moment I took the shoe out of the box and went for the first run, I could feel the generous GEL Cushioning throughout the midsole along with the comfort of the stretch mesh seamless upper.

My initial thought was if there would be too much GEL underfoot making the ride too soft during my runs. I was pleasantly surprised that the new GEL midsole offered a smooth rid, no bounce, while the upper kept my foot secure and in control during entire transition.

The Quantum 360 joins the benefits of a plush full-length Solyte® midsole with the new “360 Degrees” of GEL cushioning combined with a FluidFit™ seamless upper for a solid neutral performance trainer.

I found this unique and new design to deliver a reliable and comfortable ride during entire ground contact.

The sole unit of the Quantum 360 is what sets it apart from all the other ASICS models. With “360 Degrees” of GEL cushioning from heel-to-toe, the shoe provided a smooth ride and excel shock absorption during ground contact.

The use of a Solyte® midsole which sits between new GEL midsole and upper allowed me to have more responsive feel underfoot and when combined with the additional GEL Cushioning built into the Forefoot and Heel helped my foot to feel reduced shock during ground impact.

The shoe incorporated with a full-length “Trusstic System” which is a clear durable plastic aimed at increasing efficiency and control for a responsive feel during a runner’s foot strike.

The outsole design was a bit more “aggressive” than I prefer for a daily trainer. It is comprised of the durable ASICS High Abrasion Rubber (AHAR) designed for logging lots of miles.

I felt this shoe performed better on varying types of surfaces rather than on simple, smooth roads which the Nimbus 17 or Kayano 22 excel on as they have a less aggressive outsole.

The shoe performed well as it I could feel the additional cushioning without being too “springy” and I felt in control during each foot strike.

The midsole and outsole combined to deliver a plush and responsive ride throughout transition during each of my runs, whether short or long. The Quantum comes with an 10mm heel-to-toe drop allowing me to feel the road more.

The Quantum 360 includes the ASICS FluidFit™ seamless upper which is comprised of a lightweight synthetic material which looks firm from the initial outset however is soft and comfortable once the shoe is laced up.

The design of the upper joins multi-directional stretch mesh with stretch reinforcements for comfortable fit which I found to be very comfortable and flexible as it molded to my foot.

The seamless mesh delivered a snug and secure fit during each run and there were no irritation or hot spots during any outings.

The seamless upper construction is similar to that which is now found on the latest Nimbus 17 and Kayano 22 for ASICS.

For me the shoe fit true to size in all areas, however, runners with a more wide foot may find the upper a bit narrow in the midfoot.

The Heel Clutch, or heel counter, kept my foot securely locked in place and inline during each run and provided ample stability and security during each run regardless of the type of terrain I found myself running on.

The heel counter is made of a thin, plastic material which extends all the way to the midfoot which is intended to increase support along with overall heel comfort and control.

As with many ASICS models, I found the Comfort Dry Sock-liner to be comfortable and breathable, something I have come to count on when running in ASICS shoes.

The overall fit of the Quantum 360 upper was comfortable and kept my foot secure and provided the control I would want in an everyday trainer.

The combination of the seamless upper with the extended heel counter provided a responsive ride and allowed my foot plenty of flexibility while still providing the stability I desired during ground contact.

The ASICS GEL-Quantum 360 is a daily trainer for neutral runners and everyday athletes who want superior cushioning and durability.

The Quantum 360 has a unique target market that may not suit every neutral runner looking for highly cushioned trainer.

The use of the new full-length “360 Degree” GEL cushioning midsole which is the core of this shoe, delivers ample cushioning, without being bouncy, providing a smooth, and responsive transition throughout entire ground contact.

The use of a seamless mesh upper that wraps and molds to the foot provides a very comfortable fit. For myself, the fit was true to size however for those needing a more wide midfoot, they may find it a bit snug.

For those neutral runners who are looking for that ultra-cushioning shoe, the Quantum 360 should be one to consider taking out for a run.

The shoe offers a plush cushioning, comfortable upper and a smooth, responsive transition while encountering various types of terrain when running.

However, I think many runners may find this first version to be a bit pricey for an everyday performance trainer.

We thank the nice people at Asics for sending us a pair of Gel Quantum 360 to test. This did not influence the outcome of the review, written after running more than 50 miles in them.