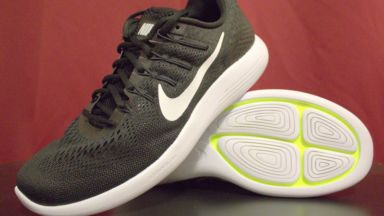 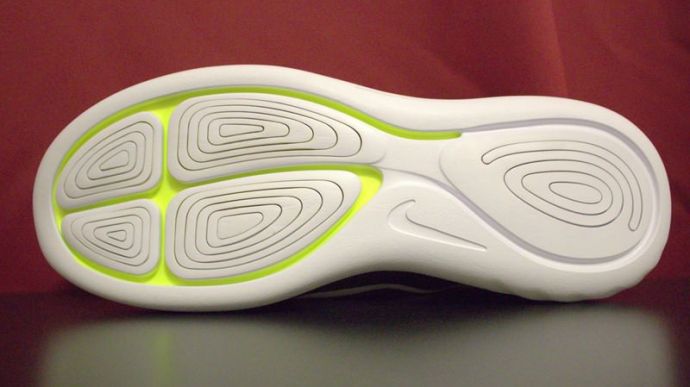 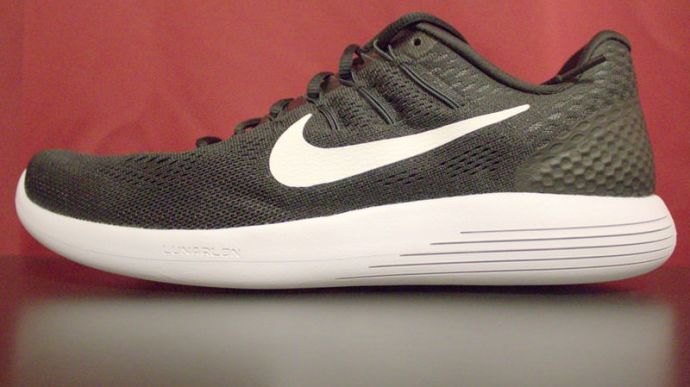 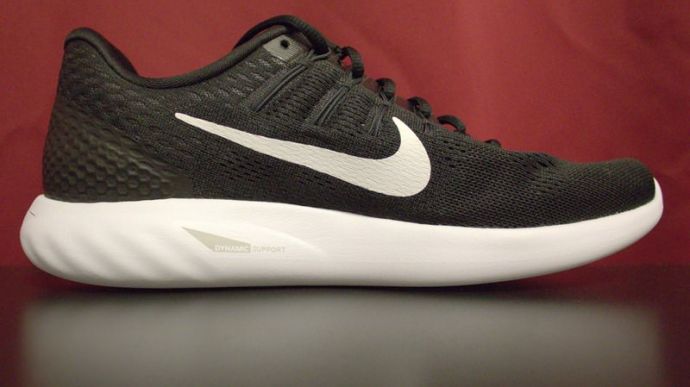 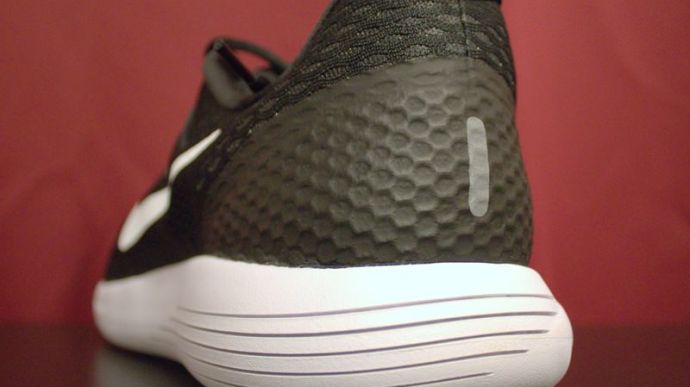 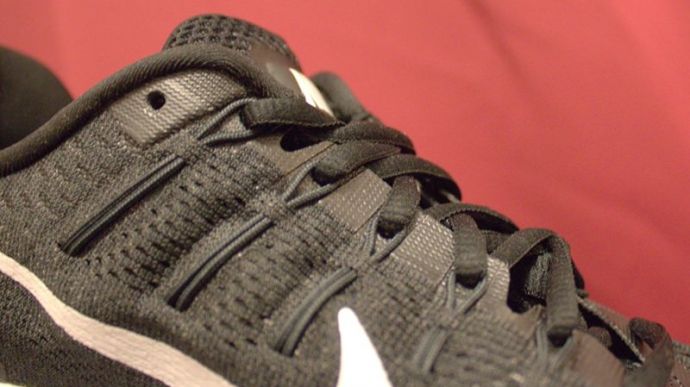 The Nike LunarGlide 8 is a cushioned trainer that provides a smooth, stabilized ride for runners. Featuring several new design concepts, it brings few updates to the successful LunarGlide line of shoes.
WHERE TO BUY
LOWEST PRICE
$120
SHOE INFO
Nike
Brand
LunarGlide 8
Model
Stability
Type
9.10 oz. (258 gr.)
Weight
120 US$
MSRP
10 mm
Heel Drop
Sep / 2016
Release Date
Lunarglide 7
Previous model
WHO IS IT FOR
This shoe is great for runners who stick to roads and treadmills who look for a daily trainer with a bit of extra support in a lightweight and sleek package.
Help me choose

From the top view, these shoes looked like a standard set of Nikes, almost mimicking the upper on the LunarTempos.

But the side-view on these shoes reveals a few distinct slits that leave you curious as to what Nike’s up to. It’s only when you flip the shoes over that you see what Nike was really up to. They made a secret topographical map of the 5 mountains surrounding area 51!

That’s a little crazy. So what are all the slits, lines, highlighted routes, and smooth contours of the outsole for? And why are there matching slits on the side for?

The quick answer is to add more traction and comfort, and make the shoe look neat. I just had to figure out with my testing how much it was for function and how much was for form.

Featuring a padded 29mm heel stack height and 19mm stack height, this shoe gives you a 9.5 mm offset on a soft foundation that I noticed immediately on my first run. It felt stable, smooth, and moderately comfortable without feeling over padded.

The LunarGlide shoe was designed to deliver a cushioned ride with some stability without coming in too heavy. It’s not as light as the LunarTempos, so the added weight is going mostly to additional support.

Other Nike shoes designed with support in mind are the Zoom Odysseys and Air Zoom Structures.

The other main difference on the 8s is that they have a smoother heel support. All these changes really make the LunarGlide 8s look almost unrelated to the LunarGlide 7s.

Although I think the fit between the two shoes will be somewhat similar, I highly advise any LunarGlide 7 owners to cautiously try out the 8s before committing to them due to all these changes.

The LuanrGlide 8 should fit into your life as a daily trainer and could be used for casual racing.

Since all the features and designs of these shoes blend into each other without screaming “I’M A RUNNING SHOE”, in you could also use these as lifestyle shoes. (Assuming you don’t buy them in neon green or neon orange).

This is one of a few style of shoes out there that can be pretty much identified just by the outsole. Nike’s been known to do fun stuff with foam to outsoles (see the Nike Free RN Motion Flyknits).

The LunarGlide 8 style leans towards a minimalist pattern, using a siping technique to add sliced contours into an otherwise featureless foam outsole.

These concentric contours add traction to the sleek outsole, but aren’t enough to help the shoe in rough environments such as trails or wet gravel.

One other reason to avoid the rough environments is because of the shoe’s magnetic attraction to small rocks. These little rocks get wedged between the foam layers and you sometimes get a big enough rock stuck in there which makes clacking noises as you run.

It’s not terribly frequent, and the rocks you get aren’t as big as the ones that get stuck in Nike Free shoes, so the rock problem is more like a rock nuisance. Like a mediocre rock band practicing in a garage a few streets down from you.

You’ll notice it sometimes, but you’ll be fine with your life. Moving away from bad wordplay, we see that there are a few extra laser cuts on the side of the midsole.

Those guys are mostly for looks, but do make the sidewalls a tad more flexible under compression. Taking a closer look at the side of the midsole and we see that it’s slightly rounded, rather than cutting straight down from the upper.

This makes the shoe a little easier to roll than some other stability shoes like the Adidas Ultra Boost STs. The overall shape of the Lunarlon foam midsole gives your feet a bit of extra support and feels pretty light on runs.

I did not feel any unusual pressure points during my testing runs, and I felt the midsole to stay responsive on training runs.

The midsole felt less responsive on faster paced runs, where a thinner midsole might have been a better fit. Overall, the sole of the shoe felt at home on easy to moderate runs.

Imagine a little socks around your feet. Now wedge a couple of foam pieces behind your heels. Now wrap that all up in a mesh, and tie it together with Flywire, and you’re now wearing an imaginary pair of LunarGlide 8s.

Those several layers on the shoe with Flywire hold your feet in snugly, which I really enjoyed while wearing these shoes.

Just note that since it’s a mesh upper instead of Flyknit, your feet and toes can’t flex a lot through the upper to make more room, so any pressure points while wearing the shoes means you should go up a size or try a different model.

These shoes fit true to size on me, but some other reviews note that the toebox feels small. I really liked the external heel counter on these shoes.

It gets the job done and blends into the heel with a small dab of reflective material just at the bottom for added safety.

It’s a step down in intensity from the Lunarglide 7s which had a pretty big plastic loop running around the heel. The LunarGlide 8’s smooth external heel counter combined with the springy and plush foam in the heel gives the shoe a nice look and a nice fit.

The last notable feature on the upper is the use of Flywire. Each shoelace loops through a thick string that attaches to the sole of the shoe to give your feet a snug fit.

I’ve had some gripes with Flyknit in the past deteriorating on me, but I think the newest version is fairly robust and will hold up to several hundred miles of running.

It’s a solid shoe, but why did Nike change so much going from the 7s to the 8s? The LunarGlide 7s were a well-loved shoe with great reviews, so it’s unusual to see Nike re-do lots of the shoe.

All of the changes to the upper and sole seem to play well together though, giving you a stable and comfortable ride. I think the LunarGlide 8s deliver as a daily trainer, but you might want to check out the 7s before you try the 8s.

We thank the nice people at Nike for sending us a pair of LunarGlide 8 to test. This did not influence the outcome of the review, written after running more than 50 miles in them.