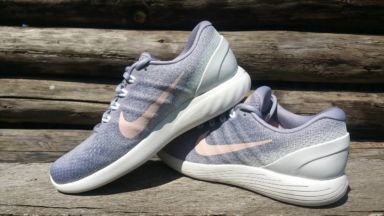 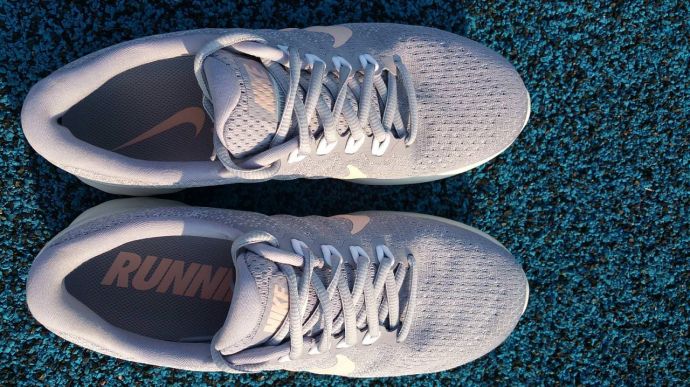 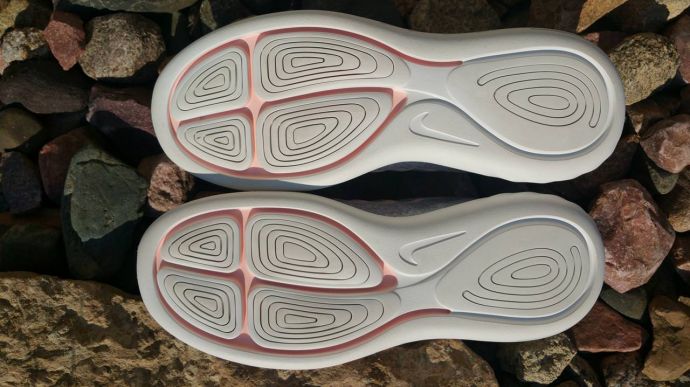 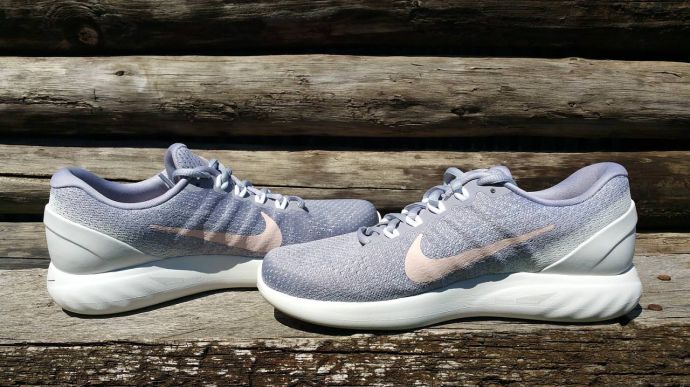 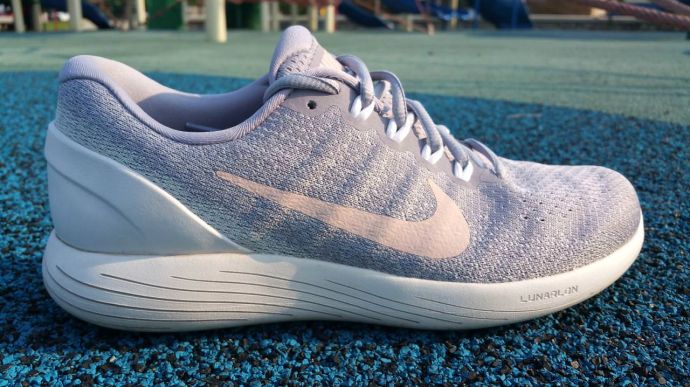 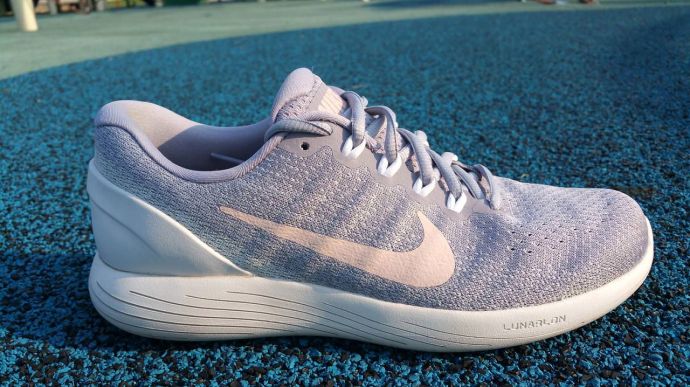 Nike Lunarglide 9 is an extremely comfortable, lightweight shoe with just enough stability to consider it a serious running shoe—and is a great-looking shoe as well.
WHERE TO BUY
LOWEST PRICE
$120
SHOE INFO
Nike
Brand
Lunarglide 9
Model
Stability
Type
9.30 oz. (264 gr.)
Weight
120 US$
MSRP
10 mm
Heel Drop
LunarGlide 8
Previous model
WHO IS IT FOR
This shoe is designed for those who have mid to high arches and who value a light, smooth ride with a secure upper and flexibly shallow toebox fit.

Soft. In a good way! That’s the primary thing that comes to mind for me when running in this shoe. The look screams “wear me with that cute t-shirt dress” (Ok, and I will), while the run in them whispers…”next marathon shoe?”

Maybe. I love the more narrow heel and secure toebox of ASICS GT-3000 for the longest training runs, but this one is so light and comfortable, it’s in the…running. I love Ravenna 8 so much too; we’ll see what Ravenna 9 brings to the (table) road.

I wrote a little poem to describe my first impression…
Ode to Nike Lunarglide 9
Cute. Casual?
You don’t look like a serious stability shoe.
-Hello hidden Flywires!
Wow, great arch support,
Your heel, it counters.
Looks like appearances can be deceiving.
And maybe running in you will be like
…Walking on the moon.

Lunarglide 9 retains the same sole unit pattern that was revamped between the 7 and 8: slits and smooth contours bring comfort and traction, while collecting some rocks, not a huge problem while running.

The upper’s Flywires are now concealed and are made of a wider, softer string for increased comfort.

A friend in my running group pointed out that these shoes make a “squish” sound when stepping, and it seems to be coming from the medial Flywires rubbing against the upper.

I finally went back to visit Dr. Coffin my podiatrist, to be fitted for custom orthotics, and in the process learned a couple things that influence this shoe review. (Note: I’ll still test shoes without the orthotics in, to give accurate reviews.)

He explained more about the subtalar joint which is located below the ankle joint and allows for the foot’s side to side movement.

He demonstrated how its laxity causes my arch to flatten (overpronate) which tightens the plantar tendons, which then pull my toes into hammer toe position, causing my left foot pain.

(My arches don’t flatten when walking, he observed, so it must just happen when my muscles fatigue and the pounding increases mile after ran mile.)

Ok, but the reason I bring this up toward the Lunarglide review is that at the end of my appointment he placed each foot in saran-wrap-covered gel after correctly aligning my knee, ankle, and big toe joints, to get a mold for the orthotic.

It felt really comfortable yet awkward, like my foot should flatten out more.

HERE’S THE POINT: When I was walking out of the office in my Lunarglides, the stars aligned, and I realized that the “high arch support” that I’d noted in this shoe actually held my foot in a similar position to how my foot felt in the gel.

Alright, but the shoe’s heel is just a bit too wide for its heel counter to help hold my narrow heel upright;

The shoe’s midsole compression pattern shows that it’s still happening to some degree and also proves its lack of durability with significant impression after only 45 miles on the shoe.

On a positive note, the doctor said that none of the shoes I brought with me that day are shoes he’d recommend against running in (the afore mentioned as well as adidas Supernova, New Balance Vongo v2, and ASICS GT-1000); individual factors will determine who likes and needs which shoe.

Here’s a quick list of shoes that Lunarglide competes with in the market, with some comparisons and contrasts.

Ravenna 8
Brooks’ Ravenna 8 is more snug in the heel than Lunarglide 9, but otherwise the shoe feels very similar besides Nike offering a more flexible forefoot underfoot.

Supernova
Lunarglide 9 is lighter and more flexible than adidas Supernova and rides with a less-bulky feel, lower toebox height, and similar room in the heel (slightly more snug).

Europa
Europa from Under Armour is more snug throughout, better at late stage overpronation control yet offers less arch support.

GT-1000 6
Lunarglide is slightly less supportive than the 1000 (that flexible forefoot) yet similar in secure midfoot fit and room in the heel for a medium-width heel.

Vongo v2
This is a similar feel to what I think the Vongo v2 was trying to accomplish, but Nike does this one better: lighter and more snug in the midfoot; my 3rd metatarsal “spot” didn’t start hurting in Lunarglide like it did in the Vongo v2.

While the v2’s sole is less flexible in the forefoot, the upper is more flexible (less secure) through the midfoot.

HOKA ONE ONE Arahi
Lunarglide is as light as Arahi yet offers its lightweight support with a mid drop height (10mm as opposed to 5), higher arch support, and similar lack of midsole durability.

Lunarglide 9’s sole unit retains many of its features from the 8 after being revamped between the 7th and 8th versions of the shoe.

The outsole consists of four pods under the fore/midfoot and one under the heel, all sliced in concentric circles with a technique called siping which is used in tires to allow the tire to flex more and also generate heat, which aids in grip.

I don’t notice any heat generated in the running shoe version, but it’s definitely a flexible sole under the forefoot, while Dynamic Support holds the midfoot stiff (where our feet are stiff), which is necessary to support the foot.

Grooves around the concentric pads also aid in flexibility and traction—while continuing to be a rock catcher as in the last version.

It’s not terribly annoying, but you will get a click-click-click from a lodged rock now and then, in this shoe. The sole’s material and grip pattern definitely make this a road shoe versus trail.

The sidewalls have longer and now diagonal laser cuts along the lateral edge which lessen the support of the shoe but aid in its overall “soft” ride.

The Lunarlon foam has a slight rounding on the bottom making it more prone to roll, but the overall shape banks out from the shoe just a little bit to help combat this and provide support.

Lunarlon is so very light and soft—yet that comes with its equal yet opposite down side of low durability. I found this shoe to be comfortable and function well for all types of runs.

This version’s upper has been changed from the engineered mesh of the 8 to a jacquard style mesh, which has more of a knit-like feel and appearance.

“Jacquard” is a term meaning, “a fabric made on a loom fitted with a jacquard, with an intricate variegated pattern [diff colors in irregular patches].”

The shoe fits a medium-width heel well and is cupped by an external TPU Heel Counter to keep the rearfoot upright throughout the footplant.

A moderately-plush heel collar brings the shoe’s comfort up around the ankle, and testing.shows this upper to have a bit more room in the toebox than the previous version.

The upper is breathable and supportive without being restrictive (no hot spots). Revamped Flywire cables—that are now concealed within the upper—hug your foot as you tighten the laces.

The Flywires are closer to the width and material of the shoe’s strings than they are to previous versions of the Flywire from Nike and thus secure the foot without the potential to “dig in” as much, if you like a tight fit.

Lunarglide 9 is sooo light and comfortable while providing a smooth, supported ride. Given its early compression of the midsole, however, I better pause running in it now with 65 miles in, if I want its full ethereal glide for my marathon!

There was some unhappiness with the changes made from Lunarglide 7 to Lunarglide 8, but if you enjoyed the 8, you’re likely to love the 9–Let us know in the comments!

We purchased a pair of Lunarglide 9 at runningwarehouse with our own money. No free sample. This did not influence the outcome of the review, written after running more than 50 miles in them.