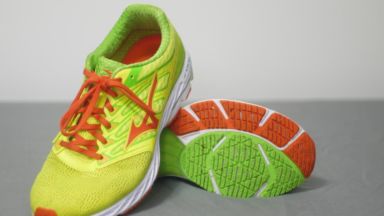 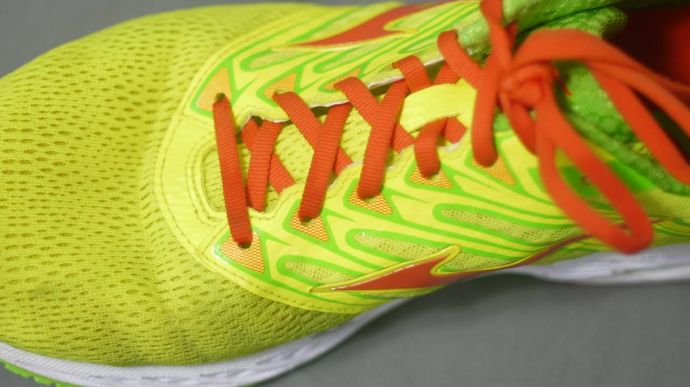 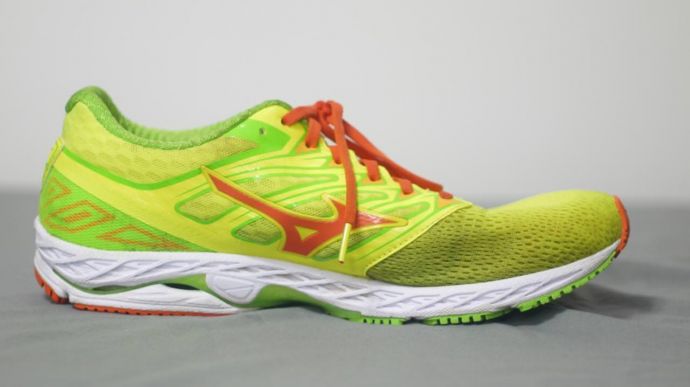 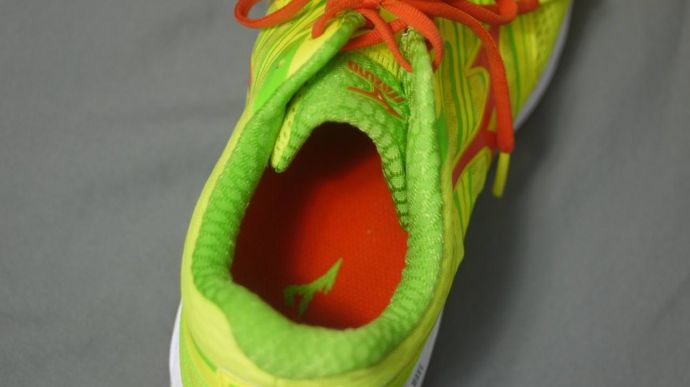 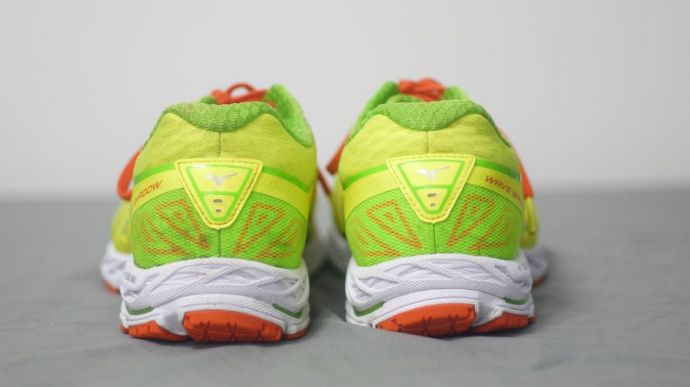 The Mizuno Wave Shadow is the first in a new line of shoes designed to be lightweight daily trainers. It performs well, but has a few quirks that keep it from being a great shoe.
WHERE TO BUY
LOWEST PRICE
$36
SHOE INFO
Mizuno
Brand
Wave Shadow
Model
Lightweight
Type
8.80 oz. (249 gr.)
Weight
110 US$
MSRP
8 mm
Heel Drop
Jul / 2017
Release Date
WHO IS IT FOR
This shoe is best for intermediate to advanced runners who like the support and cushioning unique to the Wave design found in Mizuno shoes, and who don’t mind a few drawbacks to get this design in a light shoe.
Help me choose

These Wave Shadow shoes are designed to be top quality daily trainers with lightweight+durable construction.

They come in at 9oz in men’s size 9 (data taken before product official launch so check the sidebar to get the right info) and have an 8mm heel to toe drop.

What sets Mizuno apart from these shoes is the Wave platform, and outsole design which are created to provide you a smooth and stable ride in a neutral trainer.

Although the Wave Shadow shoes are a new line of shoes from Mizuno, they feel more like the next iteration of the Mizuno Wave Sayonaras since they’re both lightweight daily trainers.

Considering that the Wave Sayonaras figuratively said “sayonara” and are no longer sold by Mizuno, it makes the Wave Shadow feel even more like the Sayonaras replacement.

If you are coming from the Mizuno Wave Sayonaras, you’ll notice the 8mm heel-toe offset gives the shoe a slightly more natural feel when compared to the 10mm Sayonaras.

You’ll also notice the upper has thick overlays and a more porous looking fabric surrounding the toebox. The other big difference is the design of the outsole.

When I first opened the box, I felt like the shoes were named by a low-key anarchist. The shoe has “shadow” in the name, yet the color I got is literally called “Safety Yellow / Red Orange / Jasmine Green”.

It’s been awhile since I last ran in a pair of Mizuno shoes for trainers (around 10 years), so it was nice to be reacquainted with the brand.

I do use the Wave Universe flats for some speedy races, but those don’t count for daily trainers. The Wave Shadows felt adequate and I had to really tighten the laces to make the show fit my narrow feet.

First run in the shoe was ok, besides the crumpling toebox. More on that in the rest of the review.

Mizuno is holding on hard to their “Wave” technology as hard as Nike holds onto their “Nike Air” technology. Nike Air tech is pretty straightforward, where you just have an air pocket in shoe in place of foam cushioning.

Mizuno wave is a totally different type of sole tech. The Mizuno Wave is designed to keep flexibility only in directions where cushioning is required while maintaining firmness to the direction where stability is required.

For you nerds, it’s patent 6289608. In the shoe, it’s a wavy piece of plastic that spans the width of the shoe, starting just beneath the heel and goes into the midfoot.

It makes it harder to roll the rear of your foot towards one side or the other, but does not restrict the shoe from flexing in the heel to toe direction. Did I notice it? A little!

I think you should test out the shoes to see if you want more lateral stability when landing and toeing off, since the wave feature is lightly used in this shoe.

The interesting part about the Wave tech used in the shoe is that it leaves gaps below the ‘crest’ of the plastic wave and the top of the foam beneath it.

It saves a little weight, makes the heel a little less stiff, and increases the chances of something getting stuck in the side of your shoe a little more.

Mizuno has put in some big gaps in other types of shoes, as I can remember getting a pretty big twig stuck in the side of my first Mizunos I ran in years ago.

Not much of a risk with the Wave Shadow shoes, but something to consider if you want to take them on the trail. Underneath and above this wave plate is U4ic foam, which feels maybe a little stiffer than Nike’s Cushlon foam.

Mizuno designed this foam to be light, while still keeping the cushioning of their similar AP+ midsole foam. Mizuno also uses a fairly thick insole (about 5mm thick) to pad your foot a little extra before hitting the U4ic foam.

The U4ic foam sole feels light with just enough cushioning for everyday running. This was not my go-to shoe for longer (10+mi) runs, since I felt like the foam was not soft or forgiving enough on my feet.

The foam felt otherwise great for my regular runs and even short fast workouts. One last note about the foam is that it makes some funky lattice patterns on the sidewalls.

I’m not a fan since it’s just there for aesthetics and fills with dirt/dust, so maybe I’m not the target runner for that design.

Now take a look at that outsole! It has a few large patches of rubber thinly sliced up into narrow grids. This didn’t seem right to me.

Having so many small pods of rubber is a great choice for shoes that need traction on smooth surfaces, like basketball or badminton courts, but is unnecessary for road or track running.

It honestly seems like Mizuno took one their shoe designers from a different sport (like badminton), and told them to design a sole for a running shoe.

What we got was a sole with excellent traction for smooth surfaces and a sole that picks up tiny rocks all the time on the road.

I’m sure you’re familiar with the squeaking noise some shoes make on basketball courts, well, this shoe does that on the court, and also on brick walkways if you scuff your feet a little. Bizarre. The whole outsole looks misplaced on a running shoe.

As for the type of rubber on the outsole, it’s durable high-carbon rubber that Mizuno calls “X10”. The design of the rubber segments and layout of the outsole makes the Mizuno “SmoothRide” platform.

It’s designed to minimize “rapid acceleration and deceleration of the foot during transition”, so it’s like a shock absorber for your feet. I couldn’t find more data on this, so the best I can say is the shoe feels normal.

The striking yellow upper is made out of several different fabrics, so it’s not following the seamless trend. As for the color, you do get a choice of different colors besides yellow (yellow/blue/white for men and grey/purple/blue for women).

The brightest area is right around the toebox, and it is made of a sponge-like thin fabric that has excellent breathability, although a little weak.

To strengthen it, Mizuno put in an underlay at the top of the toebox, and that underlay is one problem on the shoe. It creases into itself when you bend your foot forward while keeping your toe on the ground.

This is a pretty annoying behavior since it folds down to your toes and rubs against the top of your toes. After enough miles, you’ll start to get chafing. Also, it doesn’t look so great with a crinkly toe.

Putting in the right underlay is a tricky business. The Adidas Energy Boost shoes I tested a while ago used an underlay that was too thick and your socks would catch on the edges. It’s no dealbreaker, but be aware this problem shows up after 10 or so miles.

Your midfoot is held in place by some thicker leather-like overlays that blend into thinner overlay, which all run up to the lacing holes.

To even out the pressure of the lacing system on the top of your feet, Mizuno put down a second thick fabric layer beneath the laces. This increases durability and comfort.

I thought it was blended in nicely since I didn’t even notice it until poking around the shoe with my fingers.

The tongue beneath this lacing system is pretty standard, and runs down to the sides of the shoe in addition to connecting to the bottom of the toebox. This keeps the tongue from flopping over to a side, and gives your feet a slightly snugger spot to fit into.

Rounding out the back of the shoe is the heel which I thought was done pretty well. The base of the heel is stiff and structured, and it transitions as you move up into a cushier and more flexible set of fabrics.

I had zero issues with the heel losing shape or flopping around on my runs. I also noticed no unusual wear on the fabric, since you sometimes get fabric ‘pilling’ at the inside of the heel (see the Brooks Hyperion heel for this).

If it was 2012, I’d like this shoe a lot more. I think Mizuno is lagging behind the current running trends and you can feel it in the Mizuno Wave Shadow shoes.

Mizuno had a chance to introduce a few risky changes when making this new line of shoes like a seamless upper, or trying a new material instead of plastic in their “wave” plate.

Rather than push it, they stayed pretty close to their existing design and seemed to focus just on keeping the shoe somewhat light.

You can still have a good shoe without trying new tech, but the irritating toebox and unusual outsole keep me from giving this shoe a good recommendation.

We thank the nice people at Mizuno for sending us a pair of Wave Shadow to test. This did not influence the outcome of the review, written after running more than 50 miles in them.

Visit ShopRoadRunnerSports
This page contains affiliate links. As an Amazon Associate I earn from qualifying purchases.
WHERE TO BUY
LOWEST PRICE
$36