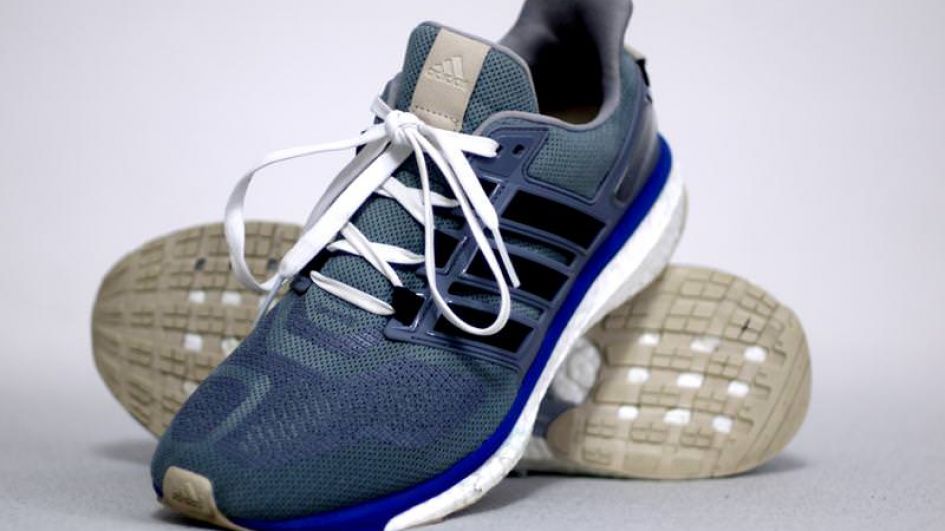 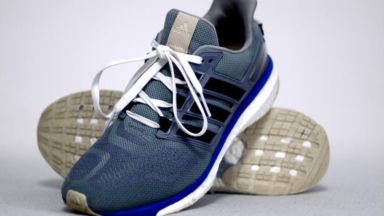 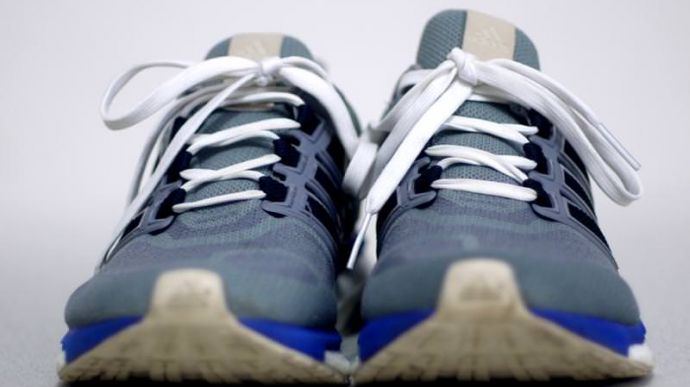 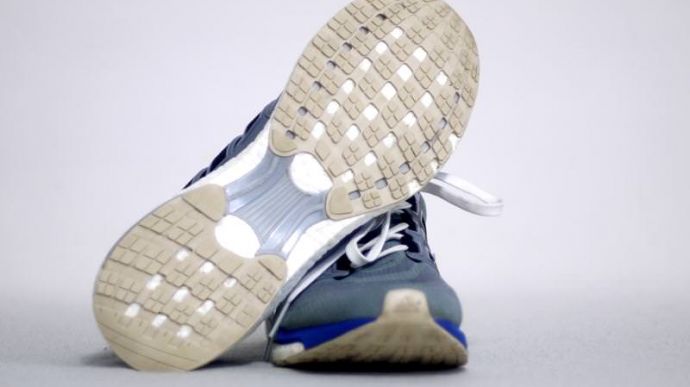 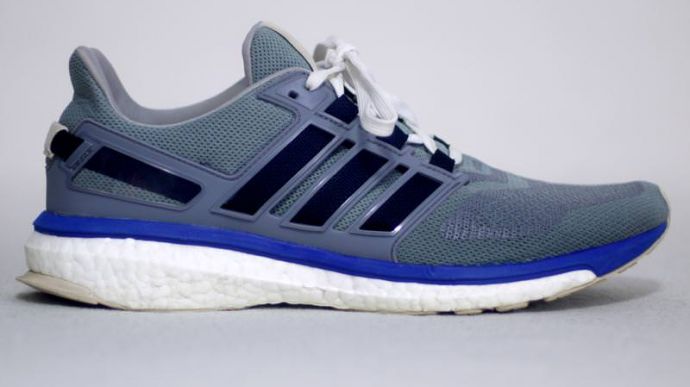 The Adidas Energy Boost 3 is a pricey daily neutral trainer with a springy ride designed with good looks on a stable platform. Several design choices could make this shoe tough to handle for long runs.
WHERE TO BUY
LOWEST PRICE
$160
SHOE INFO
Adidas
Brand
Energy Boost 3
Model
Cushioning
Type
11 oz. (312 gr.)
Weight
160 US$
MSRP
10 mm
Heel Drop
Energy Boost
Previous model
WHO IS IT FOR
Runners who stick to the Adidas brand and want more stability in a neutral shoe without adding any arch support might like this shoe. Those who put in a low to medium amount of weekly miles (5-25mi/8-40km) would enjoy this shoe the most.
Help me choose

Adidas categorizes this shoe as a neutral trainer with a 31.5 mm heel stack height and a 21.5 mm forefoot stack height which gives you a 10mm differential. That all makes sense.

What doesn’t seem to make sense is Adidas calls the shoe “lightweight”. At 11 ounces in size 9, it’s a stretch to call them lightweight.

The Saucony Freedom ISO, Under Armour Velociti, Skechers Gomeb Razor, and Nike LunarGlide shoes are all daily trainers that come in lighter.

The extra weight on the Energy Boost 3 shoes might be worth it since you’re getting boost foam, 3D molded FITPANEL overlays, a TORSION SYSTEM, and a STRETCHWEB rubber outsole.

The Ultra Boost shoes are a tad pricer and feature a more durable Primeknit upper, while the Supernova Glides are a tad cheaper and lack the boost foam. This makes the Energy Boost line seem just right in the field of neutral daily trainers from Adidas.

I previously tested the Ultra Boost ST shoes from Adidas, so I was expecting the Energy Boost shoes to be peppier and lighter with the same springy boost foam.

Judging by the similar designs, I assumed the fit would feel about the same with maybe more flexibility. Lacing up for the first time revealed that the Energy Boost shoes indeed feel similar to the Ultra Boost shoes, possibly less flexible though?

It seemed the midsole design was stiffer, and the heel counter was beefier than the Ultra Boost ST shoes. That was odd.

The first run felt pretty good in these shoes, so I was eager to see how the shoes would do as I ran up to 50 miles over the next several days.

Two adjectives: springy and stiff. That’s what makes the sole on the Energy Boost shoes different.

The springy response comes from the Adidas Boost foam which has industry leading performance in energy return, consistent response in cold temperatures, and long term durability.

Only a few other foams out there rival the Boost foam, such as EVERUN foam from Saucony. You get a lot of foam, almost 32 mm in the heel, which should not bottom out for even the most demanding runners.

This foam is also unlikely to have long term deformation problems that you might have experienced with standard EVA foam.

There still is a bit of EVA foam around the rim of the midsole to “keep the foot in a neutral plane” according to Adidas.

I consider Boost foam the main selling point of Adidas shoes, and the rest of the shoe as a supporting role to fill out the details.

Filling out the details on the bottom of the sole is a relatively thin outsole that’s just a few mm thick. It resembles an evenly spaced grid of squares with exposed foam in between the patches of rubber.

What’s interesting is that Adidas put more rubber around the edges of the outsole and left the center of the shoe with the largest areas of exposed foam.

This arrangement of rubber is something common to many Adidas shoes, but it’s pretty pronounced in the Energy Boost line.

It was hard to get a feel for real long term durability over 50 miles of testing, but I’m almost certain most runners will wear through the center of the outsole rubber much sooner than the edges of the outsole.

For those of you who wear through the sides of the outsole first, this might be a good choice. I just described how the boost foam is springy, and that the outsole doesn’t affect the bounce/stiffness of the ride, so where is the stiffness from?

Plastic runners (no, not plastic toys that look like runners, strips of plastic running the length of the sole).

These plastic runners originate from the center of the shoe, where there’s a large plate of plastic to reduce torsion. Adidas calls it the “TORSION® SYSTEM”.

This torsion prevention plate is pretty common, where Skechers GoMeb shoes use a bit of Delrin to achieve this torsion resistance.

Adidas went a little further and extended two plastic runners along the outer sides of the outsole and one runner that extends back towards the medial side of the outsole.

Sort of how iron rebar increases tension resistance in concrete, these plastic runners make it harder to bend the shoe into itself.

This means when you toe off, the heel of the shoe doesn’t flex upward with your feet. Rather, it pulls itself to stay parallel with the ground and forefoot of the shoe.

I think this is a little restrictive for what Adidas is calling a neutral shoe. Adidas also has a medial stability post made of that plastic that connects to the medial runner in the outsole.

This seems to give you a little more support if you land off center with your feet and prevents your foot from rolling inward.

Combine the EVA rim to promote a stable ride, an aggressive TORSION® SYSTEM to prevent twisting and flexing, and the medial stability post and you basically end up with a stability shoe without arch support.

This is the part of the shoe that will make or break it for you. If you’re already ok with the sole, like the looks, don’t run more than 20 miles a week, and have $160 to toss at these shoes, buy these shoes and read no more.

I see you’re still reading, let me tell you my thoughts on the upper. The raw design of the upper calls out to those looking for a fashionable athletic shoe.

Wide flat style laces, thick plastic overlays with integrated fabric bands looping into the laces, plastic windows, and rubberized printed patterns tell me that shoes may have spent more time in the design room than on the road.

I’ve seen some shoes nail it in design and function (see the Saucony Freedom ISO shoes), but I don’t think the upper design on the Energy Boost 3s complement the function in the rest of the shoe.

The material in the upper is fairly good breathable and flexible mesh that smoothly integrates into the other areas of the shoe. Adidas calls this their “techfit® upper”.

I’m curious though why they didn’t use Primeknit on this shoe. Maybe they’re saving it for future versions of the shoe. The Energy Boost 3 shoes start to lose momentum when you look at the rest of the upper.

The plastic overlays that form the Adidas logo on both the lateral and medial side of the upper unevenly compress your feet.

This lacing system can cause an uncomfortable ride at the edges of the overlays for those who like a tight fit. Adidas seemed to have done a better job with these plastic overlays on their Ultra Boost line of shoes.

The external heel counter on these shoes is pretty solid and well designed. It’s durable and strong enough such that you can jam your feet into these shoes without untying them and still have the heel hold shape.

What’s odd is the choice of putting clear plastic over the band that holds part of the heel together. This plastic window just fills with condensed sweat, and does not add much strength to the shoe.

Following the heel counter to the back and you get what appears to be a pleasant pull tab to help you put the shoes on, but you find your fingers can’t fit in the loop and the pull tab is there just so Adidas can print the words “energy” on it. Zero functionality right there.

The toebox seemed alright, but gave me problems after a few runs. The problem stems from the design choice to simplify the look of the toebox.

Nearly all shoes need a way to keep the toebox from collapsing at the tip of the toes, so most shoes put a stiffer overlay around the rim of the toebox.

This is visible as a darker band around the rim of Adidas Ultra Boost ST shoes combined with a thin internal support material, and as a sewn on stiff overlay on the Brooks Launch 4.

The Adidas Energy Boost 3 shoes have no visible overlay or reinforced material around the toe, yet they still hold their shape. This is done with an internal overlay (maybe underlay is a better term).

Skechers uses this technique on their GoMeb line of shoes with good results. Adidas got it wrong in the Energy Boost 3s.

The underlay is too thick and cuts off too sharply when it ends against the side of your pinkie toe and big toe. It also is less smooth than the surrounding fabric which causes it to catch your toes.

Unless you’re wearing thick socks or have narrow feet, this will cause blistering. I can understand blistering on racing shoes like the Brooks Hyperion, or on cheaper shoes like those made for Walmart, but not on $160 daily trainers.

You can literally put a bandaid on the issue by placing a bandaid or piece of tape over the edge to reduce the hard transition which is what I did to get through runs over 10 miles. Overall, this problem is bothersome enough to prevent me from recommending the shoe

The Adidas Energy Boost 3 shoe has a good set of solid features for runners who want a stable and springy shoe with eye catching looks. Boost foam is the biggest selling point to this shoe, and the looks don’t hurt either.

The unfortunate chafing in the toebox, uncomfortable lacing system and high price prevents me from recommending this shoe to pretty much anyone.

I understand this shoe has relatively positive reviews from the running community, but I think you can get an even better shoe without dropping as much cash.

We thank the nice people at Running Warehouse for sending us a pair of Energy Boost 3 to test. This did not influence the outcome of the review, written after running more than 50 miles in them.