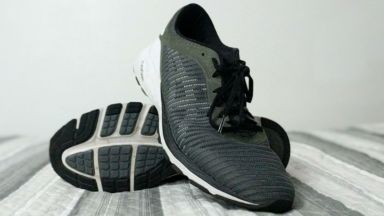 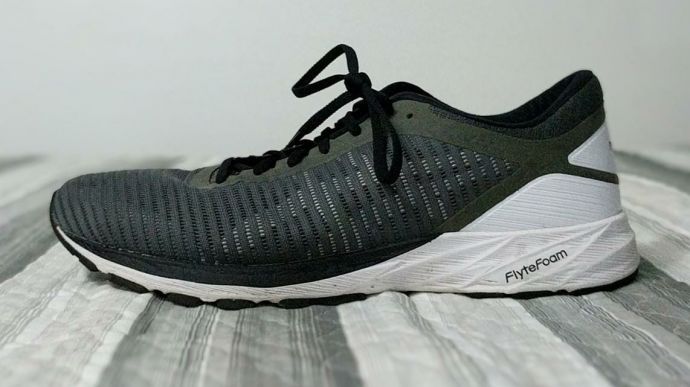 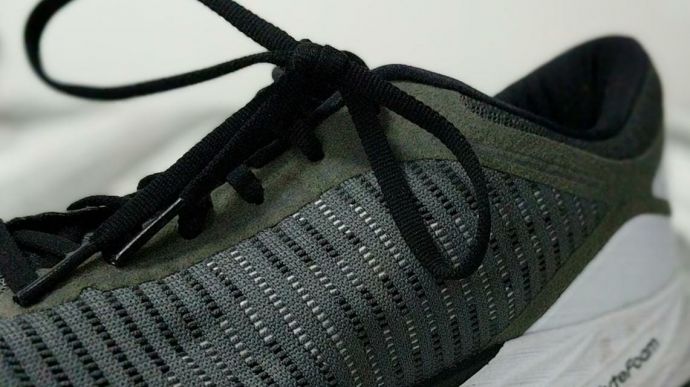 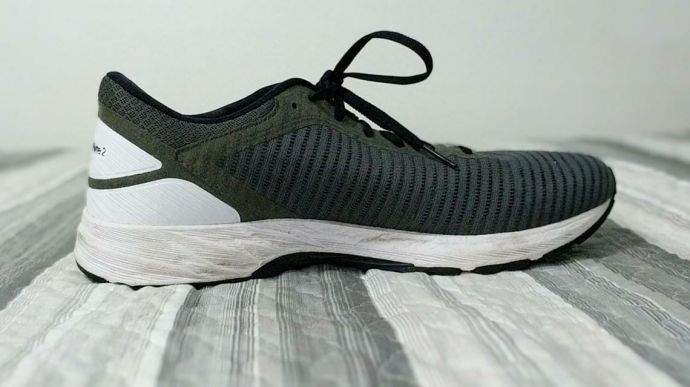 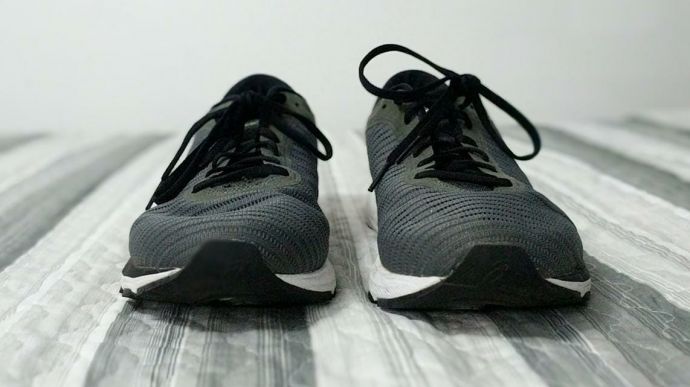 The DynaFlyte 2 is a great shoe that improves on the original DyaFlyte shoe’s goal of making a lightweight cushioned shoe in a streamlined design.
WHERE TO BUY
LOWEST PRICE
$69
SHOE INFO
Asics
Brand
Dynaflyte 2
Model
Lightweight
Type
9.20 oz. (261 gr.)
Weight
130 US$
MSRP
8 mm
Heel Drop
DynaFlyte
Previous model
WHO IS IT FOR
Overall, this shoe is good on the roads for neutral to under pronating runners. Similar shoes in the neutral daily trainer category would be the Nike Air Zoom Vomero and the Adidas Energy Boost 3.
Help me choose

Asics categorizes this shoe as a neutral trainer with a 19mm heel stack height and an 11 mm forefoot stack height which gives you an 8mm drop.

Although a 19mm heel is pretty decent for a cushioned shoe, you can easily go 20+mm on some of the Hoka and Altra brand shoes.

What’s nice about the 19mm heel and 11 forefoot stack heights is that you end up with a genuinely light shoe at 7.2 ounces. Adidas has a cushioned casual looking shoe that they also claim to be lightweight, but it’s at 11 ounces.

If a cushioned ride is not your thing, you should turn around and check out the Saucony Freedom ISO, Under Armour Velociti, Skechers Gomeb Razor, or Nike LunarGlide shoes. If you want more cushioning, check out the Asics GEL-Nimbus line of shoes.

DynaFlyte started out as a new line of shoes by Asics to combine cushioning and lightweight attributes into one shoe.

It’s pretty much the goal of every running shoe manufacturer, where each manufacturer comes up with their own metric to measure “cushioned” and “light”, and then they say they’ve done it! Asics has some numbers to backup their claims.

Their FlyteFoam is 76% better at absorbing shock and weighs 55% less than regular EVA foam. It’s fairly easy to beat EVA foam nowadays, so it’s good to see Asics did it with pretty measureable margins.

The predecessor was a little heavier at 9.3 ounces, a little pricier at $140, and a little flashier with neon color options pretty much standard. Now, it’s 7.2 ounces, $130, and comes in a much more subdued color palette.

I unboxed the grey box from Asics to reveal some equally gray shoes. Not a complaint, since many modern running shoes are often too flashy. The Mizuno Wave Shadow, Skechers GOmeb Speed 4, and pretty much all Nike Free shoes come to mind.

Lacing up the Asic shoes was very standard. I liked the flat laces and the smooth eyelets that the laces passed through.

The whole shoe felt like it was sized pretty well before I went on my first run, but Asics recommends testing a half size down since they found the shoe runs long.

I tried to learn more about what makes this FlyteFoam besides the usual marketing gibberish, but didn’t find much.

I was hoping to find that it’s some variant of TPU foam that Adidas, Saucony and New Balance are all making since that type of foam is scientifically awesome (check out the Adidas Ultra Boost review or the Saucony Freedom Iso review to learn more).

Even though I couldn’t find much scientific data on the foam, I can say it does feel cushioned and does feel light.

The whole running experience from the sole feels very attenuated and in control. The combination of their FlyteFoam, Rearfoot GEL system, SPEVAFOAM 45 platform, and ORTHOLITE X-40 insole come together and put a stable and moderately cushioned platform beneath your feet.

I personally like a little more flex in shoes, so that’s really my only functional complaint about the DynaFlyte 2s. The rest of my complaints about the sole are about the aesthetics.

On the side of the midsole is the simple design of parallel lines in sections which double as a functional way of preventing the foam from looking like it developed wrinkles after a few runs.

The midsole side also has a black painted line under the forefoot that can get marked up.

This is something that pretty much every shoe has since it makes the forefoot stack look less pronounced, but I wish shoe companies would stop just painting it and would switch to a colored foam or fabric since those wouldn’t show wear as much.

Last on the sole is the outsole which follows Asics’ standard layout of several rubber patches separated along the length by a thin channel of foam, and a large exposed patch of foam below the heel and midfoot.

The forefoot of the outsole has a few grooves in it for flexing, and that covers most of the design.

The real important part about the outsole is the “Trussic System” which is a plate of plastic running beneath the inner side of the shoe that reduces twisting in the shoe.

This is what keeps the shoe stiff and stable. The other important note on the outsole is the use of “Asics High Abrasion Resistant Rubber” AHAR.

This is one of the few shoe tech terms I like, since it describes the product in an objective style. As you guessed, this type of rubber resists abrasion and wear better than regular rubber which increases the life of your shoes.

You know what I really like about these shoes? I mean, it’s a little easy to guess here since I’m writing in the “Upper Info” section of the review, but I’ll pretend I’m surprising you anyway.

I really like the design of the upper. Asics is rebelling against the flashy running culture a bit with the color choices on this shoe, and more importantly, they’re practically HIDING their logo. Who does that?!

Nike, Saucony, and many others do pretty much the opposite by making their logos out of reflective material. Asics put their arches below a layer of meshed fabric for a subtle mirage of a logo on the side of the shoe.

But most of us are here to run in the shoes, and not to wear the shoes around for style points. The fabric on the upper works great at staying breathable on runs and not staying stinky after runs thanks to the “ComforDry Sockliner” technology.

If you’re a picky runner, you should know that the fabric on the sockliner around the heel starts to pill after a dozen or so miles.

Complementing the smooth upper fabric are the discrete eyelets and flat laces that hide the strength of the lacing system into something that looks sleek.

The fit of the lacing system is pretty good, but could be made better if Asics integrated the tongue into the side of the shoe like what Saucony did with the Freedom Iso.

I ended up testing these shoes for well over our standard 50 miles, so I’m pretty confident in saying that these shoes are a great choice for a standard cushioned running shoe.

We purchased a pair of Asics Dynaflyte 2 from runningwarehouse using our own money. This did not influence the outcome of this review, written after running more than 50 miles in them.

Visit ShopAmazon.com
This page contains affiliate links. As an Amazon Associate I earn from qualifying purchases.
WHERE TO BUY
LOWEST PRICE
$69
AVAILABLE ON SALE:Previous model $69