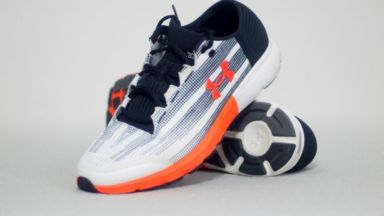 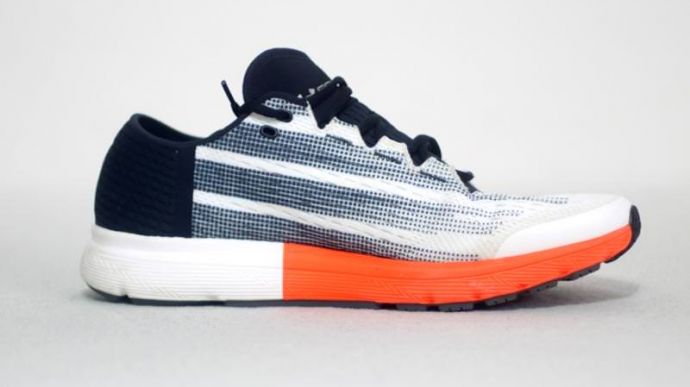 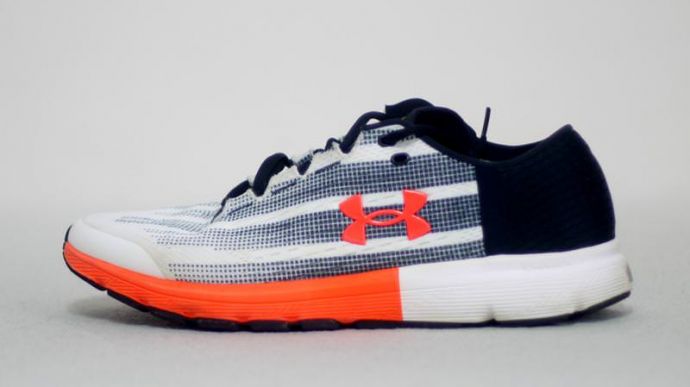 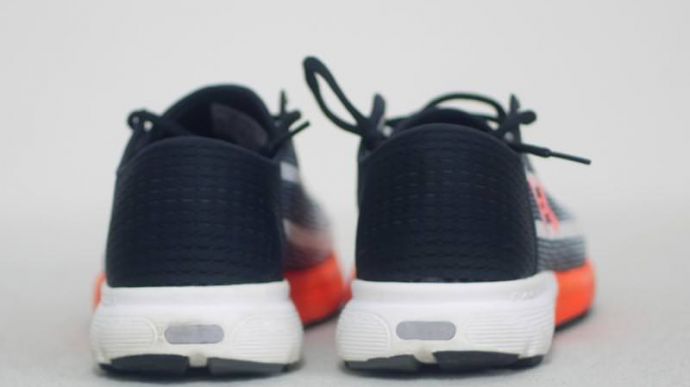 The Under Armour SpeedForm Velociti is a neutral daily trainer featuring smooth fitting upper and a bouncy midsole.

This shoe seem well suited for speedy runs, but fundamental flaws with the midsole design sneak in to make this shoe a poor choice for runners.
WHERE TO BUY
LOWEST PRICE
$91
SHOE INFO
Under Armour
Brand
Velociti
Model
Lightweight
Type
8 oz. (227 gr.)
Weight
109.99 US$
MSRP
8 mm
Heel Drop
Jan / 2017
Release Date
WHO IS IT FOR
Under Armour targets the SpeedForm Velociti at runners looking for a bouncy, fast daily trainer with modern styling. This shoe is best for low mileage newer runners.
Help me choose

I’ve tested three other SpeedForm shoes by Under Armour (the Apollos, the Slingrides, and the Gemini 2s), and this is the second UA shoe I’ve tested that was designed for speed.

It looks like Under Armour is challenging their already fast feeling Apollo shoes with this Velociti line.

I see the vision Under Armour has for their SpeedForm shoes. They want an aesthetically simple upper with perfect comfort, combined with a shoe that will not hold you back when you test your speed.

Under Armour Velociti – Lateral Side

The SpeedForm Velociti targets this hard by diving deep into the speed category. They want speed so badly in this shoe that they named this specific line “Velociti” after the word “Velocity”.

It’s all marketing until we look at the tech since velocity is just a speed + direction measurement which makes the SpeedForm Velociti name sound a little repetitive.

So, what makes the Velociti shoes speedy? Under Armour picked lightweight materials and built them into a reasonable 8 ounce design. However, this is 1.5 ounces heavier than the 6.5 ounce Apollos.

It’s a fair trade off for better durability so you can use the Velociti shoes as daily trainers rather than specialized tempo running shoes.

The sole is similar to the Gemini 2s in stack heights, and also features the same 8mm drop, so I would recommend trying both the Gemini 2s and Velociti shoes together.

The fit is pretty similar as well, where there is no special Nike Flywire-like ropes or plastic Adidas Ultra Boost overlays to hold your feet in the upper. The laces just weave into the upper of the shoe and provide a nice springy hold on your feet.

Considering that I enjoyed running in the Gemini 2s and that I like fast, lightweight stuff, I knew I would like the Velociti shoes. Even the first quick 3 mile run I did in the shoes felt pretty nice.

It can only get better from there, right? (Spoilers: Vader is Luke’s father, and no, it didn’t get better for the Velociti shoes).

Under Armour Velociti – Medial Side

Everything but this paragraph is basically filler for the review. This is where I tell you exactly what killed this shoe.

I debated where to put this complaint in the upper or the sole section since the biggest problem with the shoe is where those two categories meet.

The perimeter of the toebox on the topsole develops a very pronounced ridge that presses into your toes. It’s bad. I was getting blisters and sore spots even while wearing socks.

Now you may have a pair to try on right now and you’ll be saying “Frank, I don’t notice what you’re talking about”! That’s because this problem took 20-30 miles to develop.

The topsole had enough padding when I started testing to cover up these seams and ridges, however, that padding compressed over the course of several runs and the ridges came out.

I think this is a fundamental design issue with the shoe since the ridges feel slightly different in the left and right pair, making me think that this is an alignment issue combined with a poor design choice.

In the event you’re still reading this review and considering the shoe, there is some hope for you. You can slip in a pair of insoles to smooth out some of the ridge problems.

Under Armour Velociti – Inside

The heel will feel funny since your feet lifted up a few mm, but you’ll survive. Although I’m disappointed in this ridge problem, I can’t give up on telling you about the rest of the shoe.

The remaining sole is decent, using a springy feeling foam with ample cushioning for daily use. I’d put it a tier below Saucony’s EVERUN and Adidas’ Boost foam.

The outsole uses the smart industry standard of durable high carbon rubber at the tip and heel to improve durability, and blown rubber beneath the body of your foot for extra cushioning.

The rubber layout on the outsole reminds me a bit of the TRI-FLEX layout Saucony uses on their shoes, with spaced out rows of rubber lugs for traction and flexibility.

The heel of the Velociti shoes has a large patch of open foam surrounded by arcs of circular rubber. There’s also a big patch of exposed foam beneath the center of the shoe, which is probably a weight saving choice by Under Armour.

This shoe would probably do just fine on the road, and maybe even trail. I just did most of my mileage on the treadmill since I had to exchange this pair for a different shoe whenever my toes started to give up.

Now if it wasn’t for that problem in the toebox, I’d say this midsole was alright.

It’s worth repeating this from previous reviews that Under Armour has a massive skill set in producing garments and they apply this knowledge to their athletic gear.

The seamless transition of the upper around the heel into the topsole beneath the heel shows off this manufacturing magic.

Other hints of unconventional and smart manufacturing techniques are the Bemis tape connections near the heel, and the neoprene-like upper tongue. Bemis tape is a tape used primarily in the garment industry to bond together fabrics.

Under Armour has some really great shoe ingredients that they pulled from their garment pantry. I’m waiting for other companies to follow.

Their heel design is usually hit or miss, where the trim along the top of the upper around the heel uncomfortably bumps into your feet, or flawlessly accents the shoe and blends right into your socks.

This heel in the Velociti shoes does the latter, and really shows you how smooth looking a heel can be while still providing durability and comfort.

I have to come back to the toebox for a bit. Under Armour added a stiff overlay to the outer of the toe box to give shape and durability. I think this overlay is too stiff though.

My big toes would start to wander over to the sides of the shoe and rub against this stiff transition area in the toebox and start to chafe a little.

Other than the described issues, the upper is really fantastic. It’s breathable, has hardly any features that can get snagged/break off, and it looks pretty cool.

My simple conclusion is don’t buy this shoe. Even if Under Armour says they found a way to fix the defect in the toebox, you don’t know until 20-30 miles later if your pair actually has the fix.

That kind of risk at over $100 for a shoe that has similar competitors is not worth taking. Stick with the UA Gemini, or wander over to other brands and try the Saucony Freedom ISO or Nike Pegasus shoes.

I was hoping UA had a snazzy looking fast and comfortable shoe, but looks like I’ll have to wait for the Velociti 2s for that.

We thank the nice people at Under Armour for sending us a pair of Velociti to test. This did not influence the outcome of the review, written after running more than 50 miles in them.

Visit ShopRunningWarehouse.Com
This page contains affiliate links. As an Amazon Associate I earn from qualifying purchases.
WHERE TO BUY
LOWEST PRICE
$91

Similar shoes to Under Armour Velociti