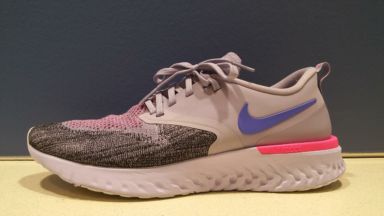 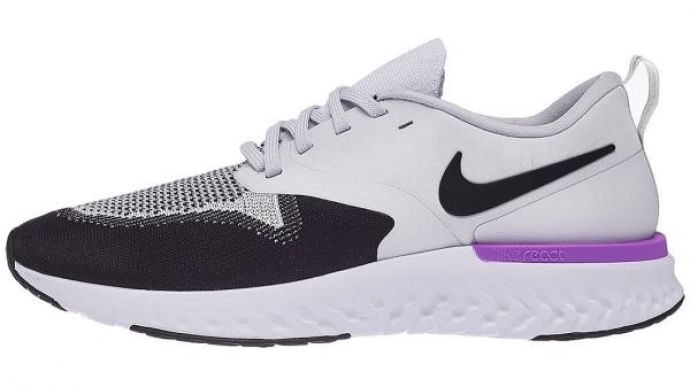 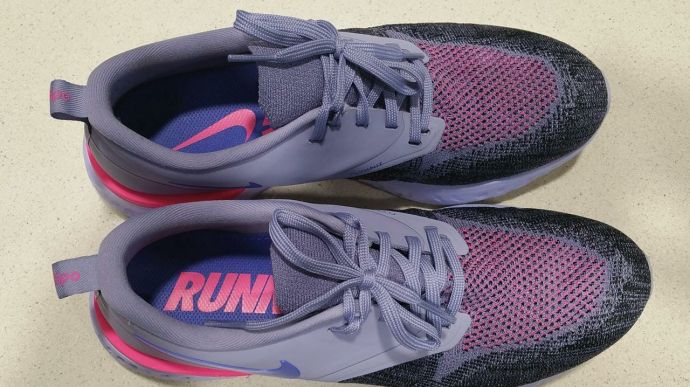 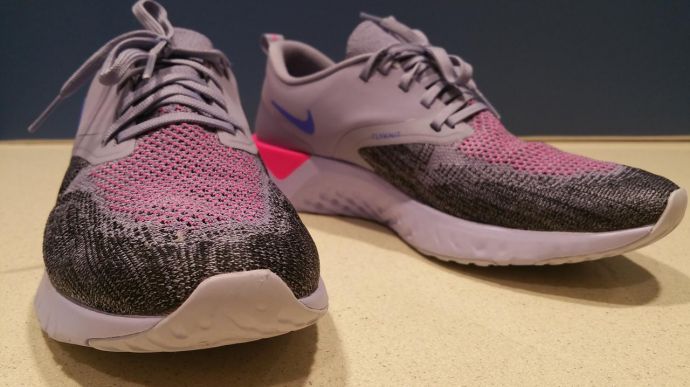 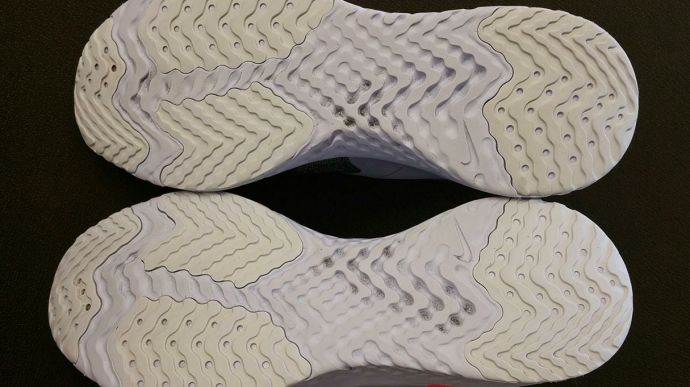 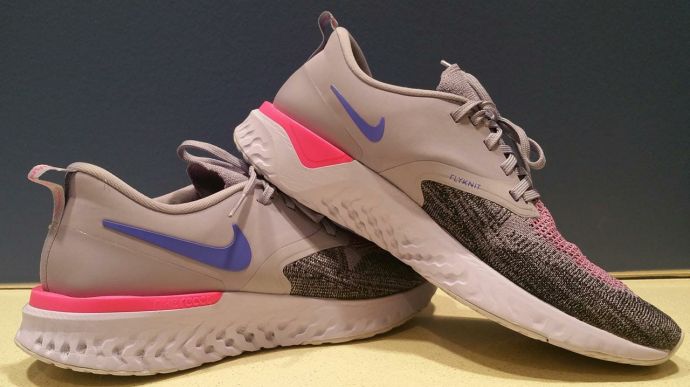 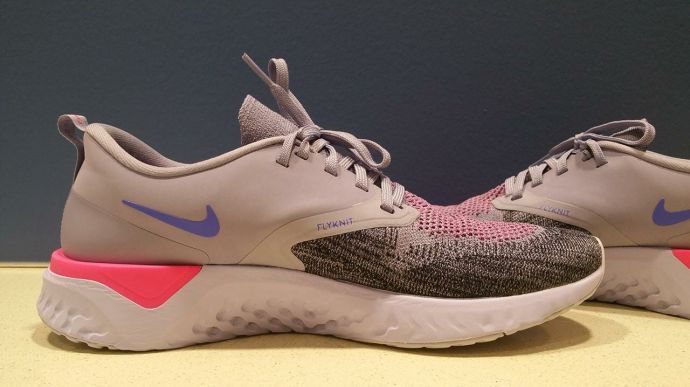 The Nike Odyssey React Flyknit 2 is a mouthful to say and is equally packed with potential, offering light stability by way of a med-high arch and med-supportive upper, with a touch of flexibility in the forefoot and a snug, low-volume fit.

When tied with heel-lock lacing, this $120 shoe holds the foot secure with no pinching or excess movement from the flexibly-soft fit; React midsole material does the rest to offer a soft yet light and springy ride.
WHERE TO BUY
LOWEST PRICE
$120
SHOE INFO
Nike
Brand
Odyssey React 2 Flyknit
Model
Stability
Type
8.2 oz. (232 gr.)
Weight
120 US$
MSRP
10 mm
Heel Drop
Odyssey React
Previous model
WHO IS IT FOR
Those with low-moderate support needs and med-high arches (or can handle this in a shoe) will enjoy taking Odyssey React out for cushioned long runs and recovery runs; also wear it for up-tempo efforts and long-distance races.
Help me choose

This is not your typical stability shoe, yet it works for me if I use the very top holes to tie it using heel-lock lacing.

With last year’s Odyssey on one foot and Odyssey 2 on the other, at first it feels like the old model has a more secure mid-foot. But after lock-lace tying Odyssey 2 and running a few miles I no longer notice a difference.

The biggest problem with the new upper design is the thin tongue. A careful balance must be found between a secure hold and laces digging into the top of my foot.

I don’t list the mid-grade heel counter as a “con” because the med-high arch makes up for it to counter my over-pronation caused by the loose ligaments in my feet (similar to the benefit from my custom inserts from Dr. Paul Coffin).

React midsole was designed to compete heavily against adidas Boost foam, and the internet is bursting with comparisons of the two.

Bottom line for me is that Nike React is lighter; adidas Boost has more substance to it: both offer excellent cushion and responsiveness.

I prefer a thin layer of Boost foam, such as in adidas Adizero Tempo 9 for long distance racing, but Odyssey is a favorite for training runs.

See my review of Odyssey React for a full comparison of React midsole with adidas Boost, Saucony EVERUN(TM), Nike’s Lunarlon, and the older Brooks DNA. (In 2019 there’s DNA Loft, which is more plush than before, and than React—but heavier).

Odyssey React feels a bit like Pegasus 35 in the way it seems to propel you forward, but it doesn’t have the Zoom Air pocket.

First thing, if you’re borderline on sizes, go up half size for this one. It’s narrow, with a snug fit in the forefoot, and the length fits short. I forgot that I had to go up last year, too, and had to exchange.

Walking around in the long-awaited Odyssey 2, I first noted slight movement in the heel, which happens for me when I have to go up in size.

Have no fear, narrow heels, heel-lock tying holds my heel steady, but my biggest complaint about the shoe is that the laces can then “dig in” to my foot since the tongue is quite thin.

Right off the bat I loved the smooth, flexible fit of Odyssey 2’s forefoot. Testing them took a little figuring out, but I ended up loving them.

These shoes definitely have higher arches than any other stability shoe I have run in and work best for a medium-high arch.

My arch is medium to medium-low, and my feet start to hurt if I wear Odyssey React all day for casual use. But I like the light, cushioned, responsiveness enough to still want to run in them.

After running 21 miles in them (over 3 days), my feet, knees, and heels started complaining in their tell-tale ways indicating low support; I was ready to blame the shoe’s less-than-robust heel counter—the support that holds a heel upright.

At first I thought I could tie with heel-lock-lacing between the 2nd and 3rd holes (as I do in ASICS GT-2000 7) instead of using the top holes.

It felt great and secure enough, but then my heel started hurting, a warning sign for me. I changed up the lacing, using the top loop for the heel-lock, and this brought Odyssey 2 back into my favor.

After my first run in the shoe, I told a friend that I thought I’d be ranking it pretty high, mainly because I love the change to the forefoot upper.

As it molds to my foot much better—but then texted her after the next run to say I was down to 7 stars because of the lackluster heel counter.

The biggest benefit for me upon later testing was to switch my lock lacing from the second two holes, to the top two, as this gave me the secure fit that I needed.

React foam—what an intriguing technology! It is soft — I love the cushion for long runs — and also springy; how can it be BOTH?! It’s a touch “mushy” for hard-core speedwork but otherwise holds its own as an all-around trainer.

A TPU heel clip borders the top of the midsole around the heel, to bring some stability to the shoe and help offset the “squishy” feel of the React foam, to keep the foot from wobbling.

The injection-molded clip includes a wedge on the medial Odyssey that is not found in the Neutral version of this shoe, Epic React.

React foam is covered by thin rubber patches on the high-abrasion areas of the tip and heel of the shoe, as well as two segmented patches beneath the forefoot.

I am even more impressed with this sole unit than I was last year, truly preferring its lightweight comfort for long runs. The shoe again sports a 10 mm. drop.

The change in Odyssey 2 came by way of a Flyknit upper replacing the jacquard-weave, neoprene combo that this shoe debuted with last year.

I thought this would make it less secure; I was right unless I make loops at the top of the lacing, to send the strings through and lock in my heel—a shoe hack that evens out the increased flexibility of the new upper.

I found that the move not only pulls in the heel but increases the hold on my midfoot. If you don’t need the extra security, tie the shoe normally.

Either way, you might enjoy the snug flexibility of the forefoot that moves back into a plastic-wrapped heel to offer some structure. Below this is an internal heel counter that is not remarkable. But it works.

So how can I knock it? The heel counter’s connection to the bright heel clip of the sole unit seems to keep it anchored enough to do its job of directing heel motion forward, to counter any horizontal tendency.

The Flyknit is very breathable, with small holes in the top weave of the toebox and a thin inner sleeve in place of a traditional tongue—the downside to this being that laces can dig in.

A super-soft lip around the heel angles back slightly to cup the heel and lock it in place; a thin sock liner offers a touch of padding.

The bright heel clip might catch a driver’s eye, but Nike did not include reflective patches on the back of Odyssey 2 as they did last year, which is disappointing.

In Odyssey React Flyknit 2, Nike made a more-stable version of the Epic React Flyknit without adding much weight or taking away the flexible comfort of the Flyknit.

That said, it’s NOT YOUR TYPICAL STABILITY SHOE, which means that it’ll meet the needs of some while making others question my sanity, with the high ranking.

If you want some stability and also a light shoe, some flexibility with some structure to the heel and midfoot—and you can handle med-high arches in a shoe—give this one a look.

But at the end I have to put the experience of running in the shoe ahead the industry’s expectations: it’s supportive, very comfortable, well cushioned, and didn’t spark injury, on multiple runs 9 to 19 miles long, some of them back to back days.

I LOVE THIS SHOE FOR LONG RUNS!

Sometimes I have to retie the laces once or twice to keep them from digging through the thin tongue, but once the tension is just right, it’s smooth sailing on Odyssey through the odyssey that is every training week and long run.

Just examining the shoe, it seems too flexible, like it won’t hold up for me, but after putting over 120 miles on these in the last three weeks, my feet and knees feel great! That speaks louder than fancy lingo and traditional expectations.

We purchased a pair of Nike Odyssey React 2 Flyknit from runningwarehouse using our own money. This did not influence the outcome of this review, written after running more than 50 miles in them.