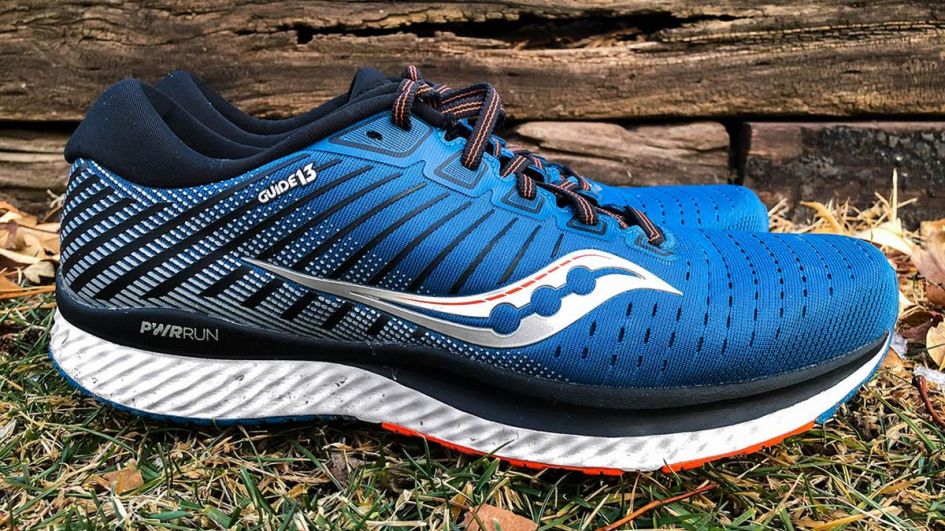 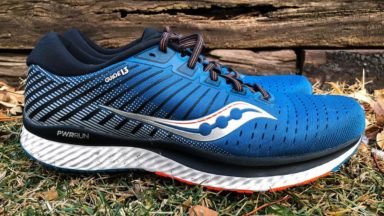 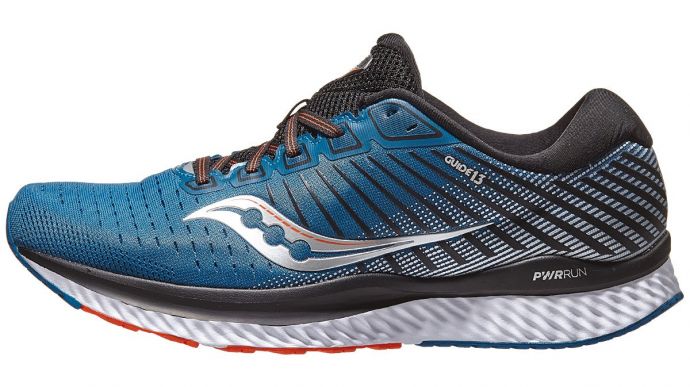 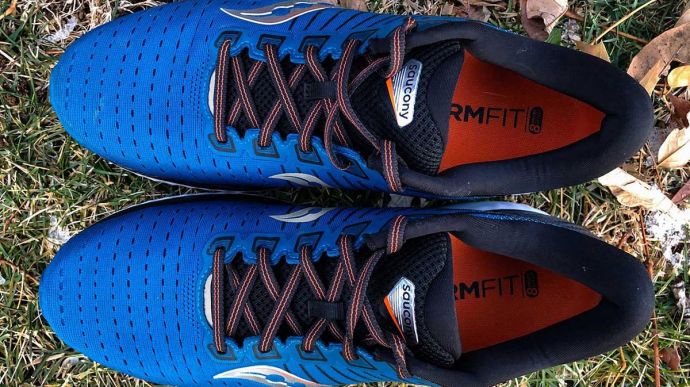 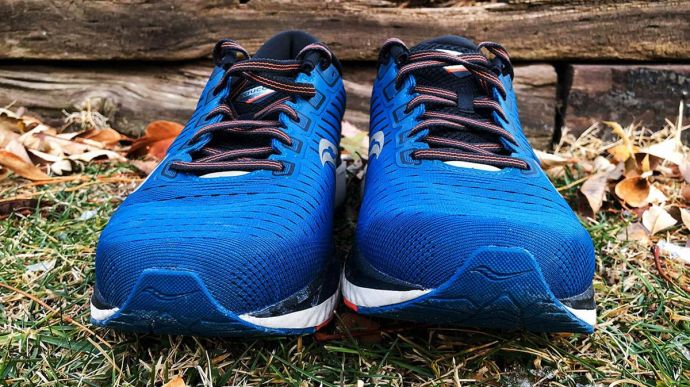 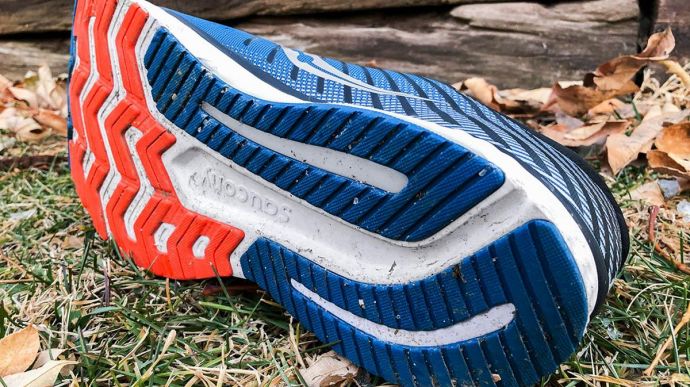 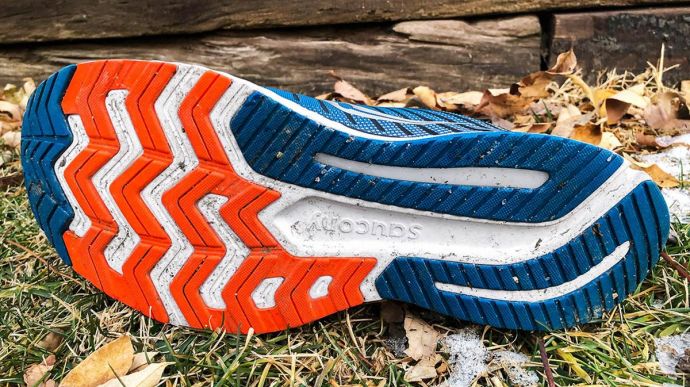 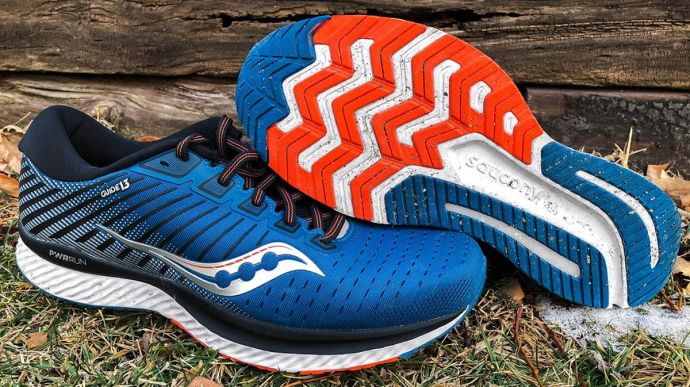 The redesigned and rebuilt Saucony Guide 13 is an exceptional everyday moderate stability trainer. The additions of PWRRUN cushioning and a new upper turned a great stability trainer into one of the best.
WHERE TO BUY
LOWEST PRICE
$42
SHOE INFO
Saucony
Brand
Guide 13
Model
Stability
Type
10.2 oz. (289 gr.)
Weight
120 US$
MSRP
8 mm
Heel Drop
Saucony Guide
Family
Guide ISO 2
Previous model
WHO IS IT FOR
I recommend the Saucony Guide 13 to those looking for a mid stability trainer for either a half or full marathon.
Help me choose

The saying “out with the old, in with the new” fits perfectly for the new Saucony Guide 13. Saucony is a company that listens to feedback and makes changes, even big changes.

The Saucony Guide 13 is one of the first in line to receive an almost complete reconstruction, with new materials and technologies.

The Guide 13 is the thirtieth edition of the shoe. The last two editions were known as ISO and ISO 2 since Saucony used the ISOFit upper on them, but have since changed the design of the upper.

It is the mid stability offering from Saucony and falls between the Liberty and Omni.

The guides retail for $120, which puts them in competition with Asics GT-2000, Nike Zoom Structures and the New Balance 860.

When I opened the box for the first time I immediately thought it was a different shoe than the Guides. From top to bottom the shoe looked different from the previous edition.

The fade from black and gray in the heel to the blue was smooth. The accents of orange in the laces, logos, and bottoms of the shoe add perfect pop in appeal. It looks fast and appeals to the eye.

The sole felt firmer than expected when I slipped them on for the first time.

The inside of the shoe was plush with more cushioning around the heel collar and throughout the upper than previous editions, My first run out of the box was a relaxed 6 miles outside.

It was a different ride than the Guide ISO 2. The sole unit was lighter yet responsive along with a more secure fitting upper.

The new TPU guidance frame was noticeable on the run and the cushioning around the upper was slightly overbearing.

On the other hand, the sole unit provided that springy natural ride I have come to expect from a Saucony offering.

In my experience, PWRRUN is a lighter and more responsive material.

If you are a stability runner you have probably noticed in the last few years running brands have changed their stability systems.

Brooks expanded their guiderails, Hoka has developed the J Frame, while Saucony has historically stayed with the traditional dual-density medial post until now.

Gone is the dual-density medial post and in comes a TPU guidance frame. It serves the purpose of a medial post in providing you with the stability you need.

The TPU guidance frame is an L shaped piece of thermoplastic polyurethane that sits between the heel and arch on the medial side of the foot.

It wraps around to the bottom of the foot. This was developed to provide the shoe with more structure and support along with durability.

The TPU guidance frame will be used in Saucony’s other stability offerings in the future. It was noticeable on my first 2 runs which meant there will be an adjustment period for longtime Guide runners.

The crystal rubber is thinner without losing any durability. The same tri flex design is still prominent in the outsole. The outsole handled the different weather conditions I took them out on while having enough flexibility.

Along with the sole unit, the upper part of the Guide 13 has undergone some major updates. The ISOFit technology was divisive among the Saucony faithful so much so Saucony decided to move on without it.

Some runners couldn’t seem to get a good fit no matter how many times they tied their shoes, while others felt like it was a dream fit.

I fell into the latter camp, so I was skeptical going into this review of the Guide 13s without the ISOFit.

Although the ISOFit is gone, Saucony kept all the effective parts around it. The ISOFit lacing components caused many runners problems, so they were eliminated.

The booty-like upper, which I have come to expect from Saucony, is still there, both adaptable and flexible.

This was aided by the updated engineered jacquard mesh they use for the upper, which is more durable than previous versions. However, a downside I noticed was a lack of breathability in the upper.

The tailored fit I have felt in both the last versions of Omni and Hurricane continues in the Guide 13. This tailored fit starts in the heel and continues throughout the length of the shoe.

Compared with the Guide ISO 2, the Guide 13 is a better built durable upper. The toe cap is on the inside of the shoe providing more structure in the forefoot area of the upper.

It is a three layer cushioning system that cradles your feet with a secure fit. The secure fit adds to the stability of the shoe because it helps lock your feet in place.

The new upper and the FORMFIT complement each other in providing a secure and adaptable fit while you run.

“Sometimes when you fall in love with a shoe you get disappointed with the next edition because of all the major ‘upgrades’.

Last year I gave the Guide Iso 2 a perfect 5 star review stating “The Saucony Guide Iso 2 is an exceptional mid cushioned stability daily trainer, fit for any type of run.”

While this is still true, the Guide 13 is unequivalently a better overall trainer.

From the moment you slip them on you notice a slimmer more tailored fit from heel to toe in the Guide 13. This may bother some runners with wider feet, but for me, it provided an ideal fit.

The newly reconstructed sole unit made with PWRRUN foam was lighter and more responsive than EVERUN cushioning.

At the same time, the sole unit was also bouncier. The new TPU guidance frame resulted in added stability.

This combined with the cushioning made for an effortless transition from heel/midfoot to toe off.

It took a couple of runs to get used to the feel of the new sole unit particularly the TPU guidance frame but once you do, it makes every run smooth and comfortable.

The upper went through reconstruction as well. Gone is the divisive ISOFit in favor of an upper with new engineered mesh and a FORMFIT footbed.

The upper provided me with a secure bootie-like fit without being constricting.

Both the new upper and sole unit worked in symphony with one another in the Guide 13 to provide my feet with the best run from start to finish.

There was one small drawback with the Saucony Guide 13, breathability. Although the double Jacquard mesh upper was breathable, I would have appreciated more breathability.

In my opinion, Saucony is one of the best brands out there for stability trainers. The Guide 13 continues that tradition of offering some of the best Saucony has to offer.

The monumental changes made were successful turning a great shoe into one of the best. This justifies the 120 dollar price tag.

Overall, the Saucony Guide 13 is one of the best moderate stability trainers out there. It is built to last and for any type of workout you would take it on.

If you are looking for a go to trainer for all your runs and won’t break the bank, look no further than the Saucony Guide 13.

We purchased a pair of Saucony Guide 13 from runningwarehouse using our own money. This did not influence the outcome of this review, written after running more than 50 miles in them.

Visit ShopAmazon.com
This page contains affiliate links. As an Amazon Associate I earn from qualifying purchases.
WHERE TO BUY
LOWEST PRICE
$42
AVAILABLE ON SALE:Previous model $66