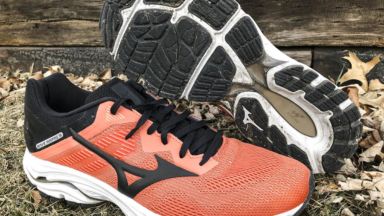 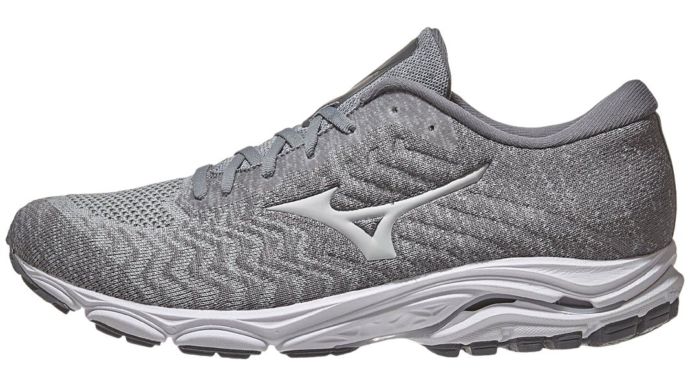 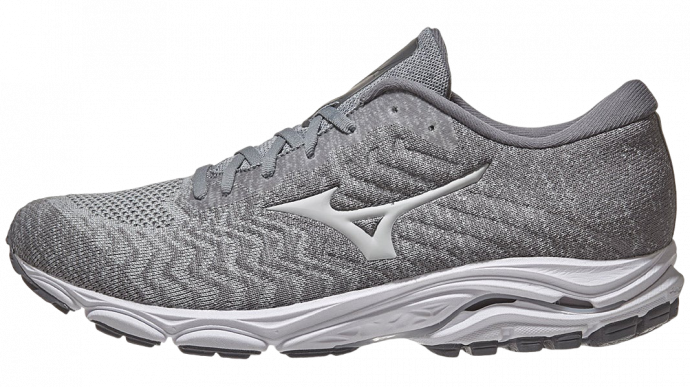 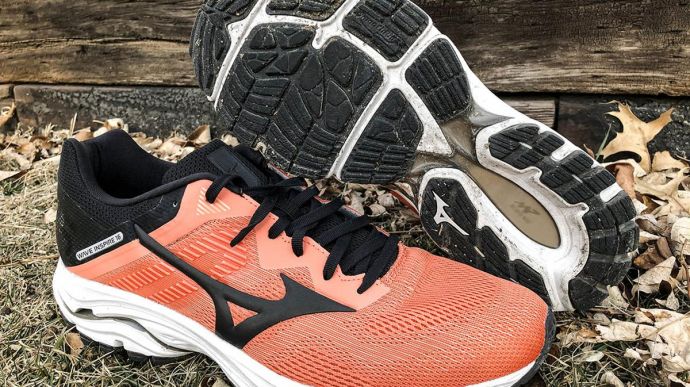 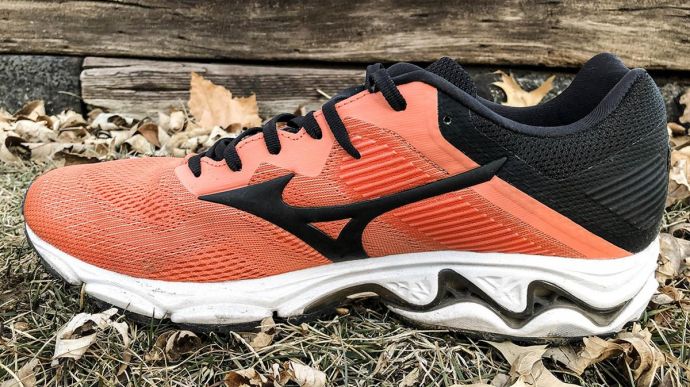 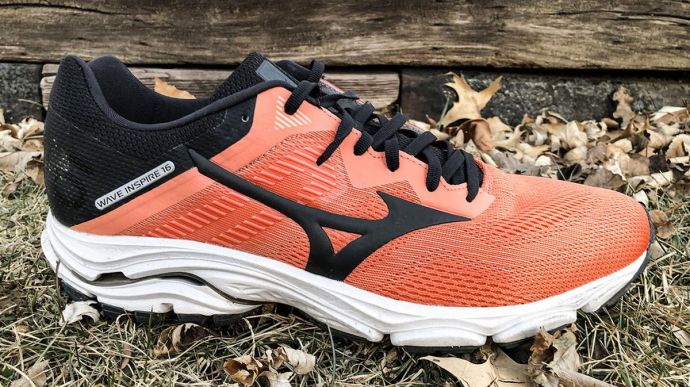 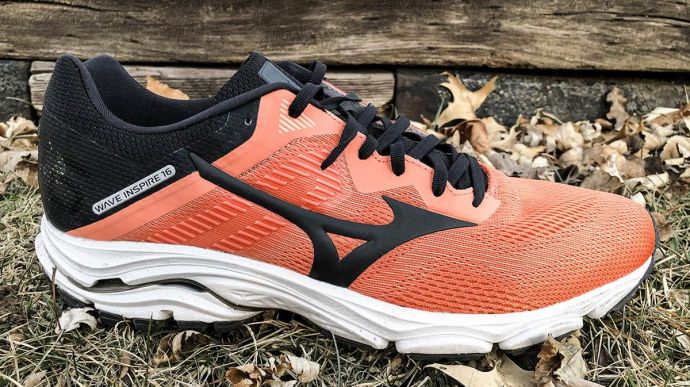 The Mizuno Wave Inspire 16, a moderate stability trainer, is built to be a workhouse. The inconsistent ride makes it hard to want to run in them everyday.
WHERE TO BUY
LOWEST PRICE
$63
SHOE INFO
Mizuno
Brand
Wave Inspire 16
Model
Stability
Type
10 oz. (283 gr.)
Weight
135 US$
MSRP
12 mm
Heel Drop
Mizuno Wave Inspire
Family
Wave Inspire 15
Previous model
WHO IS IT FOR
A runner who is looking for a moderate stability trainer to add to their rotation that is built for miles.
Help me choose

The Mizuno Wave Inspire is back with the 16th edition this year. It has become a cornerstone of their stability line. There are a couple of small but effective updates to the Wave Inspire 16.

I was able to review the Wave Horizons last year and present a valid comparison.

The Wave Inspire 16 retails for $135, which places them on the higher end of the price range for stability trainers. They compete with Saucony Omni, Brooks Adrenaline, Asics 2000 and Kayanos, Hoka One One Arahi.

When I opened the box I was surprised. I thought I was getting another colorway and instead got the Salmon Buff. I instantly enjoyed the colorway. I tend to gravitate towards brighter running shoes.

The combination of the bright orange and black heel make the shoe pop. It also allowed for the logo to stand out.

I immediately noticed how heavy these shoes were when I held them in my hands the first time. When I slipped into them, there were different sensations that I was feeling.

There was a bounciness from the topsole which was instantly felt along with a firmness from the wave plate and midsole. I was curious to see how these would interact while out on the road.

I took the Wave Inspire 16 on a relaxed 10k for their first run. They were firm yet had a bounce to them. This provided an interesting ride.

While the back portion of the shoe felt stiff and unresponsive the forefoot potion was dynamic and flexible during the run.

There haven’t been any changes to the midsole of the Wave Inspire 16. Let’s start from the ground up, the material used for the outsole is a blown rubber.

This material was able to handle the elements it experienced without any issues. In the heel, you will find a small amount of X10, a carbon rubber material added to give the outsole more traction.

Like a sandwich the midsole of the Wave Inspire has three parts, U4IC, A Cloudwave wave plate and U4ICx.

The middle layer is the wave plate, another tried and true technology Mizuno is known for. The plate is an elastic, thermal plastic wave running from the heel to the midfoot.

It’s purpose is to provide a springy and well-cushioned ride. On the medial side of the plate is a double fan wave.

The top layer of the midsole is U4ICx, a lighter more cushioned foam compound. A U4ICx heel wedge softens the midsole especially in the high impact areas. This counters the stiffness felt from the wave plate.

The forefoot is the star of the sole unit due to its flexibility and springiness felt on toe offs. The combination of the U4ICx, flex grooves on the outsole and the wave plate ending in the midfoot area worked seamlessly together to propel me further and faster.

The upper of the Wave Inspire 16 is built with a new engineered mesh which was developed for a softer fit and a wearable day to day look.

In the forefoot is Dynamotion fit, a stretch material forefoot and collar construction meant to improve the overall fit of the shoe.

This new mesh gives the upper a blanket like feel from heel to toe. It molds and adapts to your foot similar to an offering from Saucony.

The upper has a classic yet modern look to them. One small modern change they made was to move the toe cap from the outside to the inside of the shoe.

You will find stitched overlays in the upper which doesn’t cause any points of irritation. The overlays are on both sides of the shoe and help with the fit.

Because of these overlays the midfoot area is locked down more effectively.

The cushioning is ample throughout the upper including the tongue and especially the heel collar. The cushioning locked in my feet and resulted in a secure fit.

The lacing system sits low against the tongue of the shoe. This in turns makes a long tongue seem even longer. Luckily, it didn’t have any negative effect on the fit of the shoe.

The Wave Inspire locks your foot in place where you need it while also giving you enough room to move in other areas. There were no areas of tightness throughout the shoe.

The generous toebox complemented the flexible forefoot and allowed for smooth toe offs. The Wave Inspire fit true to size.

This is my second experience reviewing Mizuno. I reviewed the Wave Horizon 3 last year. My overall experience with them was a disappointment. I was looking forward to giving Mizuno a second chance with the Wave Inspire 16.

From the moment I slipped them on I noticed the blanket like comfort of an upper that has been updated. It molded and adapted to my foot as I ran without feeling overbearing.

The cushioning is the right amount from heel to toe which gives you a secure fit every time. It is a durable yet flexible upper built for comfort.

It also has gotten a classic with flairs of modern aspects makeover which make the shoe visually appealing.

While the upper of the Wave Inspire 16 was a strength of the shoe for me, the sole unit left me with mixed feelings.

The forefoot of the sole unit was flexible and springy providing me with smooth transitions and toe offs. This was a result of the U4IC cushioning and flex grooves on the outsole. This allowed me to push the pace if I wanted to.

There is plenty of stability in this shoe provided by the wave plate sandwiched in the midsole. I was well aware of the waves in the wave plate for the first few runs in these.

There is a stiffness felt from midfoot to the heel in the Wave Inspire 16. As a result of the stiffness the energy return is lacking in your stride.

The ride is a firm one with a hint of bounce in the Wave Inspire 16 but they are also heavy and can feel bulky at times.

In my review for the Mizuno Wave Horizon 3 I said “While other running brands are also developing and introducing game changing updates on a semi regular basis, Mizuno has stayed with their wave plate technology which I believe isn’t effective.”

I believe the same could be said to an extent about the Wave Inspire 16. It is almost like running in two different shoes because of the different sensations felt in the forefoot and midfoot/heel areas.

Overall, The Mizuno Wave Inspire 16 were a middle of the road moderate stability trainer.

I enjoyed some runs in them and felt like they provided a smooth and effortless ride while other runs left me unsatisfied because of the stiffness and lack of energy return.

The Mizuno Wave Inspire 16 are built to be a workhorse, unfortunately the ride provided by them makes it hard to want to run in them everyday.

We purchased a pair of Mizuno Wave Inspire 16 from runningwarehouse using our own money. This did not influence the outcome of this review, written after running more than 50 miles in them.

Visit ShopAmazon.com
This page contains affiliate links. As an Amazon Associate I earn from qualifying purchases.
WHERE TO BUY
LOWEST PRICE
$63
AVAILABLE ON SALE:Previous model $149