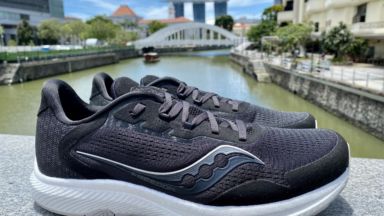 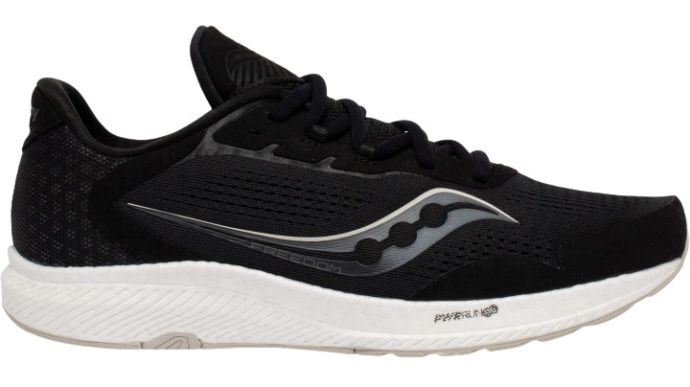 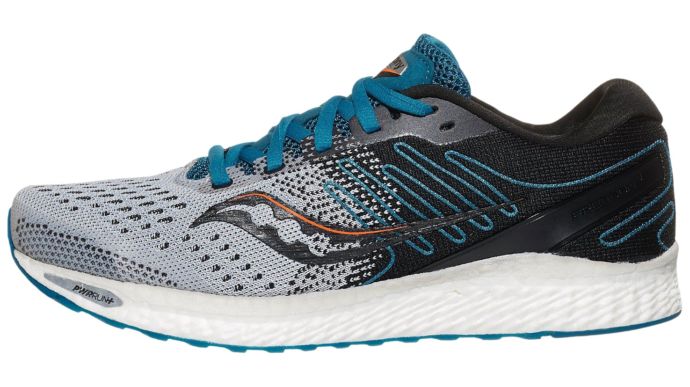 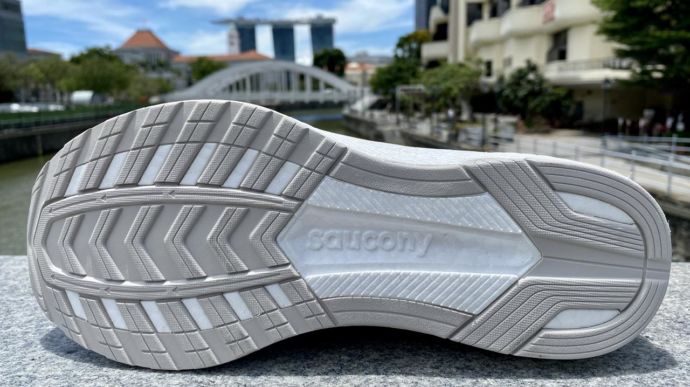 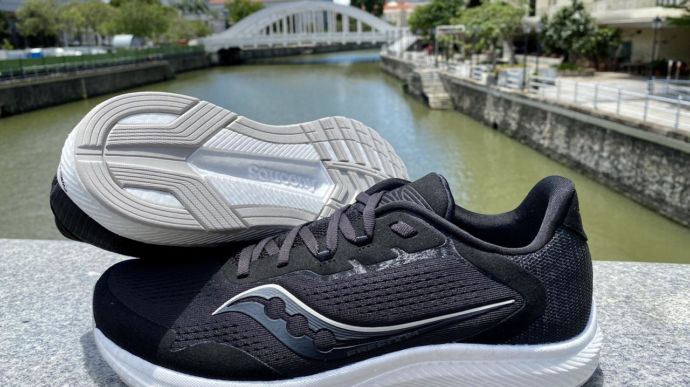 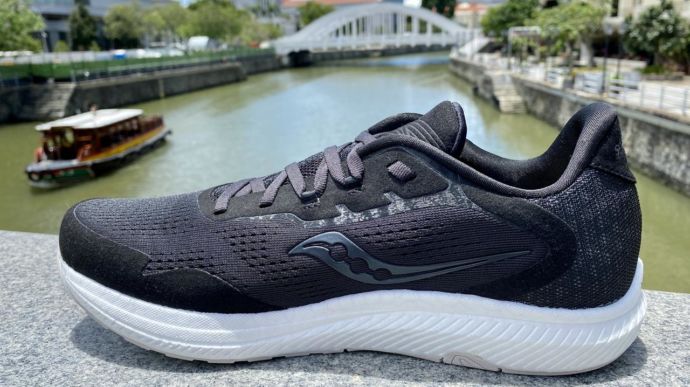 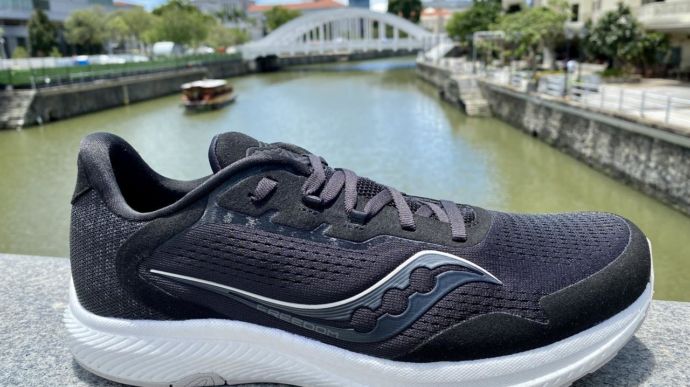 The Saucony Freedom 4 is a flexible tempo trainer with a firm ride, best suited to short distances. It can also be used as a gym or casual shoe because of how comfortable it is.

Version 4 has been updated with a more comfortable upper, a firmer PWRRUN PB midsole and it loses the crystal rubber for a firmer rubber on its outsole.
WHERE TO BUY
LOWEST PRICE
$71
SHOE INFO
Saucony
Brand
Freedom 4
Model
Training
Type
8.5 oz. (241 gr.)
Weight
150 US$
MSRP
4 mm
Heel Drop
Freedom ISO 2
Previous model
WHO IS IT FOR
If price isn't an issue and you're looking for a stable trainer for short runs that can double up as a comfortable gym shoe, the Freedom 4 is for you.
Help me choose

The Freedom used to be an exciting shoe. It was one of the only Saucony shoes to feature a full-length Everrun midsole which, at the time, was Saucony’s premium, top of the range midsole foam.

I can remember running in the first version of the Freedom: it was flexible, lively and fun. There was nothing else like it at the time because it was so versatile and light. It also came out in bright, parrot-like colourways that stood out on the roads.

Last year, when the brand new Endorphin series was introduced, the Freedom became an afterthought. It was no longer Saucony’s premium, top of the range performance trainer. It also still used Pwrrun+, Saucony’s TPU midsole foam.

This year’s Freedom has been updated with PWRRUN PB, a PEBA midsole foam which is the same high-end foam found in the Endorphin Speed and Pro.

The Freedom 4 is now the only Saucony running shoe that utilises the PWRRUN PB super foam without a plate.

The Freedom 4 gains 0.5mm in stack height but weighs exactly the same as the Freedom 3. It also has the same 4mm drop. The insole has “8mm offset” printed on it but it was probably borrowed from a different Saucony shoe.

Saucony now markets the Freedom 4 as a trainer for the gym, running and all-day casual wear. Does this mean that it’s now less of a performance running shoe?

Are the upgrades to the Freedom 4 enough to catapult the Freedom back into the limelight and out of the shadow of the Endorphin range?

When I first saw pictures of the Freedom 4, I was excited that the entire shoe had been revamped.

After receiving it, I compressed the midsole and the PWRRUN PB midsole of the Freedom 4 felt firmer to the touch than PWRRUN+ in the Freedom 3: it reminded me of the old Everrun foam.

When I was taking photos of it, I noticed in the rear view picture that the right heel tab comes up slightly higher than the heel tab of the left shoe.

Luckily, the difference in heel tab heights didn’t affect the ride of the shoe though.

My first run was a long weekend run and I could only run 30 kilometres compared to the usual 40 because it didn’t have enough cushioning.

I was surprised how firm the PWRRUN PB foam felt underfoot and how it didn’t have much energy return. The ride reminded me of the Ultraboost 21.

By the end of the run, my legs were not very happy with me because of the lack of cushioning in the Freedom 4. On the positive side, the ride felt very smooth, stable and natural.

It took a couple days for my legs to recover and for the soreness to dissipate and I kept the distance to under 15 kilometres on the runs proceeding that first long run.

The PWRRUN PB foam in the midsole of the Freedom 4 doesn’t feel like a super foam. It doesn’t have the high level of energy return like other PEBA foams such as ZoomX and Floatride. It feels like TPU, similar to Boost but firmer.

There is very little sink-in cushioning and a lot of the softness comes from the insole as well as the additional thin layer of lime green PWRRUN PB directly underneath the insole.

Overall, I found the ride really firm and unforgiving, especially for efforts longer than 15 kilometres.

The ride also felt flat because there isn’t any high toe-spring SpeedRoll technology that rolls you forward and creates momentum with every stride.

The Freedom 4 is best for steady runs below 5.30 per kilometre though at faster paces, though it doesn’t feel as propulsive or efficient as the Endorphin Speed because of the lack of a nylon plate in its midsole so you feel like you’re working hard to get down to those faster paces.

Because the midsole is thin, the shoe flexes easily but it flexes in the middle of the shoe, unlike in the forefoot like most running shoes without a carbon plate.

I found stability to be very good because of how firm the midsole is and how close your foot sits to the ground. There is very little lean bias so the ride feels very planted.

I like the new outsole configuration of the Freedom 4. It is very similar to the outsoles of the Endorphin Speed and Pro but the Freedom 4 has even more rubber coverage.

Most of the heel and the forefoot are covered with thick, hard rubber which makes the Freedom 4 extremely durable. I expect to get at least 800 kilometres of usage out of the Freedom 4.

The outsole rubber wraps up around the edge of the midsole, just before the midfoot. This is a unique design to increase stability.

The outsole is rather flat so there aren’t any protruding lugs. The Freedom 4 is slippery on wet surfaces but traction is fine when the ground is dry.

The upper of the Freedom 4 is soft, comfortable and reminiscent of a casual shoe upper because of the suede overlays on the toe box, lacing area and heel tab.

The engineered mesh is medium in thickness so the Freedom 4 is suitable for both warm and cold climates.

The best feature of the upper is the rear where there are large, reflective panels that look black during the day but shine at night.

It has a semi-gusseted tongue that is lightly padded and doesn’t move around at all during runs. It reminds me a lot of the tongue of the Endorphin Speed but the Freedom 4’s tongue is covered in suede.

The collar and heel tab are also lightly padded and heel hold is a little loose so you have to use heel lock lacing to get a secure heel lockdown.

The laces are the same flat, stretchy ones found on the Endorphin Speed and Pro. The Freedom 4 fits true to size and there is ample space in the midfoot and toe box for the average foot.

Overall, I found the Freedom 4 to be disappointing. It has no major flaws but $150 is a lot to spend on an average shoe that doesn’t stand out in any category.

There are much better shoes like the New Balance Rebel v2 and the Hoka Mach 4 which are lighter, more versatile and cheaper than the Freedom 4.

The PWRRUN PB foam in the midsole doesn’t feel like a new-age super foam and the absence of a plate in its midsole leads to a flat ride without any propulsion or pop.

The Freedom 4 does however have a really tough, durable outsole and a comfortable upper which is not overly padded. It’s an excellent shoe for gym and casual wear but as a performance running shoe, it’s missing something.

I feel that Saucony put too much emphasis on style and comfort rather than improving the performance of Freedom.

I really hope Saucony adds to the midsole stack height of the Freedom 5 and implements SpeedRoll technology so that it has greater versatility and more pop.

Unfortunately, the Freedom 4 is still living in the shadow of the Endorphin series.

We purchased a pair of Saucony Freedom 4 from runningwarehouse using our own money. This did not influence the outcome of this review, written after running more than 50 miles in them.

Visit ShopSaucony
This page contains affiliate links. As an Amazon Associate I earn from qualifying purchases.
WHERE TO BUY
LOWEST PRICE
$71
AVAILABLE ON SALE:Previous model $77