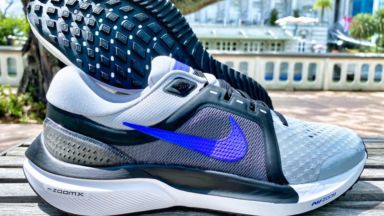 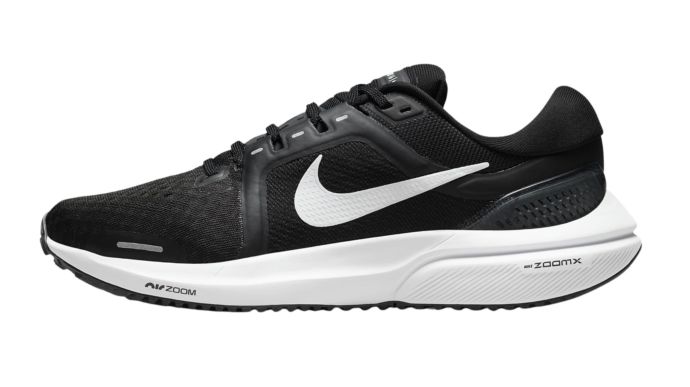 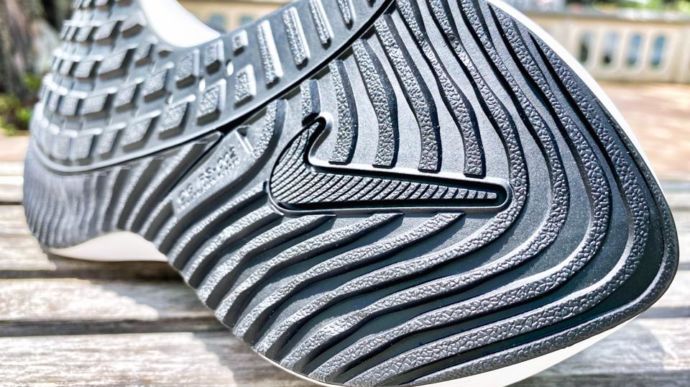 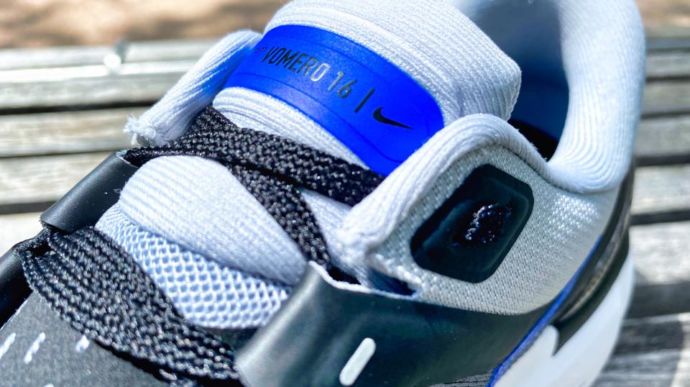 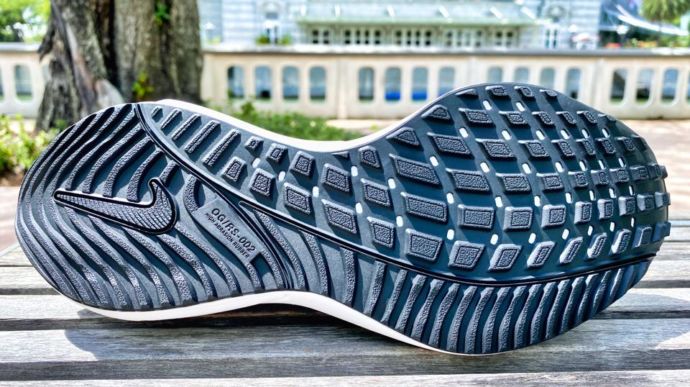 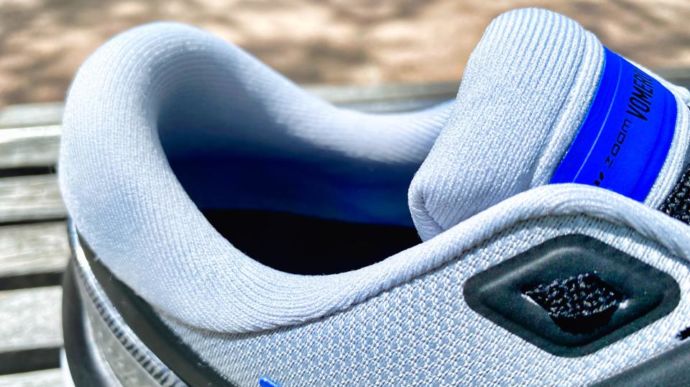 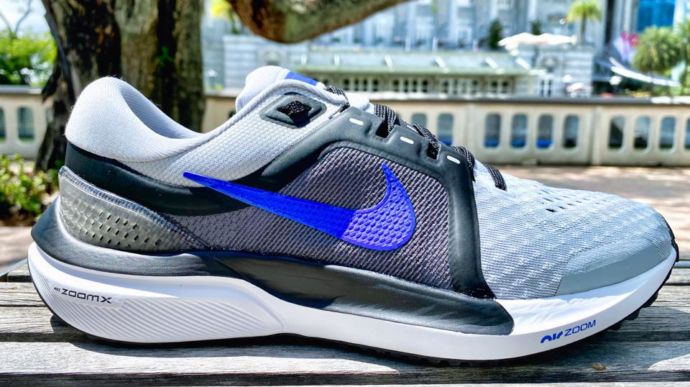 The Nike Air Zoom Vomero 16 is a plusher, more comfortable version of the Pegasus 38 that has greater versatility because of its ZoomX core. Version 16 is only an upper change with the main difference being that it now has a thick, padded tongue which makes it feel more luxurious.
WHERE TO BUY
LOWEST PRICE
$149
SHOE INFO
Nike
Brand
Air Zoom Vomero 16
Model
Cushioning
Type
10.90 oz. (309 gr.)
Weight
150.00 US$
MSRP
10 mm
Heel Drop
Nike Vomero
Family
Air Zoom Vomero 15
Previous model
WHO IS IT FOR
If you find the Pegasus 38 too soft and slow, the Vomero 16 is a great alternative which is more expensive but does much better at handling faster-paced runs. The Vomero 16 is extremely comfortable and has a more durable outsole than other daily trainers.
Help me choose

When I think of the Air Zoom Vomero, I think of premium, lofty materials with a sinfully luxurious ride. That’s what the Vomero traditionally was.

The Vomero of today has been transformed. Just like the Adidas Boston 10, the Vomero now fills a different role in its respective lineup.

This year, with the arrival of the Invincible Run, we now know that the Vomero is not supposed to be the max-cushioned trainer in the Nike lineup. It’s supposed to be a more premium, more versatile upgrade of the Pegasus.

Last year, when I tested the Vomero 15, I thought that it was a good shoe but a bad Vomero because it lacked the high level of cushioning we’ve come to expect from a Vomero. I was surprised how energetic and responsive it felt.

The Vomero 16 is a minor update. It has the same midsole and outsole as the Vomero 15 but it has a new upper. The new upper looks very similar to the previous version and you need to examine it very closely to notice the differences.

I have to admit, I wasn’t very excited when I first saw pictures of the Vomero 16. Nike running shoes usually receive upper-only updates every other year but the Vomero 16 looks almost exactly the same as the Vomero 15.

When I put the Vomero 16 on, I immediately took a liking to the new upper. It felt plusher and more comfortable because of the new, thicker tongue. The lacing pressure also felt more evenly distributed.

My first run was an interval workout because I wanted to see how fast I could push the Vomero 16. I found it really easy to pick up the pace and I enjoyed how snappy it felt.

Tempo paces below 5 minutes per kilometre were easy to hold despite how heavy and cumbersome the Vomero 16 looks.

The upper felt much more comfortable than the Vomero 15’s upper and the overall ride experience was better than its predecessor even though the updates are minimal.

The best way to think of the Vomero 16 is like a Pegasus 38 Pro or a Pegasus 38 Plus: it’s faster, more comfortable and more durable.

This is thanks to the Vomero 16’s ZoomX core which provides significantly more energy return than Nike’s ordinary-feeling React foam. As a result of the ZoomX, the Vomero 16 feels much better on faster paced runs than the cheaper Pegasus 38.

The Vomero 15 and 16 have an identical sole platform so the ride remains unchanged. The cushioning is medium soft in the heel and firm in the forefoot.

I enjoyed the Vomero 16 most on steady runs, slightly faster than easy pace. The large, thick Zoom Air bag in the forefoot provides a springy “pop” during toe-offs which makes you want to go fast.

I found the Vomero 16 very stable because in the midsole, the softer ZoomX core is surrounded by firmer EVA foam so your foot is supported by the EVA outer rim.

One thing to beware of is that the Vomero 16 doesn’t have a soft ride. The pressurised airbag in the forefoot has more resistance than normal midsole foams and on distances longer than 25 kilometres, the airbag feels harsh underfoot so I don’t recommend it for long runs.

If outsole durability is the most important aspect of a running shoe for you then you can stop reading and buy the Vomero 16 now because it’s the most durable outsole I’ve ever come across.

I’ve put 83 kilometres on my pair and there are only minor scuffs on the ribbing of the outer lateral heel.

Not only is the rubber extreme tough and hard-wearing but it’s thick and there’s plenty of it with no exposed midsole foam. Nike calls this in-house developed rubber “OG/RS-002” high abrasion rubber and while durability is excellent, traction is not very good on wet surfaces due to how hard the rubber is.

At first glance, there doesn’t seem to be too many differences between the Vomero 16 and the Vomero 15’s upper but after running in it, I can say that the updates are substantial.

The biggest and most important change is that the tongue is no longer a flat, racing-inspired one but a thick, generously padded tongue. This suits the Vomero much better because it’s never been a shoe for racing and the increase in weight is a small price to pay for a much more comfortable trainer.

The tongue is attached to an inner sleeve so there’s no tongue slide but it does make the Vomero 16 warm and it makes it better suited to cooler climates.

The other change is that there are no longer thin midfoot straps to provide midfoot lockdown but instead, midfoot panels are used. These panels distribute pressure more evenly and also make the upper more comfortable.

An internal heel counter, as well as a stout, plastic external clip, make sure that your heel is locked in securely. I experienced no heel slippage and didn’t even have to use a runner’s knot.

When it comes to fit, the Vomero 15 was a half size too large and you needed to size down but with the thicker tongue of the 16, your entire foot is pushed backwards so the upper is less roomy and the fit is true to size.

The Vomero 16’s upper feels like a true, plush Vomero upper and it’s the most comfortable upper of all the Nike trainers.

I enjoyed the Vomero 16 more than the Vomero 15. Its updated, plusher upper makes it much more comfortable and it reminds me of the Vomeros of old, when they were designed for maximum comfort and maximum cushioning.

The Vomero 16 is a really well-built, comfortable trainer that can easily handle fast-paced runs thanks to its ZoomX core and Zoom Air unit. It can handle most types of paces and runs with the exception of long runs because of its firm forefoot.

If you’re looking for a max-cushioned, super soft trainer, the Vomero 16 isn’t that shoe. The Invincible Run is a much better max-cushioned Nike trainer which delivers a softer underfoot experience.

The Vomero 16 is the trainer you pick up if you want one of the most durable shoes on the market that can also handle a variety of paces. It’s not a light shoe but it’s built like a tank and it feels luxurious on foot.

At $150, the Vomero 16 is an expensive shoe and $30 more than the Pegasus 38. The Pegasus 38 is lighter but also softer and more sluggish. I’d say if you have the extra cash, get the Vomero 16. It’s more durable, more comfortable and much more versatile.

Outside of Nike, there are far better options than the Vomero 16 which are just as versatile but lighter and cheaper. Trainers such as the Novablast 2, Mach 4 and Rebel v2 are more engaging, more fun to run in and can do long distances better than the Vomero 16.

However, where the Vomero 16 beats all, is outsole durability. No other shoe even comes close.

As editorial policy, we do not accept free samples from companies.
We purchased this pair of Nike Air Zoom Vomero 16 at Running Warehouse with our own money.

Visit ShopNike
This page contains affiliate links. As an Amazon Associate I earn from qualifying purchases.
WHERE TO BUY
LOWEST PRICE
$149