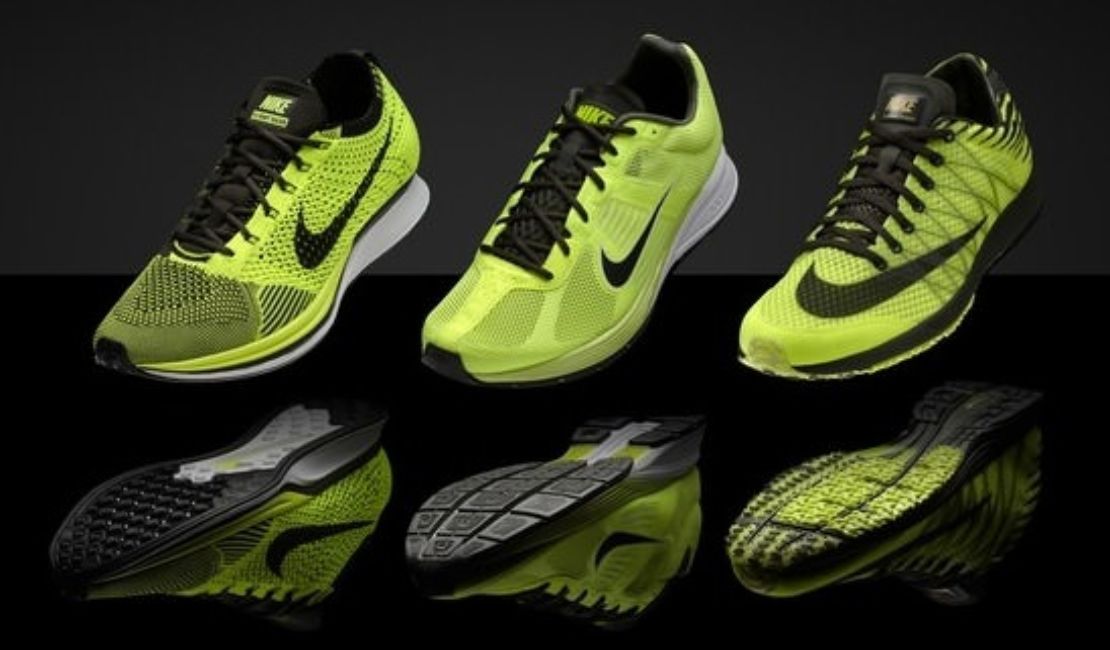 If there was one particular shoe that simply stood out amongst other styles and brands at the 2012 Summer Olympics in London, it was the neon yellow Nike Volt.

Indeed, in certain track and field events at the Olympic Games, particularly the Men’s 5,000 and 10,000 Meter Finals, it appeared that nearly every runner wore the distinctive-colored shoes that were so bright, they might even glow in the dark. And yes, Great Britain’s Mo Farah blazed to the gold medal victory in both events wearing Nike Volts.

According to a recent article from the Daily Mail, over 400 athletes wore Nike Volts in competition at the London Olympics and of those 400, 68 athletes won Olympic medals, including 25 gold medals. Brian Strong, the North America Senior Communications Manager for Nike described the explained the use of the eye catching color of the Nike Volt:

“Of all the colors of the rainbow, the human eye and visual system is most sensitive to the yellow/green zone,” The power of this visual signal is capitalized on when the background is highly contrasting, which the London Olympic track is — reddish. The human eye has relatively low sensitivity to red vs. much higher sensitivity to Volt color.”

The Nike Volt is actually a collection of 16 different types of running shoes specially designed for the 2012 London Olympics. Each particular version of the Nike Volt is broken down into the following four categories: Sprints, Distance, Field, and Marathon the entire lineup can be viewed here. The shoes that helped make Mo Farah a double Olympic champion in the 5,000 and 10,000 Meter Finals were the Nike Zoom Victory Elite. Like the other versions of the Volt, the Victory Elite utilizes Nike Flywire threading that is used to minimize weight and maximize stability and is combined with what Nike describes as an ultra responsive carbon plate.

Of course there were other gold medal winners who used other brands such as Jamaica’s Usain Bolt using Puma evoSPEED running shoes and Great Britain’s Alistair and Jessica Ennis wearing Adidas adiZero Primeknit running shoes. Yet while Adidas and Puma both scored marketing points with the positive exposure from athletes using their specialized brand of shoes, it was Nike that gained most of the attention and it wasn’t just because of the Volt’s eye catching color, despite not having to pay millions of dollars for a corporate sponsorship at the London Olympics.

Jessica Ennis with her Gold medal and her Adidas

While Nike Volt has been receiving the majority of attention through various forms of online media, the technology that was used for the new Adidas Adizero Primeknit running shoes introduced before the London Olympics should not be ignored. The Adizero Primeknit features a new seamless engineering technology that knits the entire upper portion of the shoe in one continuous piece whereas traditional shoes are built from several different pieces. How successful the shoes will be for the public remains unclear but a number of otherOlympic athletes sponsored by Adidas won gold medals in London, including Great Britain’s Andy Murray and Laura Trott and the entire U.S. Women’s Gymnastics team.

Adidas and other corporate sponsors paid in the excess of $150 million for an official Olympic sponsorship whereas Nike advertising campaign simply used what is known in the business world as ambush marketing. Nike has been roundly criticized for skirting around the rules and not paying for corporate sponsorships, not just for the most recent Summer Olympics that concluded on Sunday, but in previous Olympics as well. However online resources are reporting that Nike will serve as the official sponsor for the 2016 Summer Olympics in Rio de Janeiro while Adidas will be in a potential position to ambush its rival, thus turning the tables on the two biggest shoe companies on the planet.

Mo Farah Faces Heat For His Stand on L-carnitine injections During the 2014 London Marathon
Running Shoe Soles by Michelin
Nike Launches the Air Zoom Vomero 15 in South Korea
The running shoes of the future, the future of running shoes
The Nike Structure Lives
Puma Teams up with MIT to Create the Calibrate Runner