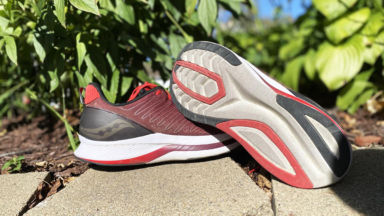 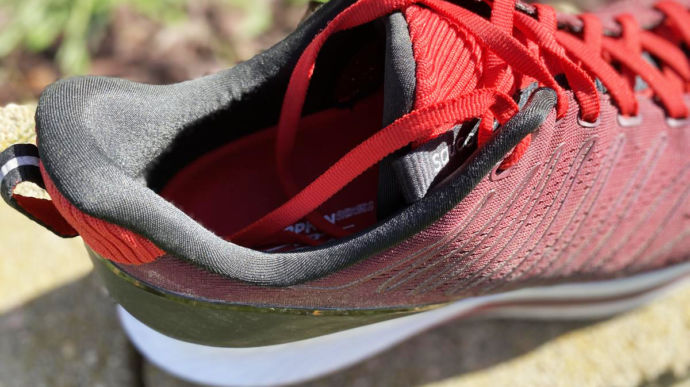 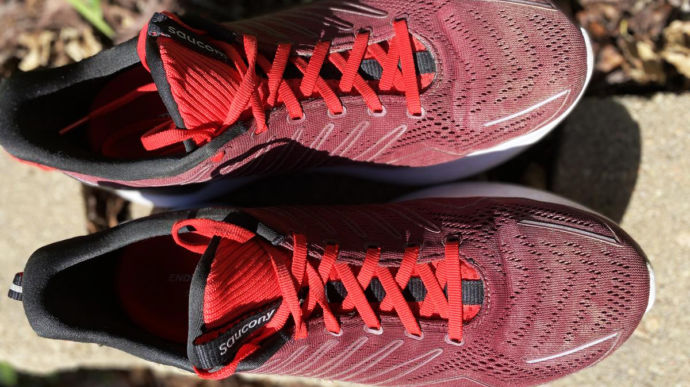 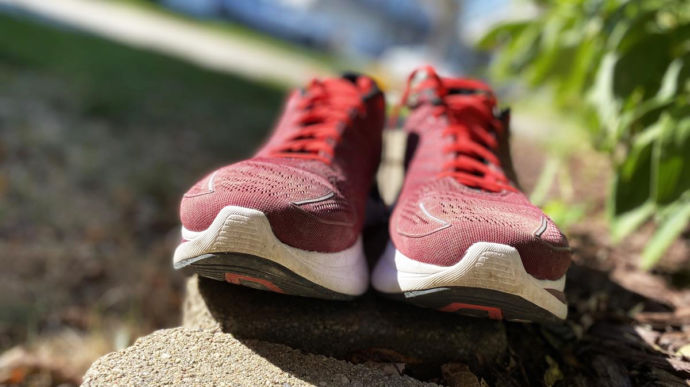 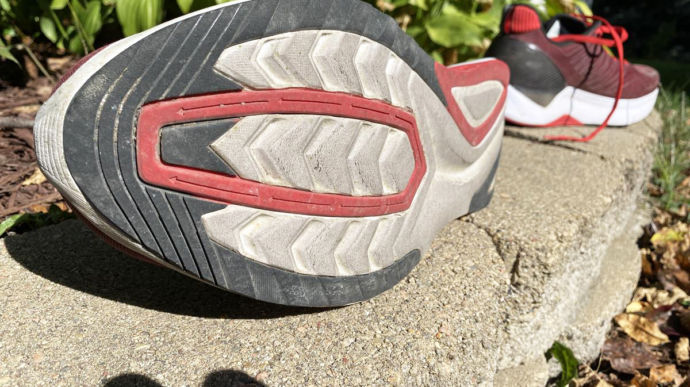 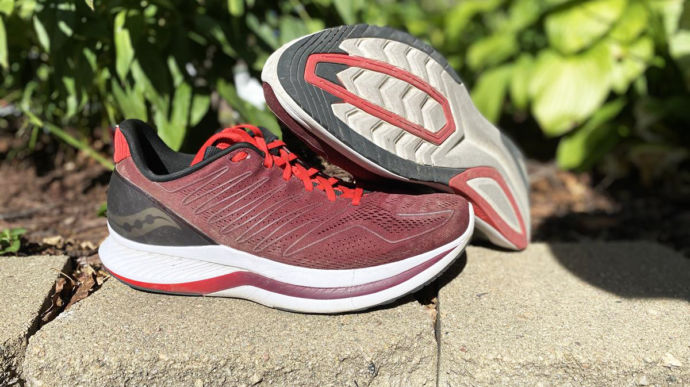 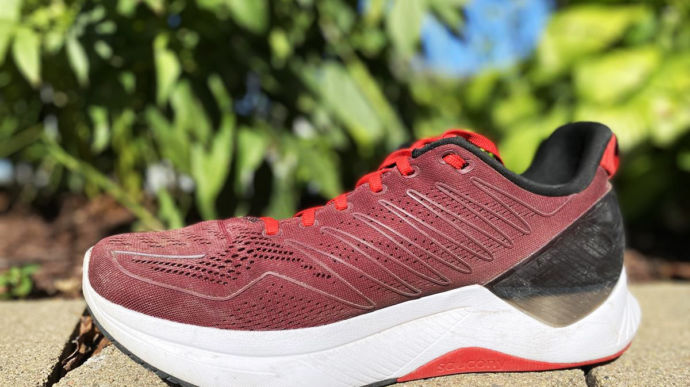 The Saucony Endorphin Shift is the high-cushion, daily trainer from the Endorphin line. It's a perfect compliment with the Speed, and gives tons of cushion for long runs or recovery runs.
WHERE TO BUY
LOWEST PRICE
$66
SHOE INFO
Saucony
Brand
Endorphin Shift
Model
Cushioning
Type
10.4 oz. (295 gr.)
Weight
139.95 US$
MSRP
4 mm
Heel Drop
WHO IS IT FOR
This shoe is really for anyone wanting max cushion but still wanting an aggressive toe off for speed. This shoe is even better when paired with the other offering from the line.
Help me choose

The Endorphin Shift is Saucony’s companion to the Pro and Speed. This shoe is designed to log most of the miles during your training with the family – with the Speeds taking tempo/speed days and the Pros being your race-day shoe.

With that in mind, these shoes were designed to be forgiving and let you slow down from your hard workout paces.

For doing that, Saucony added a ton of cushion to the shoe, but kept the SpeedRoll technology to make sure you still had the same feel as you did with the other offerings.

At $140, the Shift will compete with most top-of-the-line daily trainers like the Brooks Glycerin, Nike Vomero, Hoka One One Bondi, or even Saucony’s own Triumph (a great shoe itself).

But from those on the list that I’ve tried, the Shift is probably the one I’d go back to again and again.

When I got these shoes, I was excited to see how they matched with the Speeds. I got the red colorway because the original (and now arguably iconic) White Mutant was a two month wait for my size.

When I got the shoes, I was instantly happy to see them. They looked great in the box, and even better on the feet.

When I first put them on, it was like standing on clouds, but clouds that wanted to roll forward and propel me into a run. So, I listened to them and took them out on a quick 4-mile jog. And they felt great.

Tons of cushion, but I could feel energy return on each toe-off and the forefoot roll kept my stride constant. Simply, I was in love.

I knew I’d have my work cut out for me to find some negatives. I did, but in the end, it wasn’t much.

The sole unit of the Shift is a thing to behold. Made exclusively of Saucony’s newest foam, PWRRUN, it is soft and responsive.

By providing a very high stack heigh, 35mm in the heel and 31mm in the forefoot, Saucony delivers a soft ride for long runs.

One of the most important aspects, however, of the sole unit is that they incorporated two different densities of foam so you get different benefits on your foot.

From the heel to the midfoot, the foam is very soft and cradles the foot, but then as it moves into the forefoot, it hardens up and becomes more dense. This allows for a great return of energy on your toe off.

The outsole of the shoe is mostly made of foam, and you’ll see some wear and tear as you run in the shoes. However, they incorporate strategically placed XT-900 rubber on high impact areas of the outsole for better grip and shock absorption.

This rubber is enough to give you decent grip on most surfaces, however, I felt the grip to be a bit lacking when doing early-morning runs on dewy, wet cement.

At no point did I feel that I may fall, but I also didn’t feel 100% secure either.

With the materials explained, we can get to the main event of the sole unit, the shape. This sole unit was designed to look, and act, like the footing of a rocking chair, this is what Saucony calls “SPEEDROLL” technology.

That means you’ll see one of the most aggressive forefoots out there. And you notice it when it is on your foot.

This rocker design rolls your foot through the transition – whether that be from heel or midfoot – and immediately into your next toe-off.

This means the cadence and “pop” of the shoe stay high even with the higher weight and stack.

Beyond that, the SPEEDROLL forces you as a runner to maintain good running form. With the way the foot rolls to the toe-off and drives your knee up, you don’t have much choice in the matter.

It demands a higher knee drive and a taller kick. If you are a “shuffle runner” – as I’ve been known to be much of my time running – this can feel weird and like the shoe is fighting you.

But if you give in, then the shoe is one of the smoothest rides I’ve experienced.

The upper of the shoe is very simple and works for what it needs to do. Made of an engineered mesh, the upper is breathable and feels pretty light.

There is not much on it, as Saucony was going for the feel of the Endorphin track spike and letting your foot feel free and unencumbered. The 3D-Printed overlays are light and non-constricting.

On the heel of the shoe, Saucony uses a TPU heel counter to keep you locked in without adding much weight to the shoe. I think it does a great job, and have not felt my heel shift once while wearing the shoe.

The upper fits true to size for my Size 13, and has the proportions I look for in a shoe.

In the heel it is tight to medium, loosening slightly (but not much) in the midfoot to then opening up a good amount in the forefoot so your toes have room.

It will not be compared to an Altra for toe room, but there is definitely enough room for your toes to feel comfortable for the longer runs.

Having already ran in the Endorphin Speeds, I was very interested to see how the daily-training member of the family would fair.

And after logging more than 150 miles in my pair, I know why they are a family. The way these shoes work together for different runs and goals is quite remarkable.

I instantly fell in love with this shoe when I took it on a run, and that feeling never really left. I found some things that I would change, but they weren’t much.

Personally, I wish the outsole had more of the rubber for more grip.

At a high stack as it is, and the fact that mine already weigh around 11oz (size 13), a half an ounce more of rubber won’t hurt performance and if anything will make it a better shoe.

Beyond that, the only other complaint I had was the shoe laces, and that’s picking nits.

This shoe is a tremendous offering that goes great with its family, but could be a great addition to anyone’s closet even by itself.

Although I liked the Speeds more, this is a shoe I would recommend to anyone looking for a high-cushion, high-mileage, daily trainer.

The Endorphins, and the Triumph update have easily vaulted Saucony to the top of the running shoe world in my mind.

We purchased a pair of Saucony Endorphin Shift from runningwarehouse using our own money. This did not influence the outcome of this review, written after running more than 50 miles in them.

Visit ShopSaucony
This page contains affiliate links. As an Amazon Associate I earn from qualifying purchases.
WHERE TO BUY
LOWEST PRICE
$66