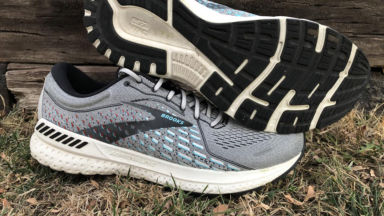 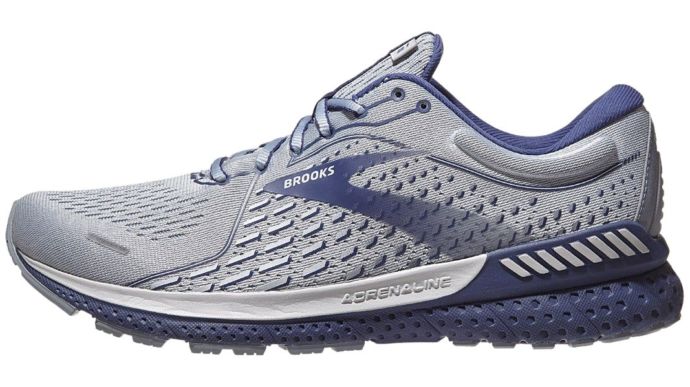 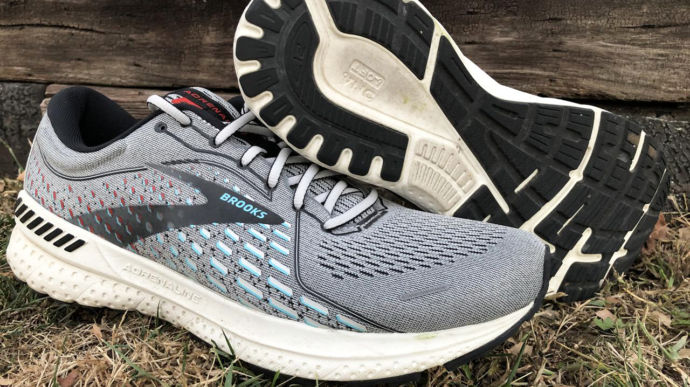 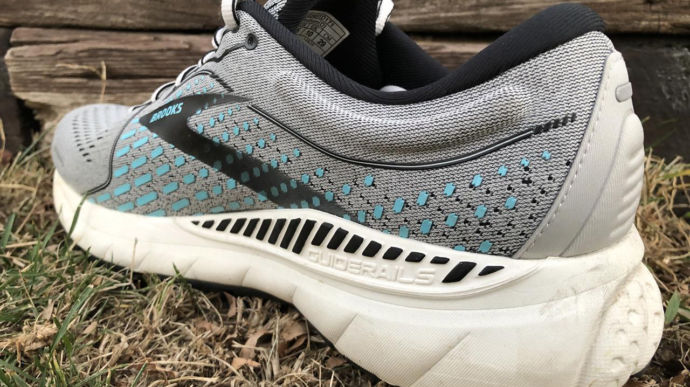 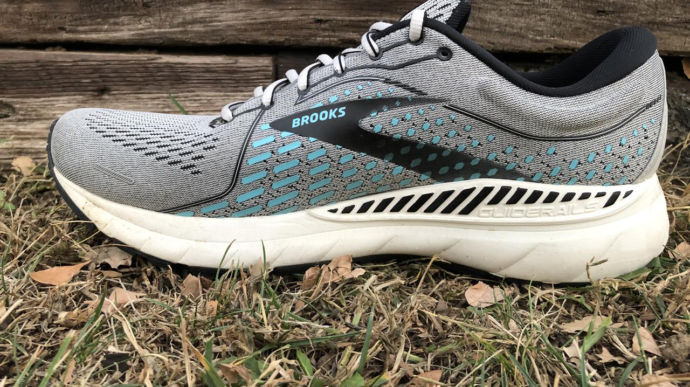 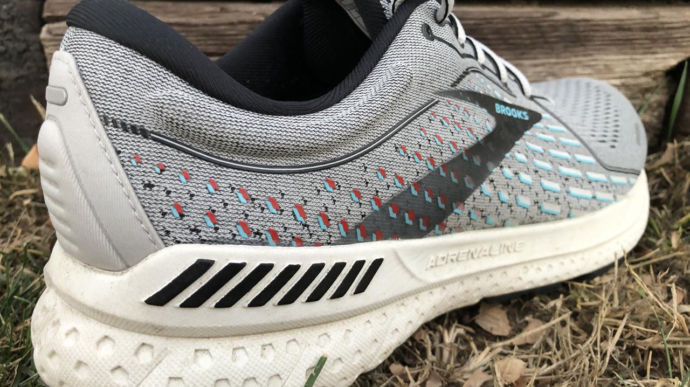 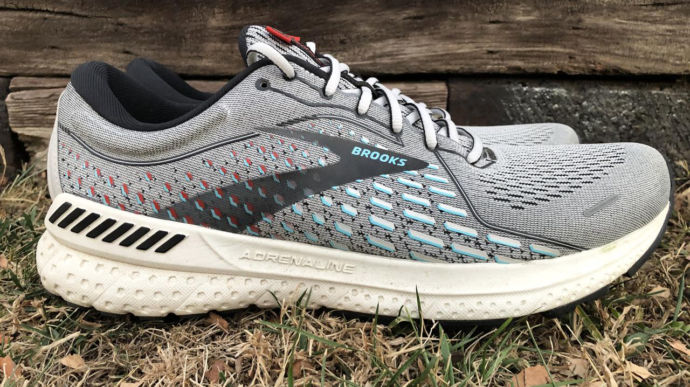 The Brooks Adrenaline is celebrating its 21st birthday this year. This is quite the accomplishment given the constantly evolving nature of running shoes. Not many shoes out there can say they made it to their 20th edition.

The Adrenaline is built on tried and true technologies Brooks has tweaked every few years. The Adrenaline and its neutral counterpart the Ghost are Brooks best selling trainers.

The Transcend introduced guide rails to the lineup, they were then incorporated into the Adrenaline and Ravenna two years ago.

The Brooks Adrenaline retails for 130 dollars which places them right in the middle of a crowded field of stability trainers. Other trainers it competes with are the Saucony Omni, Mizuno Wave Inspire and the ASICS GT-2000.

When these arrived I was excited to review them because I have never run in a pair of Adrenalines before. When I opened them up I was immediately impressed.

Now, I chose the Jet Stream/Black/Capri colorway and I enjoyed the mix of gray, black and accents of teal and burgundy. They provide a small pop of color.

I joked with my running friends that they are my “dad shoes” because they look like a pair my dad would wear along with me now being the father of two little ones.

If you are looking for a more eye-catching colorway Brooks has 9 options to choose from.

Upon slipping them on for the first time I noticed how wide they felt. There was no tightness experienced. They had a firmness to them I wasn’t used to.

I knew from experience Brooks trainers take a little longer to break-in. The drop was also evident, it is a 12mm drop in both the mens and womens.

A 10k was their maiden voyage. The drop and firmness took some getting used to. I appreciated their width because it prevented the usual tightness I experience in the midfoot.

They provided a natural and comfortable ride from the first stride. By the end of the run, I was looking forward to more miles in them.

The Adrenaline underwent a monumental change between the 18th and 19th editions. They eliminated the medial post and installed their guide rail system in its place.

For those runners who are unfamiliar with the guide rail support system, you have two guide rails on both sides of the foot (a longer medial one, a shorter lateral one) that balance your foot as you run, similar to bumpers in bowling.

It is an adaptive system and only engages when you need support. This change was monumental at the time but now three years in and it is the norm.

They made small changes to last year’s model along with this year’s model. Let’s start from the ground up.

Blown rubber is found on the outsole of the Adrenaline. It is built to last hundreds of miles. Omega flex grooves are strategically placed on the outsole to give flexibility to the shoes.

These grooves were paired up with segmented crash pads. They worked together to provide a smooth transition from initial midfoot strike to toe off. I felt the flexibility as I ran.

The midsole of the shoe uses a dual-foam design, with the DNA Loft as the main foam coupled with BioMoGo DNA.DNA Loft provides a firm yet responsive ride.

Once the shoe was broken in at about 30 miles the cushioning softened up a bit and provided a better ride, due to the BioMoGo DNA. One small change with the DNA Loft cushioning was extended from heel to toe on the lateral side.

I would say I was fortunate going into this review. I hadn’t run in a pair of Adrenalines before which means I had no experience with the pre guide rails version.

Brooks’ guide rail system basically serves as balancing bumpers for feet and ankles. They only engaged when I needed them to.

They cradled my heel and ankle making for smooth landings. This was all done without me being aware they were there.

The upper of the Adrenaline 21 largely remains the same as the previous edition. Last year they introduced a new engineered mesh which provided more structure.

The structure was balanced, it maintained its form while also being flexible. The mesh is breathable and double layered.

The Brooks Adrenaline upper is a wider upper than other offerings out there. There was no tightness throughout the upper. The heel counter was updated slightly with more cushioning added.

It has an ideal amount of cushioning which translated into a secure heel fit and added stability. The non connected tongue is well cushioned and added to the secure fit of the trainer.

Brooks uses 3D fit print to construct the upper of the Adrenaline. There are no overlays as a result. There were no points of irritation. The traditional lacing system allows you to tie once to get the perfect fit.

Brooks is a no-nonsense running brand in my opinion: They know what they do well and stick to it. They have built a loyal following by releasing reliable trainers year after year.

I think back to a roommate in my college days who would buy the new version of Ghost when they were released every year.

The durable midsole provided a firm yet responsive ride. The GuideRail system cradled my feet as I ran in them giving me the right amount of stability when needed.

It was a reliable ride whether it was 2 miles or 12 miles. The midsole was built to last for hundreds of miles.

Although a great shoe, and one I’ll continue to use, the shoe is not perfect. There are two main negatives that linger in my mind. The biggest issue for me was the 12mm drop.

This extreme drop almost made me feel like I was running on a slope. Anymore, the standard drop is 8-10mm, and I would like to see Brooks come to the modern world with that change.

The other main drawback for me was the break-in time. Most running shoes are ready to go straight out of the box, yet these took more than 30 miles to get a good feel for them.

An impatient runner may give up on them before they are ready. That would be a real shame, because once they are broken in, they are a dream in which to run.

The upper of the Adrenaline aided in providing stability. The heel counter is a strength of the upper. It was cushioned and held my feet in place.

One aspect of the shoe I liked was the width. It isn’t a tailored fit but it gives your feet room to feel and splay out naturally. This natural feeling is extended to the engineered mesh because of its flexibility.

Priced at 130 dollars, the Brooks Adrenaline is worth every penny. They provided me with countless comfortable miles because of the execution of all aspects.

They were trainers I kept coming back to and have been put into my rotation.

Many brands are constantly trying to come up with new technologies and new shoes that catch a runner’s eyes. Brooks has always been a brand that sticks to what it does best.

They remind me of a restaurant that has 3 to 4 amazing things on their menu as opposed to a restaurant with 50 mediocre options. The Adrenaline is evidence of that approach.

There is a reason it has the GTS (Go To Shoe) label. It is a simple, reliable, and highly enjoyable shoe to run in.

Sure you could find more visually appealing stability trainers out there but I doubt you will find one that consistently performs as well as the Brooks Adrenaline.

We purchased a pair of Brooks Adrenaline GTS 21 from runningwarehouse using our own money. This did not influence the outcome of this review, written after running more than 50 miles in them.

Visit ShopAmazon.com
This page contains affiliate links. As an Amazon Associate I earn from qualifying purchases.
WHERE TO BUY
LOWEST PRICE
$106