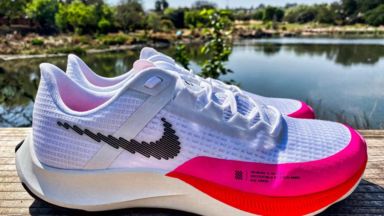 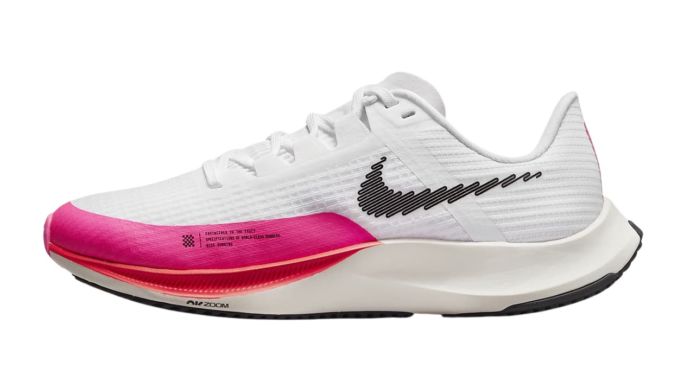 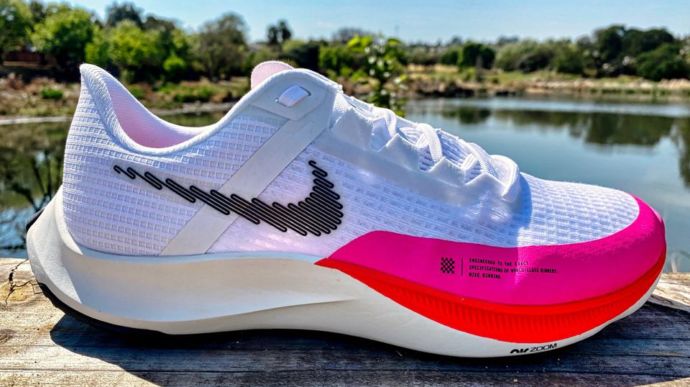 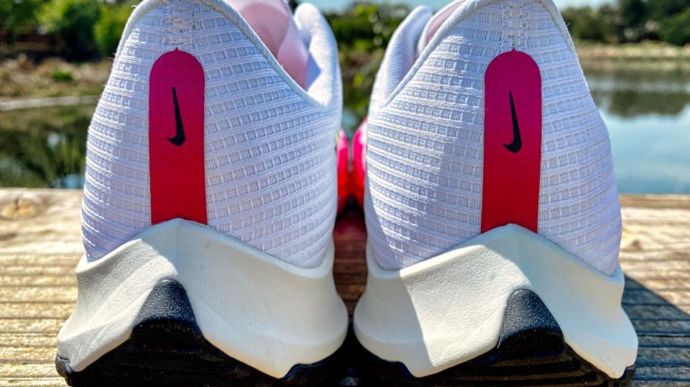 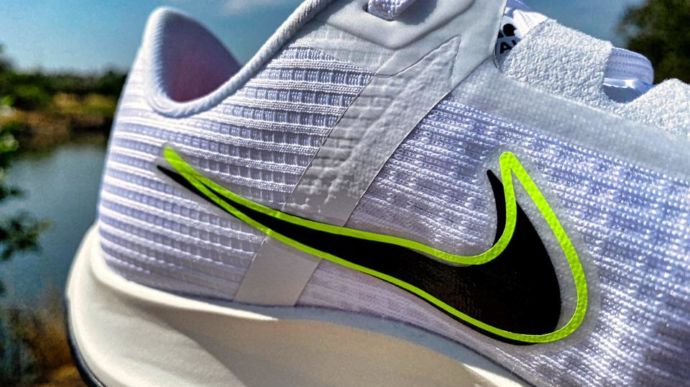 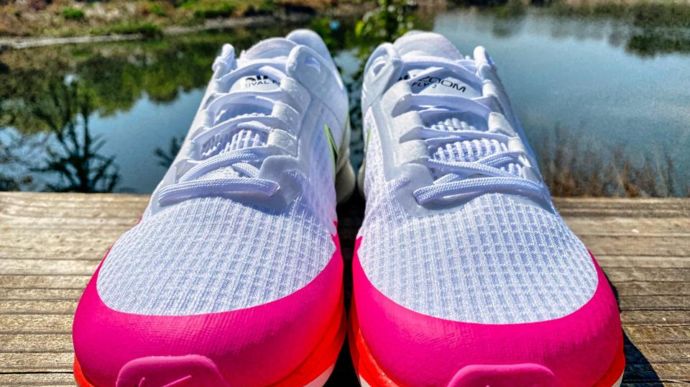 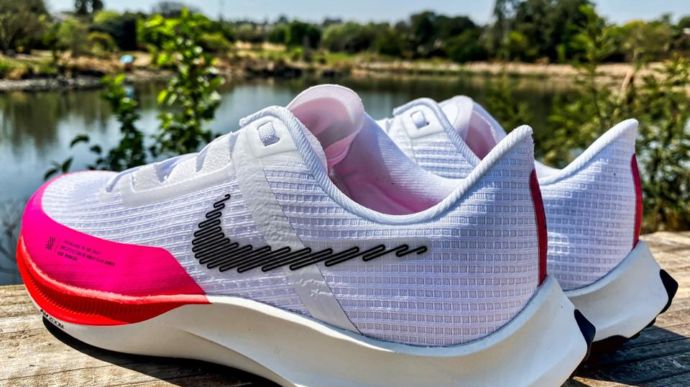 The Nike Air Zoom Rival Fly 3 is an old school, lightweight tempo trainer with a flexible forefoot and a natural ride. It's best suited to short, speed workouts but it can also handle long distances. Version 3 of the Rival Fly has been updated with a softer Cushlon midsole and a thicker, more comfortable upper which makes it a better daily trainer.
WHERE TO BUY
LOWEST PRICE
$100.00
SHOE INFO
Nike
Brand
Air Zoom Rival Fly 3
Model
Lightweight
Type
8.40 oz. (238 gr.)
Weight
100.00 US$
MSRP
8 mm
Heel Drop
WHO IS IT FOR
If you're a runner who prefers a natural-feeling traditional trainer over a more modern, plated trainer for speed workouts, the Rival Fly 3 is the shoe for you. It's durable, comfortable and good value for money.
Help me choose

With more and more runners opting for carbon fibre plated shoes for their interval and tempo workouts, the traditional lightweight tempo trainer is becoming somewhat of a dying breed.

Yes, carbon plated shoes cost an arm and a leg, have low durability and can cause injuries because of their unnatural rides but there’s no denying that they are fun to use for speed sessions because they make you fly.

The Rival Fly 3 is an old school, lightweight tempo trainer and competes with other non-plated lightweight trainers such as the New Balance Rebel v2, Asics EvoRide 2, adidas SL20.2 and the Hoka Rincon 3 all of which are excellent trainers.

The trend with lightweight tempo trainers this year has been towards thicker, more cushioned midsoles with softer rides. A softer foam with deeper cushioning means a more versatile lightweight trainer which can also be used as a daily trainer and not just for speed training.

The Rival Fly 3 follows the same trend. It still has a Cushlon midsole but the foam is now softer. It also has a brand new upper and outsole so version 3 is a big update.

I tested the Rival Fly 2 two years ago and I found it really firm and not cushioned enough for distances longer than 20 kilometres so I was excited to see that the Rival Fly 3 has been completely redone.

When I put the Rival Fly 3 on for the first time, the upper felt more comfortable than the previous version and the cushioning also felt more substantial underfoot.

My first run was a 20 km easy run and the ride felt similar to the 2nd version but slightly softer. I could still feel the outline of the airbag in the forefoot and there was plenty of ground feel.

On that first run, the ride of the Rival Fly 3 reminded me of the Pegasus 33 and 34 in which you could also feel the lumpy airbag under your forefoot. Those versions of the Pegasus also had Cushlon midsoles.

While the other popular Nike trainers like the Pegasus, Vomero, and Structure have all.moved on from Cushlon foam, the Rival Fly 3 is unfortunately stuck in the past and retains Cushlon as its midsole foam.

If you loved the Pegasus 36 and earlier versions, chances are high that you’ll love the Rival Fly 3 because of all the trainers in Nike’s current lineup, its ride is the most similar to the old Pegasus versions.

However if you’ve been running in other trainers with new age super foam Pebax or supercritical midsoles, you’ll probably find the ride of the Rival Fly 3 flat and slightly boring.

I did easy runs, tempo runs, interval workouts and a long run in the Rival Fly 3. I can without a doubt say that it’s best suited to short, tempo runs or speed workouts. It is however a lot more versatile than the previous Rival Fly’s.

Its new, beefed up midsole can now handle full marathon distances and it has enough cushioning to not leave your feet beat up after 40 km runs like old school lightweight trainers used to do.

It’s still not the best long run choice though because it doesn’t have any energy-saving properties like a rocker or a high drop to assist you through transitions.

On its outsole, the Rival Fly 3 has thick rubber on all the high wear areas with exposed midsole foam on its midfoot and under the centre of its heel.

The entire forefoot has rubber coverage with longitudinal grooves cut into it to help with flexibility. There is also a decoupled lateral crash pad to soften foot strikes on the lateral side.

Traction is acceptable on a variety of surfaces including light trails and grip is good in dry and wet conditions.

I’ve been happy with the outsole durability on my pair. There is minimal wear after 80 kilometres and overall, the Rival Fly 3 feels very well built.

Just like its midsole, the upper of the Rival Fly 3 feels more substantial and closer to the upper of a daily trainer. This is mainly due to a thicker, softer mesh which makes the upper feel more comfortable on long runs.

The other big change is that the eyestay and lacing area is now symmetrical compared to an asymmetrical “Vaporfly” type of setup on the Rival Fly 2.

However the flat, lightly padded tongue is still asymmetrical. It’s attached to an inner sleeve but I experienced a lot of downward tongue slide which let the lace pressure of the first row through so I made sure to wear thicker socks that protect the top of my feet.

There is also an overlay around the toe area for extra protection. This design clearly takes inspiration from the popular Vaporfly Next% 2.

My favourite update to the upper is the new laces- they are rectangular, thick and they have a premium feel to them. They are unlike any other shoelace that Nike has used.

The Rival Fly 3 fits true to size and with an accommodating, spacious fit that’s more similar to a daily trainer than a lightweight racer. Foot lockdown is excellent and the only flaw of the upper is the tongue that slides down.

When running in the Rival Fly 3, there were times during speed workouts when I wished that I had something on which was more snappy with a carbon plate that would give me more assistance.

But there were other times when I enjoyed how I was in control of the shoe and not the other way around. The Rival Fly 3 has a really natural ride with plenty of ground feel and lots of stability.

Some runners prefer to train in non-plated shoes so that when it comes to racing, they get a bigger boost from their carbon super shoe. The Rival Fly 3 is for those runners.

The Rival Fly 3 can also fill the role of a daily trainer in your shoe rotation. It has a comfortable upper, a very tough outsole and a midsole which is cushioned enough for marathon distances. It has a ride which is reminiscent of the old Pegasus versions.

Compared to other lightweight tempo trainers, the Rival Fly 3 is most similar to the SL20.2. Both have similar weights and durable outsoles but I would much rather pick the Rincon 3 or the Rebel v2 ahead of them because they have more springy, engaging, fun rides.

For the Rival Fly 4, I’d like to see ZoomX or at the very least React foam in its midsole. I’d also like a bigger Zoom Air unit to prevent its forefoot from feeling lumpy.

As editorial policy, we do not accept free samples from companies.
We purchased this pair of Nike Air Zoom Rival Fly 3 at Running Warehouse with our own money.