Ruggero is the founder and publisher of Running Shoes Guru.

After earning his degree in Business Administration in Milan, he moved to the Netherlands where he worked in companies such as Nike, and Adidas/Reebok where he expanded and cultivated his interest for running shoes. Originally a swimmer, Ruggero started running in 2009 while preparing for his first triathlon and has not stopped since. He launched Running Shoes Guru in 2009 because he could not find a reliable, independent and trusted source of running shoe reviews elsewhere on the internet. 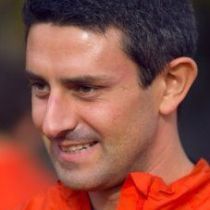 Nike Zoom Nucleus + MC Mens and Womens Running Shoes Review. The Nucleus is the only shoe that Nike presents for their Motion ... (Read more)

Nike Air Pegasus + 25 Mens and Womens Running Shoes Review. The number 25 next to the Pegasus' name lets us understand we are ... (Read more)

This image illustrates the main components of a running shoe, and can help us as a visual reference for the future. A running shoe is primarly divided ... (Read more)

When it comes to running biomechanics, there are three types of runners (click here to find out what runner type you are). No ... (Read more)

There are a few tests commonly used to determine which kind of runner you are and, ... (Read more)

Do you need a shoe that cushions your foot or one that supports it? If you want to chose the right running shoe, the ... (Read more)